Dating back 3,600 years, the Nebra Sky Disk may be the oldest representation of the cosmos ever committed to a material object. 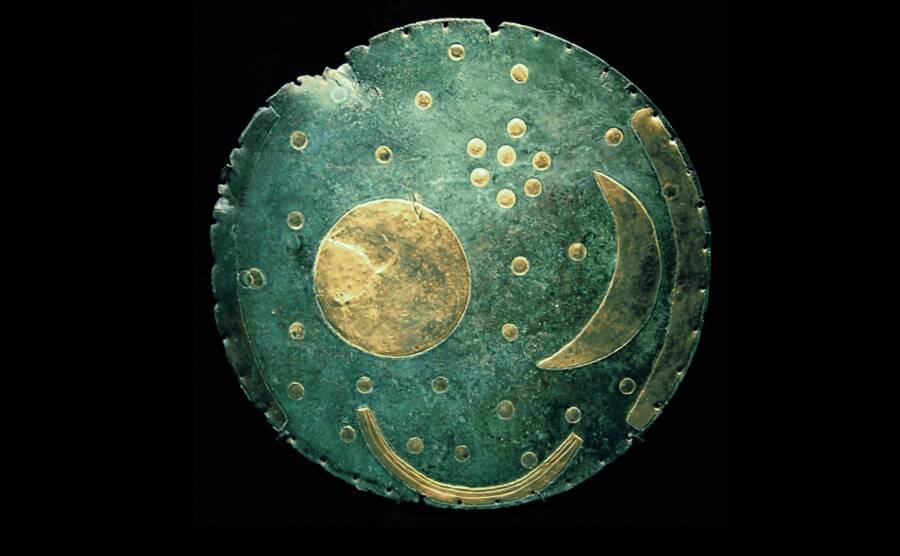 The Nebra Sky Disk is thought to be the oldest depiction of the night sky ever made by human hands. It dates back 3,600 years to Late Bronze Age Europe, and it can still be used to measure the angle of the sun at the solstices.

Ancient Europeans appear to have intentionally buried it thousands of years ago. By that point, they had used it for approximately 200 years and had even made alterations to hide certain stars and add symbols to help gauge leap months.

But, because treasure hunters illegally plundered it from a German hillside in 1999, the Nebra Sky Disk was not analyzed by professionals for several years after it left the ground, making it one of Europe’s most intense archaeological mysteries.

And some researchers argue that this artifact isn’t nearly as old as it’s thought to be.

The Nebra Sky Disk Was Illegally Removed From Germany

The Nebra Sky Disk was unearthed in 1999 on a hill in Germany called Mittelberg, near the town of Nebra, for which it is named. It was found as part of a hoard that included two axes, two swords, and a chisel. But it was not an ordinary discovery — the disk was dug up by treasure hunters. 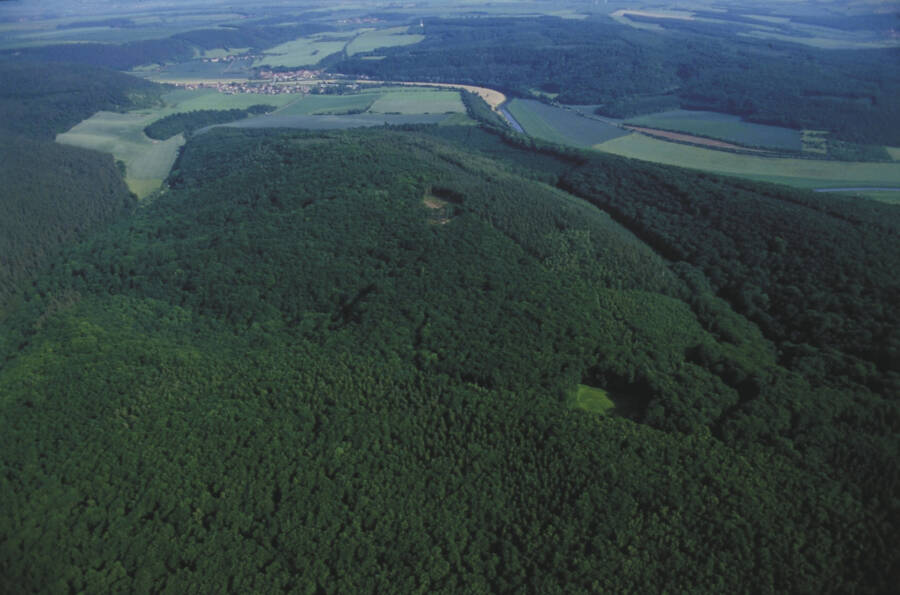 State Museum for Prehistory in HalleAn aerial view of the Mittelberg site where the disk was found in 1999.

Their crude excavation damaged the disk’s outer rim, and caused a piece of the gold circle and one of the stars to be lost. But that didn’t stop them from selling it in Switzerland to a dealer in illegal antiquities. Experts only recovered it in 2002.

“It’s such an extraordinary piece that it wouldn’t surprise any of us that a clever forger had cooked this up in a backroom and sold it for a lot of money.”

But once trained researchers took possession, they were able to bring its remarkable significance to light.

The beauty of the Nebra Sky Disk is uncontested. It bears a blue-green patina on its bronze base, while the foreground features gold leaf overlays that depict a crescent moon, either the sun or a full moon, and 32 stars, including a cluster of seven, believed to represent the Pleiades. 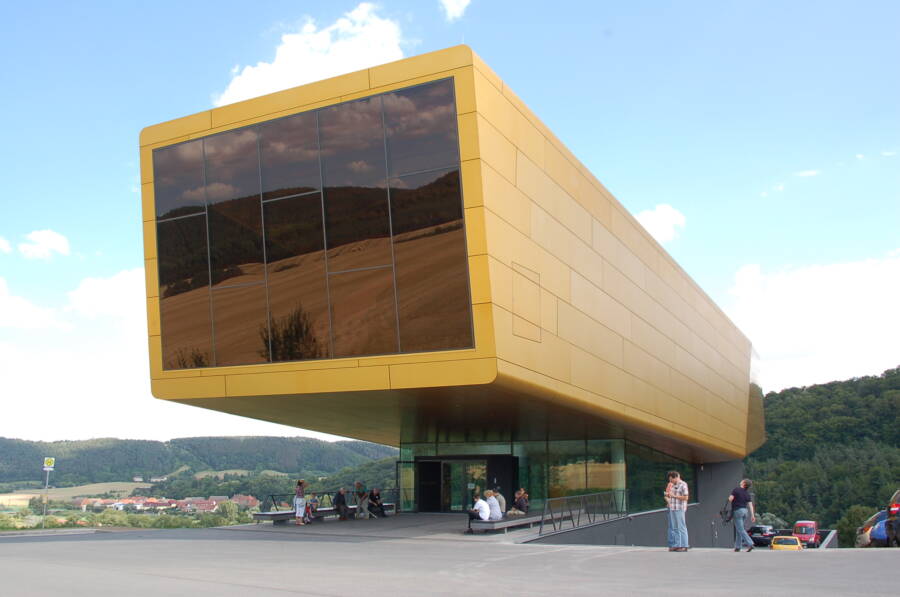 Outer bands on two sides convey the horizons, while a smaller arc at the bottom represents a “sun boat,” which Bronze Age Europeans believed ushered in the daytime. Regularly spaced holes line the outer rim, which might have helped attach the disk to a piece of cloth and carry as a standard.

Most researchers are confident prehistoric people used it as an astronomical clock that allowed them to gauge when best to plant or harvest crops by telling them when the winter and summer solstices occurred.

The theory garnered traction when professor Wolfhard Schlosser of the University of Bochum measured the angle between the disk’s golden arcs. It was 82 degrees — the same as the sun’s trajectory along the horizon at Mittelberg during the solstices.

“The astronomical rules that are depicted wouldn’t be imaginable without decades of intensive observation,” said Harald Meller, director of the State Museum for Prehistory in Halle, which houses the disk.

“Until the Sky Disk was discovered, no one thought prehistoric people capable of such precise astronomical knowledge.”

Researchers Disagree Over The Map Of The Stars

Carbon dating of a piece of birch found in one of the sword handles found alongside the Nebra Sky Disk confirmed it to be from 1600 B.C. Later analysis by the Halle Institute for Archaeological Research confirmed the disk’s age at 3,600 years, finding it was made from metals extracted from a Bronze Age mine in Austria. 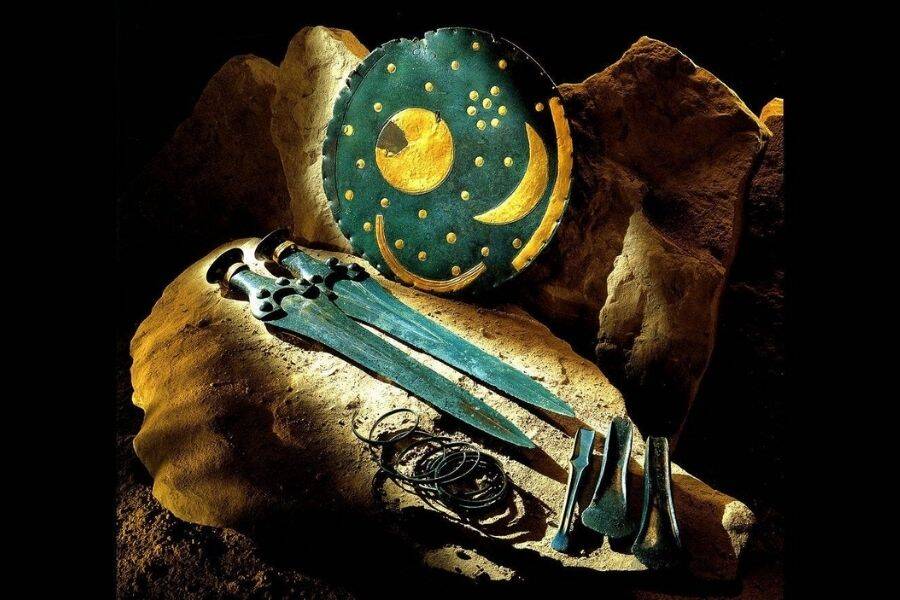 State Museum for Prehistory in HalleThe Nebra Sky Disk with the hoard of Bronze Age artifacts found alongside it.

The hoard itself is further evidence of Bronze Age provenance. Speaking with The New York Times, Maikel Kuijpers, a Dutch professor of European prehistory at Leiden University, said, “We see this actually quite a lot in the Bronze Age, these so-called depositions, or ‘hoards of bronzes.'”

But not everyone agrees with these conclusions. Rupert Gebhard, director of the Bavarian State Archaeological Collection in Munich, claims the disk is 1,000 years younger than the 3,600 years old most people believe it to be.

He bases this claim on an account given by one of the treasure hunters, who said he moved the item from another location. He also sees more similarity with Iron Age artifacts than Bronze Age ones in the disk.

“This site at the Mittelberg is obsolete,” Gebhard said. “We think it’s necessary to look around to a new site.”

Wherever the science leads, however, one thing is sure to Wolfgang David, executive director of the Archaeological Museum Frankfurt:

“This controversial discussion of questions that have not yet been finally clarified will trigger new investigations, especially in Halle, and motivate research to make progress.”

After learning about the Nebra Sky Disk, read about astronomers creating the most detailed 3D map of our galaxy ever. Then, unlock the mysteries of the Georgia Guidestones.