Throughout his storied yet tragic life, Nikola Tesla invented hundreds of devices and processes that changed our world, from the Tesla coil to the induction motor. 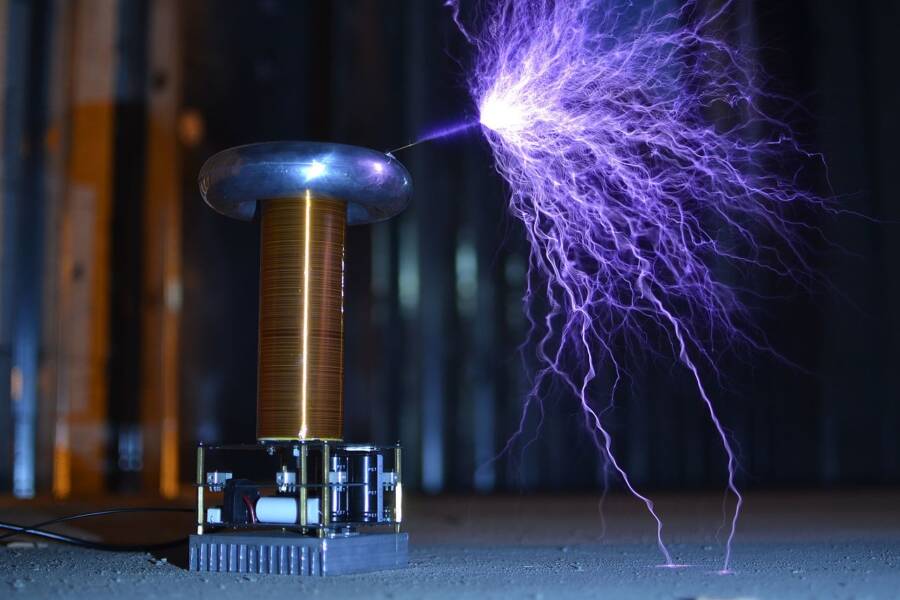 Among the most famous of Nikola Tesla's inventions, the Tesla coil forms the basis of much of his work.

Tesla was highly intrigued by high-frequency electricity. He knew that light was electricity — vibrating at a high frequency. And Tesla believed he could harness it.

The problem was that the higher the frequency, the more unstable the equipment. Tesla had tried building rotary generators that could run at high speeds, but they fell apart at 20,000 cycles per second.

Thus, the Tesla coil was born. It consists of essentially two coils that bounce energy back and forth, creating extremely high frequencies and voltages.

They could be used to send radio messages or to power a lightbulb from across the room. Wikimedia Commons 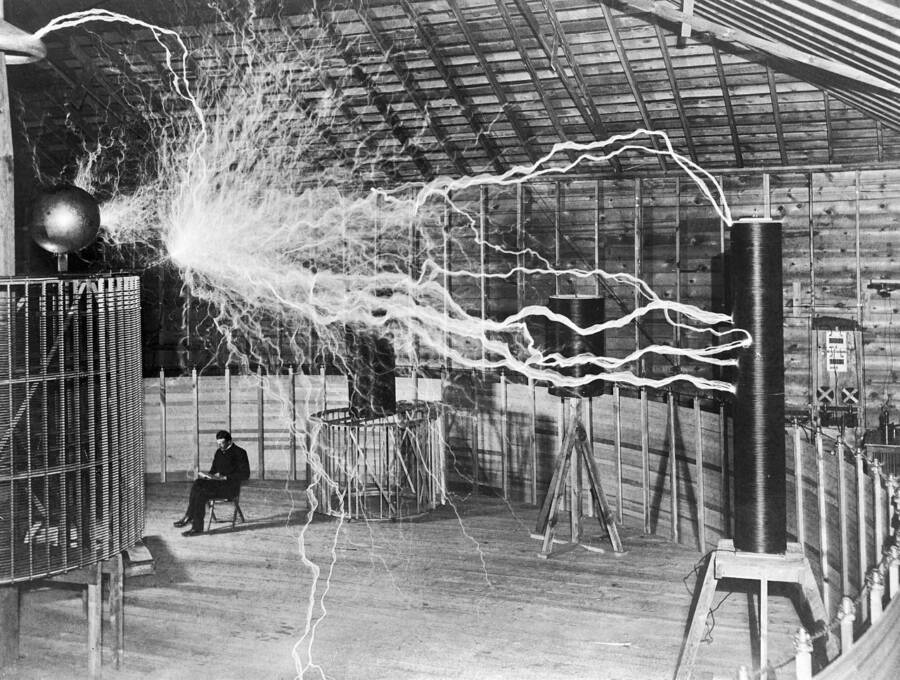 Tesla demonstrated this technology to shocked audiences by lighting light bulbs wirelessly. The transmitter could even light a field of light bulbs 1 kilometer away. Wikimedia Commons 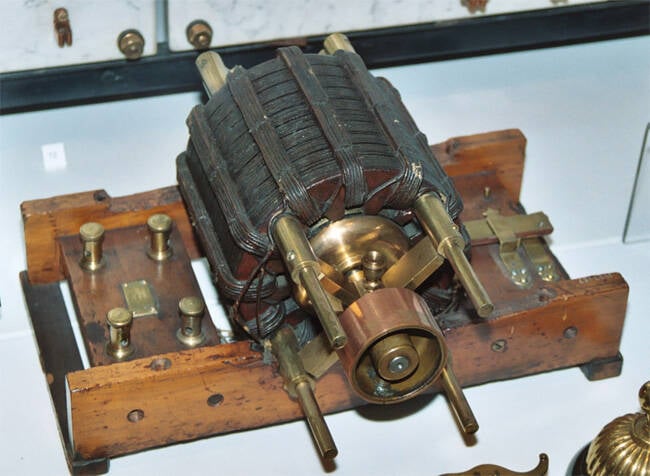 Some of Nikola Tesla's inventions were theoretical or existed only as patents. But the induction motor still gets used in devices today, like vacuums, blow dryers, and power tools.

This invention is significant because it improved energy generation and made the long-distance distribution of electricity possible. British Science Museum 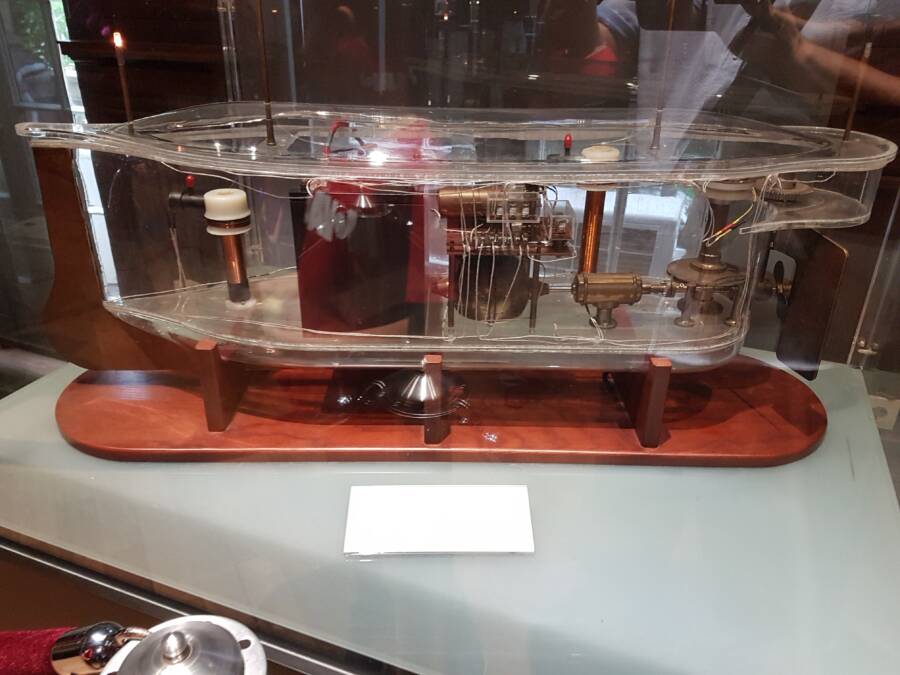 At an 1898 exhibit at Madison Square Garden, Nikola Tesla astounded the public by debuting a radio controlled boat.

People at the time couldn't comprehend what they were seeing. In fact, Tesla had initially been denied a patent because his idea seemed so incredible. The inventor boasted: "When first shown ... [the boat] created a sensation such as no other invention of mine has ever produced."

Although papers quickly speculated that his technology could be used for warfare, Tesla believed it was actually the birth of robotics, a field which he hoped could take over much of hard labor, freeing up human workers to focus on other things. Wikimedia Commons

Nikola Tesla was chosen over his rival, Thomas Edison, to create the hydroelectric power generator at Niagara Falls.

Of the 12 patents used to construct the hydroelectric power plant, nine belonged to Tesla. The plant began to generate power in 1895. 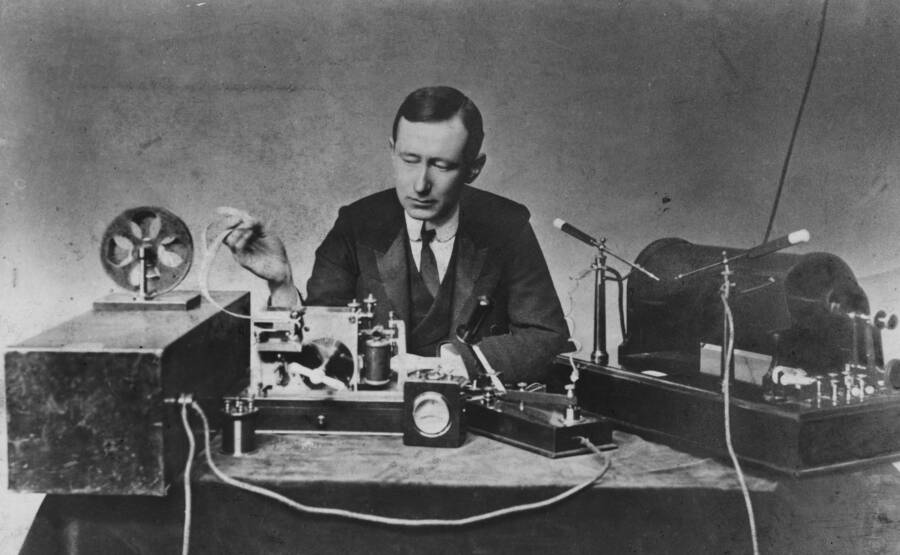 Guglielmo Marconi, pictured, is largely credited with inventing the radio. However, Tesla beat Marconi to the punch — he just happened to run into some bad luck.

Tesla had realized that Tesla coils had another purpose: They could transmit messages. But just when he was about to try it out in 1895, his lab burned down.

At first, Tesla didn't see Marconi as a threat. "Marconi is a good fellow," Tesla once said. "He is using 17 of my patents."

But Marconi would win the day. He transmitted signals across the Atlantic Ocean in 1901. The U.S. patent office awarded a patent for the invention of the radio to Marconi, despite denying him multiple times because he was using Tesla's technology.

The U.S. Supreme Court would later uphold Tesla's original patents —but not until six months after his death in 1943. Wikimedia Commons 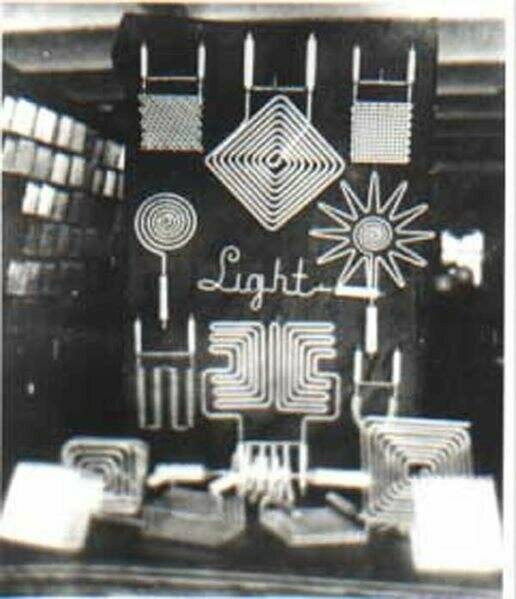 Did Nikola Tesla invent neon lit signs? The invention is actually credited to Frenchman Georges Claude, who harnessed the technology in 1910. But in 1893, Tesla was experimenting with something extremely similar.

Tesla had access to "Geissler Tubes". Basically, these were glass tubes containing a gas like argon, with electrodes on each side. When stimulated, the gas would light up.

Tesla had several of these in his lab. One day he was experimenting with his Tesla coils when he noticed the tubes lighting up. Tesla realized that he could power them wirelessly. He displayed this technology (pictured) at the 1893 Chicago World Fair.

Although his invention looks like neon lights, they were not neon lights. They were wireless and used gases other than neon. Public Domain 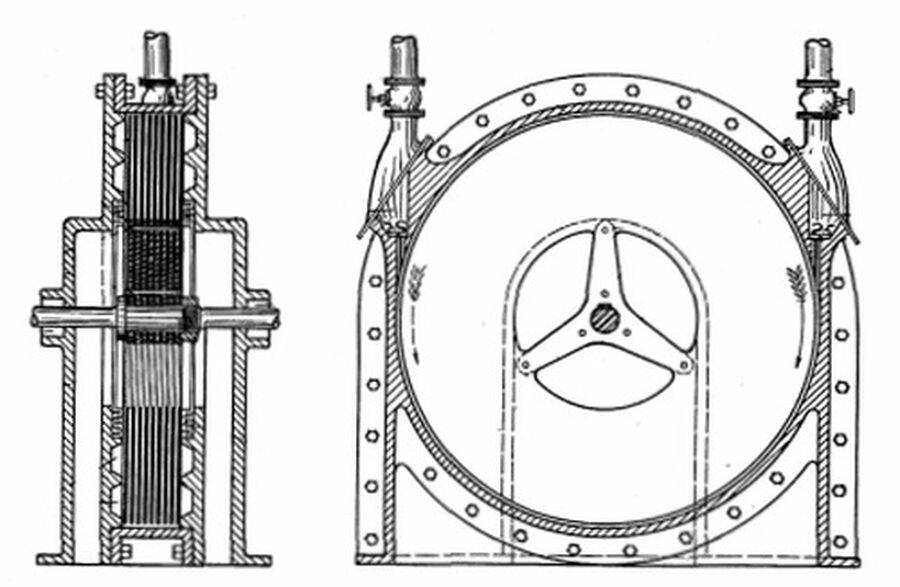 In 1913, inspired by the piston engine, Tesla invented his own turbine.

Turbines at the time used blades, while Tesla's used discs: It was more fuel-efficient.

Although the Tesla Turbine has had little practical application, Tesla had big dreams for it. He believed it could be utilized in the "great terrestrial power plants of the future" to create geothermal energy.Wikimedia Commons 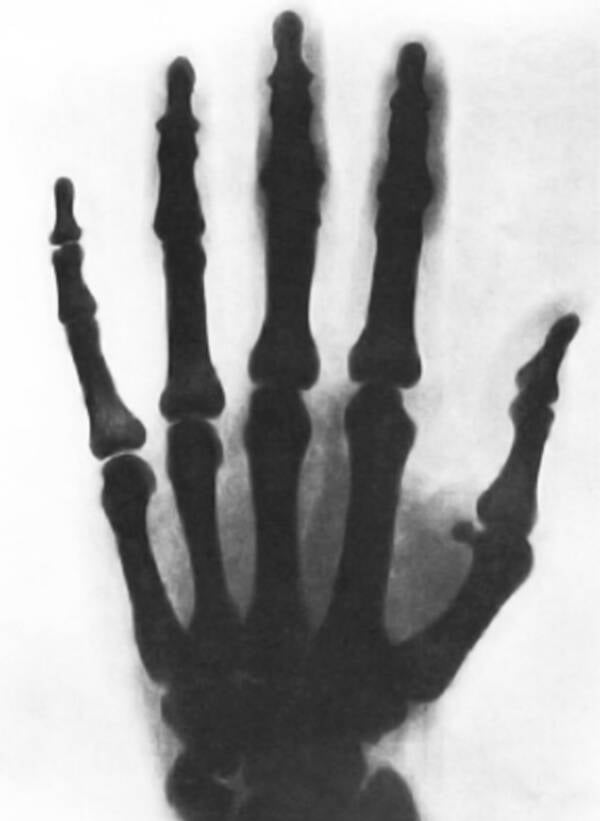 Although X-rays were invented by Wilhelm Röntgen on Nov. 8, 1895, Nikola Tesla had also been experimenting with what he called "shadowgraphs."

In the fall of 1894, Tesla became intrigued by damage to photographic plates during experiments to study radiant power on phosphorescent bodies. His early investigations were deterred, however, by a fire in his lab.

Even so, it's likely that Tesla took the first X-ray photograph in the United States. While trying to photograph his friend Mark Twain, he captured only the metal screws of the camera lens.

When Röntgen unveiled his invention, Tesla realized he'd been working on something quite similar. He sent Röntgen his own "shadowgraph" images. Röntgen wrote back: "These pictures are very interesting. If only you would be so kind as to disclose the manner in which you obtained them." Wikimedia Commons 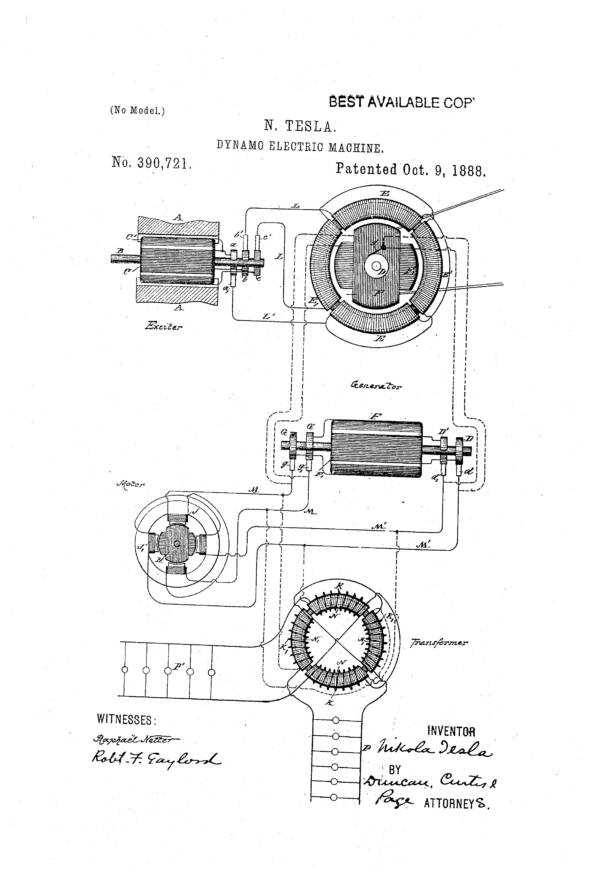 One of Nikola Tesla's most enduring inventions is alternating current (AC). Today, this form of electrical power is still used to deliver power to homes and businesses —as well as home appliances like refrigerators.

Tesla's idea for AC power was a direct contrast to his mentor-turned-enemy Thomas Edison, who had invented direct current (DC) power.

When Tesla worked for Edison, the latter promised him $500,000 if he could fix DC power. Tesla's AC power worked much better, leading Edison to renege on his offer. Thus, a rivalry was born.

DC power is still in use today too, like in a battery-powered flashlight. Wikimedia Commons 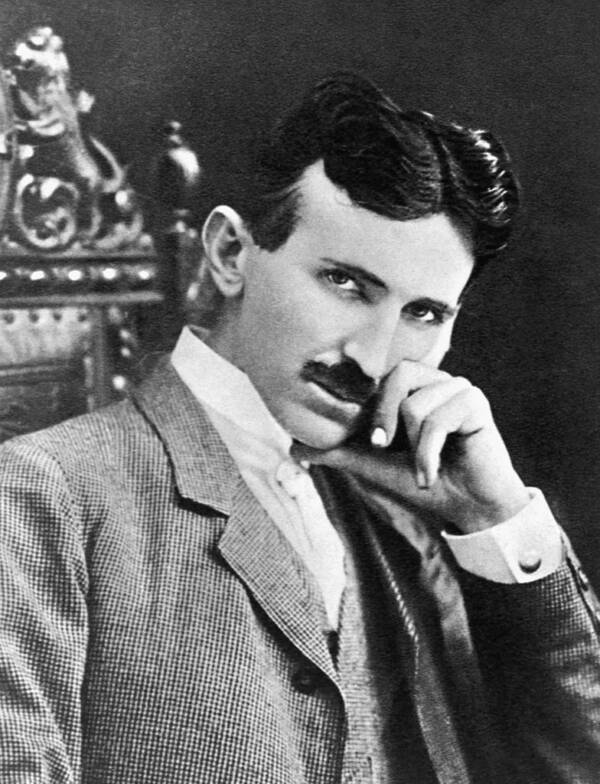 Of all Nikola Tesla's inventions, one he never actually built has has cast an outsized shadow on his legacy. Tesla described a "death ray" which could knock enemy airplanes from the sky.

Tesla didn't think the death ray would be used to inflict violence, however. On the contrary, he imagined it as a tool of peace. Tesla thought that if every country in the world had a "Chinese Wall" it would eliminate the need for warfare.

This may sound far-fetched, but Tesla's plan had at least one modern day admirer. President Ronald Reagan's "Strategic Defense Initiative" was a theoretical missile defense system that could protect the nation from attack.

Although Tesla described laws of physics “no one has ever dreamed about" his death ray seems to have lived only in his imagination. Wikimedia Commons

In 1908 — about a century before the iPhone — inventor Nikola Tesla mused about creating a device "no bigger than a watch" that would allow someone to hear "music or song [or] the speech of a political leader" and transfer "any picture, character, drawing or print."

Today, we take the ability to send a photo to our grandparents for granted. But in Tesla's time, it was imagining the impossible.

So, what did Nikola Tesla invent with his ambitious mind? In his life, the Serbian-born inventor obtained around 300 patents for his designs. But he's best known for inventing alternating current (AC) — which powers homes and businesses, even today — and the induction motor, which is a key component of modern devices like vacuum cleaners and hair dryers.

Some of Nikola Tesla's inventions were overshadowed by the work of other scientists. He experimented with "shadowgraphs" around the same time that Wilhelm Röntgen invented the X-Ray. Tesla's work with wireless lights looks like a precursor to neon-lit signs.

And, heartbreakingly, Tesla's work on the radio was dwarfed by Guglielmo Marconi's successful 1901 radio message — even though Marconi used Tesla's technology. In fact, Tesla only got his due for radio six months after he died, when the U.S. Supreme Court deemed Marconi's patents invalid and posthumously awarded them to Tesla.

But other Tesla inventions truly astounded the public. His idea for a radio-control boat seemed so incredible at the time that he was initially denied a patent. But then, when Tesla displayed the boat at Madison Square Garden in 1898, people couldn't wrap their minds around what they were seeing — to the inventor's delight.

All of Nikola Tesla's inventions looked toward the future. There's a reason why people call him the "man who invented the 20th century."

After reading about these Nikola Tesla inventions, learn about Nikola Tesla's death and his missing files. Or, see why he believed that the numbers 3 6 9 could change the world..