This prehistoric whale ancestor was about the size of a city bus and would have been the most fearsome predator in its ecosystem. 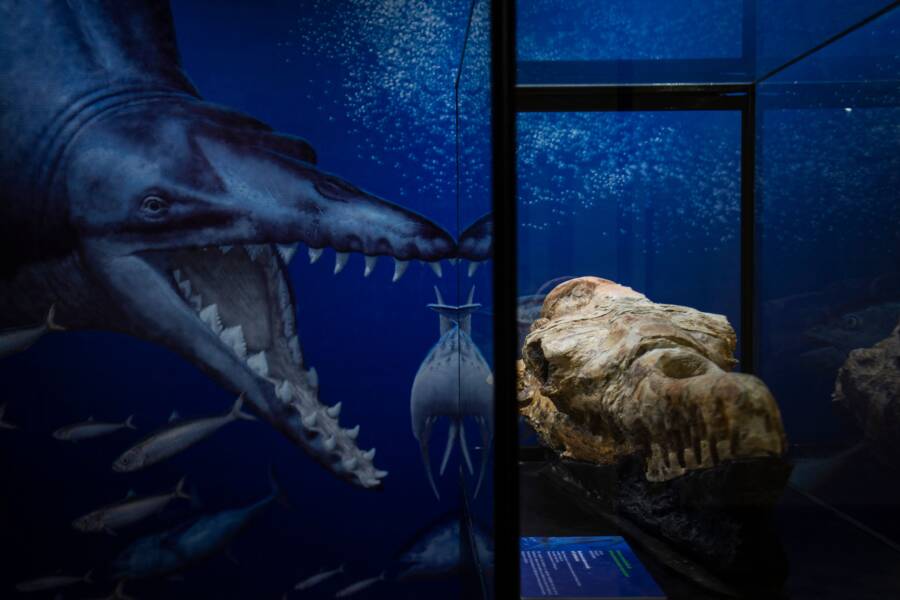 ERNESTO BENAVIDES/AFP via Getty ImagesThe fossil remains of a Basilosaurus skull found in Ocucaje, Peru, are displayed at the National University of San Marcos.

Paleontologists digging in Peru’s Ocucaje Desert have made a monster of a find: the complete skull of an “archaic” whale that once reigned at the top of the prehistoric food chain.

“The most incredible thing is that the skull is in a very good state of preservation,” raved Rodolfo Salas-Gismondi, chief of paleontology at Peru’s National University of San Marcos (UNMSM), at a fossil presentation ceremony announcing the find.

Salas went on to describe it as a first-rate predator that was at the top of its food chain at the time, likely feeding on fish and penguins. He told Reuters, “It was a sea monster. When it was searching for its food, it surely did a lot of damage.”

Paleontologists led by Mario Urbina first came across the 36-million-year-old fossilized skull at the end of 2021 in Peru’s Ocucaje Desert, 215 miles south of Lima, in the Otuma rock formation.

“This finding is very important because there are no other similar specimens discovered in the world,” Urbina explained.

Salas seconded Urbina. He said: “This is an extraordinary find because of its great state of preservation. This animal was one of the largest predators of its time.” 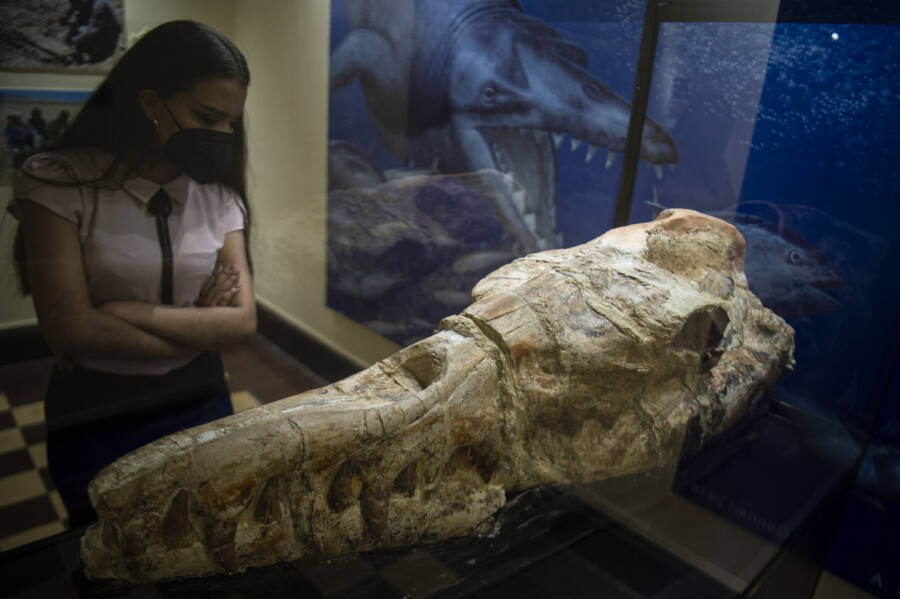 ERNESTO BENAVIDES/AFP via Getty ImagesAnother angle of the ancient whale skull, which paleontologists raved was “in a very good state of preservation.”

The whale’s “time” would have looked very different from our own. Today, the Ocucaje Desert is an expanse of flat, brown rock. But millions of years ago, it was a shallow ocean packed with sea creatures. Paleontologists have found other fossils there, including four-legged dwarf whales, dolphins, and sharks.

But this whale was likely at top of the ocean’s food chain. Its toothy skull is four feet long, suggesting that the whale itself once measured about 39 feet in length. Paleontologists believe it’s part of the basilosaurus family, a categorization that means “king lizard.”

In life, it likely looked something like an enormous snake, slithering through ocean depths, but with flippers up near its head. Paleontologists suspect that it sank to the bottom of the sea floor when it died, where it was buried by sediment and preserved for millions of years.

“Back during this age, the conditions for fossilization were very good in Ocucaje,” Salas explained.

Like other cetaceans, the Ocucaje Predator likely evolved from mammals who lived on land. According to Live Science, over millions of years they became semi-aquatic before fully transitioning to life in the water some 55 million years ago.

As such, this find is an especially significant one — it can help paleontologists better understand life (and death) in the ancient sea. 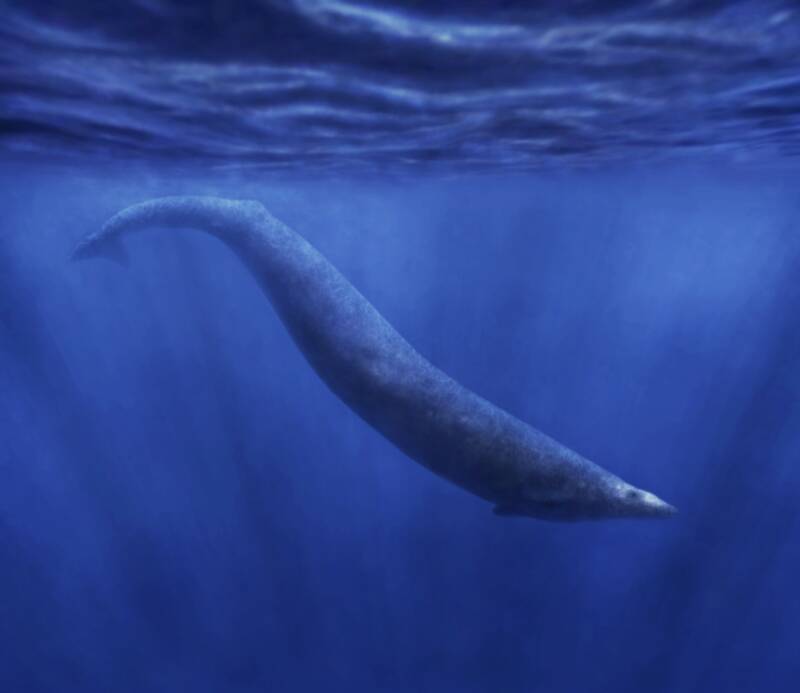 Dominik Hammelsbruch/Wikimedia CommonsA rendering of what an ancient basilosaurus may have looked like.

At the fossil presentation, Niels Valencia Chacón, the director of the Natural History Museum at the university, also highlighted the two decades of work by Salas and Urbina. Valencia said that their efforts have helped UNMSM to have one of the best fossil collections in South America.

“This sample represents a view to the past,” Valencia said, adding, “We think that biodiversity is only a number of species, but many times it is not necessarily true, because biodiversity has many components, one of which is the history of biodiversity.”

The impressive “sea monster” skull will be exhibited at a temporary display called “New Basilosaurus of Ocucaje” at the Museum of Natural History in Lima.

After reading about the “sea monster” discovered in Peru, learn about the Titanoboa and the Coelacanth, two other enormous predators of the prehistoric era.