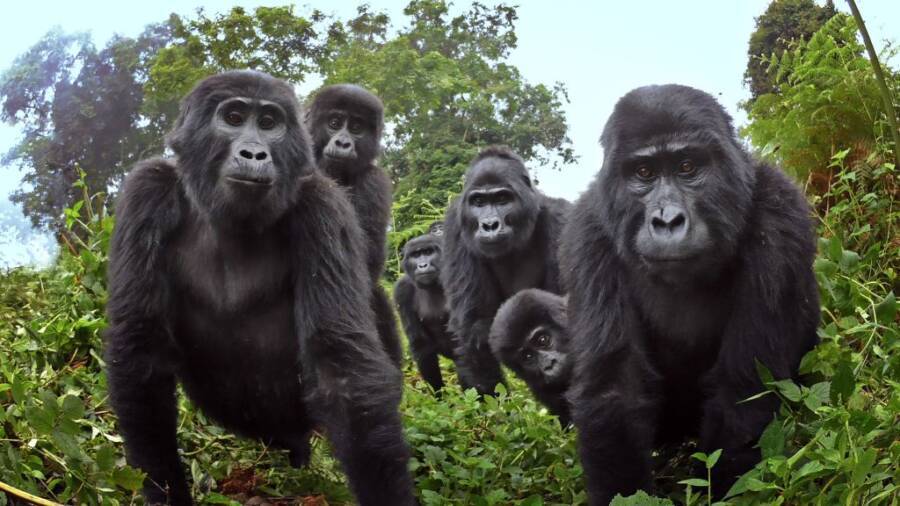 Primate behavior can often seem incredibly human, and in 2020, it was discovered that wild mountain gorillas engage in group singing just like we form choirs.

This odd news was rather historic on its own as it was the first time that gorillas were captured singing on film, but it was also impressive because of how that footage was shot: with a robotic gorilla spy.

It is difficult to get an accurate assessment of how mountain gorillas interact with each other when a human observer is present because their presence prevents the gorillas from acting naturally.

To get around this, a PBS documentary crew built a life-like robotic “spy” gorilla to infiltrate the group instead. While that’s a weird news story in itself, it only gets stranger from here.

More than 50 different robotic animals were created for the Nature: Spy in the Wild 2 series, including a grizzly bear, koala, seal, polar bear, and more. These robotic creatures were meticulously crafted in order to accurately mimic the behavior of a real animal. In the case of the gorillas, researchers were sure to program the robot with proper eye communication.

A clip from the PBS series showing the gorillas chorusing at suppertime in Uganda.

“Eye communication is very important amongst gorillas,” said producer Matt Gordon. “You’ll see in the footage in the first episode; the gorillas come straight over to our spy gorilla and peered right into its eyes. So we made sure that the gorilla had the most amount of detail put into the face.”

Furthermore, the robotic gorilla couldn’t appear threatening or the group of wild primates wouldn’t accept it. Engineers made sure that when approached by the leader of the gorillas, known as the silverback of the tribe, the robot would appear submissive. For instance, as the silverback sniffed the air around it, the robot averted its eyes.

The animatronic ape was also able to beat its chest, which led to an endearing moment of playful interaction with a baby gorilla, which “would be difficult to see with traditional filming techniques.”

As seen in the footage, the robot was warmly welcomed into the group and it caught older gorillas singing at dinner — and farting continuously.

While an audio recording of singing gorillas had already been captured in 2016, PBS’s robotic spy caught them doing so on high-definition video for the first time. As such, this odd news from April further cements the notion that new technology can capture phenomena that have long existed but that we just couldn’t see.