Also known as the trembling giant, the enormous clonal colony of quaking aspen trees named Pando stands as one of the largest living things on planet Earth.

As autumn arrives in the Fishlake National Forest of Utah, a quaking giant comes to life in a splash of brilliant yellow. Fall is the season of Pando.

Technically, Pando is always there; after all, it’s not possible to move 47,000 trees. But fall is the season in which each one of the nearly identical aspens that make up Pando begins to turn color. 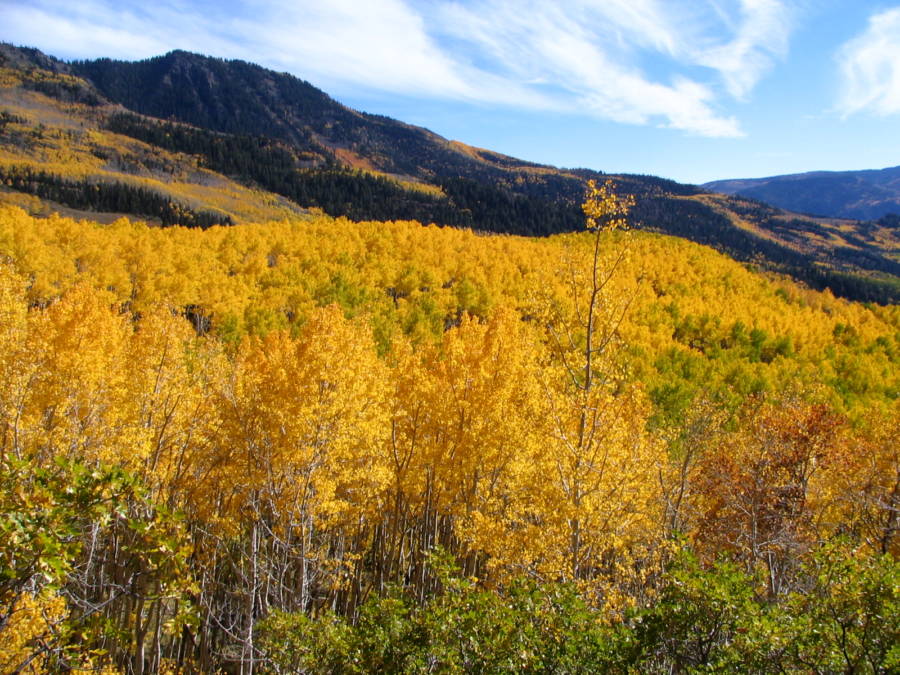 Wikimedia CommonsThe Pando clonal tree colony in the fall, at the peak of its majestic display of color.

The 107 acres of forest create an unusually vivid pattern that stands out against the surrounding hillside. When the autumn breeze whistles through the trees, their leaves rustle and shiver, giving the forest the look of a living, breathing creature.

This same beautiful display happens once every year, just as it has for the last 80,000 years.

Pando, The Trembling Giant of Utah 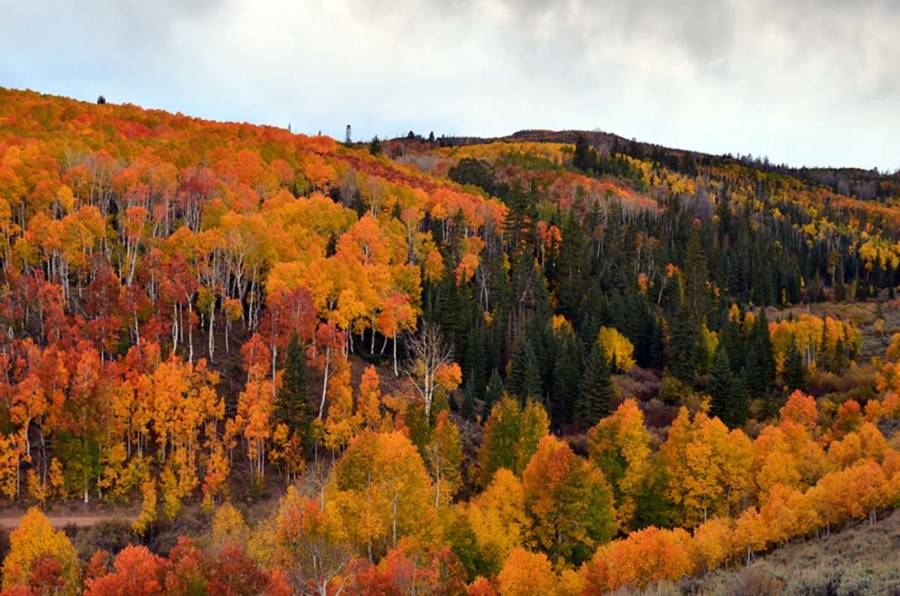 Forests that old are rare — but Pando is more than a group of trees that have withstood the test of time. Pando is actually just one tree; all the aspens of Fishlake National Forest are part of the same organism.

Its name is Latin for “I spread” — which is exactly what Pando has done for millennia. Genetic testing has helped confirm that each tree in the forest is the same organism reproduced over and over again with only slight genetic variations. 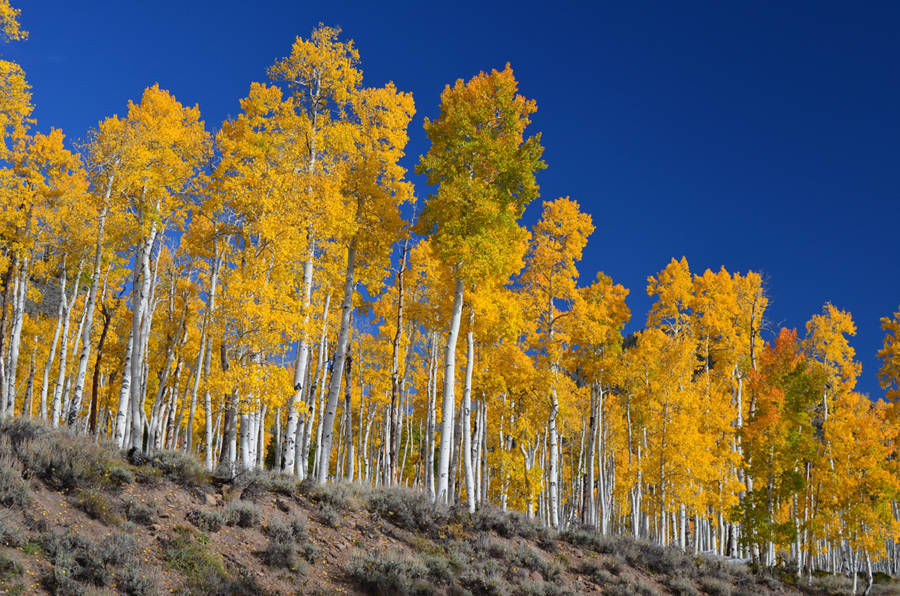 Wikimedia CommonsThe edge of Pando, a line of aspens like sentinels guarding the forest.

These quaking aspen trees can reproduce in the traditional way with seeds and pollination from insects — but when conditions are tough, the Pando colony relies on a different approach.

Instead of spreading seeds, the clonal grove extends its roots in a process called “suckering.” New “trees” shoot up alongside the old ones, looking like new seedlings — but they actually belong to Pando’s extensive root system, which is why the different trees present nearly identical appearances. They’re essentially clones of the existing foliage.

Scientists believe that every tree in the Pando colony shares the same root system. The result is one of the largest and oldest living organisms on earth and a remarkably resilient forest. Pando’s deep, connected roots have allowed it to survive millennia of fires, droughts, climate shifts, and diseases. 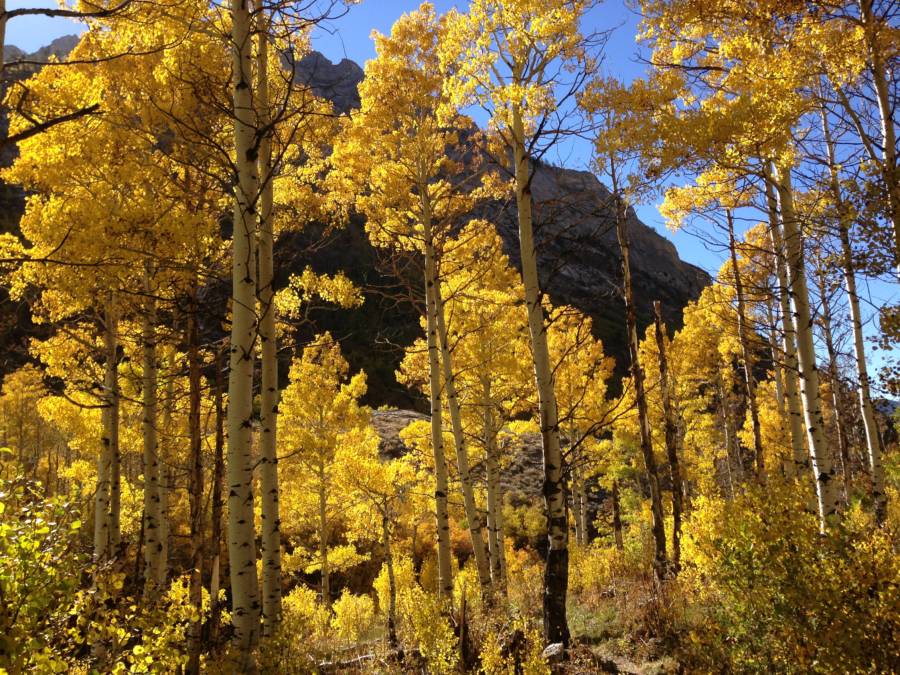 In terms of surface area, the clonal grove comes in second after fungal mats in Oregon that spread out over 1,000 acres (Pando covers a more modest 107 acres).

Scientists aren’t sure how this clonal colony, called the Trembling Giant, grew to be so old and so large. Specimens can grow up to 82 feet high and live to be 130 years old. Though the original tree that gave birth to the forest’s root system is almost certainly dead, its copies live on — and on. 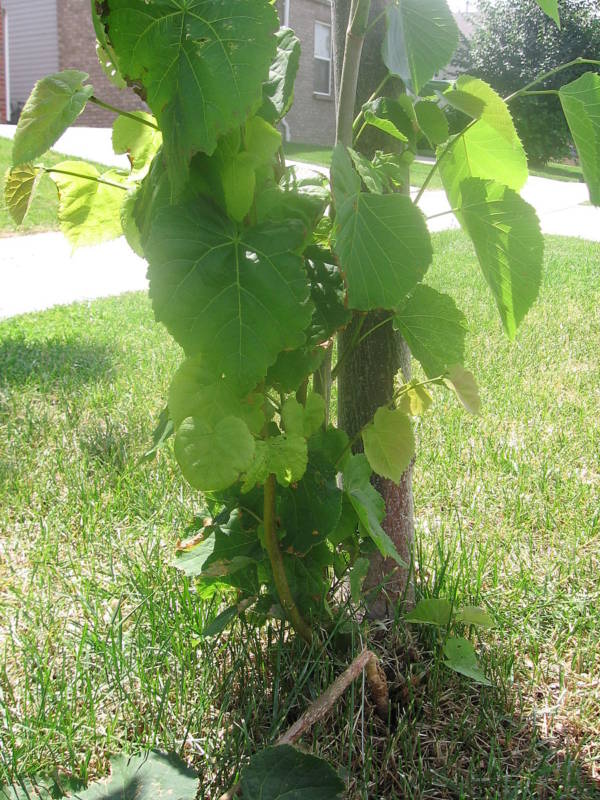 Wikimedia CommonsAt the base of this young plant, a suckering root protrudes from the ground, ready to form a new plant. This is the same process that takes place in Pando.

Good genes have helped: the suckering roots generally only give birth to new shoots in older parts of the forest, which means young trees will be near genetic copies of successful older trees — not untested new growth.

But now, as is the case with so many natural wonders in the present day, Pando faces environmental dangers that threaten to put a halt to new growth and bring an end to the world’s most massive organism. 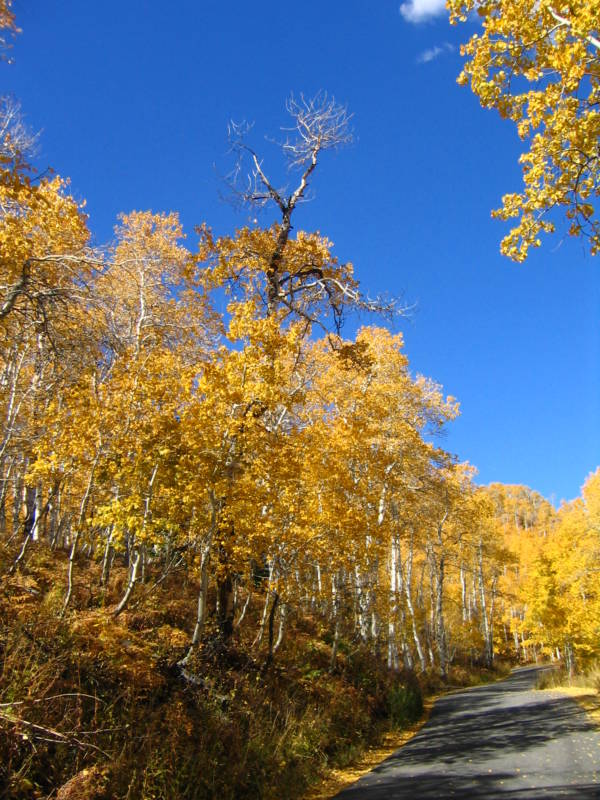 Wikimedia CommonsPando’s aspens as they turn gold in October.

It’s not unusual for Pando to fall victim to the dangers any forest faces, like pests and drought. Sick trees die and fall to decompose on the forest floor, where they feed new growth, as they have for tens of thousands of years.

But a threat to Pando’s root system, the organism’s heart, changes everything. Today, newer trees aren’t surviving long enough to grow into full-fledged adult trees. Scientists believe the problem is overgrazing: deer and elk are gobbling up the tender shoots before they can mature.

Conservation work on Pando started in 2010, and efforts were redoubled in 2016 and 2017. Fences have been erected to keep animals away from new sprouts, and some trees, shrubs, and brush have been cut back in order to encourage new growth. 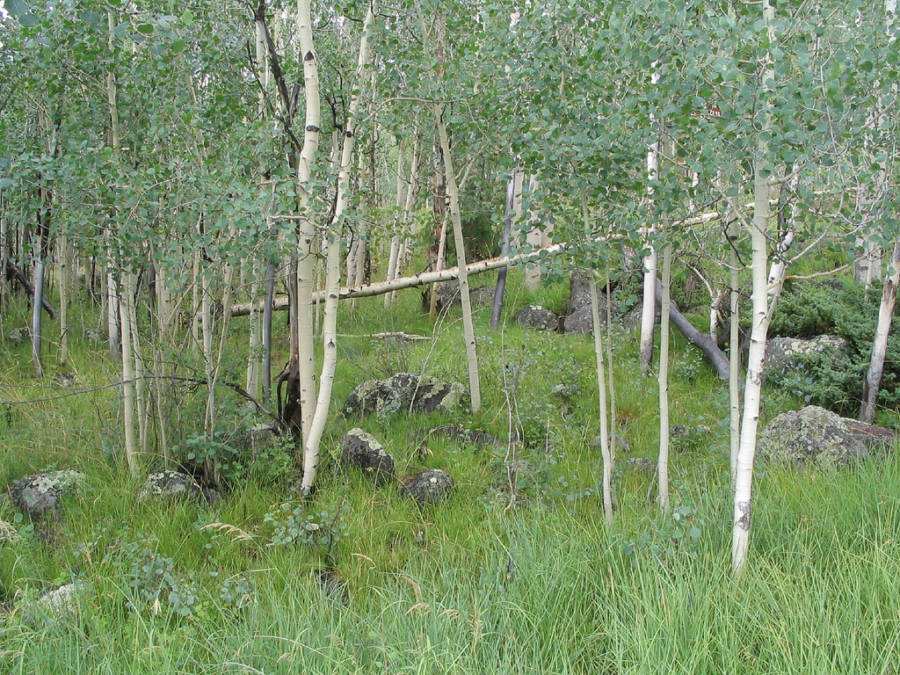 Ken Lund/FlickrPando in the summer when everything is green and lush.

Teams monitor 27 distinct areas of the clonal colony to see how they regenerate over time. So far, fences have proved the most effective defense — a hopeful sign for not just Pando but also other aspen groves that have been threatened by hungry herbivores in recent years.

What The Future Of Clonal Colonies Means For Science 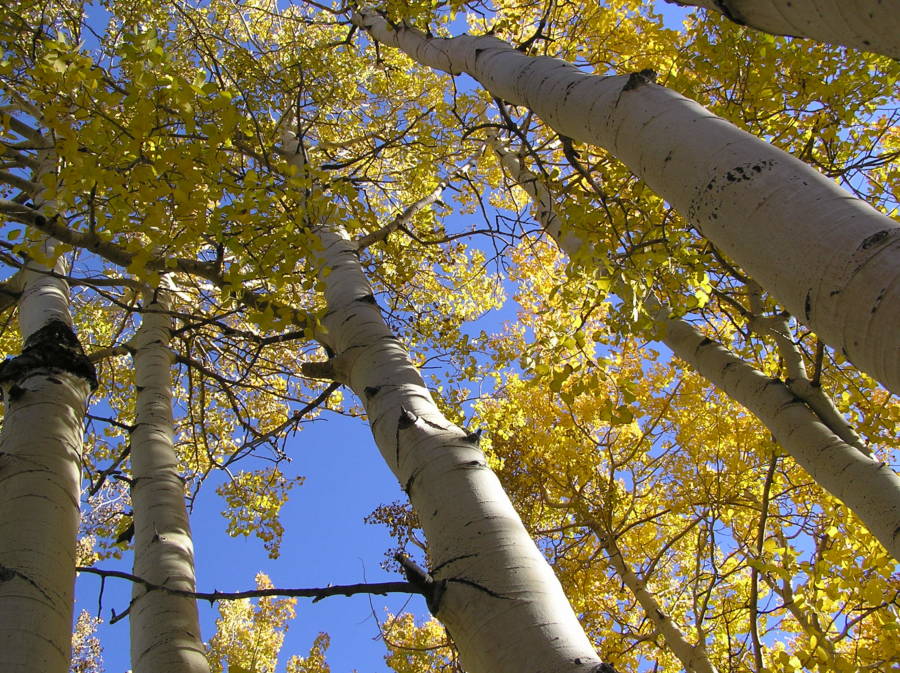 Wikimedia Commons An insider’s view of what the Pando clonal colony looks like.

The scientific interest in saving Pando stems in part from the many research questions clonal colonies stand to answer.

How do organisms survive for such a long period of time? How did Pando get this way? What environmental factors led to such a huge root system? Can Pando survive global climate change? All of these questions require decades or even centuries of close study, but the hints of answers are there. 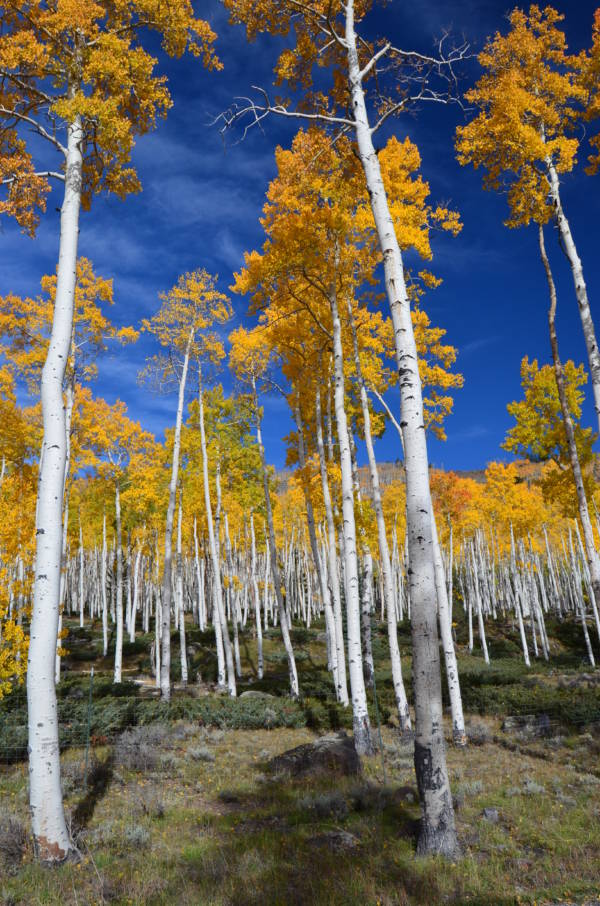 John Zapell/U.S. Forest Service via FlickrPando in the fall. October 2012.

Current conservation efforts also give scientists a chance to practice. Pando, a microcosm of larger forests, can teach us how to implement herbivore control over hundreds or thousands of acres.

One thing is certain: the Pando clonal colony is a national treasure. These trees serve as a sentinel to prehistory, and they play a vital role in the area’s ecosystem. Small mammals and birds use quaking aspens for shelter. Larger mammals munch on the leaves for food.

The beautiful yellow canvas in October creates a treat for the eyes. All of this is thanks to 80,000 years of good genes.

For more living wonders like the Pando, read up on Methuselah, the oldest tree in the world. Then, read about the manchineel tree, the deadliest on Earth.