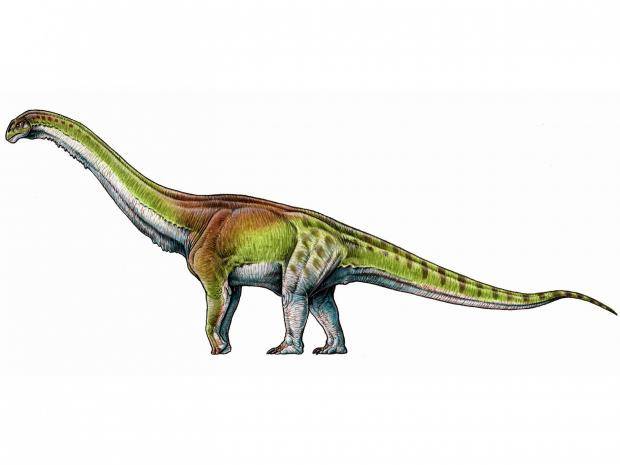 Aureliano Hernandez — an Argentinian shepherd — saw a bone sticking out from under a rock in 2013.

Paleontologists were contacted, but Hernandez passed away before they had a chance to make it out to the farm where he worked. Aureliano would never know, then, that his discovery was actually the thigh bone of the largest dinosaur ever uncovered.

Now, four years later, a team of scientists from the Egidio Feruglio Paleontology Museum has published its official account of the creature along with its name:

I know scale is really important in science – here's me next to the Patagotitan mayorum femur pic.twitter.com/7Ii7AGw0Hv

The name comes from the Patagonia region where it was found, the Greek word titan (meaning large), and the last name of the family who owns the farm where the bones were discovered.

It looked like the thigh bone of a titanosaur, but there was no way titanosaurs were that big, researchers thought.

They initially estimated that the creature to whom the thigh belonged would have been 130 feet long and weighed around 77 tons — which is like 14 elephants, a seven-story building or two semi-trucks.

The largest dinosaur ever discovered has a name; Patagotitan mayorum. For scale imagine 14 Elephants glued together. https://t.co/0Jkr7EAvEL pic.twitter.com/trkp3e0qTy

The Tyrannosaurus Rex, in comparison, was only about 40 feet long and weighed nine tons.

The Patagotitan won’t be taking T-rex’s spot in Hollywood anytime soon since the long-necked vegetarians were probably pretty chill.

“I don’t think they were scary at all,” Diego Pol, a co-author of the study, told Fox. “They were probably massive big slow-moving animals.”

After their careful analysis, researchers found that their initial estimate had been a bit off. The animal was actually more like 69 tons.

Which is still an insane 10% larger than the previous record-holder: Argentinosaurus (because apparently, all the humongous dinosaurs liked to hang out in Argentina).

This time, they’re pretty confident in their numbers.

““We have a decent idea how well the various methods for estimating dinosaur body mass work, and they tend to agree well enough most of the time,” John Hutchinson from the Royal Veterinary College, told The Atlantic. “Even taking into account the uncertainty of those methods, Patagotitan comes out as a 60- to 80-ton behemoth. And nothing else we know of yet comes very close.” 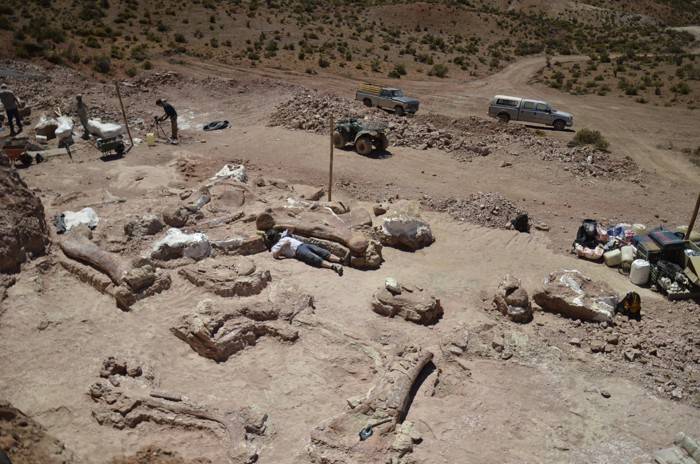 Working on that same farm, paleontologists eventually uncovered more than 200 bones from six different Patagotitans (they had to remove part of a hill to do so). They dated back to about 100 million years ago.

“The most amazing moment for us was realizing that the dinosaur is not only large, but also more complete than any other titanosaur,” Luis Carballido, the expedition’s leader, said.

They’ve found other titanosaurs in the past, which are apparent relatives to this new guy, but they’re still unsure what evolutionary prompts led to the extreme girth difference. It would be like if your second cousin was born the size of a Mini Cooper.

“There was one small part of the family that went crazy on size,” Pol said.

They think it could have had something to do with rising temperatures at the time, which caused an explosion in flowering plants. However it came to be, though, the Patagotitan has a pretty firm hold on the giant creature title.

“Maybe someone can find a bigger one,” Carballido said. “But I feel like maybe this is the limit.”

After learning about the world’s biggest dinosaur, check out the dinosaur mummy unveiled with its skin and guts intact. Then, learn about the bizarre indian lake where skeletons wash ashore.