Inside “Peace Village,” The Ghost Town On The Border of North and South Korea

South Korean observers say that the North Korean village of Kijong-dong is nothing more than a fake town built to spread propaganda. The buildings are believed to be empty shells with painted-on windows.

Kijong-dong looks like a typical village from afar, with a water tower, power lines, clean streets, and lights in the windows of its plentiful buildings. But a closer look at “Peace Village” reveals that it doesn’t have a single resident — and it never has.

Located in the Demilitarized Zone (or DMZ) that separates North and South Korea, Kijong-dong opened its fake doors in 1953 after an armistice ended the Korean War. Experts believe that the Peace Village, which is also referred to as a “Propaganda Village,” is just one of many fake towns in North Korea. 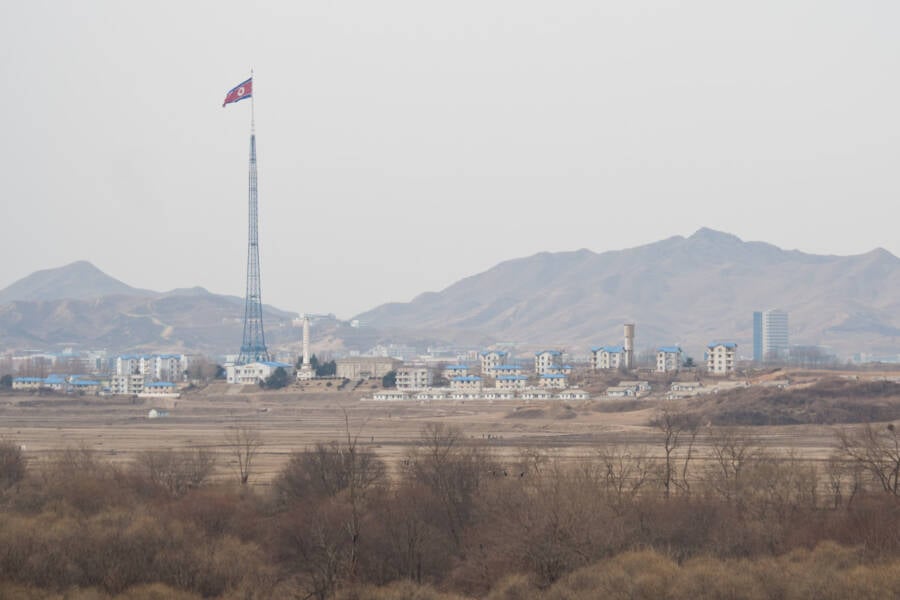 FlickrBuilt in 1953, the fake city nicknamed “Propaganda Village” sits empty — while North Korea claims it has over 200 residents.

The hermit kingdom of North Korea has a reputation for projecting a fabricated image of prosperity and economic success. Using this smoke-and-mirrors approach, the North Korean government constructed Kijong-dong to trick South Koreans into believing that Northerners were living in luxury.

To this day, North Korea maintains that this ghost town is full of life, but a closer look reveals that it’s more like an abandoned Hollywood set than a village.

North Korea constructed the Peace Village of Kijong-dong from scratch in 1953 at the Korean War’s unofficial end. The bloody battle had plagued the North and South for three years and resulted in the deaths of three million people. Though the armistice ended open hostilities, neither side officially agreed to peace.

The Demilitarized Zone separating both nations is still one of the most volatile and heavily armed regions in the world. Land mines litter the border, protected by barbed wire fences, outposts, and hundreds of thousands of soldiers. 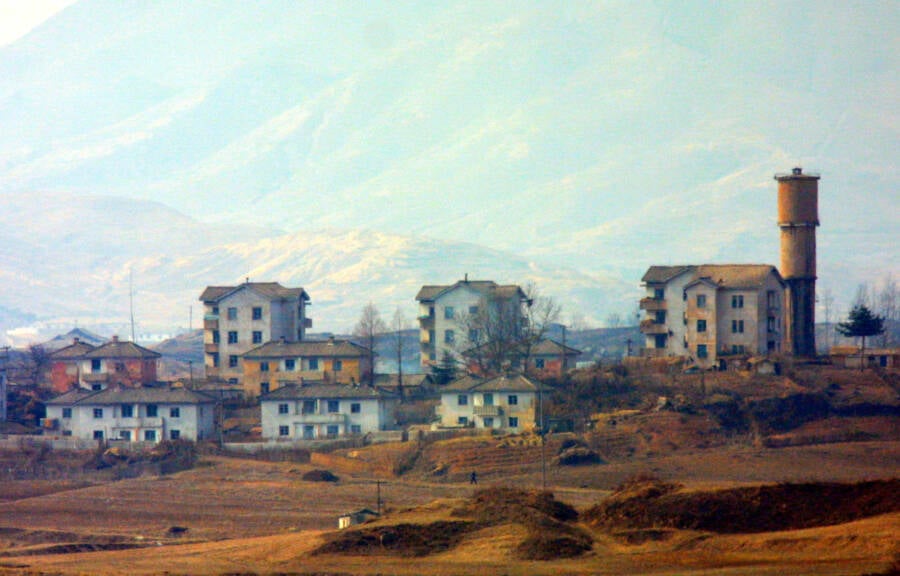 The DMZ is essentially a 2.5-mile-wide buffer zone spanning the entire 155-mile border. Both countries evacuated their civilian settlements along that area. After 1953, the countries could either retain or construct only one village on each side.

South Korea retained Daeseong-dong, or “Freedom Village.” It’s home to about 226 residents who inhabited the land before the start of the war. No additional visitors can enter or live there. Freedom Village residents have special IDs and a nightly curfew of 11 p.m. firmly in place.

Purportedly, northern intruders sometimes sneak inside to kidnap villagers — whom they then claim defected to North Korea voluntarily.

The North opted to build an entirely new town, Kijong-dong, or Peace Village, which is aptly nicknamed “Propaganda Village.” Made to project an image of economic success, instead, it’s a desolate shell. 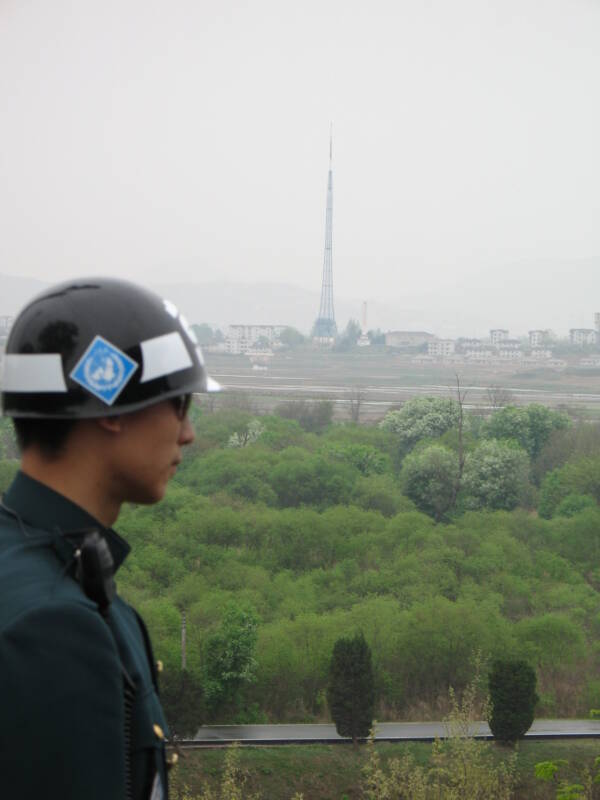 FlickrA South Korean soldier stationed at the DMZ overlooks the town of Kijong-dong.

Even though North Korea claims that Peace Village has 200 residents, observers from the South say nary a soul actually lives there. Commander Robert Watt of the multinational troops placed on the South Korean side said many buildings have windows painted on. He claims other structures are merely shells without floors.

But perhaps the most revealing feature of Kijong-dong is the electric street lights that routinely turn on to give the illusion of activity. These were practically unheard of in 1950s North Korea and were clearly installed to impress onlooking southerners.

Kim Jong-un, of course, has never admitted as much. The North Korean government claims to this day that the town has hundreds of happy residents. There’s even a child-care center, kindergarten, primary and secondary school, as well as a hospital in town — the story goes. 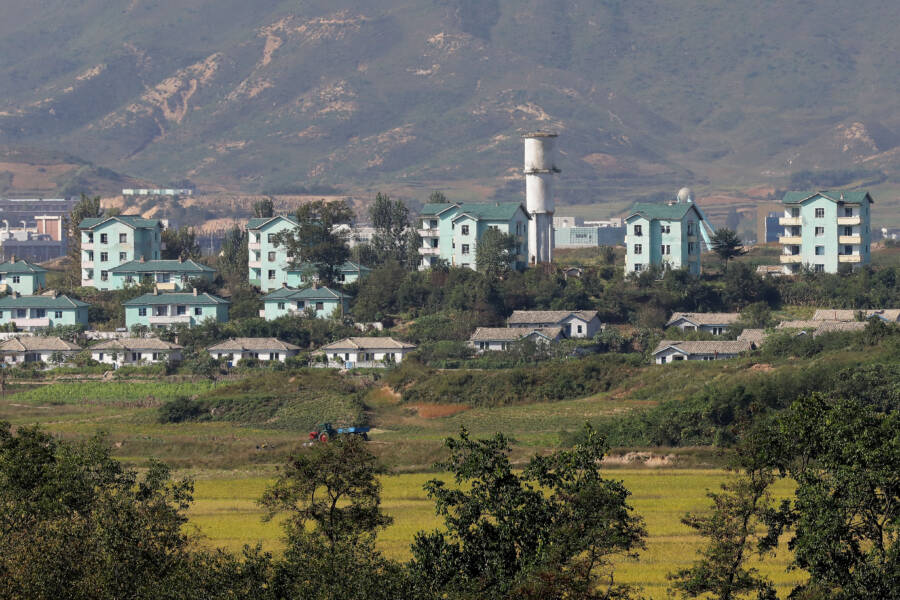 Chung Sung-Jun/Getty ImagesKijong-dong is regularly maintained by workers who sweep the streets, despite its population of zero.

In reality, there’s no one but the daily maintenance workers who provide any signs of actual North Koreans living there. Onlookers can see them unnecessarily sweeping up the streets from time to time.

Ultimately, the village seems to serve as nothing more than a pawn in an ego-measuring contest for the two countries. And the literal sizes of their flagpoles are proof.

The War Of The Flagpoles

“When most people think of North Korea, we think of Kim Jong-un, rockets, missile launches,” said Peter Kim, an American-born professor at Kookmin University in Seoul. “To put our hands around other things beyond what we see in the media, it’s really next to impossible.” 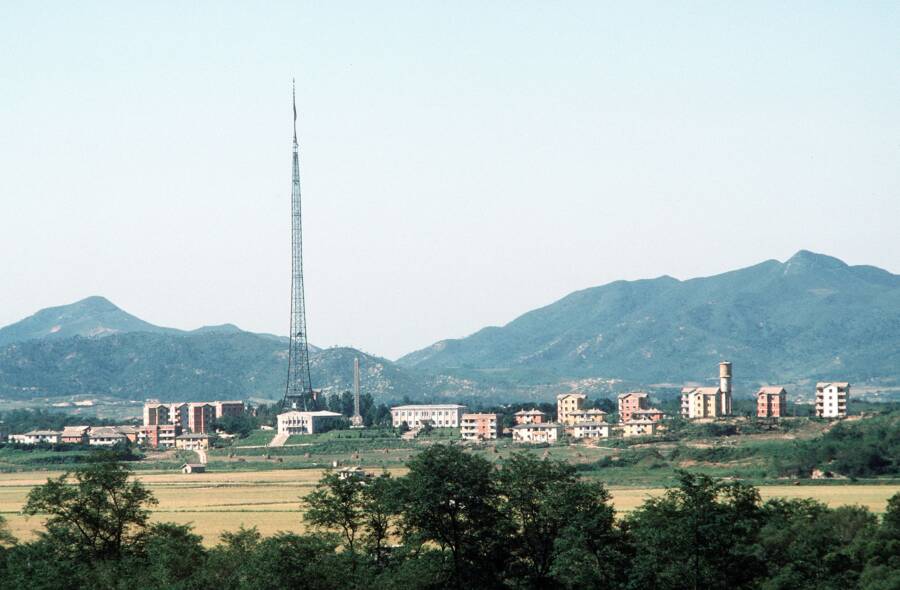 Wikimedia CommonsThe ghost town of Kijong-dong, with its record-holding flagpole scratching the skies.

To Kim’s point, it’s rather difficult to tell what exactly is occurring in the streets of Peace Village or anywhere else in the hermit kingdom in general. Meanwhile, the competition for the hearts and minds of each nation’s enemies is firmly on display in the form of their DMZ flagpoles.

South Korea erected a 321-foot flagpole in Daeseong-dong in the 1980s, which sparked North Korea to build an even higher one at 525 feet, at the time the tallest flagpole in the world. The southern flag weighed 286 pounds. That act forced the north to up the ante to 595 pounds. As it stands, the North’s is currently the fourth tallest flagpole on Earth. 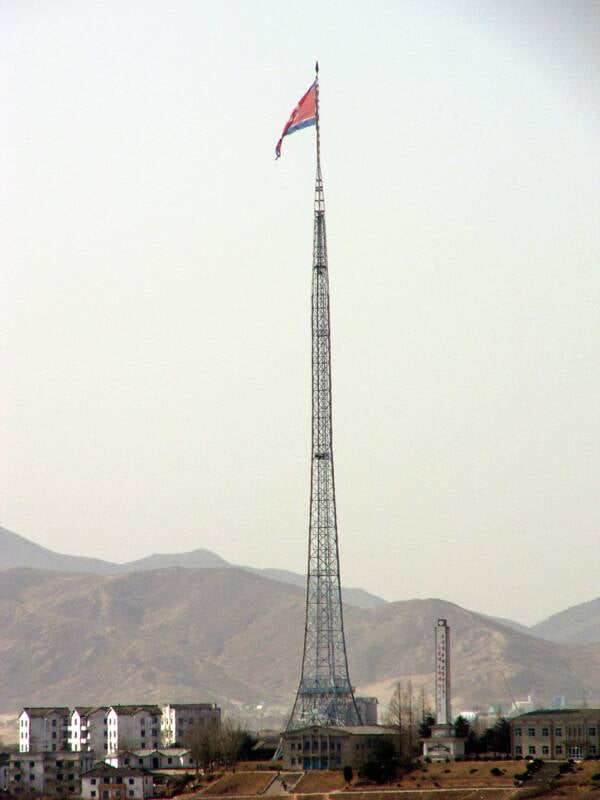 Wikimedia CommonsThe Kijong-dong flagpole is the fourth tallest in the world at 525 feet.

While this “flagpole war” is a curious phenomenon, the two nations have also used loudspeakers to outdo each other. The North routinely blasted propaganda broadcasts to the South. Those broadcasts praised North Korea’s triumphs and urged people to defect to there.

South Korea fired back with K-pop music blasted so loudly that it could be heard deep into North Korea all day.

“K-pop is quite a powerful means of propaganda,” said Professor Roald Maliangkay of the Australian National University. “It depicts South Korea as a hyper-modern, wealthy nation solely populated by passionate and attractive people.” 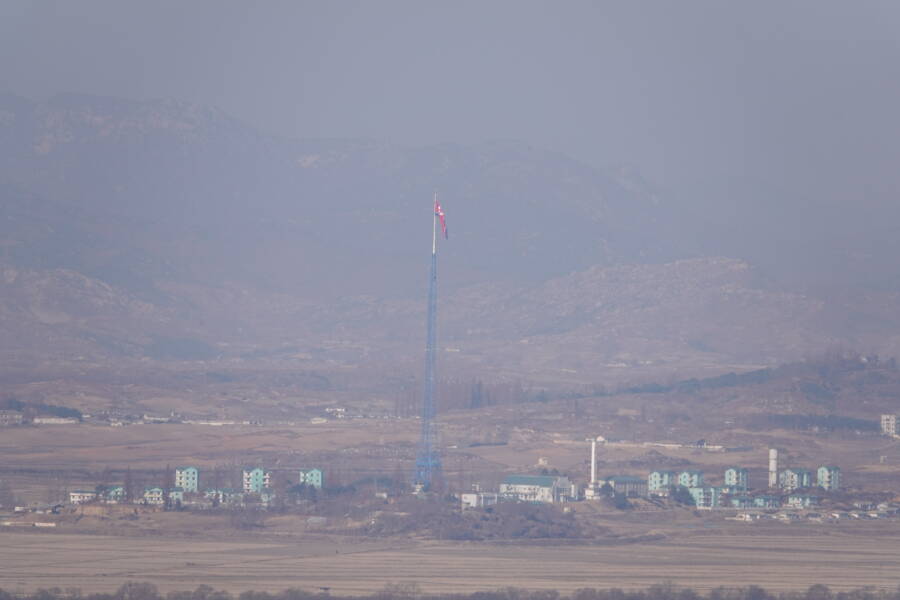 These hostilities agreeably came to an end in 2004 after both nations realized neither had gained anything from the speakers. Though the prankish behaviors resumed temporarily in 2016, they’ve largely fallen silent since.

Hopefully, the north will eventually see this peaceful end of aggression as a microcosm of what could be, on a grander scale.

After learning about the “Peace Village” ghost town on the border of North and South Korea, read about what the internet looks like in North Korea. Then, learn about life in North Korea through 55 rare photos.