Inspired by "nanodiamonds" found on ice giants like Uranus and Neptune, this new research could help to greatly reduce plastic pollution and transform plastics in the ocean. 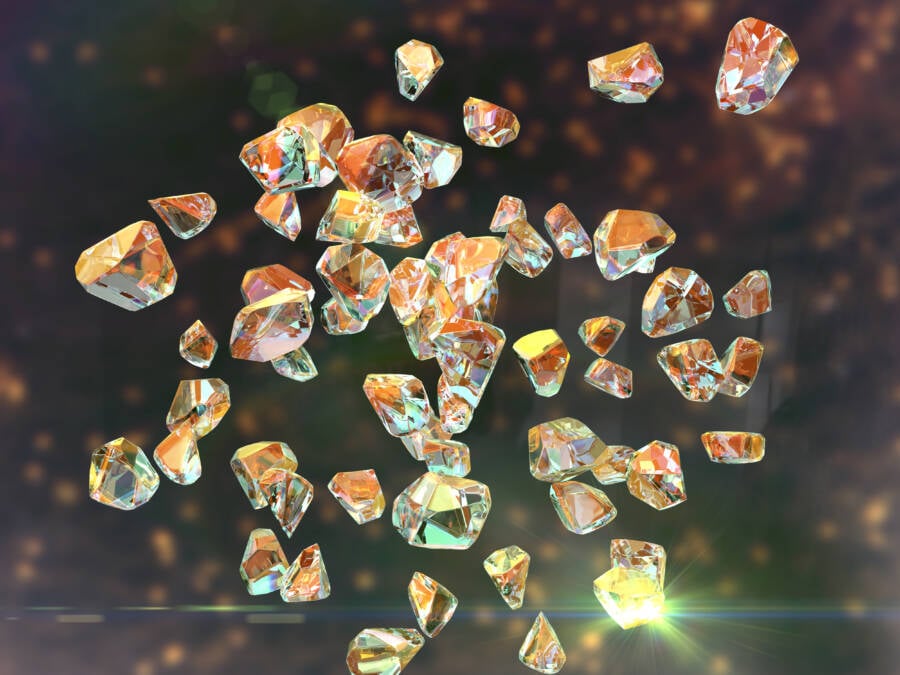 Science Photo Library/Getty ImagesA computer illustration of nanodiamonds. Smaller than a micrometer, they have a high potential for medicine, electronics, and other industries.

Scientists at Helmholtz-Zentrum Dresden-Rossendorf in Germany recently blasted cheap plastic with ultrapowerful lasers, and in the process created incredibly tiny “nanodiamonds” and confirmed the existence of a new, exotic type of water.

Using a high-powered optical laser, the physicists blasted a sheet of polyethylene terephthalate (PET) plastic — the kind used in water and soda bottles — and heated the plastic to around 10,000 degrees Fahrenheit for an incredibly brief amount of time, only billionths of a second, Live Science reported

The result was that this extreme heat created pressures millions of times stronger than Earth’s atmosphere, ultra-compressing the plastic and effectively demixing its molecular structure. Carbon atoms within the plastic began to crystallize, leaving room for hydrogen and oxygen to drift out through the resulting lattice.

The crystallized carbon turned into nanodiamonds which measured billionths of a meter, while the hydrogen and oxygen turned into “superionic water,” or “superionic ice,” which Quanta Magazine stated is a black, incredibly hot ice that may actually be the most common form of water in the universe.

So, what does this all mean?

In practical applications, nanodiamonds can be used to convert carbon dioxide into other gases and deliver drugs into human bodies, explained the research study’s co-author, physicist Dominik Kraus.

And potentially, in the future, Kraus believes that nanodiamonds could also be utilized as “ultrasmall and very precise quantum sensors for temperature and magnetic fields, which may result in a plethora of applications.”

But perhaps most relevant to the average person is the fact that this technique could help reduce plastic pollution by providing a financial incentive to clear plastics from the ocean and transform them into nanodiamonds.

Another researcher on the project, Siegfried Glenzer, from the SLAC National Accelerator Laboratory in California, explained that scientists have previously been able to create nanodiamonds in laboratory settings, but “the conditions were so extreme and dynamic that the diamonds ended up falling apart.”

This new test created the diamonds at a much lower pressure, and, Glenzer said, might actually offer physicists a chance to harvest the diamonds.

The experiment also offered physicists further understanding of the nature of planetary ice giants like Neptune and Uranus, whose strange conditions have frequently baffled researchers.

Neptune, despite being an ice giant, has always been unexpectedly hot, and Uranus’ magnetic field forms in a strange shape.

Like PET plastic, the interiors of ice giants contain oxygen, carbon, and hydrogen, but their internal pressures were never believed to be intense enough to result in nanodiamond formation.

This new experiment proves, however, that nanodiamonds could very likely form at the cores of ice giants, where the heat would cause a similar reaction as the lasers did to PET plastic, causing “diamond rain” that would travel through the interior of the planet.

“What this means,” Glenzer said, “is that diamonds are probably everywhere. If it happens at lower pressures than we’ve previously seen, it means they’re inside Uranus, inside Neptune, inside some moons such as Titan.” 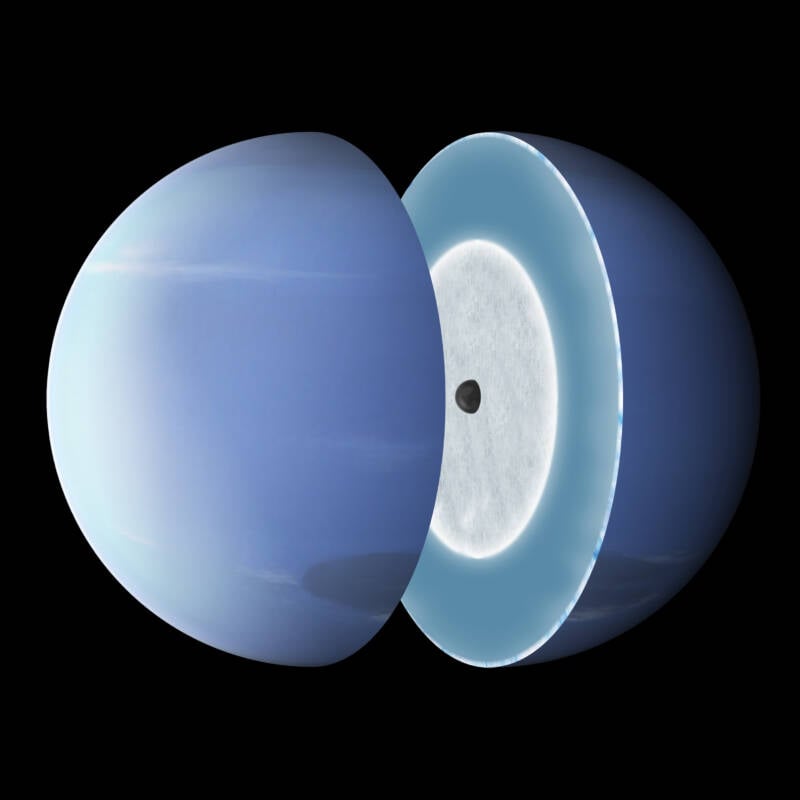 Diamonds traveling throughout the interior of Neptune could be creating friction that would explain the planet’s high temperatures, and the formation of superionic water on Uranus may be conducting currents that give its magnetic field its strange shape.

While these theories have yet to be proven, the new study provides good evidence that nanodiamonds and superionic water are actually forming naturally on Neptune and Uranus.

It’s possible, Kraus said, that this theory can be confirmed within the next 10 years or so, when he expects a NASA space probe to be launched to Uranus.

In any case, though, the ability to turn cheap plastic into useful materials like nanodiamonds and superionic water could have dozens of practical applications here on Earth, and that’s something to be very excited about.

After reading about this new discovery, read about the lake of water scientists discovered on Mars. Then, view the photo of a supermassive black hole destroying a star.