The first-of-its-kind chariot is ornately designed, leading experts to believe it was used in weddings and parades. 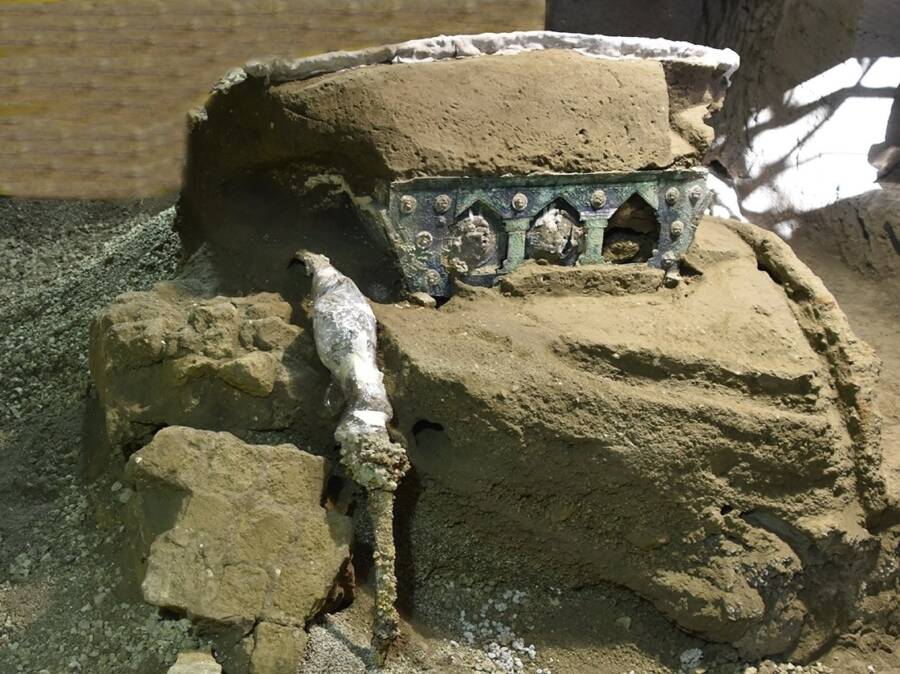 Archaeological Park of PompeiiThe chariot is composed of four iron wheels and is engraved with bronze and tin.

When Mount Vesuvius erupted in 79 A.D., those in the city of Pompeii were doomed. Lava and volcanic ash rained down on cities even 20 miles away, and the scorching temperatures baked Pompeiian’s brains into glass and burned off their skin.

But the ash also served as a remarkable preservative, and bodies of Pompeii have been excavated by modern archaeologists seemingly frozen as they were when they died thousands of years ago.

Now, in a first-of-its-kind find, researchers have uncovered a remarkably intact ceremonial chariot in the remains of a luxurious villa north of Pompeii.

“I was astounded,” said Eric Poehler, who studies ancient Pompeiian transportation at the University of Massachusetts, Amherst. “Many of the vehicles I’d written about before… are your standard station wagon or vehicle for taking the kids to soccer. This is a Lamborghini. This is an outright fancy, fancy car.”

Footage of the dig site at Civita Giuliana and an interview with Italy’s culture minister Dario Franceschini.

According to the Archaeological Park of Pompeii, this fascinating discovery is the result of renewed efforts launched in 2017 to recover all invaluable relics buried below the ancient ash.

The chariot featured engravings of satyrs, nymphs, and cupids on bronze and tin medallions, which suggested the vehicle was ceremonially used in weddings. The villa in which the chariot was found was made of English oak, which was common in Ancient Rome.

While excavations at Civita Giuliana began as early as January 7, it took weeks for researchers to carefully raise the ancient chariot from the dead. Perhaps most remarkable is that the villa had partially collapsed over the centuries, but left this particular item without any significant damage, perhaps because it was stored inside of a portico.

According to archaeologists involved, this “extraordinary find” had “no parallel in Italy thus far.”

“It is an extraordinary discovery for the advancement of our knowledge of the ancient world,” said Massimo Osanna, the outgoing director of the Archaeological Park of Pompeii. “At Pompeii vehicles used for transport have been found in the past, such as that of the House of Menander, or the two chariots discovered at Villa Arianna, but nothing like the Civita Giuliana chariot.” 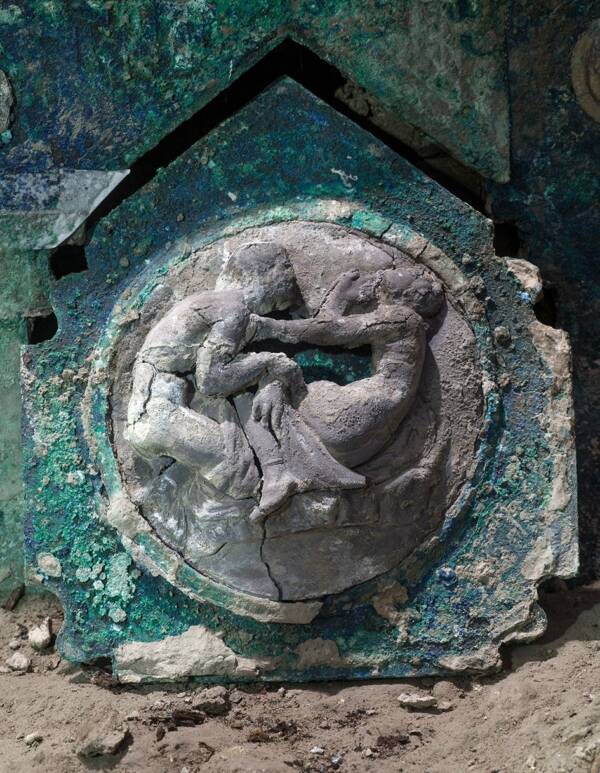 Archaeological Park of PompeiiThe engravings have led experts to believe this chariot was used ceremonially in weddings and parades.

The chariot is of particular import as it was used ritualistically rather than for functional travel.

“This is precisely the kind of find that one wants to find at Pompeii, the really well-articulated, very well-preserved moments in time,” said Poehler. “And it happens to be in this case an object that is relatively rare despite its ubiquity in the past.”

Besides how luxurious it is, the chariot is also of interest to researchers because it more closely resembles chariots found in ancient Greece than in Italy. 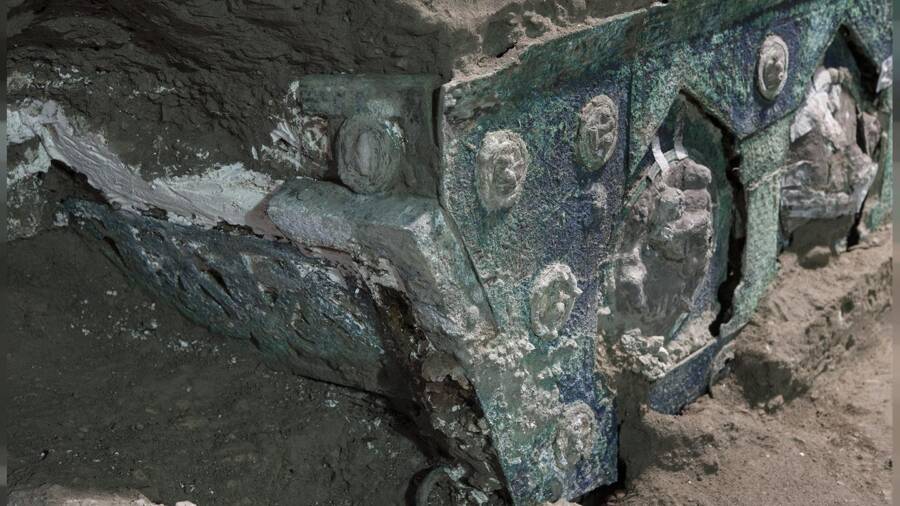 Archeological Park of PompeiiThe volcanic material still covering the chariot’s bronze and tin medallions is currently being removed at the local laboratory.

The chariot was also reportedly discovered by experts in the nick of time. Pompeii has been plagued by unlicensed visitors and looters, and excavators discovered two unofficial tunnels dug on either side of the ancient chariot, suggesting it too was nearly pilfered.

Artifacts are stolen so commonly from Pompeii, in fact, that just recently, a Canadian tourist returned items she took from the ancient site years before. She claimed the items were “cursed” and pleaded with a local Pompeiian travel agent to “take them back, please, they bring bad luck.”

As for the chariot, it is currently being safeguarded by and studied at the Archaeological Park of Pompeii’s laboratory. The Public Prosecutor’s Office of Torre Annunziata, the Naples Carabinieri Headquarters for the Protection of Cultural Heritage, and investigators commanded by Annunziata are all working together to protect it. 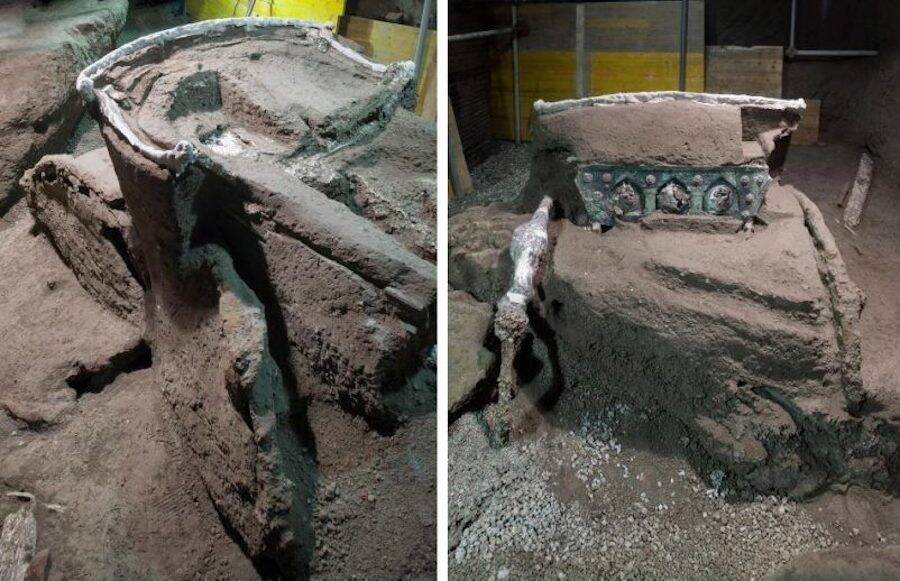 Archeological Park of PompeiiThe chariot was discovered in early January, but has only now been fully excavated and secured.

The eruption of Mount Vesuvius 2,000 years ago resulted in countless horrific deaths under suffocating ash and in scorching temperatures. For archaeologists, however, the natural disaster has left astonishing traces of ancient history preserved in all their architectural glory.

“Pompeii continues to amaze with all of its discoveries, and it will continue to do so for many years to come, with twenty hectares still to be excavated,” said Italy’s culture minister Dario Franceschini. “But above all, it demonstrates that valorization can occur, and tourists can be attracted from all over the world, whilst at the same time research, education and studies are being conducted.”