For thousands to millions of years, these massive creatures stalked Earth at its dawn, until climate change — or early man — hastened their demise.

Some of them, like the giant sloth or the woolly rhino, were generally gentle. Others, like the saber-toothed tiger and the dire wolves, dominated their environment with their size and fearsome fangs.

For millions of years, these ancient animals stalked through grasslands, climbed trees in the jungle, and chased prey into tar pits. Though vastly different, they all died out in similar ways due to changing climate, poaching, or disease.

Today, they exist as just a whisper of their former might — a bone here, a tooth there — but in their prime, these prehistoric animals would have struck fear and awe into early humans.

Glyptodon: The Prehistoric Armadillo The Size Of A Car

Wikimedia CommonsA fossil of the prehistoric animal known as glyptodon.

Between 5.3 million to 11,700 years ago, a peculiar creature called the glyptodon — meaning “grooved tooth” — walked the Earth.

Ten feet long and weighing as much as 4,000 pounds, this “giant armadillo” existed in present-day North and South America. Though the glyptodon had a powerful tail and an armored back made of 1,000 bony plates, it likely lived a fairly peaceful existence. An herbivore, it mostly ate grass and didn’t have to worry about any bloody tussles over game.

That said, the glyptodon could defend itself — even against other glyptodons — if need be. Its powerful tail could crush a human skull, and its shell-like back offered a strong defense.

Based on the damage found on glyptodon shell fossils, scientists believe that the beasts often fought each other. To settle disputes over territory or mates, they’d pummel their opponent’s shell with their strong tail.

But this ancient animal often had to contend with humans, too. Early hunters likely stalked the glyptodon for its meat and shell. To kill it, however, they had to turn it on its back — no small task — and spear its soft underbelly. 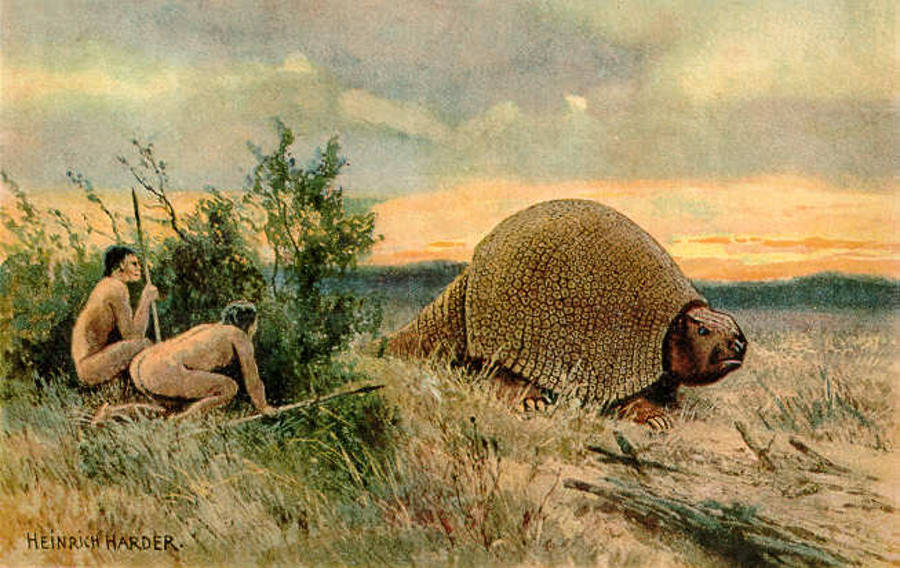 Wikimedia CommonsEarly humans might have even used these ancient animals’ massive shells as shelter.

Researchers first discovered the glyptodon in 1823, when Uruguayan naturalist Dámaso Antonio Larrañaga came across a giant femur. The bone weighed about seven pounds and stretched six to eight inches long.

Most believed, however, that he’d found the bones of a giant sloth called Megatherium. Further discoveries convinced scientists that they were dealing with a different prehistoric animal, however, and biologist Richard Owen dubbed it a glyptodon because of its curved teeth.

The reign of the glyptodon came to an end shortly after the last Ice Age. Climate change, and aggressive human hunting, drove the giant armadillo into extinction.

Today, only their massive bones speak to their existence. As recently as 2020, an Argentinian farmer found several glyptodon shells in his yard.