The newly unearthed specimen of Siamogale melilutra is the largest ever found. 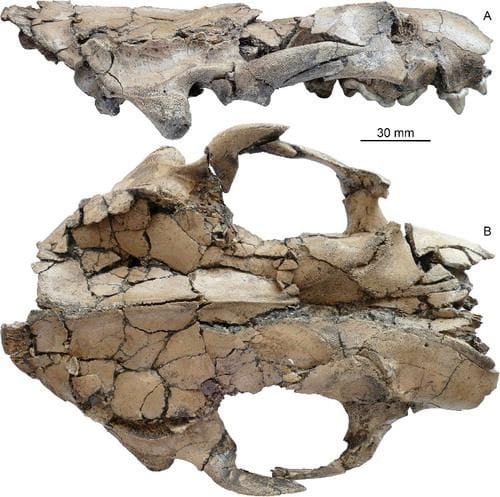 Wolf-sized giant otters roamed prehistoric waters between 6 million and 18 million years ago, according to new findings uncovered by researchers in China.

U.S.-based paleontologists have unearthed the largest otter ever discovered while excavating an ancient lake bed in Shuitangba, located in the Yunnan province of southwestern China.

Weighing approximately 110 pounds, paleontologists are calling the species Siamogale melilutra. They were almost twice as large as today’s otters.

Researchers were only previously aware of this ancient creature due to teeth fragments unearthed in Thailand. But now, the discovery of a complete skull, jawbone, and teeth confirm how this creature adapted to survive.

“From the vegetation and other animal groups found at Shuitangba, we know that it was a swampy, shallow lake with quite dense vegetation,” said Denise Su, the curator and head of paleobotany and paleoecology at the Cleveland Museum of Natural History.

Siamogale melilutra‘s powerful jaw cracked open extra large shellfish and mollusks. Its teeth are like modern otters’ teeth, whom experts believe evolved the way they did because of their ancestors’ diet.

“Multiple otter lineages have low-crowned, rounded teeth, leading us to ask the question if this was inherited from a common ancestor or if this was convergent evolution based on common dietary behaviors across different species,” said Xiaoming Wang, lead author of the paper and curator and head of vertebrate paleontology at the Natural History Museum of Los Angeles County. “Our analysis suggests that the dentition independently appeared at least three times over the evolutionary history of otters.”

Researchers used a CT scanner to rebuild the prehistoric otter with computer graphics, as fossilization squished the skull flat.

“While the cranium is incredibly complete, it was flattened during the fossilization process,” said Su. “The bones were so delicate that we could not physically restore the cranium. Instead, we CT-scanned the specimen and virtually reconstructed it in a computer.”

Now, scientists are attempting to learn more about how these fascinating creatures lived.

Next, check out ten terrifying prehistoric creatures that weren’t dinosaurs.