Researchers studied a partial skull of the pterosaur and determined that the dinosaur cousins were likely covered in fuzz-like hairs and sported a bold crown of feathers. 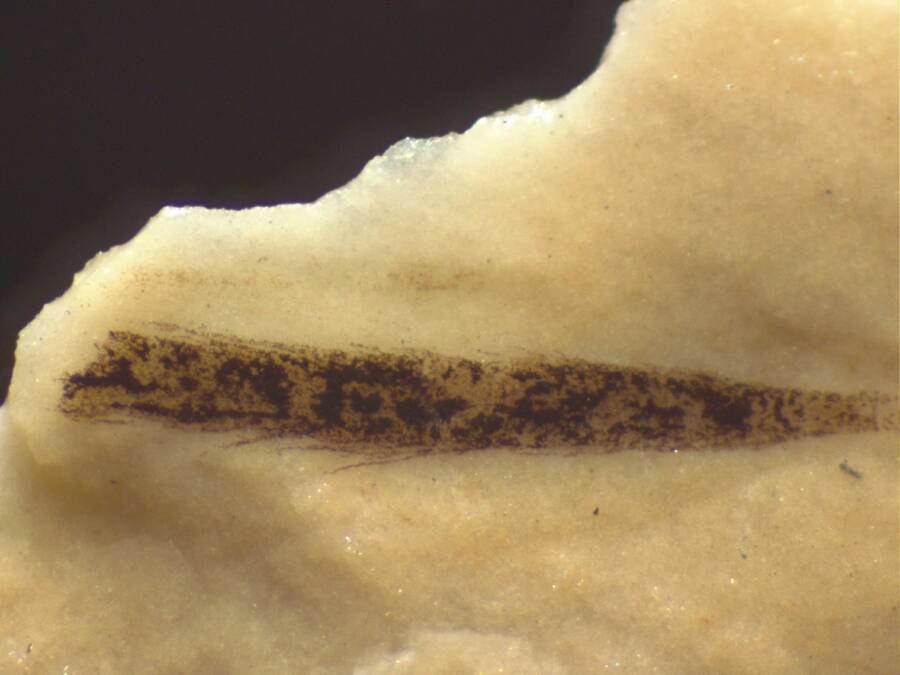 Maria McNamaraPaleontologists found branched feathers similar to those of modern birds in the pterosaur’s fossilized crest.

Scientists have long known that dinosaurs had feathers of some sort, but now they believe they’ve found proof that these feathers existed 100 million years earlier than they previously thought.

In a new study published in the journal Nature, paleontologists discovered feathers on a pterosaur or Tupandactylus imperator, a close cousin of dinosaurs. 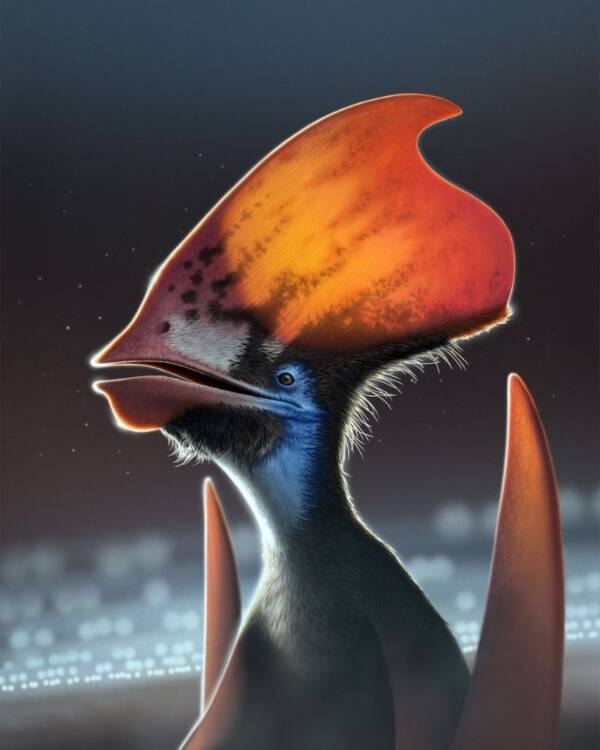 Maria McNamara, professor of paleontology at University College Cork in Ireland, had the chance to study the partial skull of a Tupandactylus imperator, a pterosaur known for the large, sail-like crest on its head.

According to Scientific American, the fossilized remains were 113 million years old and preserved in Early Cretaceous limestone slabs. Originally discovered in Brazil, the fossil had made its way to a private collector in Brussels, who asked McNamara and her colleagues to examine it.

In studying the crest, the team of paleontologists were stunned to see two different types of feathers. The first feathers were a type of short, hair-like fuzz known as pycnofibers. But they also found longer, branching feathers, similar to those of modern birds.

McNamara told NBC News, “At this point, we started to get very excited because it’s been known for a long time that pterosaurs had some sort of fluffy covering, but it was thought this was some kind of hair-like structure that wasn’t related to feathers.”

Steve Brussate, a professor of paleontology at the University of Edinburgh, said of the findings, “To me, these fossils seal the deal — pterosaurs really had feathers.”

He continued, “Seeing photos of this fossil blew me away. Feathers aren’t just a bird thing, or even just a dinosaur thing, but evolved deeper in time.”

Birds, dinosaurs, and pterosaurs all share a common evolutionary ancestor, and the study’s paleontologists now posit that feathers first evolved with this ancestor that lived 250 million years ago.

This groundbreaking discovery suggests that not only were pterosaurs covered in bird-like feathers, but those feathers may have also been vibrantly colored.

“One of the big questions is: Why did feathers evolve?” McNamara said. “What was the function? We think we have really good evidence here that visual communication was an important driving factor in feather evolution.”

Scientists initially believed the fluffy feather-like filaments found on pterosaurs previously acted as a way to control their internal temperature. Now, with the discovery of multicolored branching feathers, they believe they served a social purpose too.

Maria McNamaraPaleontologists found branched feathers similar to those of modern birds in the pterosaur’s fossilized crest.

McNamara said, “In birds today, feather color is strongly linked to melanosome shape. Since the pterosaur feather types had different melanosome shapes, these animals must have had the genetic machinery to control the colors of their feathers. This feature is essential for color patterning and shows that coloration was a critical feature of even the very earliest feathers.”

But not everyone is convinced. David Martill, a professor of paleobiology at the University of Portsmouth in the U.K., has his doubts.

“I have no objection to the notion that pterosaurs might have had a feather-like pelt,” he said. “But to suggest that the frayed fibrous structures seen on some pterosaurs are protofeathers and share a homology with feathers requires better evidence than this.”

To that, McNamara responds, “Maybe it just boils down to semantics. For me, if something has the same structure as a feather, contains melanosomes, and shows chemical signatures for keraton — these are all defining characteristics of feathers. There’s no need to invent a new name for it.”

As for the fossil, McNamara and her colleagues worked to repatriate it to Brazil, where it was originally found and can now be seen at the Earth Sciences Museum in Rio de Janeiro. This was important to McNamara, she said, because “people deserve to have their own fossils back in their own country and to feel that sense of pride in their heritage.”

Scientists are now working to determine the color of the feathers to form a better understanding of how the ancient pterosaur truly looked.

Next up, check out this fossil of a dinosaur that was killed the day the asteroid struck Earth. Then, learn about this gargantuan perhistoric crocodile that was found with a dinosaur in its stomach.