Peruvians usually gather ever June to destroy and rebuild the bridge but were prevented from doing so last year. 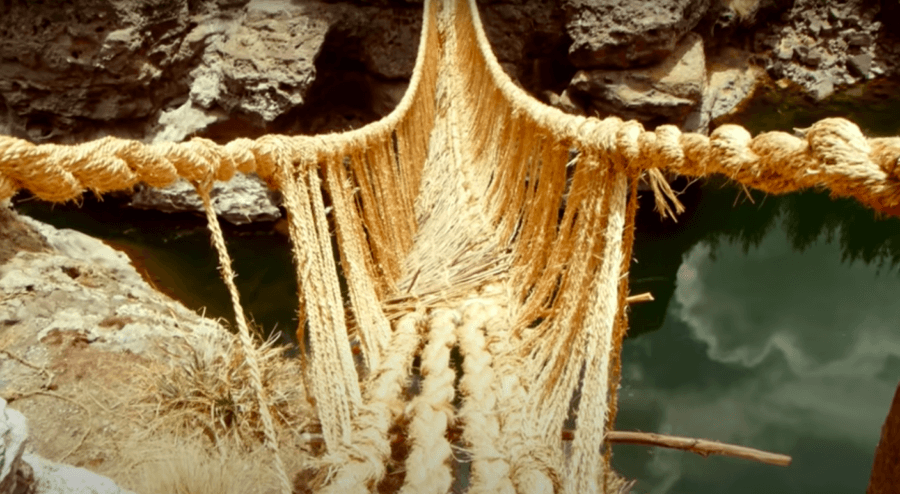 The COVID-19 pandemic frayed connections all over the world. In Peru, it frayed the 500-year-old Q’eswachaka bridge, which fell apart in March 2021. Now, Peruvians are joining together to re-weave the Incan bridge.

“Last year because of the pandemic, it wasn’t strengthened … That is why at the beginning of this year the bridge fell,” explained Cusco Regional Governor Jean Paul Benavente.

Normally, people from Indigenous communities in Peru gather every June to destroy and then rebuild the bridge. But in 2020, their traditional three-day ceremony couldn’t happen due to the pandemic. Thus, untended, the bridge fell apart.

But this year, the tradition has returned. Peruvians from the Huinchiri community in Cusco came together to reweave the bridge, which stretches almost 100 feet across the Apurimac River. Balancing on giant ropes, craftsmen on each side of the ravine worked toward each other. 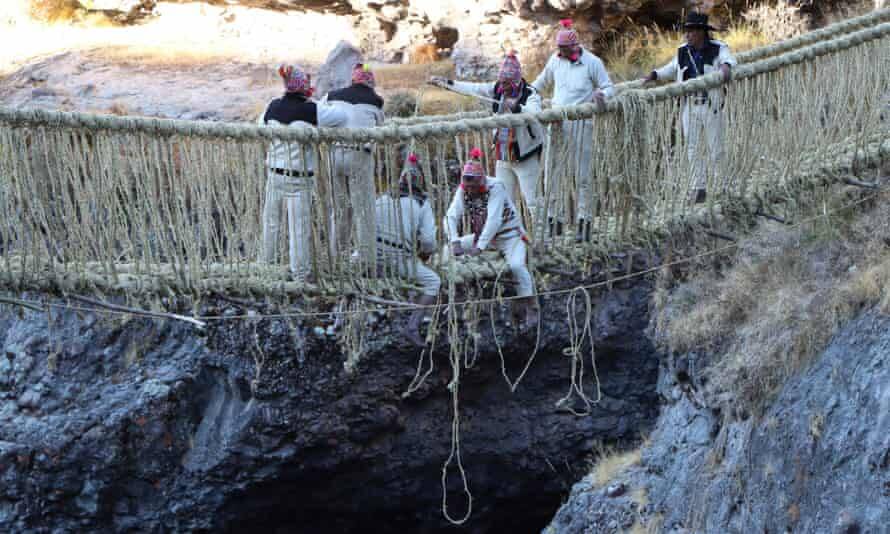 The bridge, said Benavente, connects villages. But it “also connects traditions and connects culture.” And Q’eswachaka is an important part of Peruvian history. 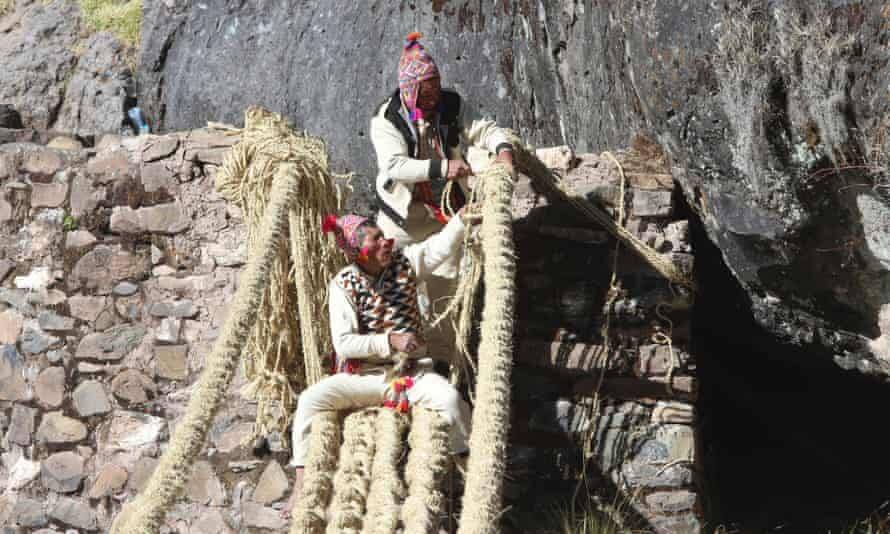 Cusco Regional GovernmentPeruvians at work, one of them balancing on ropes.

For centuries, handwoven bridges like Q’eswachaka crisscrossed Incan territory. They connected people otherwise isolated by canyons and gorges and played a vital role in developing the Inca Empire. Indeed, anyone caught tampering with the bridge could be put to death.

But as the years went on, many of the bridges fell into disrepair. Some of them were intentionally destroyed — people in Cusco burned down bridges to slow the approach of invading Spaniards. 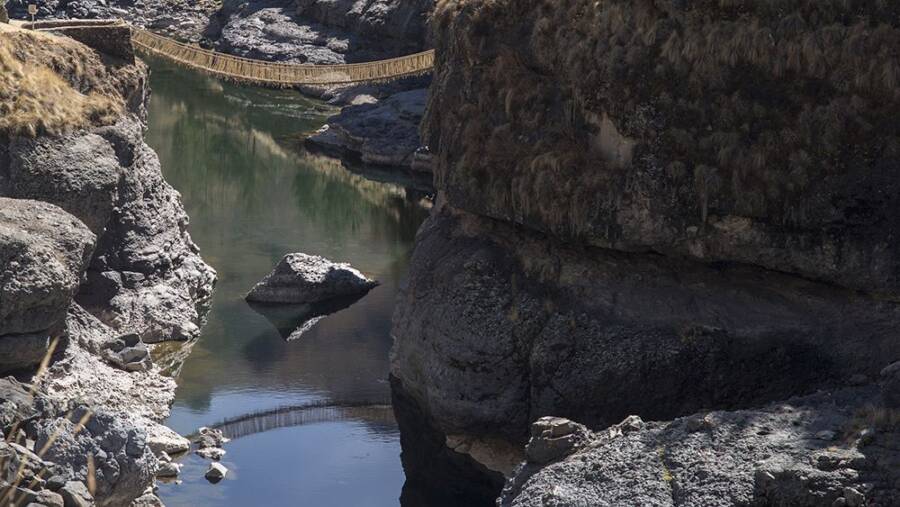 And today, the Q’eswachaka bridge is the last handwoven bridge in Peru. Because woven bridges sag over time, Peruvians from the Huinchiri, Chaupibanda, Choccayhua, and Ccollana Quehue indigenous communities usually gather each June to destroy, then rebuild the bridge.

Generally, they’ll start building the new bridge while the old one is still in place. Over the course of just three days, the communities gather on each side of the bank and work toward each other to build the new bridge. Then, they cut down the old one and let it fall into the water — and celebrate the ceremony with food, drink, and music.

“This is history. More than 500 years of a paradox in time. The Q’eswachaka, this Incan living bridge, is really an expression and cultural manifestation,” explained Benavente.

In 2013, UNESCO recognized the Q’eswachaka bridge’s cultural and historical importance by including it and its traditional destruction as Intangible Cultural Heritage of Humanity.

“The bridge is considered a sacred expression of the communities’ bond with nature, tradition and history, and the annual renewal is accompanied by ritual ceremonies,” UNESCO notes on their site.

“Although the renewal lasts only three days, it structures the life of the participating communities all year round, establishing communication, strengthening centuries-old bonds and reaffirming their cultural identity.” 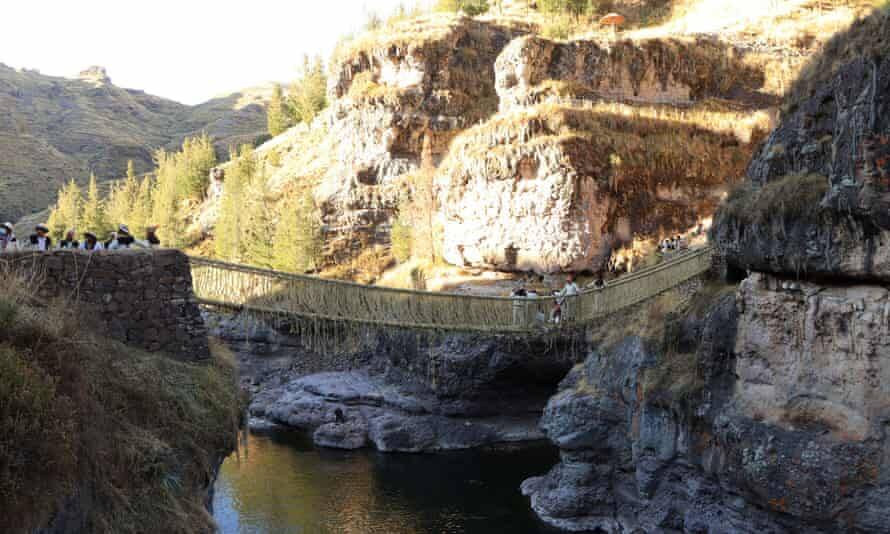 Cusco Regional GovernmentPeruvians returned to reweave the bridge in 2021.

Today, the Q’eswachaka bridge’s meaning is even deeper. Last year, people in Peru weren’t able to participate in their normal ceremony of destroying, then rebuilding the bridge. Like people around the world, they were cut off from their traditions, friends, and sense of normalcy.

And, untended, the bridge fell into the waters of the Apurimac River. But as the latest stage of the pandemic seems to wane, and as hope appears on the horizon in the form of new vaccines and treatments, Peruvians were able to return to the bridge. They were able to pick up a tradition 500 years in the making — proving that the pandemic, like all things in history, is just a small part of a much greater mosaic of events, people, traditions, and lives.

“It is like an answer to the pandemic itself,” said Benavente, of the most recent reweaving of the Q’eswachaka bridge. “From the depths of the Peruvian Andean identity, this bridge is strung up across the Apurimac basin and we can tell the world that we are coming out of this little by little.”

After reading about the Peruvians who re-wove the Q’eswachaka bridge, learn about the Millau Viaduct, the tallest bridge in the world. Or, delve deeper into the engineering genius of the Inca, who built Machu Picchu along fault lines for a clever reason.