What’s The Most Popular Reality TV Show In Your State? 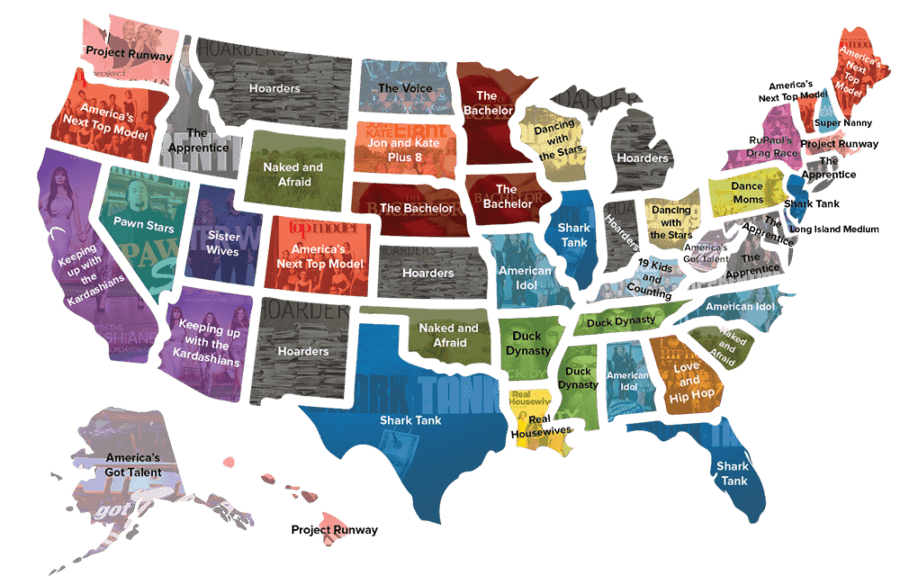 A new study has some pretty interesting findings about state-by-state TV preferences.

As reality TV shows capture millions of viewers each week, a team at CableTV opted to explore just who was watching what, and where.

The team analyzed Google Trends to find the top show for each state, then compared those findings to state statistics across a number of other measures. You can see the top shows in the map above, and a full breakdown by state here.

In addition to finding that the South seems to love Duck Dynasty while the West Coast regularly keeps up with the Kardashians, researchers gained interesting insights into trends beyond geography.

“We’ve found that education levels and socioeconomics don’t influence the amount of reality TV watched, but it does strongly influence the type of reality show,” CableTV representative Amber Robbins said.

“States where educational achievement is lowest — generally in the south — love shows like Duck Dynasty, Naked and Afraid, and 19 and Counting 2-5 times as much (per capita) as more educated states on either coast,” Robbins added. “The opposite is true for shows like Project Runway, America’s Next Top Model, and So You Think You Can Dance.”

As for political affiliation and TV preference, conservatives — in states like Utah, Wyoming, and Idaho, all with a high percentage of registered Republicans — tend to tune into Sister Wives. Highly Democratic states like Vermont, Hawaii, and Washington DC prefer Project Runway.

Researchers found that high church-attending states including Utah, Mississippi, and Louisiana pray to the bearded Duck Dynasty gods, while states with a large proportion of church skippers — such as Maine, Vermont, and D.C. — prefer Survivor.

The study also found that in states with the lowest rates of well-being — such as West Virginia, Kentucky, and Indiana — shared a proclivity for Duck Dynasty. States who rank among the highest in terms of positive well being, like Alaska, Hawaii, and South Dakota, watch Project Runway.

“It’s very interesting to see the difference [in these preferences],” Robbins said. “It may point to a deepening class-based cultural segregation that starts with education and runs all the way down to what we watch after work.”

Next, check out these maps which explain the U.S. better than any history book.