Scientists think it could be a rare seven-armed octopus — a species normally found in the Atlantic Ocean or in the South Pacific. 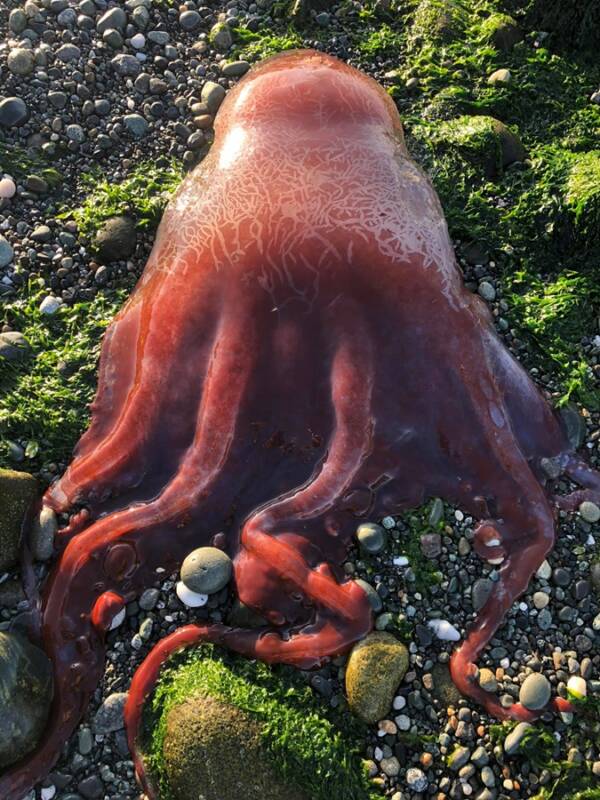 Ron Newberry/Whidbey Camano Land TrustPhotographs of a mysterious “red glob” that washed ashore on a beach in Washington have bewildered scientists.

Every once in a while, a mysterious “thing” from the sea will wash up on the beach and cause a sensation on social media. The latest to spark an online biology quiz among scientists was a mysterious “red glob” that appeared on the shores of Washington state.

According to Seattle Weekly, the strange sea creature was discovered on the beach at Ebey’s Landing by resident Ron Newberry, a communications specialist at the state’s Whidbey Camano Land Trust. The unidentified animal was found on the algae-covered rocks of the beach during low tide in late August 2020.

“Not knowing what it was, I definitely didn’t want to touch it. It was also obvious it was dead,” Newberry said. Intrigued by the mysterious glob, Newberry shared photos of the specimen on the Land Trust’s social media page, sparking an online discussion among scientists trying to identify the animal.

The creature’s misshapen body spurred various guesses. An engineer from the Seattle Aquarium thought it looked like a vampire squid, which are known to dwell as far as 3,000 feet under the sea. Others guessed it might be a destroyed giant Pacific octopus, believed to be among the largest octopus species in the world.

After photos of the fascinating sea specimen were shared widely among scientists online, a consensus finally formed. Based on the photographs alone, many scientists across the country determined the unknown carcass was likely a Haliphron atlanticus, otherwise known as the rare “seven-armed octopus.”

This sea creature washed up at Ebey’s Landing this morning. Quite possibly an East Pacific red octopus. Easily 3 feet…

“I’ve seen photos of Haliphron from off the coast of British Columbia, so it’s not that unusual that they are this far north,” wrote Elaina Jorgenson of the National Oceanic and Atmospheric Administration (NOAA). “It’s possible that this animal was blown into Puget Sound during the wind storm last week and died from our low salinity waters.”

The seven-armed octopus is typically found in the Atlantic Ocean, though they have also been observed in the South Pacific near New Zealand. Due to the small likelihood of a seven-armed octopus showing up off the coast of Washington, the discovery astounded many.

“I was surprised that it was found in Puget Sound which is pretty far north for that species,” wrote Michael Vecchione of the Smithsonian Institution. “However, shifting distributions are not unusual in the world lately.”

Based on the creature’s somewhat decayed body, biologists agree that it is more likely to be an H. atlanticus than a giant Pacific octopus — its jelly-like texture, shape, and size are consistent with the former.

Like most deep-sea creatures, we don’t know much about the seven-armed octopus. They get their name because the “seven-armed” males of the species commonly keep their eighth arm tucked up inside in a sac near the eye. This hidden arm is used for breeding purposes. The females, which are typically much larger than males, have eight fully-visible arms.

The H. atlanticus swims all the time, similar to jellyfish, which seems to be the octopi’s preferred meal. The species has been pitted against the giant Pacific octopus for the title of the largest octopus species in the world. 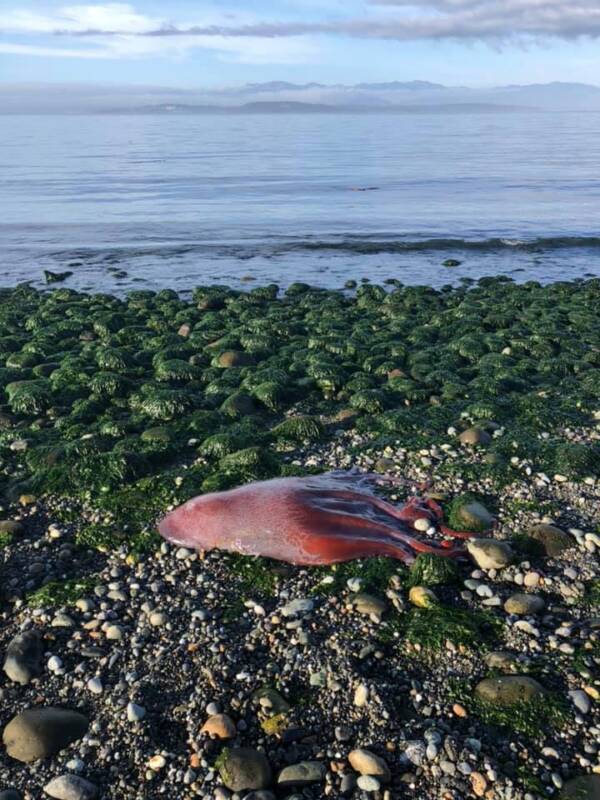 One of the largest specimens of H. atlanticus was identified by a biologist in New Zealand named Steve O’Shea who came across a huge specimen estimated to weigh somewhere around 165 pounds.

The one found by Newberry is quite small by comparison. He had no exact measurements of the red glob — possibly because he didn’t want come too close to it — but guessed that the corpse was somewhere about 3.5-feet-long.

It’s impossible to conclude for sure that the carcass on the beach was in fact a seven-armed octopus without DNA confirmation. But if the hypothesis is correct, the specimen may be the first recorded instance of a seven-armed octopus ever found in the Puget Sound area or Washington state.

Nevertheless, Newberry is not all that surprised by the discovery given the flourishing wildlife around Whidbey Island.

“I saw a family of river otters swimming about 10 minutes after I saw the octopus,” Newberry said. “Porpoises are a common site from Central Whidbey shores. Seals, sea lions, you name it. Whidbey is a magical place.”

Next, read about the mysterious ‘blob’ with 720 sexes and the ability to learn then take a look at 77 fantastical illustrations of the natural world by 19th century biologists.