The Story Of The RMS Carmania, The Luxury Ocean Liner That Was Turned Into A World War I Warship

While serving as part of the British fleet during World War I, the RMS Carmania sank a German vessel named SMS Cap Trafalgar that had been painted to look just like it in hopes of fooling other British ships. 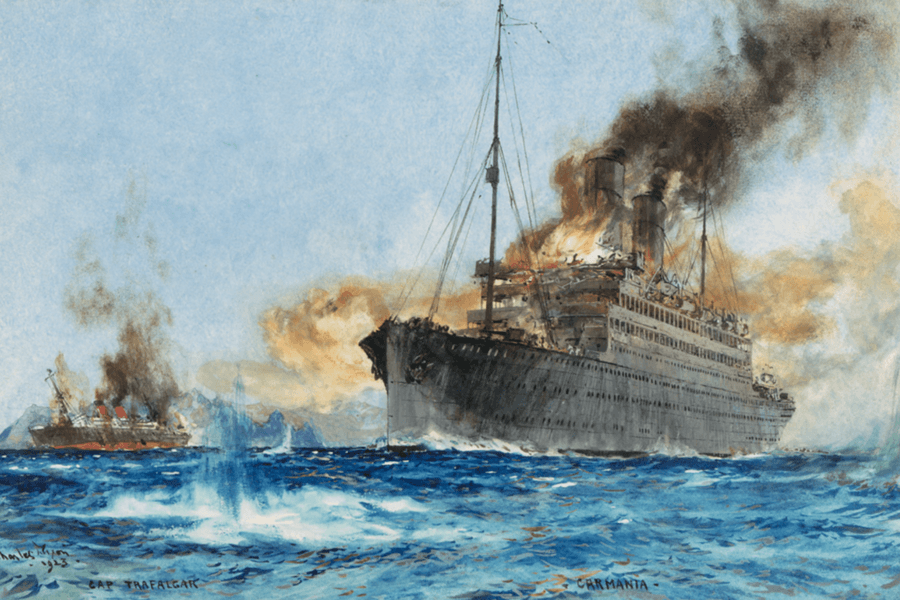 Charles Dixon / Royal Museums GreenwichA depiction of the battle between the RMS Carmania and the SMS Cap Trafalgar.

Created to expand the scope of international travel on open waters, ocean liners have served many purposes throughout their history — including as warships. Perhaps one of the most famous examples of such a ship is the RMS Carmania.

One of the first luxury liners to be turned into a ship fit for battle, the Carmania was stationed off the coast of Brazil at the beginning of World War I. While searching for merchant raiders in the waters near Trindade Island in September 1914, the vessel came across something odd: another ship painted to look just like the Carmania.

It was the SMS Cap Trafalgar, a German warship that had also previously been an ocean liner. The Carmania and the impostor ship met in battle in the South Atlantic on Sept. 14, 1914 — and the Carmania came out on top.

The Early History Of The RMS Carmania

The Carmania was built in the early 20th century by John Brown & Company of Glasgow, Scotland for the Cunard Line. It launched in February 1905 and completed its maiden voyage from Liverpool to New York City on Dec. 2, 1905.

According to SS Maritime, the Carmania was fitted with a luxurious first-class lounge, a music room with a domed glass ceiling, and a dining saloon with space for 300 guests. The ship could carry more than 2,500 passengers on its set route between Liverpool and New York, and it even once carried writer H. G. Wells to America. 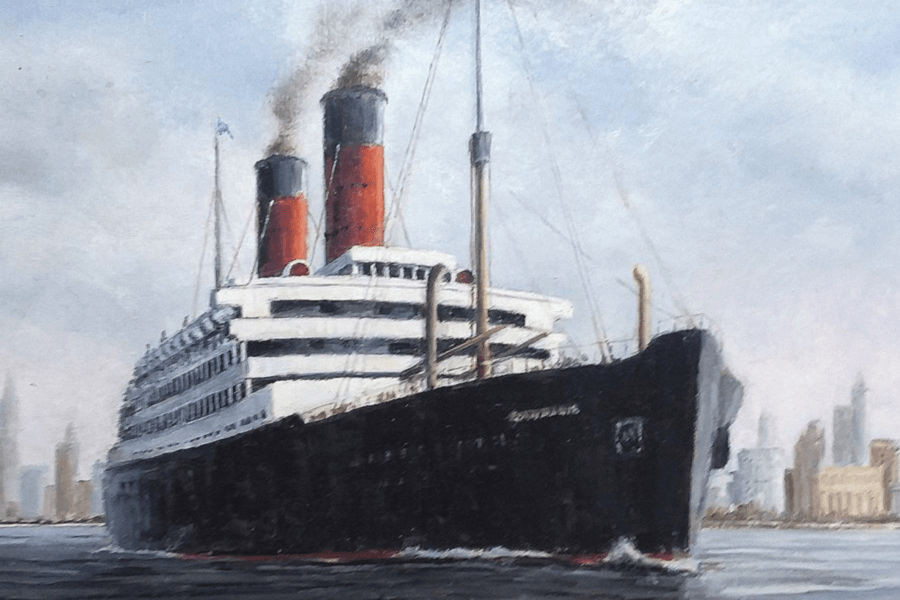 In 1913, the Carmania made headlines for its role in the rescue of 521 passengers from the SS Volturno, a Canadian Northern ship that caught fire in the North Atlantic. A year later, the vessel would make headlines once again for an entirely different reason.

In August 1914, according to Great Ships, the Carmania was requisitioned as an armed merchant cruiser for use during World War I. It was fitted with eight naval guns and sent to South America to locate merchant raiders — where it met the SMS Cap Trafalgar.

The SMS Cap Trafalgar also began its life as a luxury ocean liner. Built in Hamburg, Germany in 1913, the vessel was made to carry 1,600 passengers between Hamburg and South America in style.

With a swimming pool, a greenhouse, and delicate gold filigree throughout, the Cap Trafalgar was the epitome of opulence. When World War I broke out shortly after its maiden voyage, however, the lavish ocean liner was repurposed into a warship, just like the Carmania. 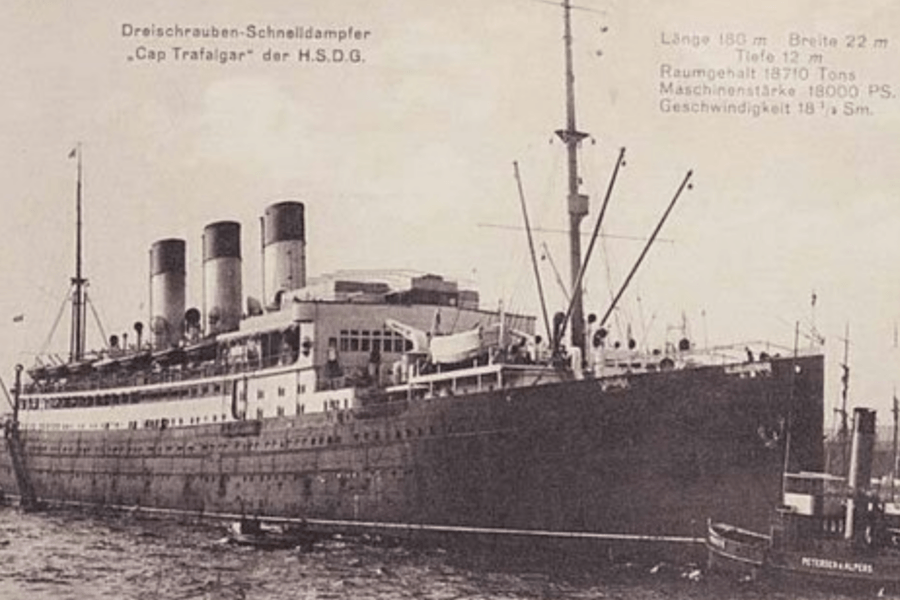 The Wreck SiteAn image of the SMS Cap Trafalgar before it was disguised to look like the Carmania.

According to the Royal Museums Greenwich, when the Cap Trafalgar was undergoing its refitting, one of its three funnels was removed — the Carmania had only two — and the others were painted red with black tops, also to match the Carmania.

The SMS Cap Trafalgar was stationed off the coast of Brazil in order to interfere with British shipping. Flying under a false flag, the vessel intended to lure in British ships, then attack them. Unfortunately for the Cap Trafalgar, however, one of the first ships it came across was the actual RMS Carmania.

The RMS Carmania Versus The SMS Cap Trafalgar

The Carmania was traveling near Trindade Island on Sept. 14, 1914, when its captain noticed the Cap Trafalgar from four miles away around noon. When he realized the vessel was disguised as the Carmania, he fired upon it — and the battle began.

It was all over within two hours. According to The Archive, the Carmania took 79 hits, which tore 304 holes in the ship and killed nine crew members.

While the Cap Trafalgar took 73 hits, it was riddled with 380 holes, and just before 2 p.m., it started to sink. The captain ordered sailors to abandon the ship, and at least 16 men died, including the captain himself. The other 270 crew members were captured by the Royal Navy. 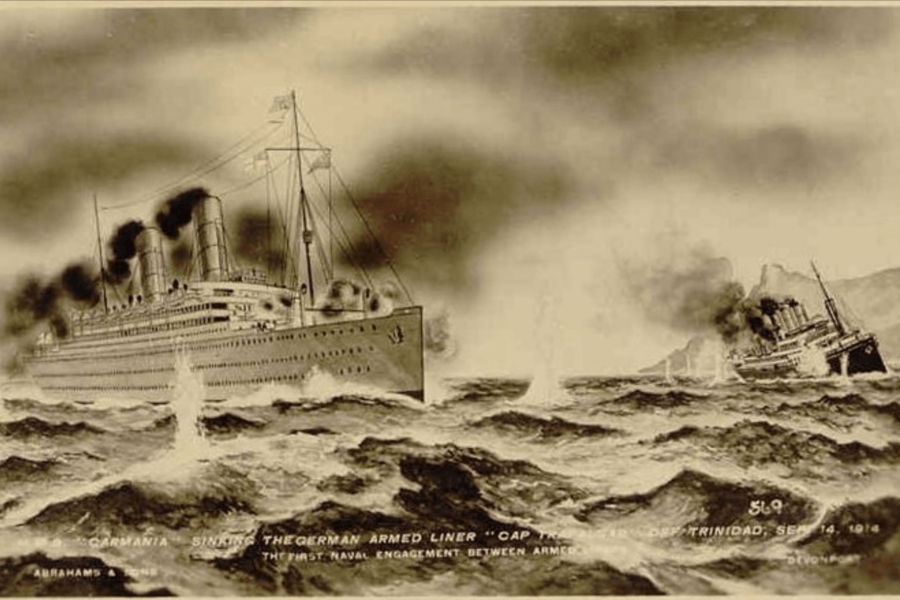 The Philatelic Society of Trinidad & TobagoA postcard depicting the battle between the Carmania and the Cap Trafalgar.

The Carmania had emerged victorious, but not without great damage. The ship headed slowly toward land, and the crew was rescued the following day by another British vessel, which escorted the Carmania to a Brazilian island.

The conflict was the first of its kind between two luxury ocean liners-turned-warships, and the SMS Cap Trafalgar went down in history as the first such ship to be sunk in battle.

But although the RMS Carmania was damaged, its time at sea wasn’t over yet. After it was repaired, it returned to its original Liverpool to New York service in 1916 and remained on the route for seven more years. Then, its engines were converted from steam turbines to oil-burning, and it returned to another North Atlantic route.

The Carmania sailed its final journey from London to New York in July 1931 and was sent to shipbreakers the following year. Though it spent just 26 years at sea, the legacy of the RMS Carmania as the luxury ocean liner that defeated another ship in battle lives on.

After learning about the RMS Carmania, read about the Vasa, the Swedish warship that sank after just 20 minutes. Then, discover the story of the SS St. Louis, the Jewish refugee ship that was turned away wherever it went.