The Story Of The RMS Olympic, The Titanic Sister Ship That Narrowly Escaped Tragedy Twice

The elder Titanic sister ship, the RMS Olympic was just as lucky as its nearly identical twin was unlucky. 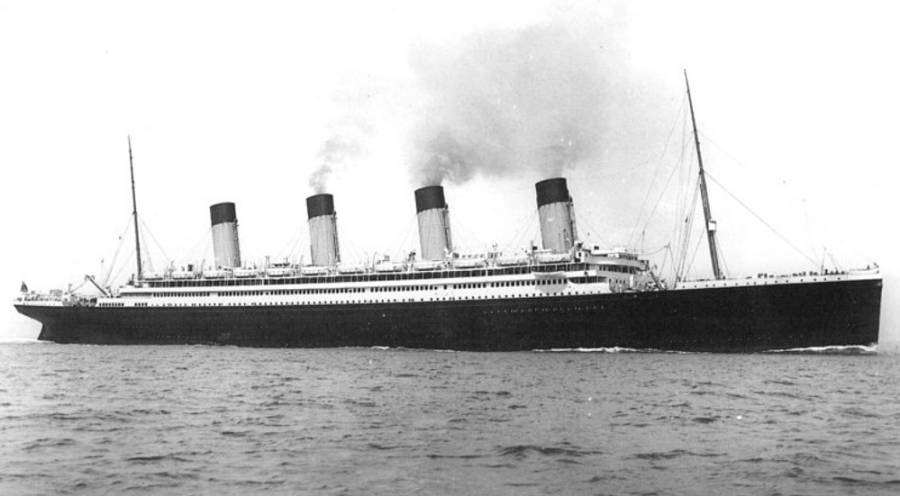 Wikimedia Commons The RMS Olympic in 1922.

The Royal Mail Ship Olympic, or RMS Olympic, was not nearly as famous as its younger sister, the Titanic — but its life was almost as remarkable.

The Olympic was as lucky as the Titanic was unlucky. It completed dozens of oceangoing voyages over a span of 24 years and even survived naval warfare in World War I. It narrowly missed total annihilation on multiple occasions — and only avoided its sister’s fate thanks to astonishing coincidence.

The RMS Olympic: The Oldest Of Three Sisters

The Olympic was the first of three nearly identical ships built by the White Star Line in Great Britain. The company was competing with its fiercest rival, the Cunard Line, for domination of the trans-Atlantic shipping lanes between Europe and America.

The industry had made enormous strides in recent years. Gone were the old wooden sailing ships. New metal hulls made for powerful vessels, and huge coal-fired boilers turned gigantic propellers, enabling ships to carry thousands of passengers and tons of cargo at once.

White Star’s answer to Cunard’s Lusitania and Mauretania was a triumvirate of luxury ships: in order of construction, the Olympic, the Titanic, and the Britannic. 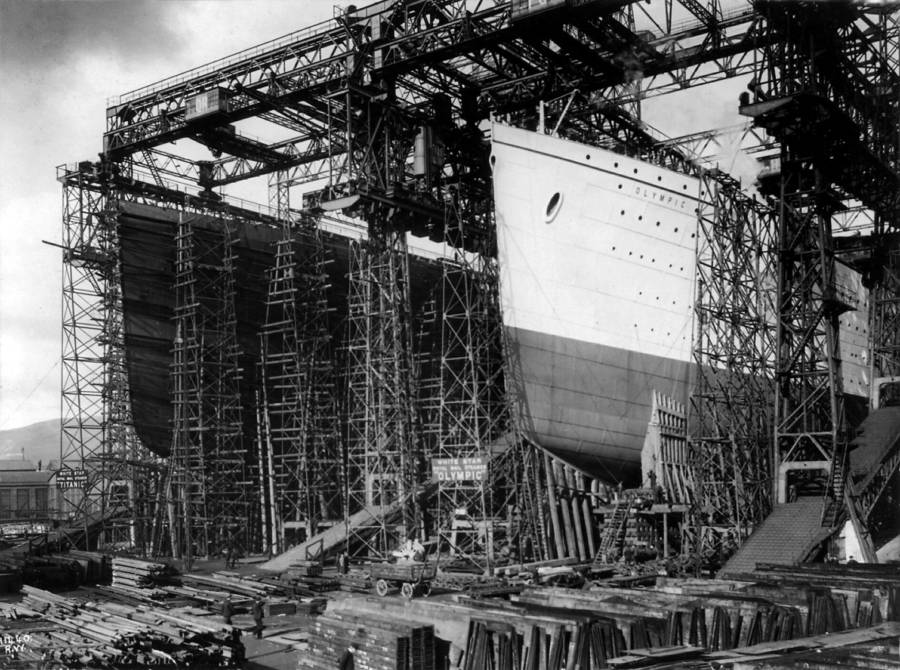 Flickr The Olympic (right) and the Titanic under construction in Belfast. Circa 1910.

Designers laid down the keel of the RMS Olympic on Dec. 16, 1908, in Belfast, Ireland, at the dry dock of Harland and Wolff. Work on the hull and main superstructure finished nearly two years later.

When the glorious ship launched on Oct. 20, 1910, it was the largest ship in the world. Though it would cede that title one year later to the ill-fated Titanic, the differences were minimal: The RMS Olympic was just three inches shorter and weighed only 1,000 tonnes less.

When the Olympic hit the water, it was the largest man-made moving object in the world.

The First Voyage Of The RMS Olympic

After completing its sea trials, the RMS Olympic was ready for its maiden voyage on June 14, 1911. The mighty ship took off from Southampton, England, and met with summer seas and calm, open waters.

The ship covered between 430 and 540 miles per day and arrived in New York City just five days, 16 hours, and 42 minutes after its departure from England.

Given that the ship was 852 feet long, 92 feet wide, and 65 feet tall, most ports were too small to accommodate it. When the Olympic was filled to capacity, it would disgorge up to 2,300 passengers onto the docks where it made port. 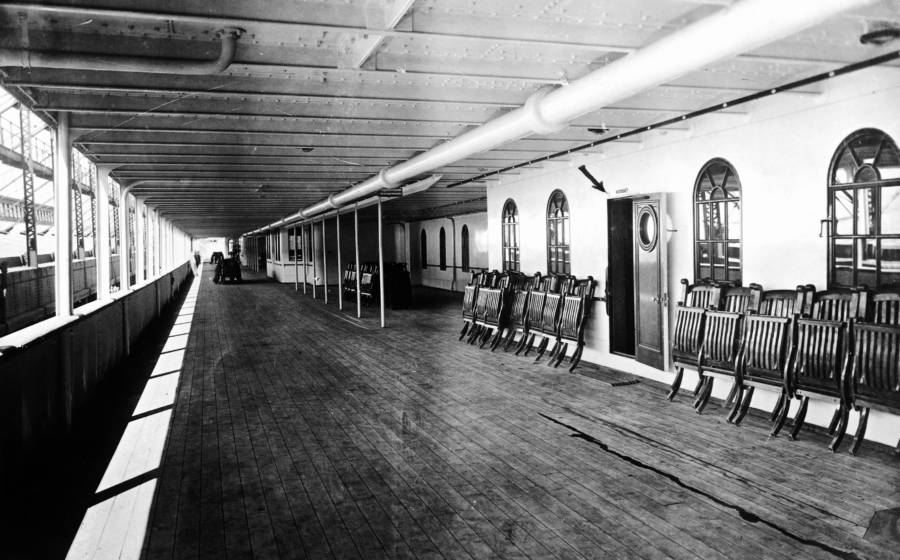 Wikimedia Commons The promenade on the deck of the Olympic.

Belfast, Southampton, and New York needed entirely new facilities to support this type of luxury liner — a complication that only added to the ship’s appeal. When the RMS Olympic docked in New York after its first trans-Atlantic crossing, the world knew it was the beginning of a new era of passenger transport.

Americans instantly fell in love with the bold new ship. Photographers were given full access to the vessel at New York’s Pier 59. Around 8,000 tourists were allowed inside to see the future of cruise ships. It was a glorious day for White Star and human ingenuity.

Among the slew of dignitaries, wealthy travelers, and adventurers who disembarked that day were the ship’s main designer, Thomas Andrews, as well as J. Bruce Ismay, son of the White Star Line’s founder, and Captain E. J. Smith — the man who had piloted the Olympic on its remarkable journey.

None of those men knew then that the ship’s revolutionary trans-Atlantic crossing would shortly be eclipsed in the history books by another historic voyage — a voyage only one of them would survive. 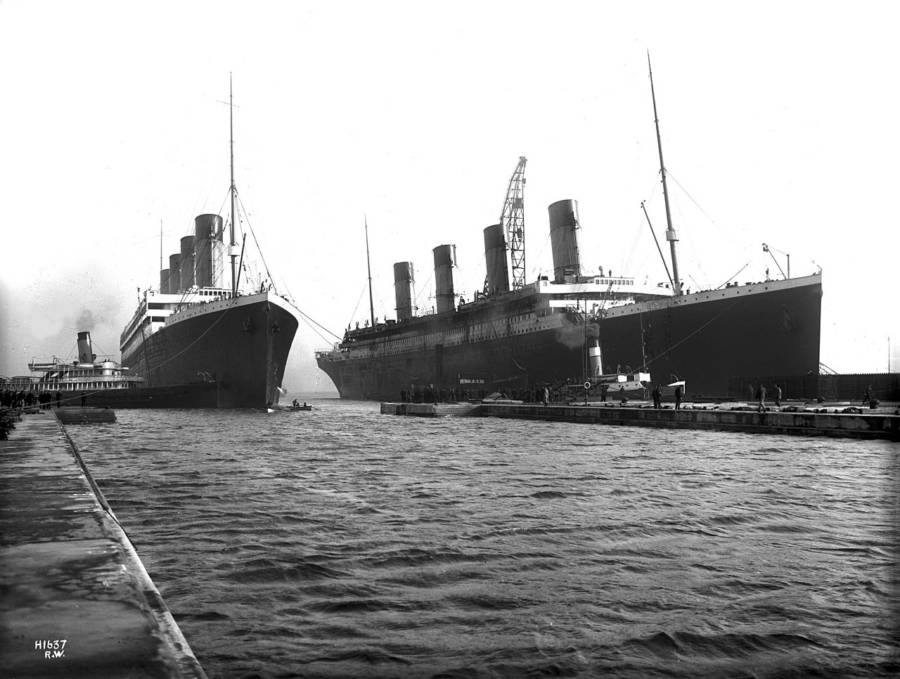 Wikimedia Commons The Olympic, on the left, next to its sister ship, the Titanic, on March 6, 1912, five weeks before the latter’s tragic maiden voyage.

Andrews, Ismay, and Smith were all on board the Titanic when it set sail on its disastrous maiden voyage. Smith captained the Titanic and famously went down with the ship. Andrews suffered the same fate. Ismay was the sole survivor of the three. 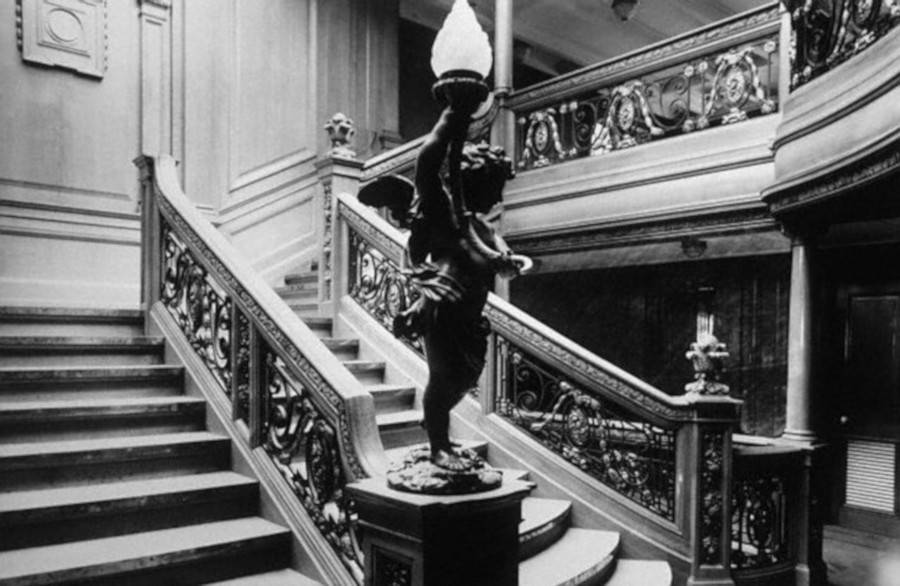 Wikimedia Commons The elegant grand staircase leading to the first-class salon on the RMS Olympic.

The RMS Olympic Collides With The HMS Hawke

On September 20, 1911, the Olympic left Southampton carrying 1,313 passengers and E. J. Smith was once again in command.

One hour and 20 minutes into the voyage, the passenger vessel came upon the HMS Hawke, a Royal Navy cruiser that was nearly 500 feet shorter, traveling in the opposite direction. Both vessels were moving through a narrow straight at roughly 16 knots when the Olympic began to turn.

The captain of the Hawke wasn’t expecting the bulky ship’s wide swing to the starboard. He found his smaller vessel drawn in by the suction from the larger ship’s propellers. As a result, the bow of the Hawke smashed into the side of the Olympic, gouging two massive holes in the metal hull. 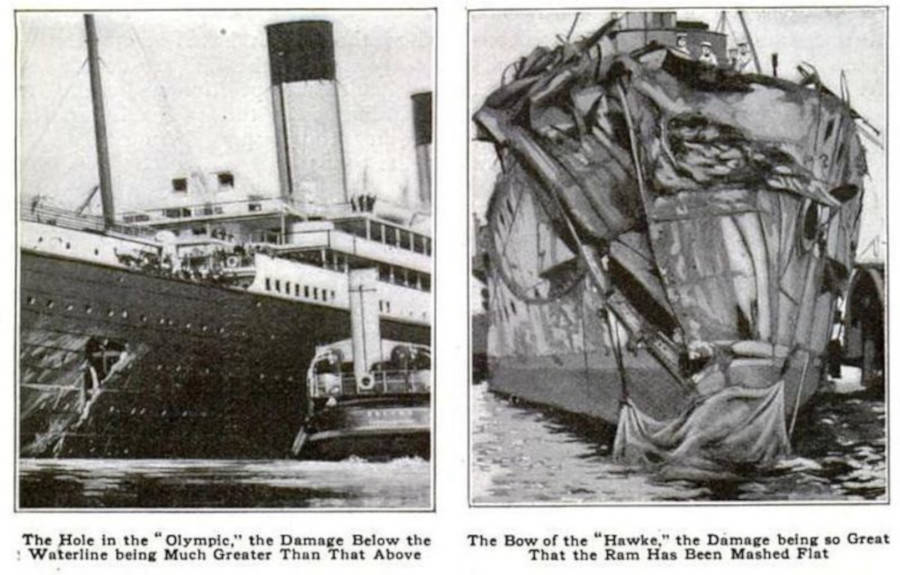 Wikimedia Commons Damage shown on the Olympic and the Hawke following their collision in 1911.

Two water-tight compartments kept the Olympic afloat. It had to return to port for repairs, and passengers had to seek other ships to make the crossing. The Hawke suffered greater damage: Its entire bow was peeled back.

But no one died in the incident, a fortunate circumstance that might, in retrospect, have set the stage for tragedy.

Though the collision was a wake-up call to people in the shipping industry, who learned they had to give these large vessels a wide berth, it also seemed to confirm the belief that these massive liners were unsinkable — a theory that fate would disprove in spectacular fashion with the sinking of the Titanic.

The Olympic was out of service for two months to undergo repairs. Workers took parts from the Titanic, still under construction, to patch its sister ship.

Three years later, colliding with a friendly ship would be the least of the repaired Titanic sister ship’s worries.

Footage of the Hawke colliding with the Olympic.

The RMS Olympic In World War I

The British government requisitioned the RMS Olympic to become a wartime transport in 1915 when the massive liner’s size made it a valuable carrier for troops.

But the luxury liner had already been doing its part even before that. In Oct. 1914, it rescued survivors of the HMS Audacious when the smaller ship struck a mine off the coast of Tory Island, Ireland. The Olympic took on 250 sailors and even tried to tow the Audacious to safety. The wrecked ship exploded after three failed attempts to tow it. 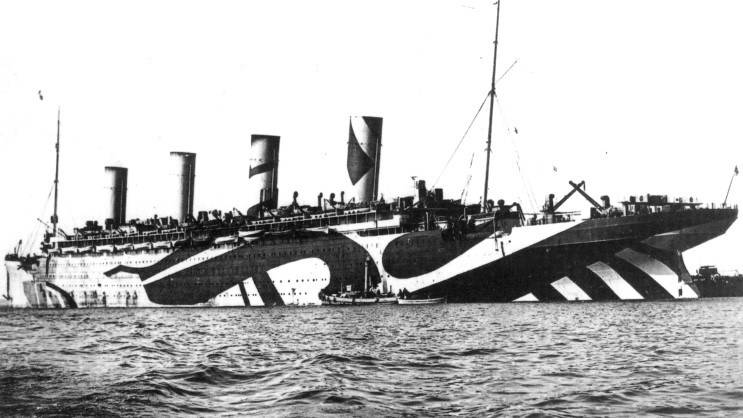 Wikimedia Commons The RMS Olympic with its wartime paint.

When the Olympic arrived in Belfast, the ordinary passengers on board were not allowed to leave for a week, because the admiralty wanted to suppress the news of the sinking of the Audacious. Their fear was that British citizens would panic if they found out German mines could cripple the country’s shipping.

The exigencies of war really hit the shipping industry in May 1915, when the Royal Navy pressed the Olympic into military service alongside the Britannic, the Lusitania, and the Mauretania. The rival ships were now fighting for the same team.

Workers stripped the Olympic of its luxurious appointments and converted it into a troop transport, complete with six-inch gun placements on the deck. By Sept. 1915, the ship was capable of holding 6,000 men.

In May 1918, the RMS Olympic stepped up its wartime service. Captain Bertram Hayes spotted a German U-boat, number 103, in the waters off the coast of England’s Isles of Scilly. Instead of avoiding the submarine, Hayes set a course straight for it and directed his crew to speed up.

The liner rammed the U-boat, catching the submarine just behind its conning tower. The damaged U-boat was flung into the propellers of the Olympic, which sliced it in half like a roast.

Hayes shunned protocol and didn’t pick up any survivors — a decision that later seemed vindicated when it was discovered that U-103 had intended to fire torpedoes at the Olympic and was only stopped by mechanical problems, which left it unable to flood its torpedo tubes in time.

It was luck that saved the passenger vessel from sinking and kept it from joining its sisters at the bottom of the ocean.

The remains of U-boat 103 were discovered in 2008. The damage done by the Olympic was still visible. This video shows footage of the wreck in the murky depths:

Scientists explore what’s left of U-boat 103 at the bottom of the ocean.

The Final Years Of Old Reliable

The Great Depression saw a sharp decline in trans-Atlantic passenger traffic. In order to survive, Cunard and White Star merged into one company. They were bitter rivals no more.

The Olympic was still Old Reliable — although one dramatic incident in 1934 very nearly changed that.

On May 15, the Titanic sister ship struck the Nantucket lightship near Cape Cod, Mass. The lightship was anchored there to mark the shoals and make navigating the coastline safer for passing ships.

But it wasn’t proof against heavy fogs like the one that covered the sea on the night of the 15th. The Olympic rammed the lightship bow-to-bow, cleaving the smaller ship in half. Seven of 11 crew members died when the lightship sank.

Investigators blamed the RMS Olympic for the accident.

The lightship’s surviving crew and captain discuss the incident.

For the Olympic, it was the beginning of the end. The ship was starting to look outdated. It was no longer the largest ship on the seas; larger vessels were carrying people faster, more efficiently, and more cheaply. The Great Depression, too, meant fewer passengers in general.

The Britannic, its last remaining sister, was already at the bottom of the sea, sunk on a mission to retrieve wounded soldiers by what most historians believe was a mine.

It was finally time for Old Reliable to retire.

A year after the fatal accident with the lightship, Cunard/White Star sold the Olympic for scrap to Sir John Jarvis, a member of Parliament. It took an entire year to dismantle the thick metal hull. 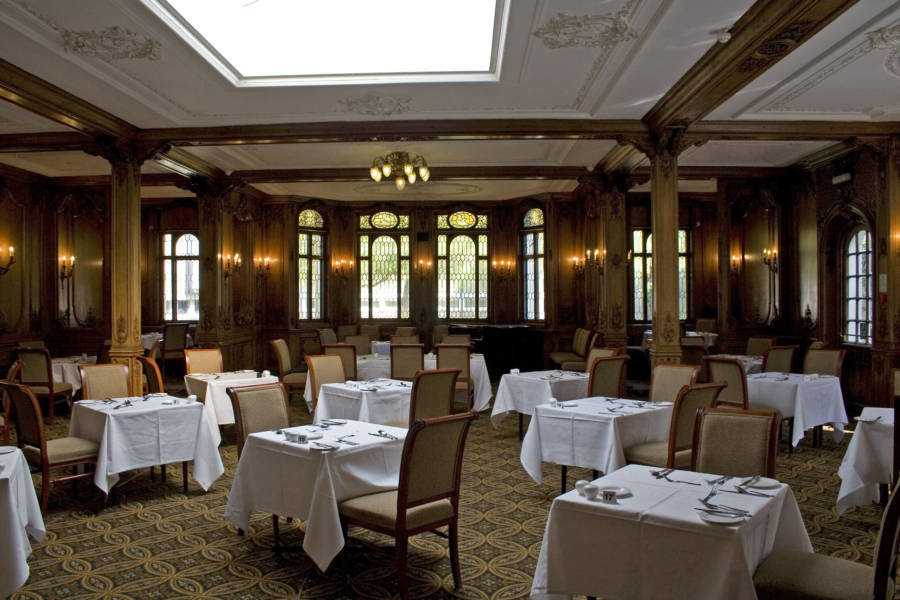 Some of its wood fittings were sold to hotels and establishments as decorations. To this day, patrons of England’s White Swan Hotel in Alnwick, Northumberland can see the original dining room of the Olympic at the inn.

The room’s paneling, mirrors, ceiling, and stained-glass windows are a reminder of the bygone era of luxury passenger ships — ships that also did their duty and saved thousands during the Great War.

The remains of the RMS Olympic are especially remarkable because they are all that’s left of a trio of sister ships that made an astonishing mark on the maritime world — and changed the course of human history.

After this look at the Titanic sister ship known as the RMS Olympic, learn the stories of those who survived the Titanic. Then, take a photo tour of the Titanic before and after its sinking.