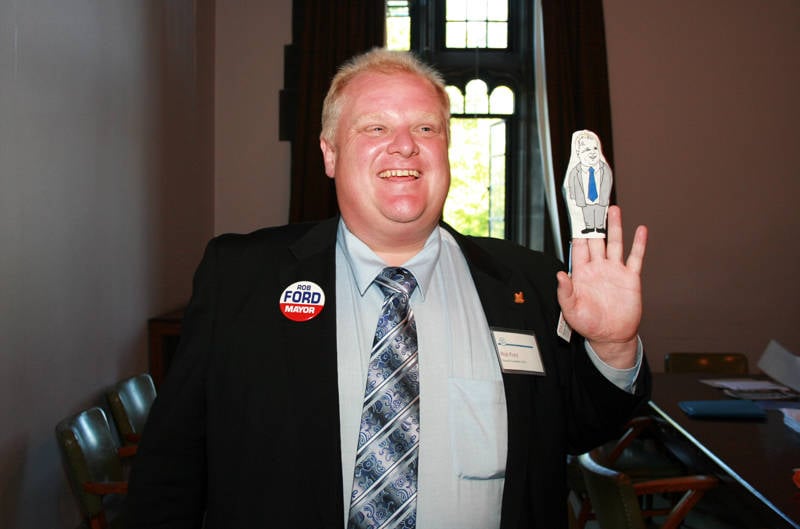 Shaun Merritt/FlickrRob Ford holds a finger puppet of himself. 2010.

Your city has probably had some crazy politicians over the years, right? Most cities have. But odds are, they had nothing on Rob Ford.

Rob Ford was the Mayor of Toronto from 2010 to 2014, and over the course of his political career, he made numerous racist and homophobic comments, saw his polls go up after it came out that he had been arrested for drunk driving, and was filmed smoking crack:

And those are just some of the countless Rob Ford scandals that would have ended any other politician’s career.

But in a way that would actually be kind of impressive if it wasn’t so ridiculous, Ford absolutely refused to give up on politics. And if it weren’t for a tumor that forced him to drop out of the re-election race in 2014, he might still be mayor today.

Rob Ford died in 2016 at the age of 46, bringing an end to one of the most insane political careers of all time. So in his memory, let’s look at some of the highlights of Ford’s life in public service.

Ford began his political career in 1997 when he made a run for Toronto’s city council. He came in fourth in that election but eventually managed to win a seat in 2000. In the years between, Ford was arrested in Miami for a DUI and possession of marijuana. Though the voters didn’t know about this arrest at the time of the election, it was an early sign of what Ford’s career was going to look like. 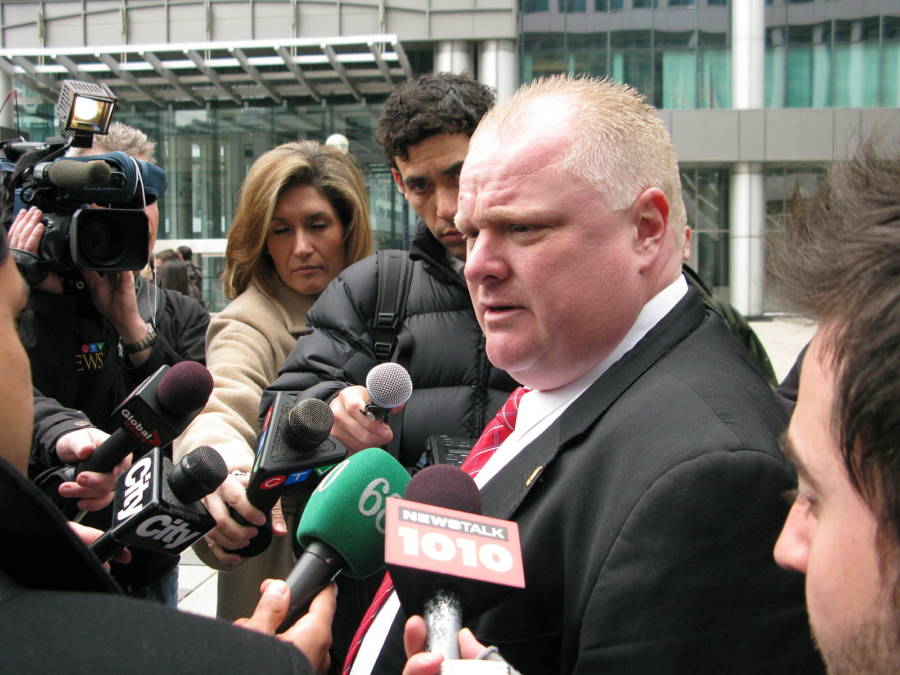 From the early days of his time in office, Ford campaigned on eliminating useless government spending. But Ford had some strange ideas about what exactly counted as useless spending.

For instance, the city council suggested putting protective barriers on a bridge that had seen several suicides. Ford suggested that the money would be better spent rounding up child molesters, “who are the main cause of people jumping off bridges.”

And in 2006, Ford argued against the city donating money to AIDS prevention because, “If you are not doing needles and you are not gay, you wouldn’t get AIDS probably.” When then-Mayor David Miller stated that women were the fastest-growing group of AIDS victims, Ford stuck to his earlier comments, saying “How are women getting it? Maybe they are sleeping with bi-sexual men.”

This wasn’t the last time Ford would put his foot in his mouth. He later stated at a council meeting that “Those Orientals work like dogs. I’m telling you, the Oriental people, they’re slowly taking over.” After the remarks resulted in a wave of protests, Ford reluctantly apologized. According to Ford, he had no idea the word “Oriental” was offensive, and more importantly, meant the statement as a compliment. 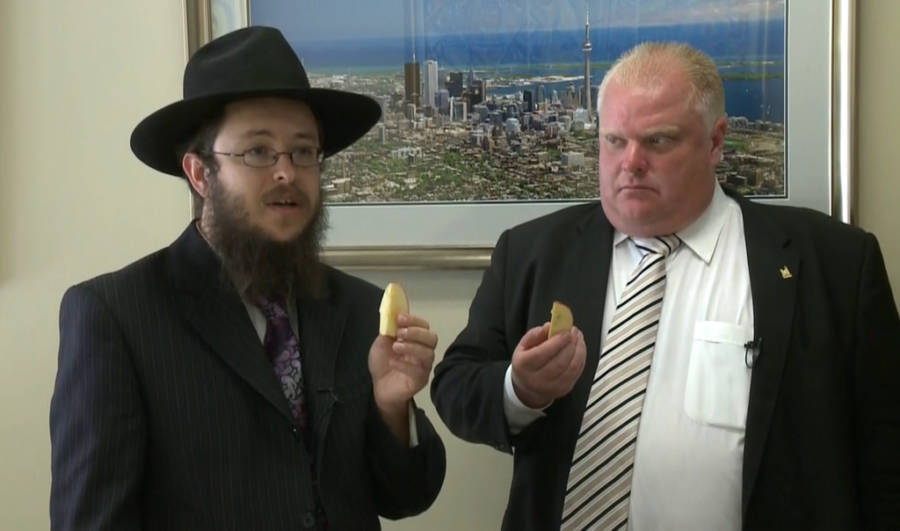 When controversial remarks weren’t coming out of Ford’s mouth, drugs and alcohol were going into it, which became a political issue after an incident at a Toronto Maple Leafs game in 2006. At the game, a couple complained about a very drunk man sitting near them who was shouting obscenities. As it turns out, that man was Rob Ford. After the press caught wind of the story, Ford apologized for having a few too many beers and promised it would never happen again… it would.

The issue of Ford’s drinking problem came up again when Ford ran for mayor in 2010. During the campaign, his earlier DUI arrest in Miami came out in the press. But somehow, this was actually a good thing for Ford. The arrest made Ford seem more relatable to the voters, apparently, and his poll numbers actually went up and he was soon elected.

If the voters were hoping that Ford would change his ways after his election, they would soon be disappointed. On St. Patrick’s Day 2012, Mayor Ford held a party in his office where he had way too much to drink. He then took the party to a restaurant, where he drank even more, did cocaine in a private room, and tried his hand at dancing. He then hailed a taxi back to city hall and made several racist remarks towards the driver on the way.

Back at City Hall at 2:00 a.m., Ford wandered the building with a bottle of brandy, loudly cursing at anyone who happened to cross his path. Security guards eventually had to show up to escort the mayor home.

In similar events, a drunken Ford later had to be removed from a formal ball he attended, was asked to leave an event celebrating the Canadian armed forces for being intoxicated, and allegedly groped a woman at another function.

Then, in 2013, Ford’s most infamous scandal came out. News outlets began reporting that the mayor’s dealer had filmed him smoking crack. Ford absolutely denied it. “I do not use crack cocaine,” he said. Furthermore, Ford said the video didn’t even exist. So, it must have confused the mayor when a video of him smoking crack eventually emerged on Youtube (see above).

With the evidence streaming into voters’ homes, Ford was forced to clarify what he meant when he said he didn’t use crack. When a reporter asked directly if he smoked crack, Ford said, “No, do I? Am I an addict? No. Have I tried it? Um, probably in one of my drunken stupors.”

This might have been the first time a mayor tried to defend himself for using crack by admitting he was frequently drunk. Immediately, people still began calling on Ford to resign, which he flat-out refused to do.

Ford’s career was then hit with another blow after some more accusations of sexual misconduct emerged. A female staffer reported that he asked her if he could perform oral sex on her. Ford denied these allegations, saying he was perfectly satisfied with his wife as far as that goes. “I’ve got more than enough to eat at home,” he said.

Even after these allegations, Ford was still planning to run for re-election in 2014. And in spite of everything, only around half of the voters actually wanted him to resign.

With his opponents splitting the rest of the vote, it actually looked for a brief time like Ford might win another term. Unfortunately, we’ll never know, as Ford was forced to step out of the race after being diagnosed with cancer.

While it didn’t seem to negatively affect his political career, his lifetime of substance abuse probably took a serious toll on Ford’s health. In the end, Rob Ford was a man with some serious personal issues. And while the voters were willing to forgive him, his body wasn’t. Just two years after leaving office, Ford’s cancer killed him.

After this look at Rob Ford, check out Donald Trump quotes you need to read in order to believe. Then, revisit the era when crack was king with this photographic look at 1980s New York.