From film to literature, these sensational fictional characters are actually more real that you would have thought. 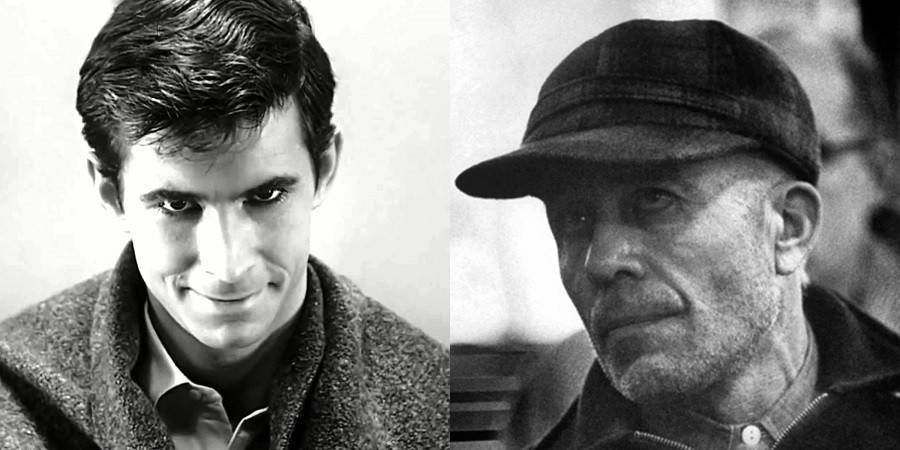 Norman Bates, the villain of the seminal horror film Psycho, was directly inspired by murderer and body snatcher Edward Gein.

Like Bates, Gein was intensely devoted to and warped by his mother’s fanatic religious teachings. His deranged disposition only became more severe after his mother’s death, at which point he began robbing graves, then butchering and mutilating women, and even creating furniture and clothes from skin and body parts.Wikimedia Commons 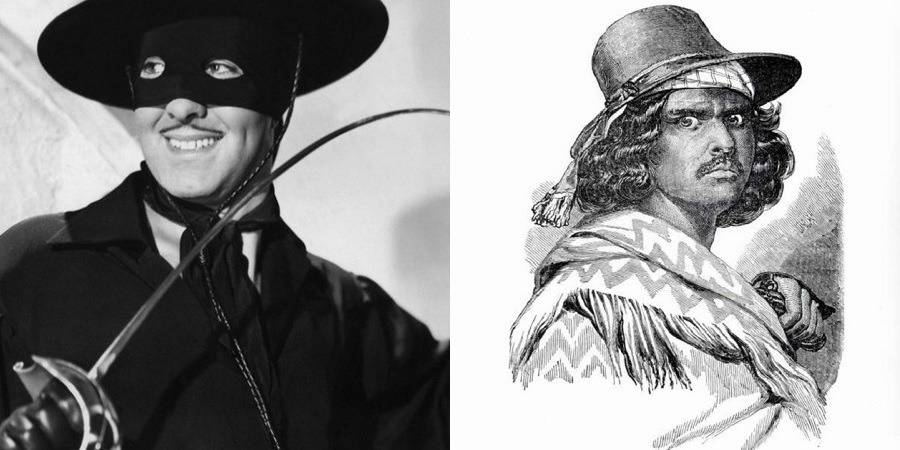 Author Johnston McCulley’s creation, Zorro, was likely based on Joaquín Murrieta, a Mexican miner who came to California to make his fortune in the 1800s.

When jealous miners attacked Murrieta and raped his wife, and police would not help him find justice, he took the law into his own hands. He created a band of men that carried out a string of retaliatory killings and bank robberies that only ended when he was killed by Texas Rangers in 1853.Douglas Fairbanks Pictures Corporation/Wikimedia Commons 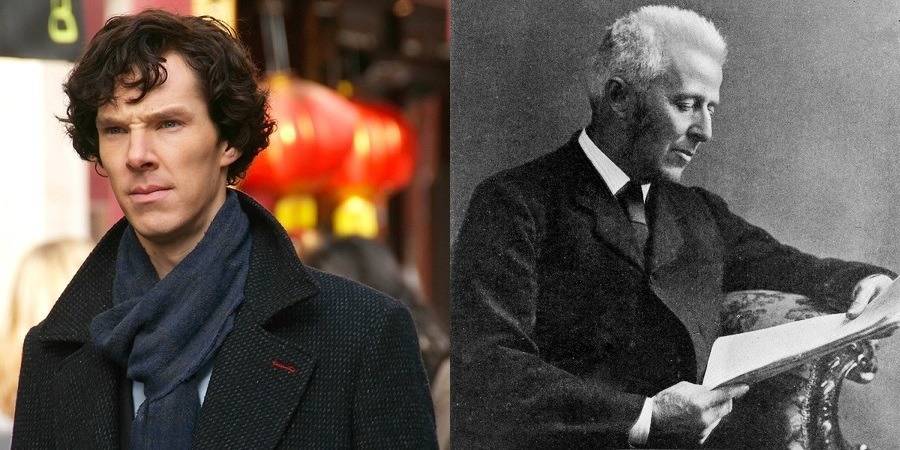 While attending the University of Edinburgh’s school of medicine, Sir Arthur Conan Doyle was taught by Dr. Joseph Bell, who became the basis for Doyle’s most famous creation: Sherlock Holmes.

Although Bell was a doctor rather than a detective, he excelled at analyzing patient backgrounds and was known to assist the police as a forensic scientist of sorts on some high-profile murders.BBC/Wikimedia Commons 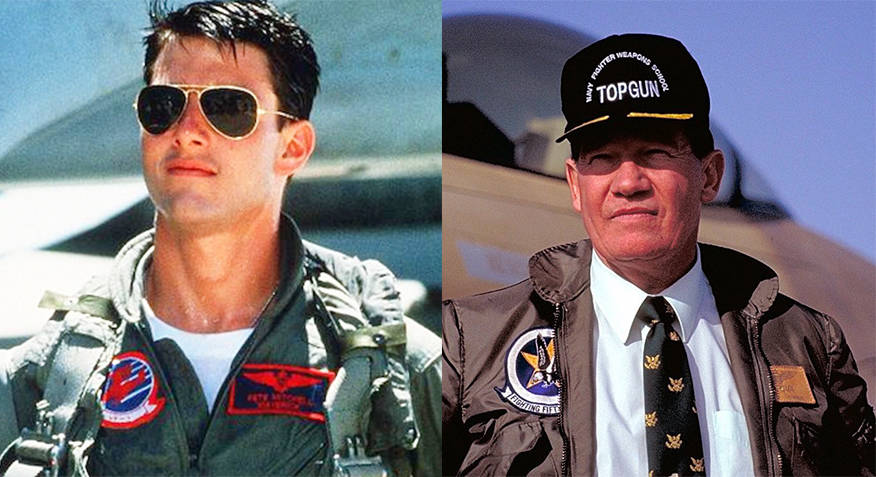 Lieutenant Pete "Maverick" Mitchell, the protagonist of the 1986 blockbuster movie Top Gun, may have been based on Randall “Duke” Cunningham. “Duke” received the Navy Cross, the Silver Star twice, and the Purple Heart as a Navy flying ace during the Vietnam War before becoming a TOPGUN instructor at the NAS Miramar base from the film.

After his time in the Navy, Cunningham became the Republican representative for California’s 50th district until he was arrested for accepting bribes and tax fraud in 2005.Paramount Pictures/Wikimedia Commons 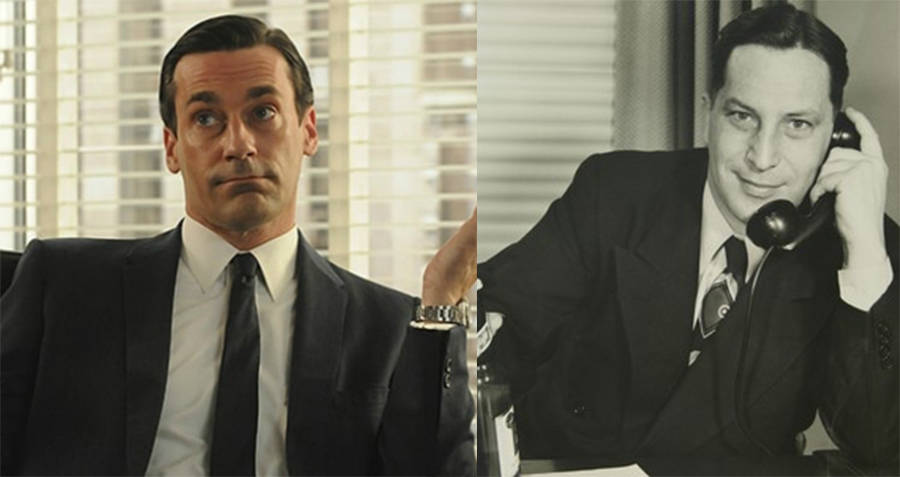 Matthew Weiner, the producer of the television show Mad Men, has admitted that the protagonist of his show, Don Draper, was based in part on real-life ad man Draper Daniels.

Outside of the similarities in their names, Daniels was a creative director at a major advertising firm in the 1950s and was a heavy drinker and smoker. Daniels also worked on a major ad campaign for a popular cigarette brand, just like Draper. Lionsgate Television/Personal photo 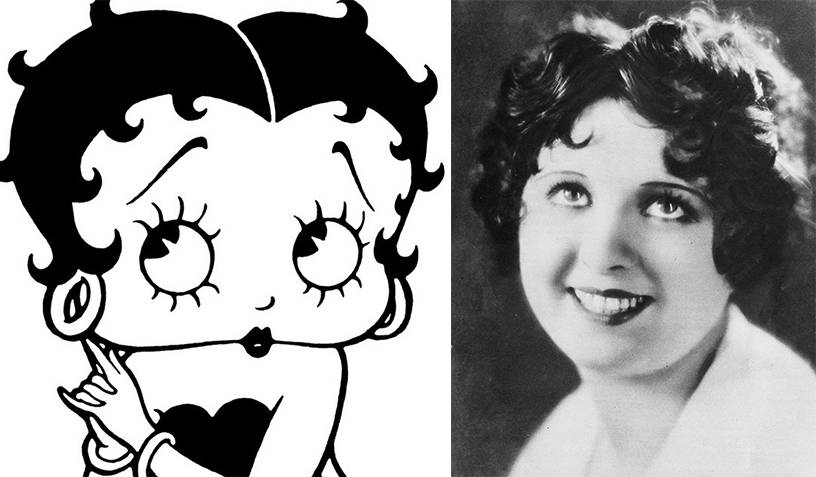 The beloved 1930s cartoon character Betty Boop was based on the appearance and mannerisms of singer and actress Helen Kane, who had a similar “baby” style. She also popularized the phrase that became Betty Boop’s catchphrase, “Boop-oop-a-doop.”

Kane sued the creators of Betty Boop over the copyright infringement in 1932 but lost after the defense revealed Kane had stolen much of her act from Baby Esther, an African-American singer who performed in Harlem.Paramount Pictures/Wikimedia Commons 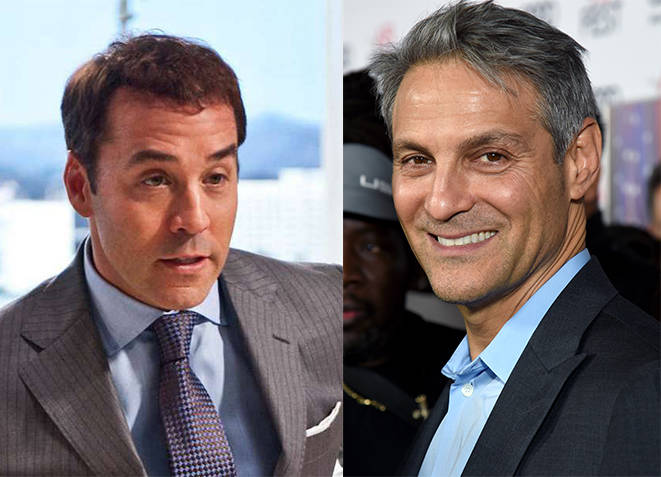 Possibly the most transparent of this list is the character Ari Gold, from the TV show Entourage who is based on Hollywood agent Ari Emanuel.

Emanuel was one of the agents who worked with Mark Wahlberg, on whose life much of the show is based on. He was also college roommates with Peter Berg, one of the executive producers on the show.Getty Images/Warner Bros. Television 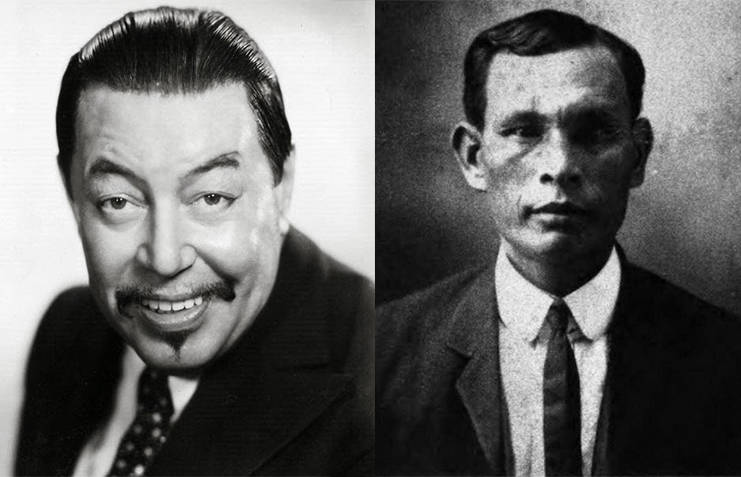 The character Charlie Chan is often remembered today for the frequent portrayal of him by White actors in yellowface, but he was originally based off of a real Chinese-Hawaiian policeman, Chang Apana.

Apana served as a detective with the Honolulu Police Department during the 1910s and 20s, where he patrolled the Chinatown area often armed only with a bullwhip. He had a distinctive scar on his eye from when he was attacked with a sickle and was discovered by Earl Derr Biggers, the author of the original Charlie Chan stories, when he heard tales of Apana’s exploits in Honolulu newspapers.Fox Film Corporation/Wikimedia Commons 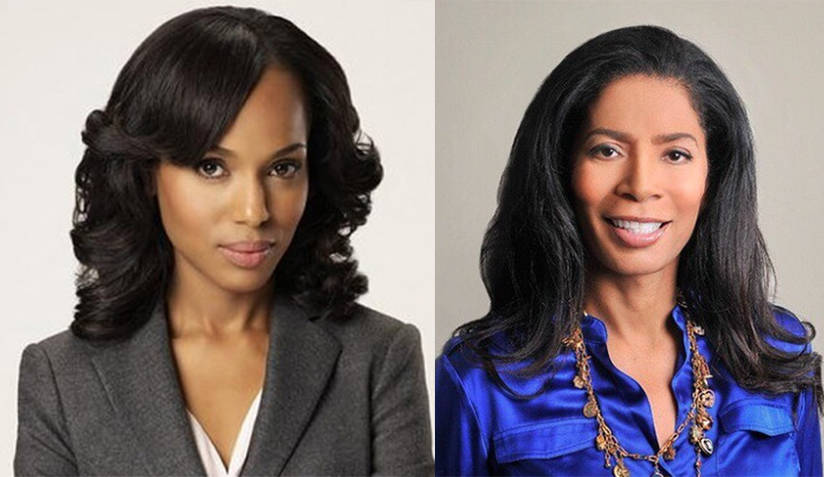 The protagonist of the show Scandal, Olivia Pope, is based on real-life Washington D.C. based crisis manager Judy Smith.

Dill From To Kill A Mockingbird 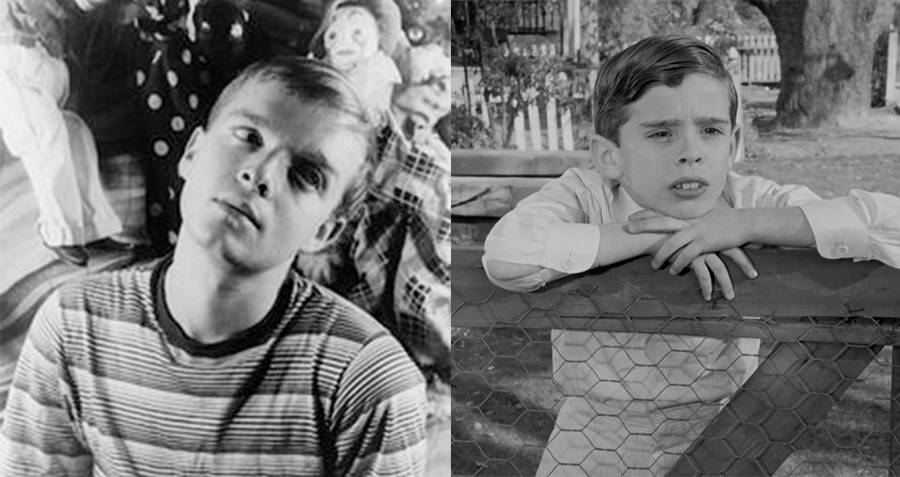 It may surprise you to know that the dorky kid next door from To Kill a Mockingbird was based on infamous crime writer Truman Capote.

Capote and author Harper Lee were next door neighbors, and remained close friends into adulthood, even traveling around the U.S. together. When Lee penned her famous novel, she added a nod to Capote as he was as a child, in the character of Dill. Wikimedia Commons/YouTube 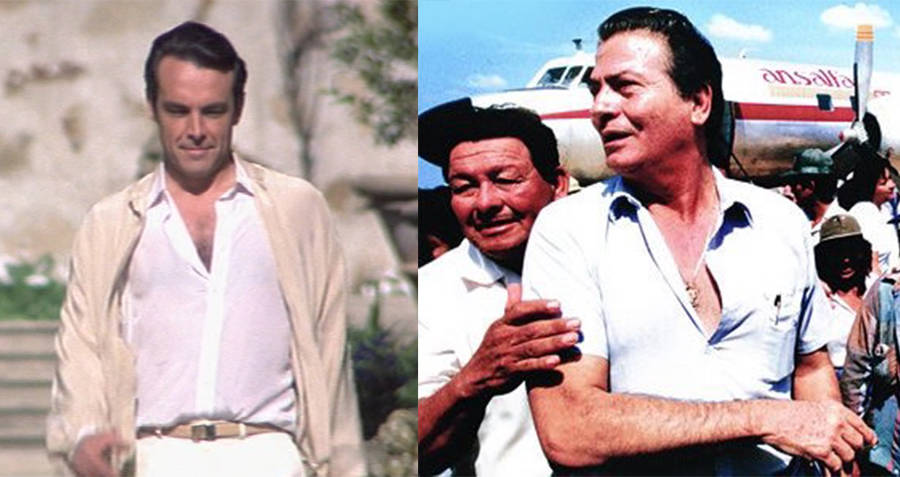 Alejandro Sosa, the Bolivian drug dealer from the iconic crime film Scarface, is actually based on Roberto Suárez Goméz, a Bolivian drug lord who was once known as the King of Cocaine.

Like Sosa, Goméz was a powerful Bolivian businessman with political and military contacts back home and ties to Colombian cocaine dealers. Universal Pictures/YouTube 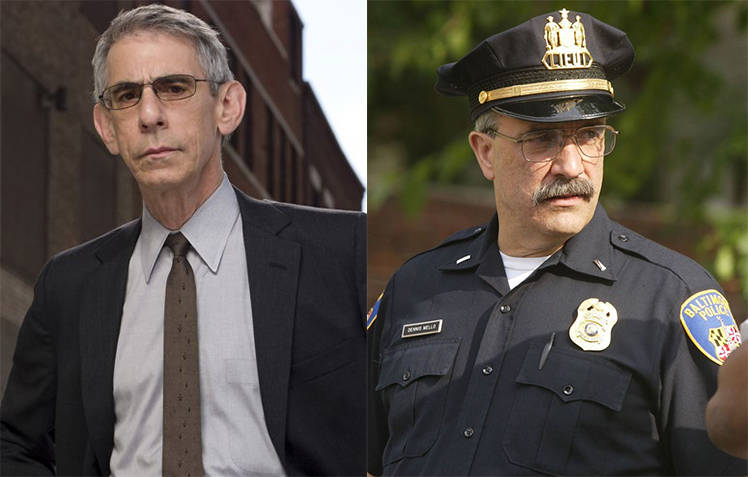 John Munch, the cynical detective first portrayed by actor Richard Belzer in the TV show Homicide and then in the wildly successful Law and Order: SVU, is based on real Baltimore police officer Jay Landsman. 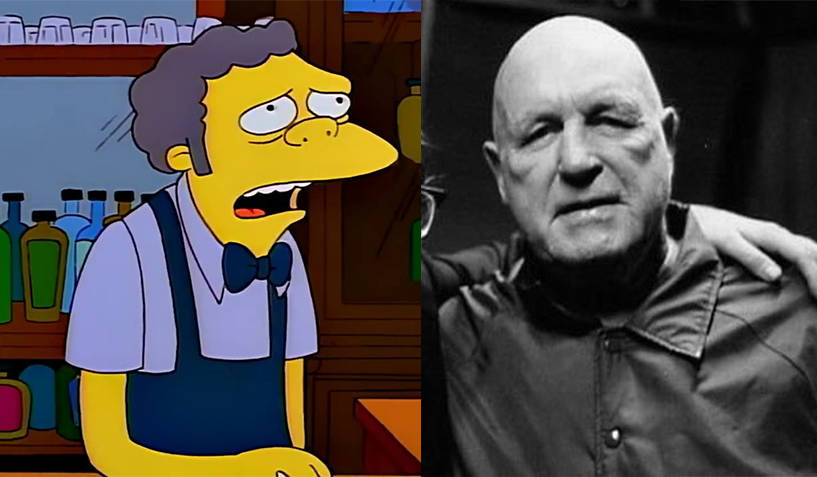 The sad-sack bartender from The Simpsons, Moe Szyslak, is actually based on Louis "Red" Deutsch, a bartender in Jersey City who came to prominence following a number of popular phone pranks being played on him by Bum Bar Bastards, a group of prank callers in the 70s.

Deutsch’s reactions of anger and threats inspired the dynamic between Bart Simpson and Moe, where Bart frequently prank calls him leading to a barrage of over the top threats. 20th Century Fox Television/Padded Cell Productions 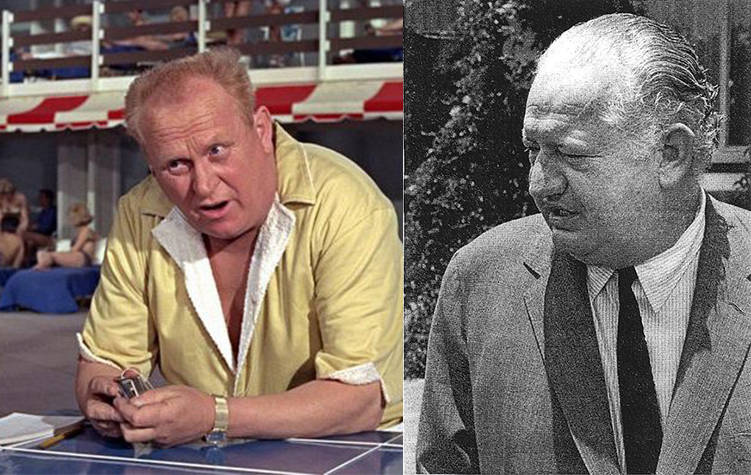 Auric Goldfinger, the main antagonist of the James Bond book, and movie adaptation, Goldfinger is said to have been based on American gold mining magnate Charles W. Engelhard, Jr.

Though the two do not share the same nationality, Engelhard’s appearance matched that of Ian Fleming's description of Goldfinger in the novel, as well as in his affinity for both British culture and gold. He was also close friends with Fleming and has been said to have been delighted by the characterization.Wikimedia Commons 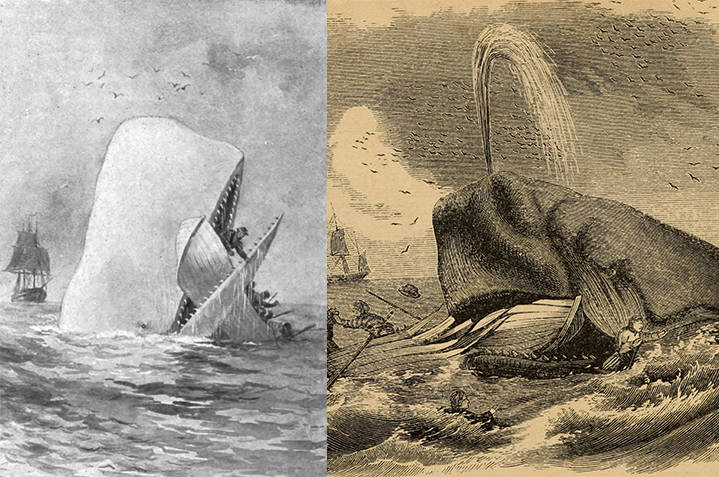 The only non-human on this list, the character of Moby Dick has gained an iconic status since his appearance in Herman Melville's 1851 novel of the same name. However unknown to most, the white whale from the Melville’s novel was based on a real albino whale that lived in the early 19th century: Mocha Dick.

Mocha Dick was a large, powerful whale that survived as many as 100 skirmishes with whalers before he was eventually killed. He was widely feared by harpooners and was only killed after he came to the aid of a distraught cow whose calf had just been slain by whalers.Wikimedia Commons

Many movies are accompanied by the phrase "based on a true story" when they feel the events they depict are close enough to reality to claim them as fact.

But what about the many fictional works that may have lone characters or events based on reality, while other aspects of the narratives are pure fiction?

Even many of those that were once obvious references to figures of popular culture have become more obscure as they outlive their own inspirations.

Hundreds of the characters from movies, TV, and books were once based on other, real people, but as they have become ubiquitous, we have begun to think of them as unique entities.

Here are some characters from fiction that you might not know where drawn from the lives of real people.

Next, check out the real-life hotel that The Shining is based on. Then, take a look at these nine X-Files episodes that were inspired by real-life events.