Robert Chelsea's long journey to receive a successful face transplant is a reminder of how few organ donors there are for people of color. He waited six years to find a match. 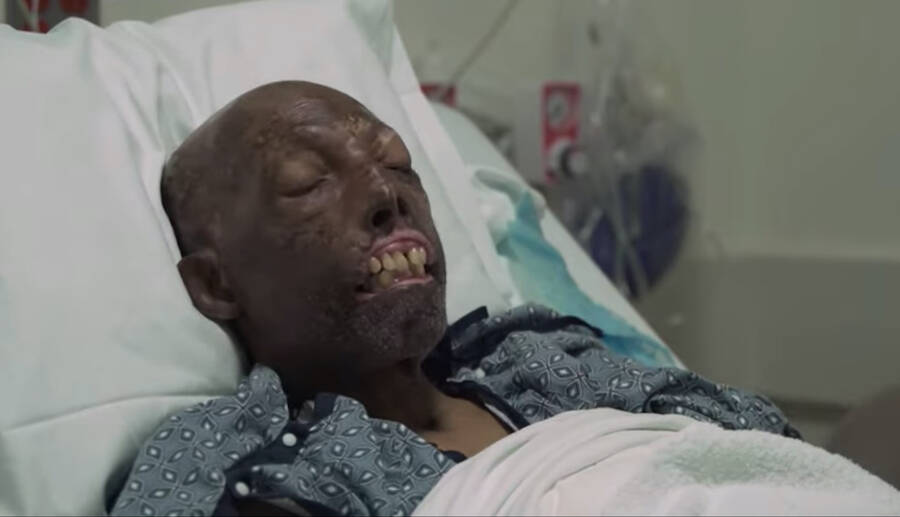 WCVB Channel 5 Boston/YouTubeRobert Chelsea received a face transplant offer in May 2018, but the donor’s skin tone had a much lighter complexion.

When Robert Chelsea was hit by a drunk driver in 2013, he had to face facts: The then-62-year-old African American would never look the same.

With burns all over most of his body and face, he’d be permanently disfigured, barring the off-chance a black donor on the face transplant waiting list matched his skin tone.

According to People, that happened in July 2019, when a 62-year-old black man on the organ donor list suddenly died. Chelsea, now 68, was naturally grateful for the gift, and appreciative of the man’s family.

“Losing a loved one and being asked something like this… I can’t imagine,” said Chelsea. “I do feel hopeful that I can pick up some of the pieces that the family may have lost.”

After six long years of doubt and a 16-hour surgery at Boston’s Brigham and Women’s Hospital, it seems he’s already well on his way. Chelsea is now successfully recovering — making him the first African American man to undergo a full face transplant procedure.

Reaching this historical milestone (and more importantly, receiving healthy, compatible tissue that would allow Chelsea to function in society) has been a long, difficult journey.

Previously, Chelsea underwent 30 surgeries in just a year and a half at the hospital, with doctors still failing to reconstruct his lips, left ear, and part of his nose. This made vital activities such as eating and drinking a constant burden.

He had to tilt his head back for every meal and beverage he consumed to make sure that nothing fell out of his mouth.

Even when a donor face was offered to him in May 2018, it was from a man with much lighter skin. Uncomfortable with the prospect of becoming “a totally different looking person,” Chelsea rejected the organ in hopes of getting lucky.

Chelsea isn’t alone in this particular struggle, either. Only 17 percent of black patients in need of an organ transplant received one in 2015, according to the U.S. Department of Health and Human Services Office of Minority Health.

That’s a stark drop from the 31 percent of white patients who typically do.

At 68, Robert Chelsea became the first black patient, & the oldest, to receive a full face #transplant. The 16-hour surgery, led by @pomahacMD, was the 9th face transplant procedure at the Brigham & the 15th nationwide. Read the @TIME story to learn more. https://t.co/uu9A1Vv8lw

“It is vitally important for individuals of all races and ethnicities to consider organ donation, including the donation of external grafts, such as face and hands,” said Alexandra Glazier, president and CEO of New England Donor Services.

“Unlike internal organs, the skin tone of the donor may be important to finding a match.”

According to TIME, Chelsea’s godson Everick Brown knew immediately upon completion of the procedure that his godfather would be content with the results.

Brown added that his godfather looked stunningly comparable to the way he looked before.

“It was a joy,” said Brown. “It’s the first time I’ve used the word miracle.”

While Chelsea’s reconstructed lips will never truly regain full function — as the nerve-rich tissue is difficult to recreate — the patient’s dream of kissing his daughter on the cheek is finally within reach.

Chelsea has become somewhat of a poster child for the organ donor cause, as the man had to wait six years to receive a transplant that worked for him. While he certainly still has more healing to do in the near future, he’s been back to the hospital for follow-up care and seems to be doing well.

“This experience has been an incredible journey for me, filled at times with many challenges,” he said.

“Today, however, I am thrilled to say that I’m on the road to recovery thanks to the incredible team of doctors and staff at Brigham and Women’s Hospital, the love and support of my family and friends, and my unwavering faith.”

Most remarkable, besides the medical advances that allow for full face transplants, was Chelsea’s expedient recovery. The man was able to speak, breathe, and eat on his own after just 10 days. He’s since been actively vocal about the importance of organ donation.

“I was concerned about humanity way before this surgery,” said Chelsea, who has started a nonprofit called Donor’s Dream. “We must help one another. That’s the way I felt, and this experience has only validated that even more.”

After learning about the first African American man to successfully receive a full face transplant, read about the military vet who received the world’s first penis and scrotum transplant. Then, learn about organ donor hearts — can they transplant memories?