Green Beret Roy Benavidez earned the Medal of Honor when he ran into enemy fire armed with only a knife to save his fellow soldiers, sustaining such severe injuries that medics placed him into a body bag.

When Roy Benavidez landed in Vietnam for his second tour of duty in 1968, he’d already proven his fortitude. Just three years earlier, Benavidez had stepped on a land mine during his first deployment in Vietnam, and doctors said he would never walk again. He defied their expectations — but his greatest test was yet to come.

On a sizzling day in May 1968, Benavidez heard the crackle of a radio and a desperate plea for help. A Special Forces team was trapped near the border of Cambodia, and Benavidez leaped into action. Without orders and armed with only a knife, he climbed aboard a helicopter.

Over the next “six hours in hell,” Benavidez would defy death again and again. Plunging into the jungle to rescue his fallen comrades and the classified information they carried, Benavidez battled the enemy, saved his fellow soldiers, and nearly lost his life.

This is his remarkable story.

The Incredible Determination Of Roy Benavidez 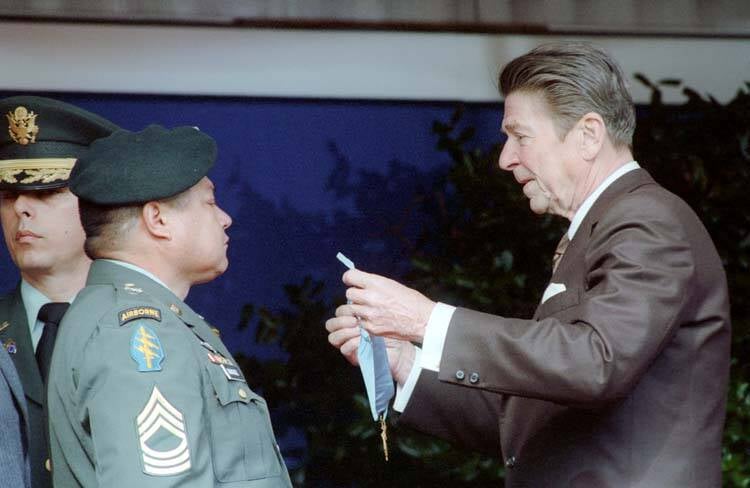 Ronald Reagan Presidential Museum and LibraryPresident Reagan presents the Medal of Honor to Master Sergeant Roy Benavidez at the Pentagon on Feb. 24, 1981.

Born on August 5, 1935, in Cuero, Texas, to a Mexican-American father and a Yaqui mother, Raul Perez “Roy” Benavidez had to get tough from the beginning. According to the National Museum of the United States Army, he lost both parents by the age of seven and was raised by relatives.

By his own account, Benavidez became a “tough, mean little kid” around the time his mother died. Taunted at school for being Hispanic, he often fought with other children who called him names like “dumb Mexican,” according to Legend: The Incredible Story of Green Beret Sergeant Roy Benavidez’s Heroic Mission to Rescue a Special Forces Team Caught Behind Enemy Lines.

Despite the taunts — or perhaps because of them — Benavidez was determined to make something out of himself. After dropping out of school at 15 to help support his family, he enlisted in the Texas National Guard. Then, in 1955, he transferred to the U.S. Army.

But after Benavidez served in the Korean War, spent time in Germany, and deployed to Vietnam, his military career seemed to come to a shocking, abrupt halt. In 1965, while in Vietnam with the 82nd Airborne Division, Benavidez stepped on a land mine. He woke up paralyzed from the waist down.

Though it seemed all but certain that Roy Benavidez would never walk again, the young soldier was determined to try. In the cover of night, out of the view of medical staff, Benavidez painfully trained himself to walk. To the shock of his doctors, he got out of bed one day and took a step.

Incredibly, Roy Benavidez then returned to the 82nd Airborne Division — and to Vietnam. Back in the conflict, he’d soon prove his grit yet again.

The Brutal Story Of The Soldier’s “Six Hours In Hell”

On May 2, 1968, Roy Benavidez was walking past a bunker in Lộc Ninh, an area on the border of Vietnam and Cambodia, when he heard a cry for help on the radio. A 12-man team deployed on a secret mission had run into trouble. They were outnumbered nearly 100-to-one, and three helicopters had failed to rescue them. 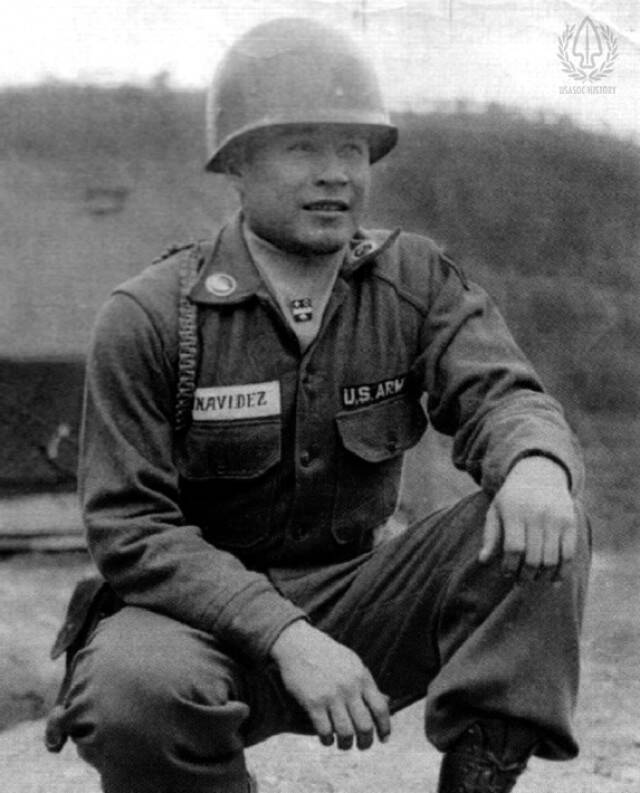 U.S. ArmyRoy Benavidez proved his bravery and toughness during “six hours in hell” in May 1968.

According to the National Museum of the United States Army, one of the trapped men was Sergeant First Class Leroy Wright, a soldier Benavidez knew well and who had saved Benavidez’s life just a month earlier.

“I’m in,” Benavidez said, according to Legend. Then, Benavidez — who other soldiers called Tango Mike Mike or “That Mean Mexican,” according to the Washington Post — grabbed an aid bag and a knife and clamored into a helicopter to try and save Wright and his men.

Acting without orders, Benavidez flew across the border to Cambodia. His helicopter couldn’t safely land — so Benavidez leaped to the ground and ran 75 yards through enemy fire toward the trapped men. Shot in the face and struck with shrapnel from a hand grenade, Benavidez nevertheless made it.

He didn’t know it yet, but his “six hours in hell” had just begun.

Despite his injuries, Benavidez took charge. He organized the survivors and tended to the wounded, then guided the trapped men toward the waiting helicopters, continuing even as he was shot in the stomach and hit with more shrapnel.

Over the next several hours, Benavidez carried the wounded to safety, gathered classified materials from the dead — including his friend, Wright — and defended himself in hand-to-hand combat. When an enemy guerilla stabbed Benavidez with a bayonet, “That Mean Mexican” pulled the blade from his arm and plunged his own knife into the man’s chest, killing him.

But the battle had taken its toll. Another soldier noticed that Benavidez was holding his intestines in with one hand, and he had so much blood on his face that his eyes were nearly crusted shut. According to the National Museum of the United States Army, he nevertheless checked once more for classified materials before getting on a helicopter.

Roy Benavidez had saved at least eight men. But he’d also been stabbed or shot 37 times, and his fellow soldiers thought that he’d succumb to his wounds. Medics were so sure that Benavidez had died that they started to zip him into a body bag — but not before checking for a heartbeat.

“When I felt that hand on my chest, I made the luckiest shot I ever made in my life,” Benavidez said, according to the Washington Post. “I spit in the doctor’s face.”

The Heroic Legacy Of Roy Benavidez

Though Roy Benavidez had survived his “six hours in hell,” he had a long road of recovery ahead and spent nearly a year recuperating from his injuries. In the meantime, he was awarded the Distinguished Service Cross.

Why Benavidez was initially awarded the Distinguished Service Cross and not the Medal of Honor is up for debate, however. Brian O’Connor, a Green Beret who witnessed Benavidez’s bravery, believes that the U.S. government didn’t want to draw attention to their clandestine operations in Cambodia.

In any case, Benavidez needed a living witness to his heroic actions, and it wasn’t until 1980 that the government realized he had one — O’Connor, who eagerly described Benavidez’s bravery. Then, in February 1981, Roy Benavidez was awarded the Medal of Honor by President Ronald Reagan. 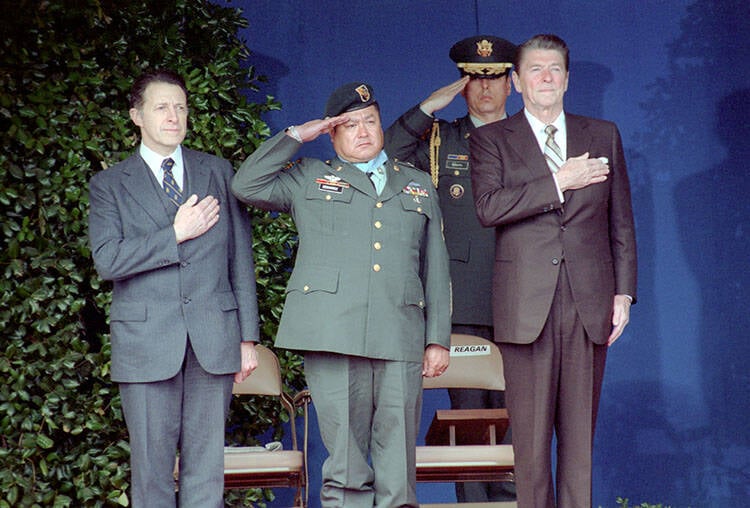 “Sergeant Benavidez’s gallant choice to join voluntarily his comrades who were in critical straits, to expose himself constantly to withering enemy fire, and his refusal to be stopped despite numerous severe wounds, saved the lives of at least eight men,” Reagan said at the ceremony.

“His fearless personal leadership, tenacious devotion to duty, and extremely valorous actions in the face of overwhelming odds were in keeping with the highest traditions of the military service and reflect the utmost credit on him and the United States Army.”

Though Roy Benavidez died on Nov. 29, 1998, at the age of 63, his legacy has re-entered the national conversation in recent years. According to the Washington Post, there was a push to rename Fort Hood, in Texas, after him.

Currently, the base is named for Confederate General John Bell Hood. But some have argued that it should be named for a Texas native like Benavidez and that doing so would honor minority servicemen. As of publication, no military bases in the U.S. are named for a Hispanic service member.

“Who we honor should represent our values,” Ty Seidule, a retired Army general who taught history at the U.S. Military Academy, told the Washington Post. “I don’t want to be like John Bell Hood. I want to be like Roy Benavidez.”

But Benavidez didn’t necessarily see it that way. According to The New York Times, he often shrugged off suggestions that he’d been a hero.

“The real heroes are the ones who gave their lives for their country,” he said. “I don’t like to be called a hero. I just did what I was trained to do.”

After reading about Roy Benavidez, discover the story of Adelbert Waldron, the Vietnam War’s deadliest sniper. Or, look through these stunning photos of the Vietnam War as seen by its fearless photographers.