Meet Simba, The Pakistani Goat With Ears So Long He Might Set A World Record

Simba the goat's ears are currently 23 inches long and have received attention from around the world. 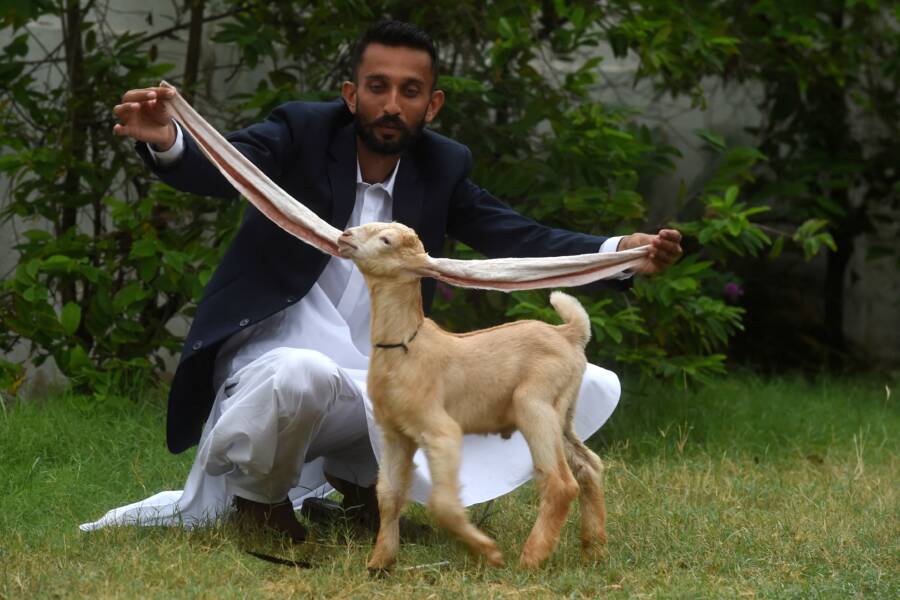 Photo by ASIF HASSAN/AFP via Getty ImagesSimba the goat with his owner Hassan Narejo in Karachi, Pakistan.

When Simba the goat was born on June 4, 2022 in Karachi, Pakistan, his owner Hassan Narejo was stunned by his long ears. And the Anglo-Nubian goat’s ears kept growing — and growing and growing. Now, his owner is appealing to Guinness World Records to come check Simba out.

“They have accepted our application,” Narejo announced, according to PEOPLE. “Within 10 to 12 weeks, a team of Guinness Book of World Records will be here in Pakistan to measure its ears.”

According to NPR, Narejo named the long-eared goat after his favorite Lion King character after his birth. And as Simba started to get bigger, Narejo noticed that his ears did, too. Simba’s ears were 19 inches long when he was born, and they kept growing.

About a week after Simba’s birth, Narejo posted a photo of the long-eared goat online — and Simba quickly went viral.

“Within 10 to 12 days of his birth, he was already appearing in all the national and international media — and won a beauty contest,” Narejo said, according to PEOPLE. He added: “Within 30 days, he became so popular that even a famous personality might take 25 to 30 years to achieve this level of fame.” 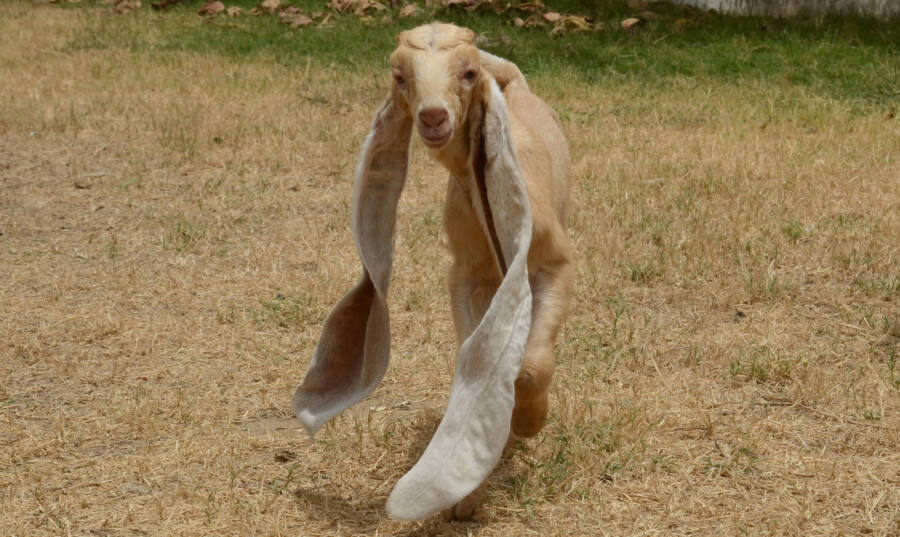 Yousuf Khan/Anadolu Agency via Getty ImagesSimba’s ears are so long that his owner has had to design a special pouch to hold them so that Simba doesn’t step on them when he walks.

Since then, Hassan Narejo’s life — and Simba’s, too — has changed completely. According to NPR, goat collectors in Saudi Arabia, Oman, and Pakistan have offered to pay any price to acquire Simba. But Narejo isn’t interested in selling the goat. Whereas his other 35 goats live outdoors, Simba lives in Narejo’s house with him.

“I have an emotional attachment to this goat,” Narejo said, according to NPR. “I bottle feed the goat myself and help him with exercise.”

Indeed, Narejo has grand plans for the little goat. “Simba’s Pakistan name must roam the whole world,” he said.

PEOPLE additionally reports that Narejo thinks Guinness should name Simba as the “Greatest of All Time” goat. Though Guinness has no such category (nor a category for goat ears), the organization is planning to send representatives to measure Simba’s ears.

In the meantime, Narejo is enjoying the boost of publicity. According to NPR, he works as a member of the ground staff of Qatar Airways at Karachi airport and raises goats in his spare time. But Simba’s newfound fame has resulted in an influx of offers to buy Narejo’s other goats.

That said, there is another side to Simba’s fame. Narejo is wary of ill-wishes from other goat farmers, and according to the BBC, he uses “prayer and traditional rites” to keep the little goat from harm.

“We recite Koranic verses and blow on him to cast away the evil eye,” Narejo said.

Simba has other problems as well. According to NPR, experts aren’t sure why Simba’s ears are so long — Anglo-Nubian goats typically have lengthy ears, but not as long as Simba’s — but the goat’s ear length could be hazardous for him. 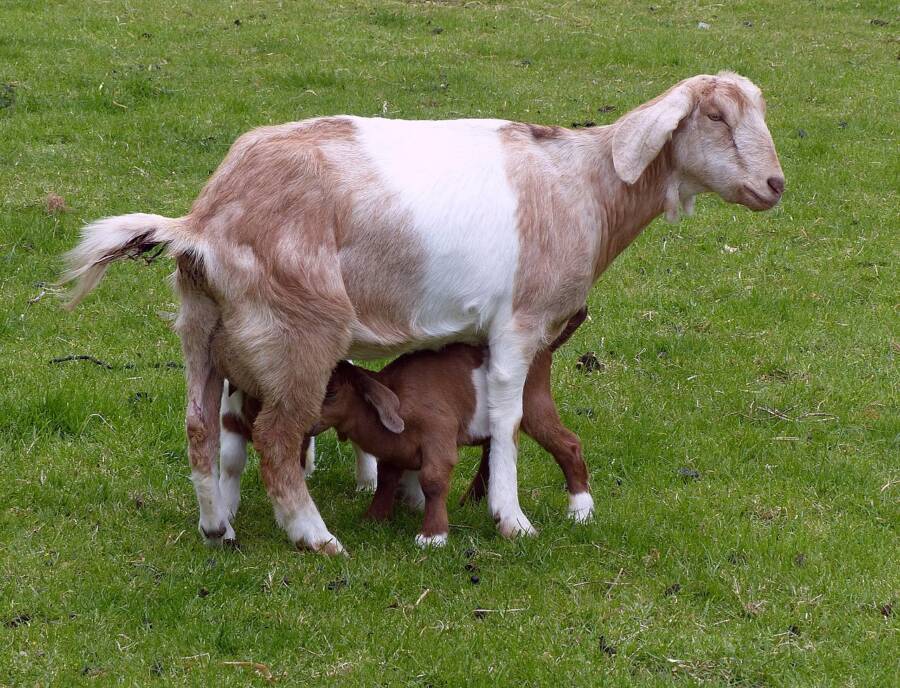 Wikimedia CommonsAn Anglo-Nubian goat with her kid. Both have “normal” length ears.

The BBC and NPR report that Simba is in danger of tripping on his ears, and dragging his ears on the ground could be bad for his health, as they may bruise and cause him pain. Narejo has found a solution, however, by ordering a pouch to tuck Simba’s ears into. He also cleans the goat’s ears with a velvet cloth.

For now, Simba’s future certainly seems bright. And Narejo is also pleased with the attention that Simba has brought to the goat-farming profession, which he says is often looked down upon in Pakistan.

“Goat farming is considered a profession only for uneducated people,” he explained to NPR. “This is no longer the case now. Simba gave this profession a whole new meaning and respect.”

After reading about the baby goat with giant ears, discover the story of the takin, the elusive cow-goat hybrid that roams the Himalayas. Or,
see how an American trophy hunter named Bryan Harlan sparked outrage in Pakistan by killing an endangered goat.