Meet The Takin, The Elusive Cow-Goat Hybrid That Roams The Himalayas

Though the takin can weigh up to 770 pounds and sport an unmistakable golden coat, this mysterious beast has remained largely out of human sight for centuries. 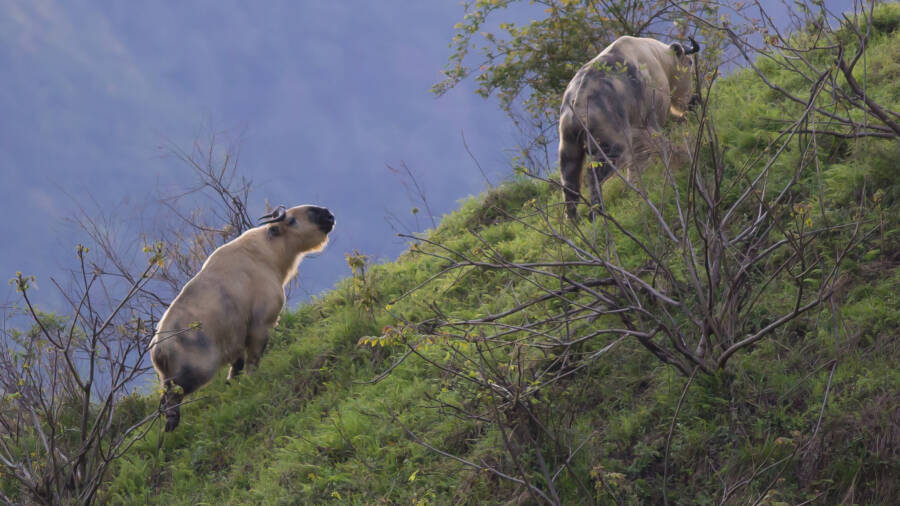 FlickrA pair of golden takins lumber up a mountainside.

Nestled away in the Himalayas is a gigantic, crescent-horned creature that nibbles its way through the alpine forest: the takin.

The takin looks like a creature out of a children’s book. A furry terrestrial goat-antelope, the striking creature features a long and bulbous snout, a sturdy and stocky body, four short legs, and formidable two-toed hooves.

But perhaps the takin’s most distinctive feature is its impressive size. The animal can weigh up to 770 pounds — and stands up to seven feet long. 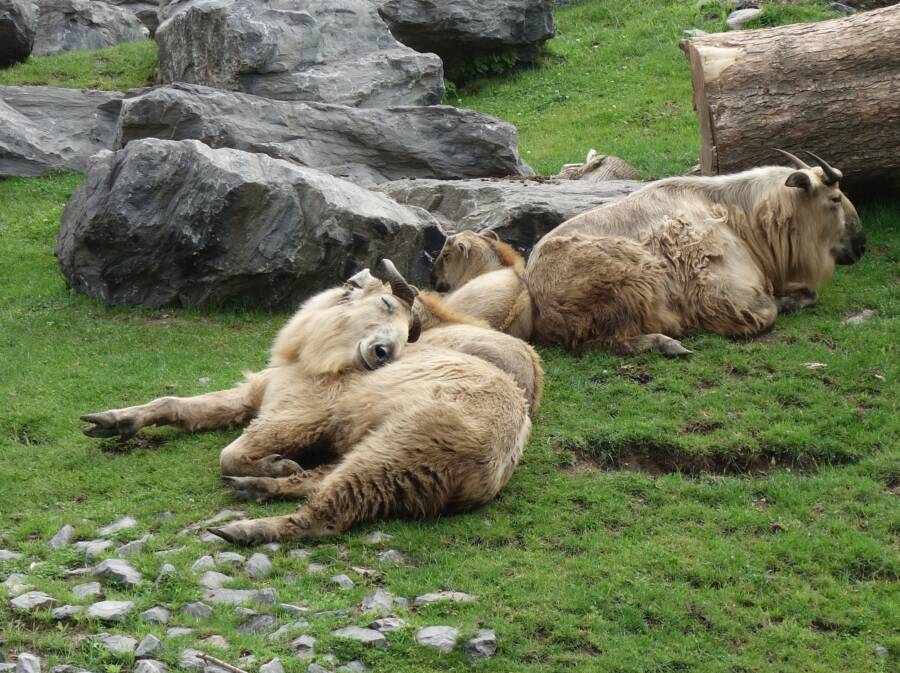 Indigenous to the mountainous areas of parts of India, Bhutan, and Myanmar, the takin is a mammal of the Bovidae family which includes goats, cows, sheep, and antelopes. It also shares some of its territories with the panda bear.

Though most closely resembling the musk ox or even a goat crossed with an antelope, the takin’s genetics are actually most closely aligned with that of wild sheep.

The takin’s unusual appearance displays a mash-up of characteristics from its bovid family, including a thick wooly coat that can range in color from a reddish-brown to a creamy white golden color. It has historically been referred to as a golden-fleeced cow for its shiny coat.

Its golden coat is so striking, in fact, that some believe the golden takin inspired the tale of the Golden Fleece in ancient Greek mythology. According to the myth, there was once a golden and winged ram known as Chrysomallos, who was a child of the god of the sea Poseidon and a nymph. 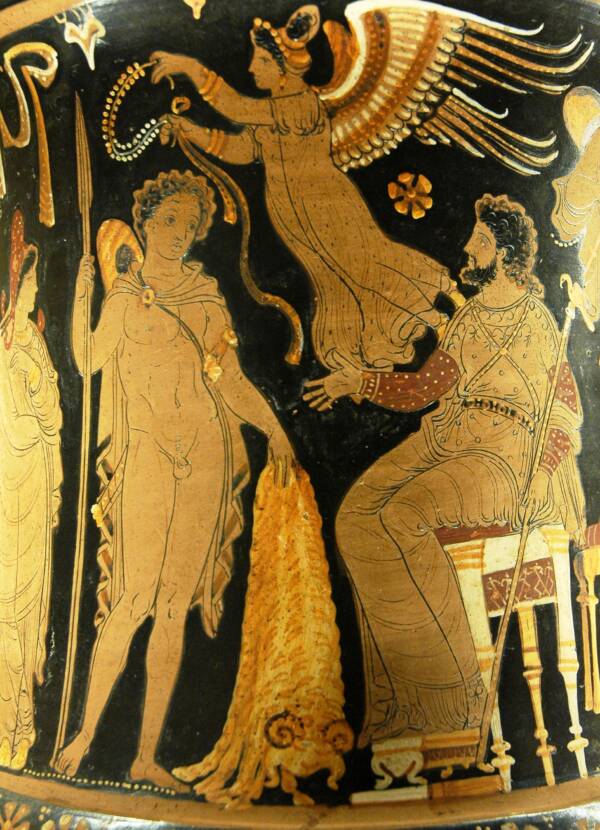 Wikimedia CommonsJason with the Golden Fleece.

Chrysomallos was sacrificed and its pelt mounted, and a hero named Jason was tasked with retrieving it in order to claim the throne to his kingdom. It is certainly not unreasonable that rumors of a rare and beautiful golden pelt could have made their way from the Himalayas to the coast of the Black Sea, where this myth originated.

Thriving In An Unforgiving Environment

Besides its magnificent fleece coat, the takin has other features that allow it to live in the cold, mountainous environment of the Himalayas.

One such feature is its odd schnoz, which has inspired a host of nicknames such as a “bee-stung moose,” “gnu-goat,” and “goat-antelope.”

But the takin’s nose actually helps it to maintain internal warmth. Indeed, its sizeable nose has a large sinus cavity where air can warm up before entering the animal’s lungs. This warm air helps immensely to keep everything inside the takin’s body warm and cozy.

Watch the enormous takin in its natural habit in China’s Qinling Mountains.

Another somewhat strange adaptation of the takin’s is the oil it secretes all over its body. The pungent, bitter oil creates a heat-trapping and water-resistant barrier that also allows it to easily mark its territory by simply wiping itself on nearby trees and grasses.

One biologist described this noxious oil as having a “burning taste.”

How The Takin Predates — And Hides

Despite its heft, the takin does have some natural predators and has developed a talent for camouflaging in the shrubby mountainside. It also warns its herd members to oncoming trouble through a low cough-like sound.

When the cough is heard, the entire herd will run and hide in nearby vegetation, usually bamboo groves, and other tall grasses. However, takins in captivity express a variety of burps and gurgles with their impressive noses to communicate with each other.

The elusive takin is a diurnal herbivore, which means that it feeds mostly at dawn and dusk, like other members of the Bovidae family. Herbivore means, of course, that it feasts solely on plants: bamboo shoots, flowers, and leaves. Takins eat a huge variety of plants, upwards of 65 different species, in fact.

The takin also travels to salt licks, which are an essential part of their diet. 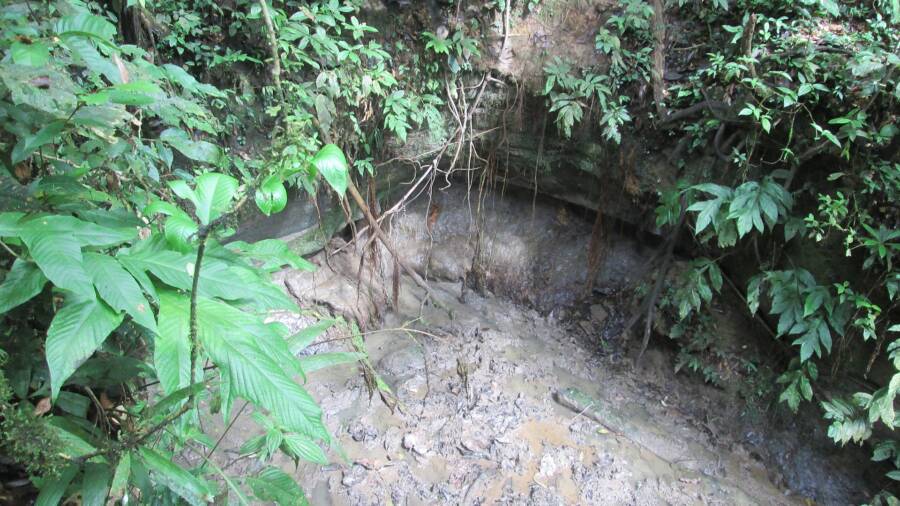 Wikimedia CommonsA mixture of clay and water known as a mineral lick which wild animals consume to supplement their diets.

Salt licks, or mineral licks, are places in a forest where there is a concentration of salt and other nutritious minerals in the ground. Many animals with mineral-deficient diets, like elephants, antelopes, and mountain goats, will gather at mineral licks.

For the takin, the salt and mineral licks are essential to their diets and therefore influence their migration patterns, as takins will move between licks. These minerals allow them to break down any toxic build-ups in their system from the various flora they eat.

Serious Threats To Their Survival 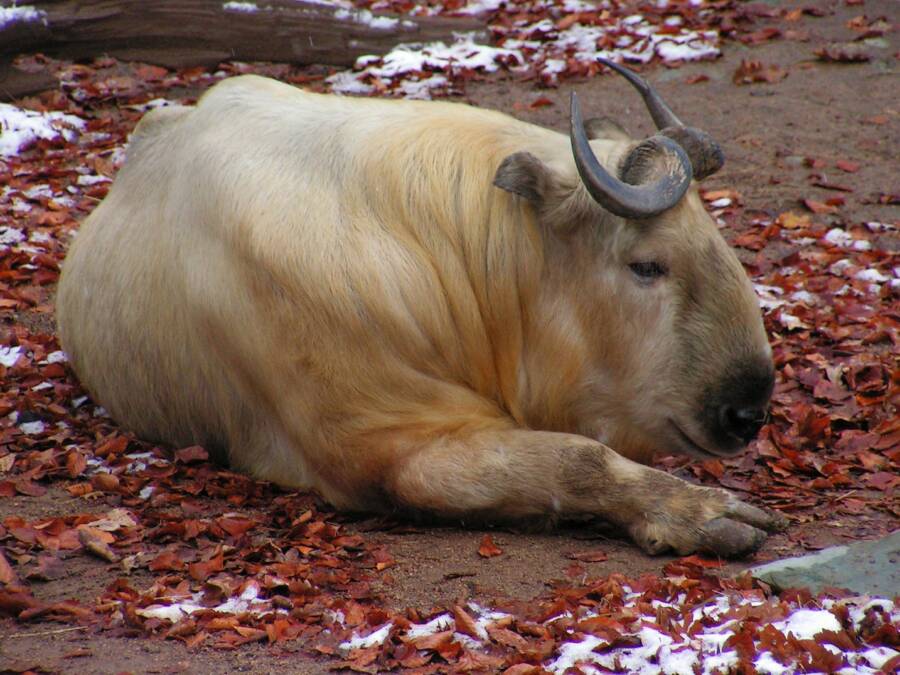 Takins are both solitary and communal creatures. Their herds can number up to 300 during mating season or when migrating to a very popular mineral lick. Generally, herds seem to be around 20 members. As the takin grows older, however, they tend to become more solitary.

These golden creatures perform courtship rituals similar to bighorn sheep by sparring and clashing with their horns. But beyond these displays, takins do not appear to be particularly aggressive. The few takins in captivity are known to be much like goats in their disposition, but with even more sass.

Because of their attitude and size, their caretakers do not enter their enclosures. 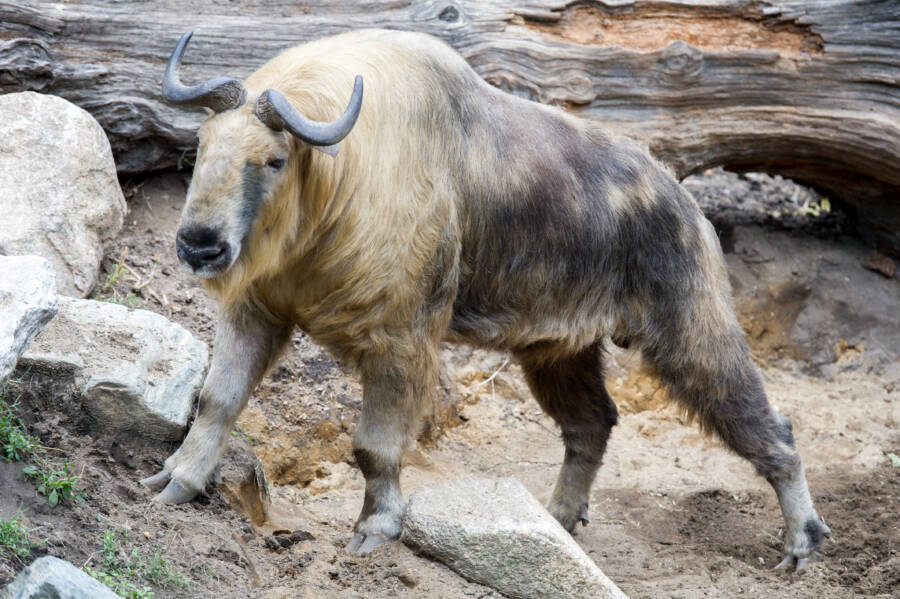 The greatest threats to the takin are humans, by means of habitat loss and poaching. Poachers seek out the takin to sell as exotic meat as well as for its beautiful horns and golden pelt.

But by far the greatest threat to takin survival is habitat loss. Their generally sparse populations are further dwindling, and its four subspecies are listed as endangered and vulnerable on the International Union for Conservation database.

China is making hopeful strides towards preserving not only the takin but many of its forest residents with the creation of the Laohegou Land Trust Reserve, in 2013.

The preservation of this 27,325-acre swath of land will help ensure that these marvelous creatures of the mountainous Asian forests are protected.