The reptile is a flapshell turtle, which is usually born with brown and green hues. 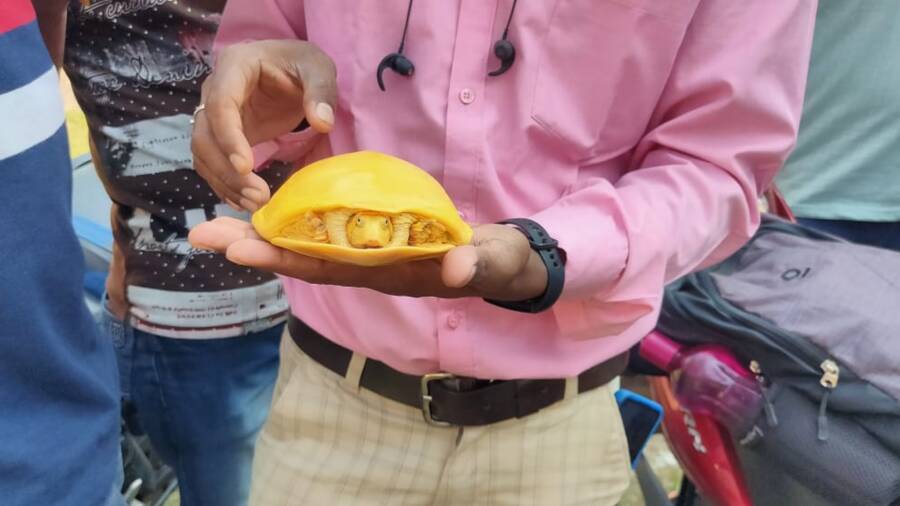 TwitterThis albino golden flapshell certainly looks like it should be sitting between two slices of bread.

The Indian Forest Service has just announced the discovery of a particularly strange kind of turtle — one that looks like a stack of molten American cheese.

Typically, this species of golden flapshell turtle is dark green and brown. But according to ScienceAlert, a genetic anomaly has caused its jarring appearance.

An Inside Edition segment on the yellow flapshell.

According to My Modern Met, the specimen was found by a farmer in the eastern Indian state of Odisha. Forest officials subsequently handed it over to conservationists.

Though striking to the layman, Siddhartha Pati, the executive director of the Association for Biodiversity Conservation, was not surprised by this bright turtle. According to Pati, the turtle is actually exhibiting a form of albinism.

“It is a congenital disorder and it is characterized by complete or partial absence of tyrosine pigment,” he said. “Also, sometimes a mutation takes place in the gene sequence or there is a deficiency in tyrosine.”

To untangle that somewhat complicated biological jargon, tyrosine is an amino acid, and it has many jobs, but chief among them in this case is the production of melanin. Melanin is a pigment that is responsible for human skin and eye color and it also dictates the color of a turtle’s shell.

But unlike with pure albinism, where a creature is completely colorless and features red or pink eyes, this turtle appears bright yellow because its yellow pigments dominated its color production. 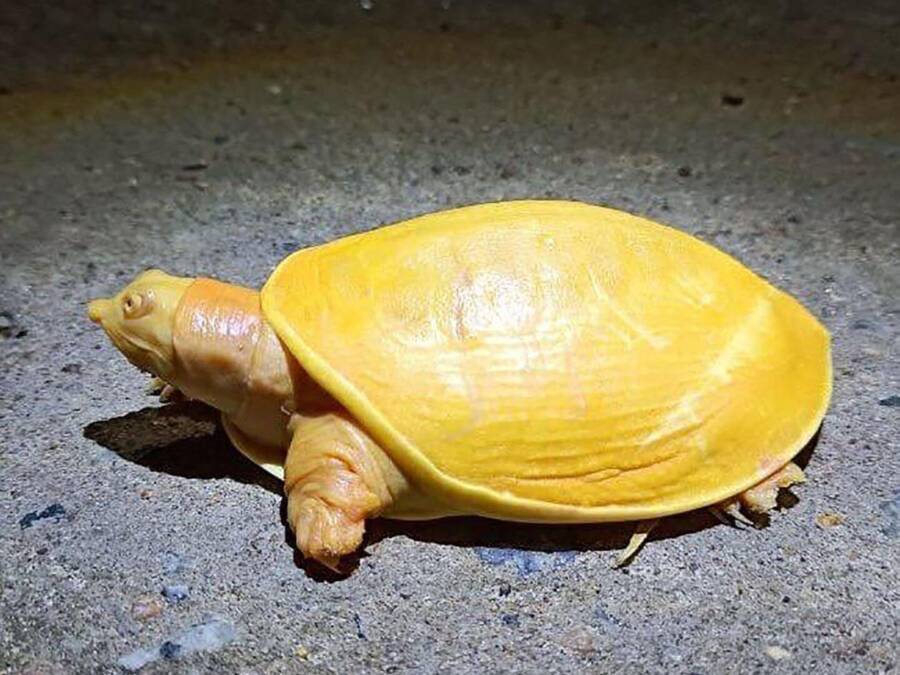 TwitterThe yellow flapshell, formally known as Lissemys punctata, has since been released back into the wild.

As such, this little reptile is an example of chromatic leucism, or a partial loss of pigmentation. Whatever color survived was, as evidenced by its appearance, yellow. Pure albinism would have led this turtle’s eyes to be red or pink, as pictured in the eastern box turtle below. According to the National Park Service, this is because the lack of pigmentation allows blood vessels to be seen through the whites of the eye, or sclera.

Indeed, this isn’t the first time such a specimen has been recorded. A yellow golden flapshell was reportedly found in the western Indian state of Gujarat in 1997, with others discovered across South Asian countries like Pakistan, Myanmar, Sri Lanka, and Bangladesh. According to a recent study published in the journal Herpetology Notes, experts claimed to have found a yellow turtle like this in Nepal.

And when the Forest Service posted their find to social media, a wildlife biologist in India claimed to have found three of these turtles in 2019. Herpetologists in India, meanwhile, explained that the condition can even result in red hues dominating a turtle’s shell. 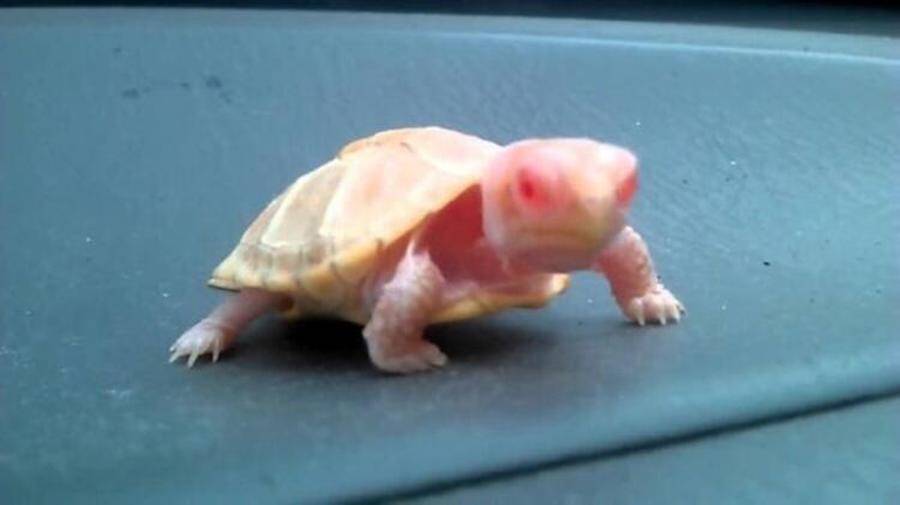 YouTubeAn eastern box turtle with albinism as evidenced by its fully pink eyes. The complete lack of pigmentation allows blood vessels to be seen through the white of the eyes.

Unfortunately, both cases are evolutionary detrimental, to say the least. “For instance, a normally colored L. punctata is much better camouflaged in the murky, greenish, aqueous environment the species frequents than a gold-colored individual,” explained the study regarding the Nepal discovery.

As such, many of these golden creatures are rescued from their natural habitats and transported to safer conditions in captivity. This particular species is also found in most natural bodies of water, which are increasingly fished, often putting them in danger of being accidentally caught and killed. 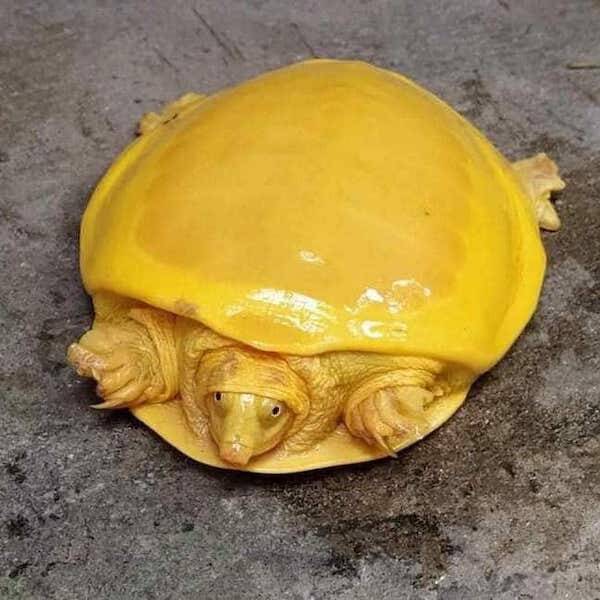 TwitterThe flapshell turtle would lack pigment entirely were it not for its yellow pteridine pigments.

This also isn’t the first time an albino turtle made the news. In 2016, a white baby sea turtle was spotted in Queensland, Australia. It was the only such specimen in its group of hatchlings. Albino creatures tend to be rare and occur in of every 10,000 mammal births. Their rarity often makes them a commodity, as was the case with an albino giraffe that was slaughtered for its unique pelt earlier this year.

Some creatures have even wilder coloring than a single red or yellow hue. According to the Iowa Department of Natural Resources, there have been cases of frogs being born entirely blue. This occurs when the genes responsible for green or brown pigmentation abnormally mutate before birth. This mutation essentially causes different wavelengths of light to be filtered out of the creature’s skin, thus producing a combination of both green and brown pigmentations, which appears blue.

As for this rare yellow turtle, experts estimate that it is aged between one and a half and two years old. It has since been released back into the wild.

After learning about the rare albino turtle found in India that looks like it’s covered in American cheese, take a look inside the terrifying mouth of a sea turtle. Then, learn about the middle school teacher who fed a live puppy to a snapping turtle in front of his students.