Meet The Indian Giant Squirrel That Looks Like A Dr. Seuss Concoction

Three feet long from tip to tail, the Indian giant squirrel or Malabar squirrel is known for its vivid coat that's driven the internet nuts. 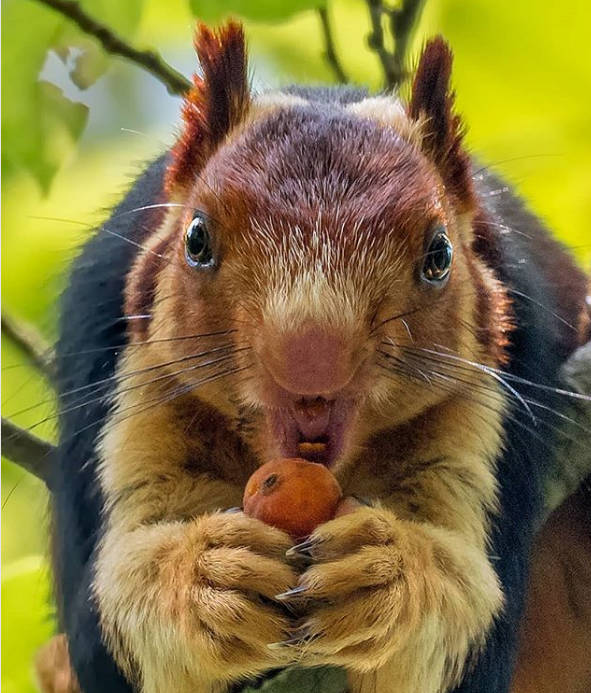 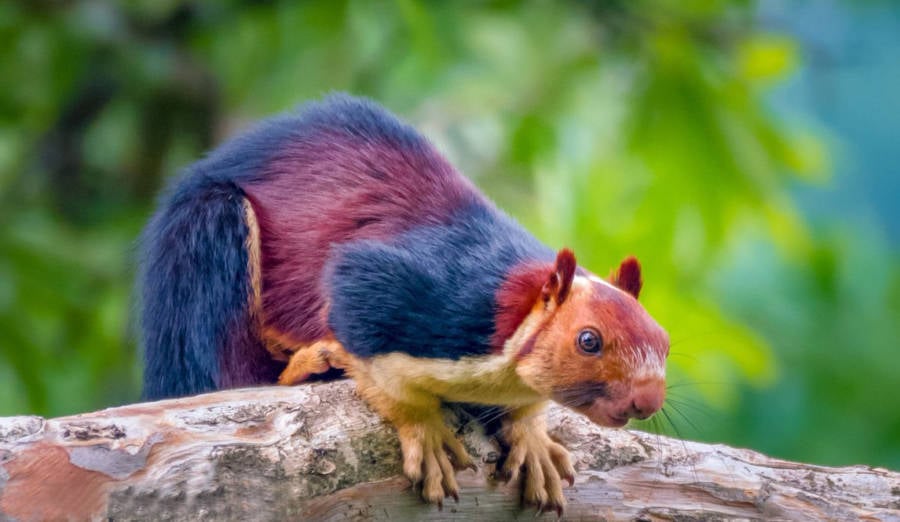 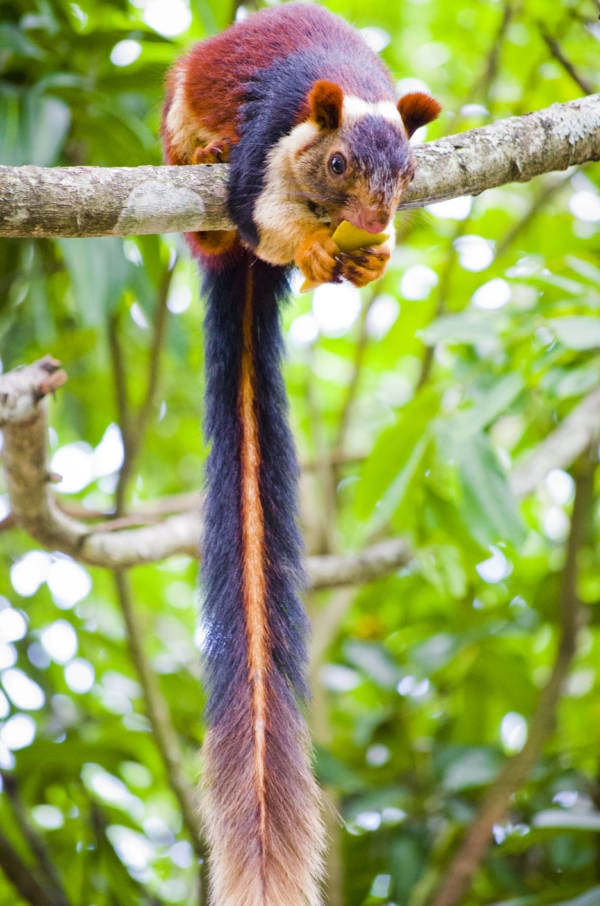 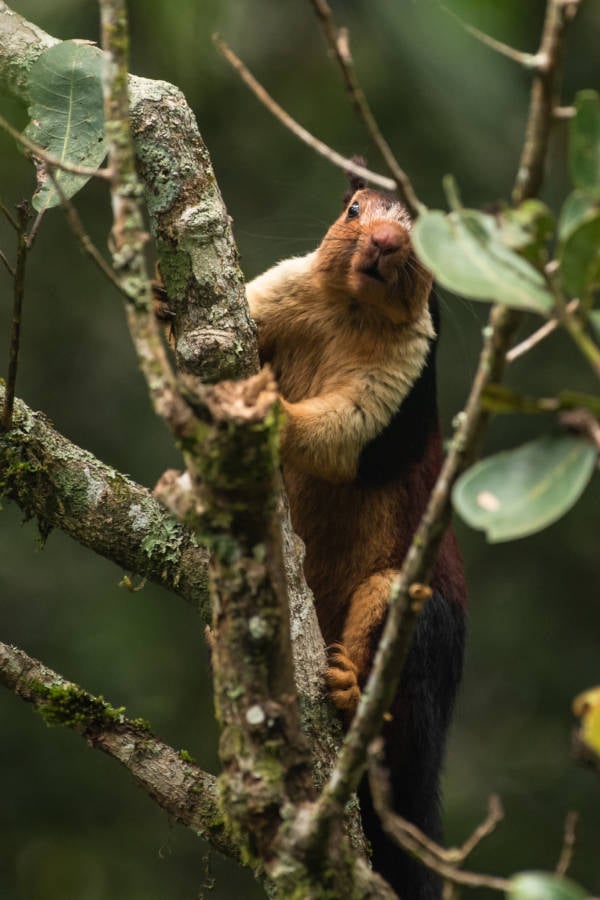 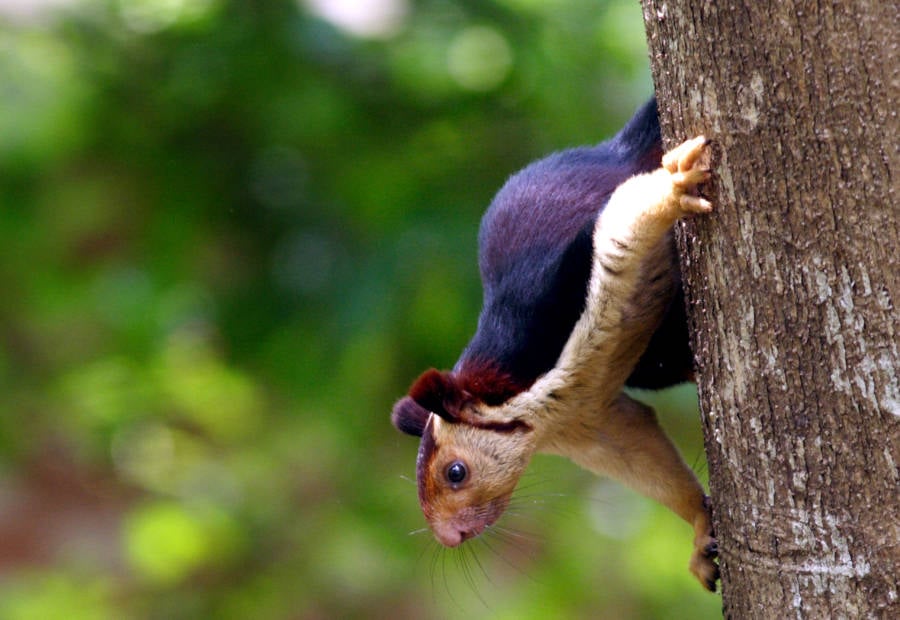 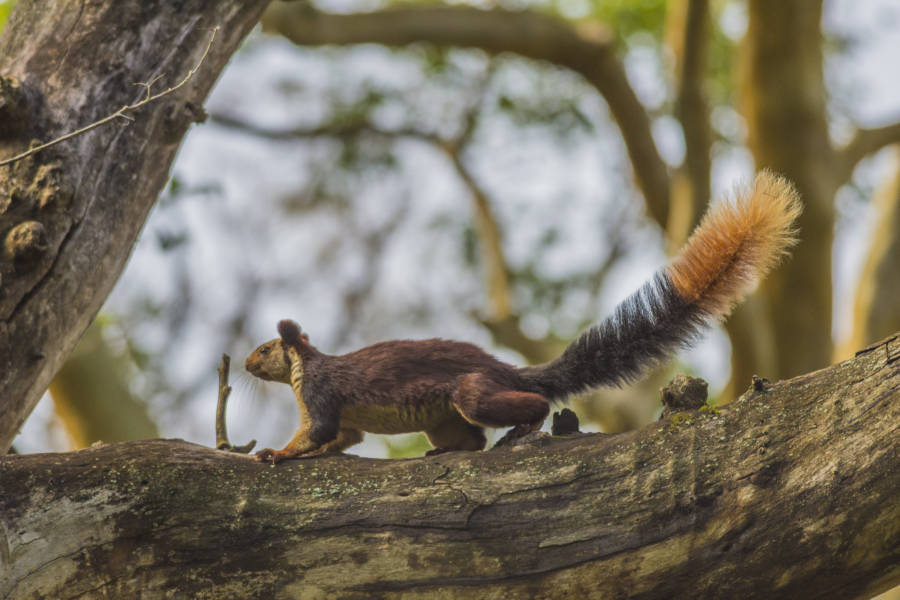 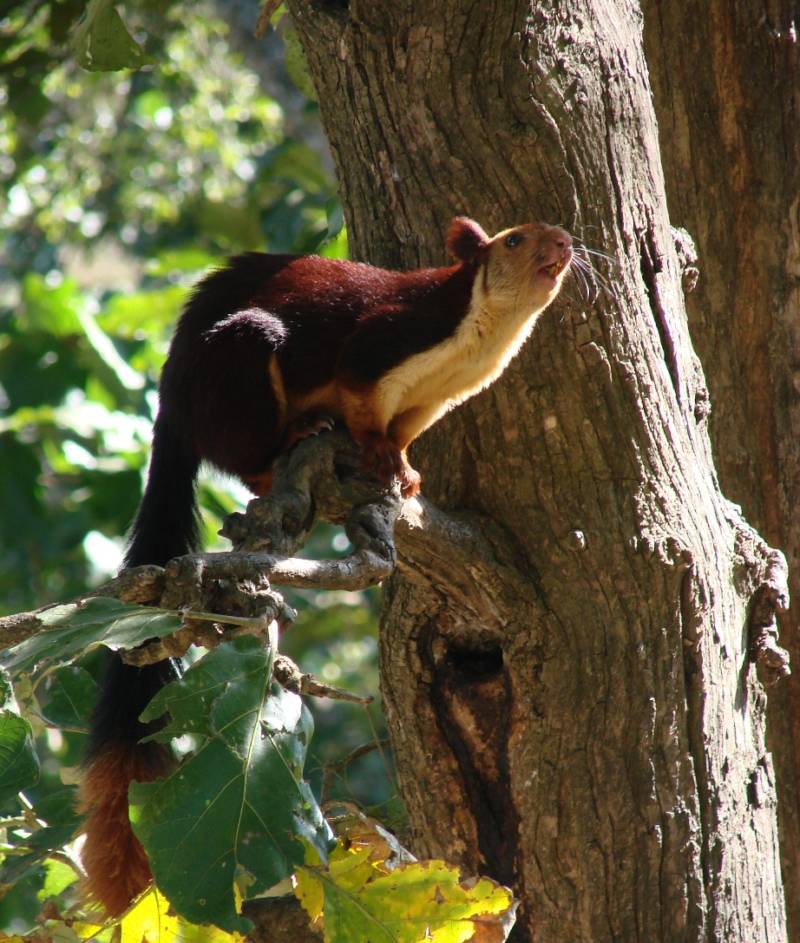 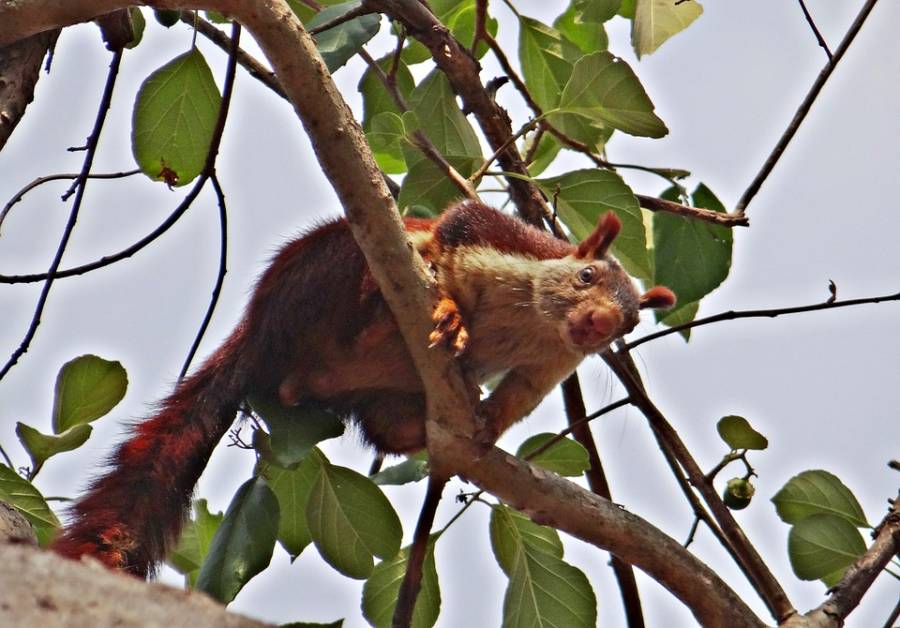 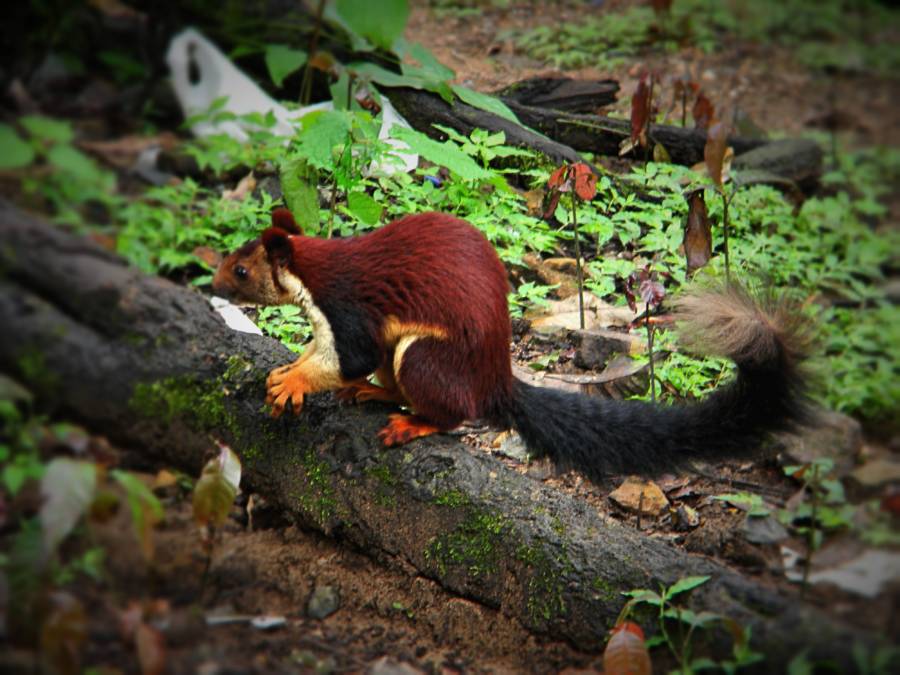 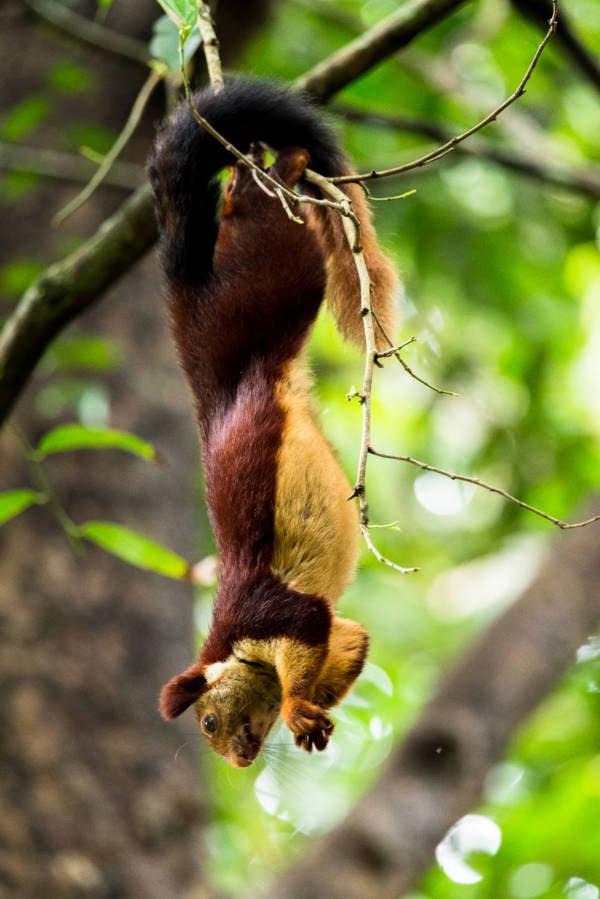 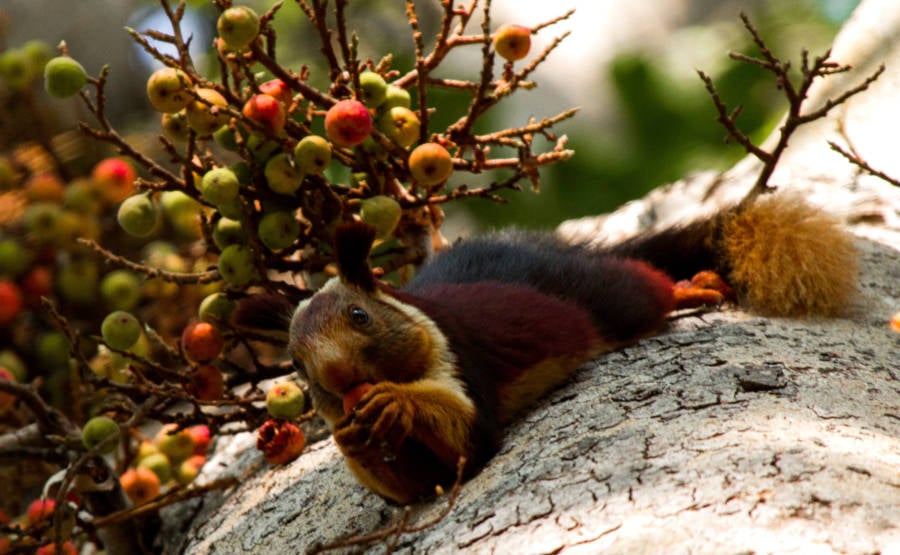 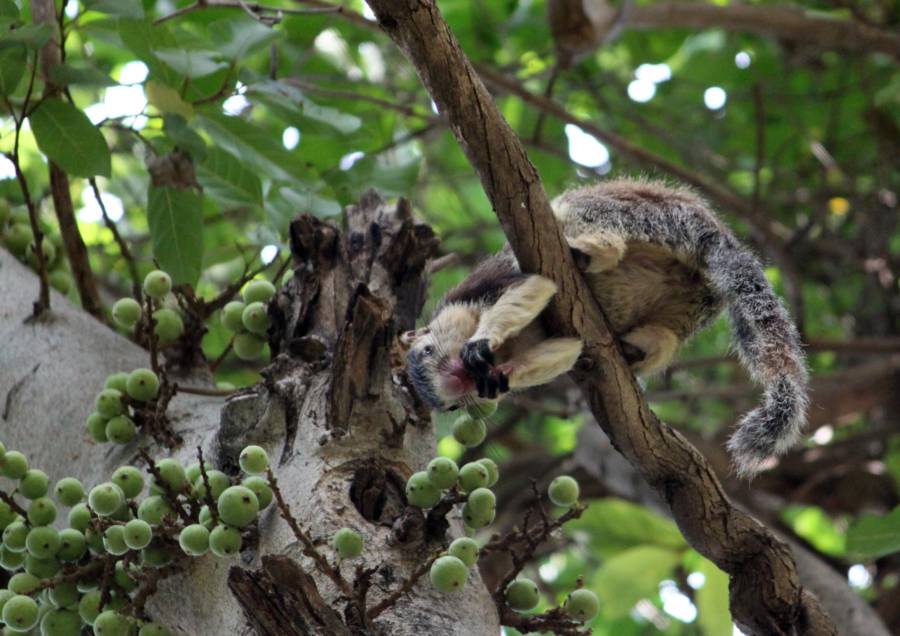 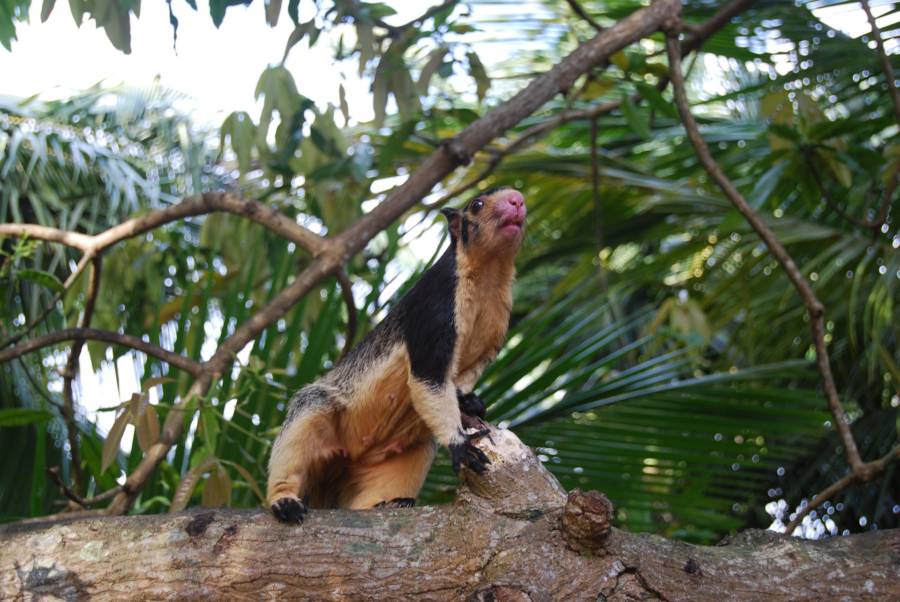 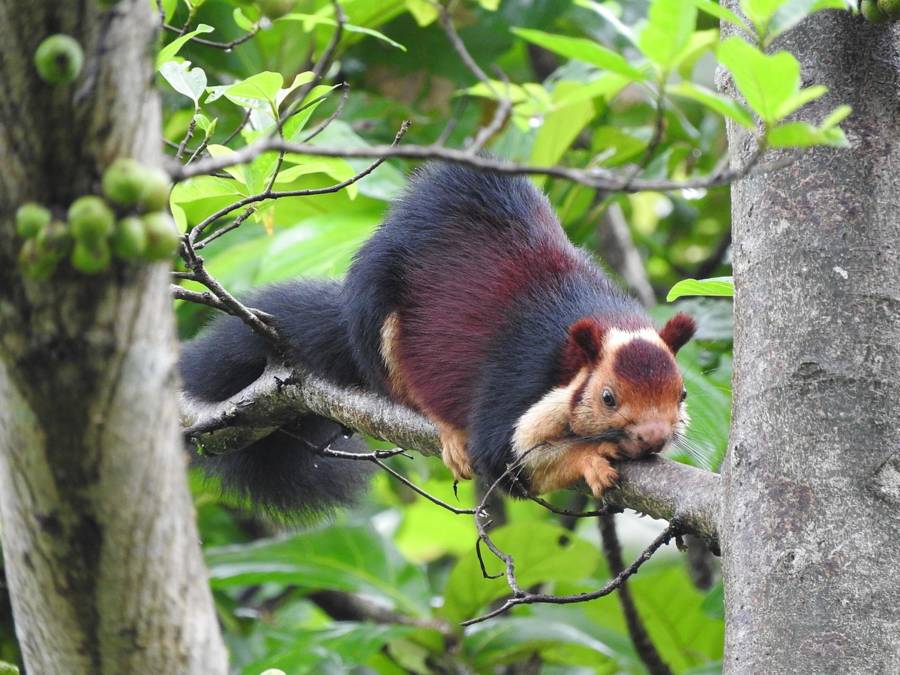 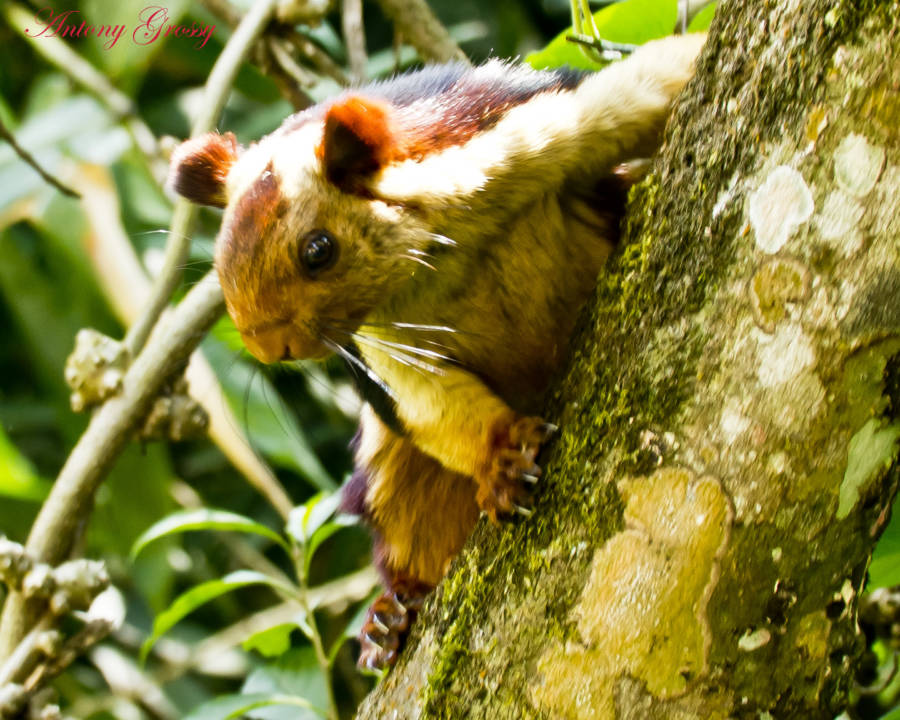 When amateur photographer Kaushik Vijayan captured stunning photos of the exotic Indian giant squirrel, the internet literally went nuts. Native to India's Pathanamthitta District, the squirrels' fur coats contain oranges and shades of magenta-purple and in the right light, look as though the entire color spectrum is contained in their backs.

Some people went as far as to say they didn't think this particular species actually existed because of the rarity of their colors. Otherwise known as the Malabar giant squirrel, Ratufa indica, are very much real — and quite adorable.

Vijayan snapped photos of an Indian giant squirrel in its natural habitat in trees and posted them to Instagram. His followers took notice. "I felt so amazed by how drop-dead gorgeous it looked," Vijayan told CBS News. "It was indeed a jaw-dropping sight to behold."

Here's the thing: no one really knows why these giant squirrels evolved to be as bright as they are. One would imagine the vivid fur causes predators to more easily notice the creatures instead of camouflaging them.

However, wildlife conservation biologist John Koprowski posited that the purple patterns probably do act as camouflage of sorts. The broadleaf forests these squirrels inhabit create a "mosaic of sun flecks and dark, shaded areas" — similar to the squirrels' markings.

Watch the colorful giant squirrel in its natural habitat.

The Indian giant squirrel has colorations ranging from deep red to purple, cream to beige, and from brighter orange to deep brown. Some are definitely flashier than others. They have short, round ears and strong claws used for gripping bark and branches of the trees in which they reside.

The body length of these colorful creatures can measure nearly 36 inches from head to tail; that's double the size of common grey squirrels. They can also weigh up to almost four and a half pounds.

But just because the giant squirrel is larger than the average squirrel does not make it any less limber. In fact, they can leap up to 20 feet to travel effortlessly between close trees. Both their flexibility and their cautious nature help them to escape predators.

Aside from being purple, Indian giant squirrels differ from all other squirrels in one particular way: they create caches of food in the treetops instead of storing it underground.

Their diet includes fruit — especially the jackfruit, also native to India — flowers, nuts, and tree bark. Some subspecies are omnivorous and snack on insects and even bird eggs.

The squirrels use their hands to eat while standing on their hind legs. They also use their large tails as a counter-weight to improve their balance while perched on precarious branches.

Habitat Of The "Rainbow Squirrel"

Home to these creatures is mainly the tropical climate evergreen forests of India. The Malabar giant squirrel is an upper-canopy dwelling species which means that it rarely leaves its treetop home.

These giant squirrels make their nests on nooks of thinner branches or in tree holes. These nests are similar in size to eagles' nests and constructed of small twigs and leaves. Sometimes an individual squirrel, or a pair of squirrels, will have more than one nest in an area of forest.

Instead of descending when they sense danger, these squirrels flatten themselves against a branch to appear to be part of the tree. Common predators include leopards and other big cats as well as snakes and large birds of prey.

These squirrels are active in the early morning and in the evening and rest in the late morning and afternoon. They are fairly solitary creatures, avoiding other animals including their own kind. Indeed, they will not usually engage with other squirrels unless they are breeding. It has been confirmed that males actively compete for females during the breeding season and that pairs remain associated for a period of time during the breeding season.

Not much else is known about their mating and reproduction habits except that a litter can be comprised of one to three squirrels and that breeding can take place any time during the year. While one giant squirrel lived to be 20 years old in captivity, longevity in the wild is fairly unknown.

As with many forest animals, deforestation is threatening the Indian giant squirrel. They are decreasing in number as they are relegated to a smaller geographic area. Sadly, the same thing is happening to Indian elephants and the result is nothing short of tragic.

As of January of 2016, the IUCN Redlist of threatened species did a global assessment and found that even though the squirrel's numbers are decreasing, they remain of "least concern" on the organization's scale. This means that the squirrels are not in imminent danger of extinction.

Hopefully, forest conservation efforts will continue to enhance and ensure the protection of these beautiful Indian squirrels.

After this look at the Indian squirrel, find out what pop culture has to do with animal extinction. Then, read about the phrases PETA wants you to quit saying.