"It's really bad. You can't go about two steps without stepping on something," one resident said. 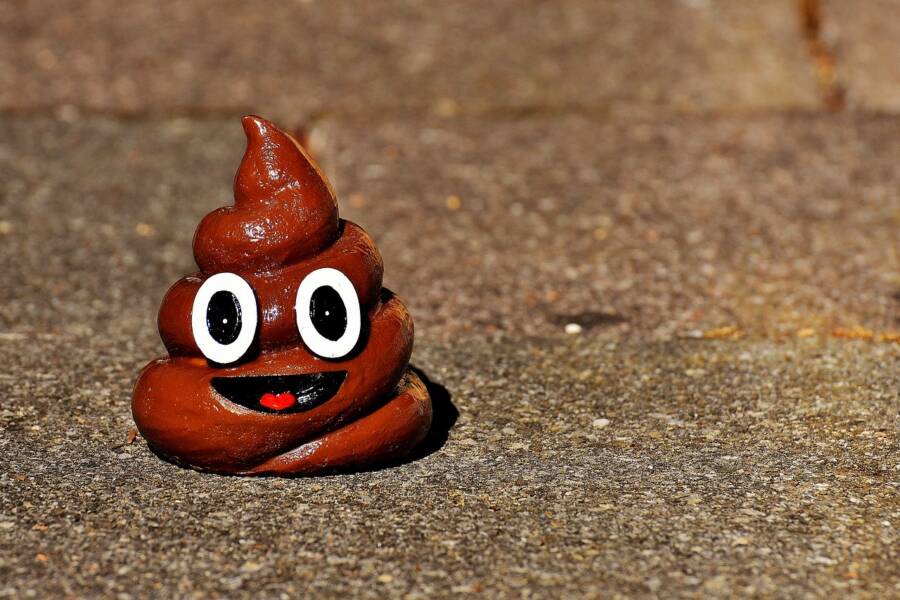 PixabayThe city’s Tenderloin district, which has the highest number of poop reports through 311, is now getting weekly wash downs.

San Francisco’s ongoing battle with public poop is no secret. But the problem has gotten so bad that the city’s neighborhoods are taking matters into their own hands.

As reported by San Francisco’s KRON4, the city’s Tenderloin district — which currently power-washes its streets and sidewalks once a month — is quadrupling the frequency of its cleanings.

The program will be carried out under neighborhood nonprofit the Tenderloin Community Benefit District (TCBD) to rid the area of the growing number of feces found on its sidewalks. The Tenderloin has the highest number of phoned-in complaints for sidewalk cleanliness, including “code brown” calls — a nickname for public poop reports.

“It’s really bad. You can’t go about two steps without stepping on something,” one neighborhood resident said. The sentiment was echoed by community organizer David Elliot Lewis.

“Even though seeing human and animal feces on our sidewalks is a common occurrence, I find it upsetting and disturbing every single time,” Lewis said. The poop-infested streets of the Tenderloin’s 30 square blocks is already getting hosed down by the TCBD once a month, in addition to the morning wash downs from the Department of Public Works (DPW).

“We steam clean and hose down with fire hoses the actual sidewalks of the Tenderloin every single day in the mornings,” said Peter Lau of the (DPW). Alas, the efforts were not enough to combat the amount of feces, both from humans and dogs, found around the neighborhood. 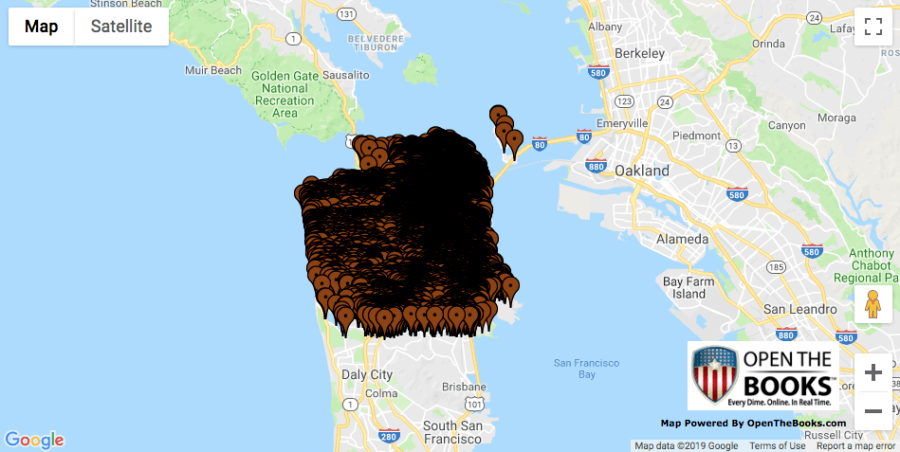 Open The BooksA map showing locations of San Francisco’s public defecation reports, with a brown dot for each incident.

Residents and officials hope that the increase in sidewalk power washes will help keep the Tenderloin’s streets feces-free for longer. The news was announced earlier this week by district supervisor Matt Haney, who secured an additional $260,000 in funding for cleaning in his district.

“Tenderloin residents and businesses deserve clean and healthy sidewalks just like any other neighborhood,” Haney said in a statement. “I am so excited and grateful that the TCBD continues to step up their pressure washing service to ensure that our streets and sidewalks are clean and healthy for everyone to enjoy.”

The TCBD’s cleaning crew will also carry smaller portable power washers in their carts to make spot-cleaning more efficient. The portable washers run off five-gallon water tanks and can be used with soap, which will hopefully help disinfect the brown spots on the street.

The Tenderloin district has garnered a reputation as one of the seediest areas of San Francisco and, unlike other neighborhoods in the tech city, has largely remained untouched by gentrification. As an area where the city’s most vulnerable populations often congregate, it’s perhaps no wonder San Francisco’s poop infestation has gotten particularly bad around these parts.

Human feces often covers the neighborhood’s pavement, while in 2018 a plastic bag filled with 20 pounds of “human waste” was dropped on a Tenderloin sidewalk. 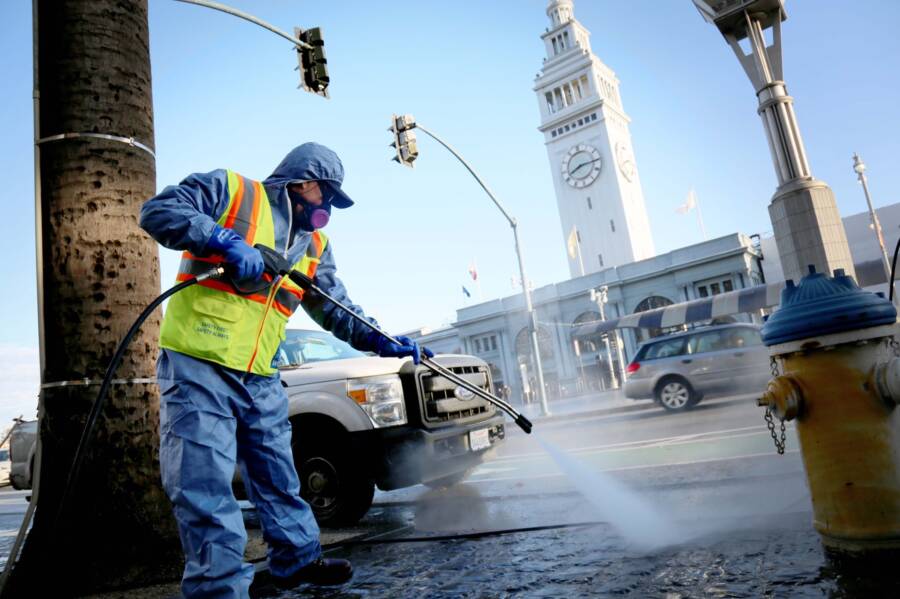 But public poop isn’t just a problem in the Tenderloin. San Francisco’s astronomical rents — by far the highest in the country — has made the city virtually unlivable, especially for those who are already struggling to make ends meet.

The sky-high income of the tech industry has pushed the average rent of a one bedroom apartment to $3,600 — $1,000 more than what a minimum-wage worker makes in a month before taxes. The Tenderloin’s feces-strewn streets are mere blocks away from new high-rise luxury apartment buildings and the offices of some of the most highly valued companies in the world.

The large amounts of poop found on the city’s streets was, and still is, a major public health concern, so in 2018, San Francisco’s Public Works Department finally launched a “poop patrol” task force specifically formed to clean up the public displays of feces covering its smelly streets.

Earlier this year, the amount of code brown 311 calls had increased so much — quintupling since 2011, in fact — that local watchdog group Open The Books made an interactive poop map of every reported case of feces in the city.

By the city’s own count, there are 10,000 homeless people living in San Francisco, most of whom are unsheltered. With more and more people living on the streets every year, access to basic facilities like bathrooms has become paramount.

The increase in street cleaning in the Tenderloin is only one part of the district supervisor’s 10-Point Plan for Clean and Healthy Streets, which he announced earlier this year. In addition to more street poop power washes, Haney’s plan includes making public restrooms accessible 24 hours a day, a program that has already been implemented in three bathrooms in the city.

“We all know that we need more foot patrols out here,” Haney said. “We need more homeless outreach out here. We need more bathrooms open, we need more trash cans. We want a clean, safe and healthy community for everyone who lives here and works here. This is a huge, huge step forward.”

Now that you’ve caught up on the upgraded washing methods of one of San Francisco’s most poop-infested neighborhoods, learn how one artist turned cans of poop into $300,000 pieces of art. Next, find out more about the pink poop of penguins, which are so plentiful that it can be seen from space.