The Sand Creek Massacre: When U.S. Forces Slaughtered As Many As 200 Unsuspecting Native Americans

The Sand Creek Massacre of 1864 saw John Chivington and his 675 men slaughter hundreds of Cheyenne and Arapaho in present-day Colorado.

The unfortunate history of abuse that indigenous populations suffered at the hands of the United States government is one that is long and well-documented. Most modern Americans are familiar with the bloody legacies of the Trail of Tears and Wounded Knee, but the Sand Creek Massacre, one of the most vicious in the country’s history, has been nearly forgotten.

On November 29, 1864, Colonel John Chivington and his men killed as many as 600 Cheyenne and Arapaho people, making the Sand Creek Massacre one of the most brutal assaults on Native Americans in U.S. history. 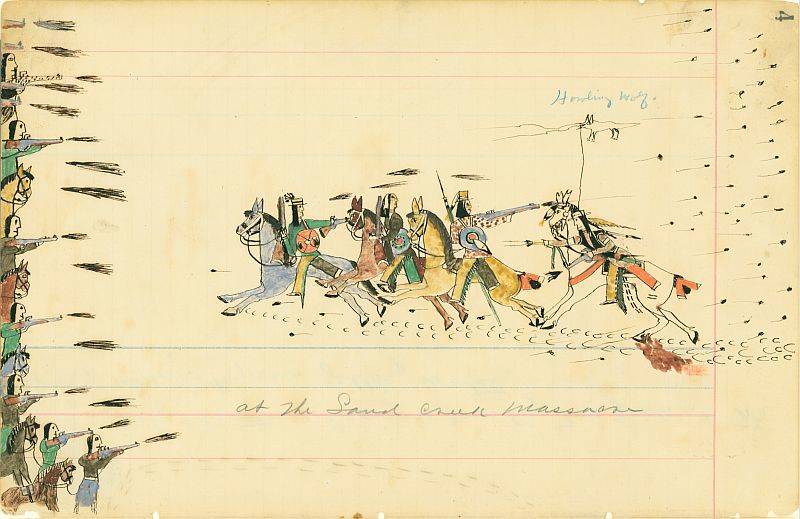 The Plains Indians Vs. The Settlers

The story behind the massacre begins in much the same way as the countless other misfortunes that befell Native Americans: with broken treaties and battles over territory.

Chief Black Kettle of the Cheyenne was a notable peacekeeper who did his utmost to try and prevent violence between his people and the settlers encroaching on their ancestral lands. The Cheyenne and Arapahoe tribes who populated Eastern Colorado faced a massive influx of white settlers after the discovery of gold in California in 1848. Although the United States initially tried to guarantee the land rights of the tribes with an 1851 treaty, the tide of fortune-seekers was too great to stem. 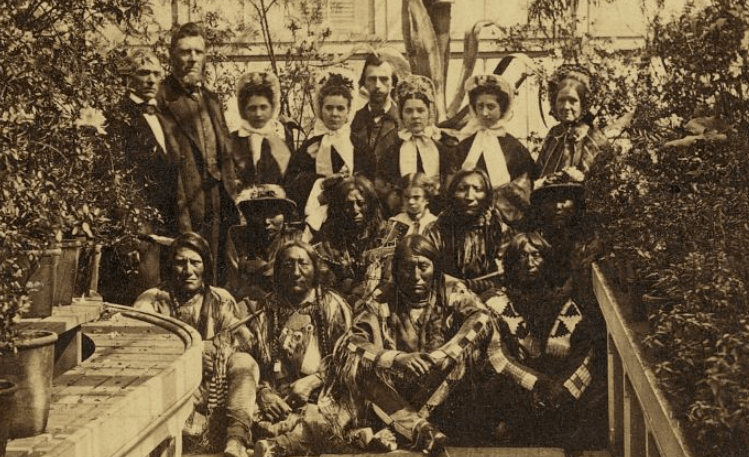 Library of CongressRepresentatives from several Plains Tribes at the White House in 1863. Two of the men in the front row, War Bonnet and Standing in the Water, would be killed in the Sand Creek massacre.

The constant flow of settlers began to destroy the arid landscape. Black Kettle made a further attempt at peace in 1861 when he signed Treaty of Fort Wise, which greatly reduced the lands granted to the natives. Indeed, Black Kettle had ceded most of his ancestral lands save for a 600-square-mile reservation.

But the land proved insufficient for the Native Americans, and as settlers continued to destroy their surroundings, the Natives grew restless. Tensions and small skirmishes broke out between tribes and nearby settlers.

Black Kettle continued to try to negotiate peace deals with settlers. He uprooted and moved his people to accommodate Anglo-Europeans. But his efforts were not enough for either his people or the land-grabby settlers.

The American governor of the Colorado territory, John Evans, then authorized his citizens of the area to “kill and destroy…all hostile Indians,” in August of 1864.

In 1864, the United States was in the midst of civil war between the Union and Confederacy, but the bloodshed was not limited to Northern and Southern states. Union Colonel John Chivington had been sent out West to prevent Confederate troops from overrunning trade routes and gold mines in the Colorado territory. He was more than willing to carry out Evans’s cruel order.

On the morning of the Sand Creek Massacre, on Nov. 29, 1864, the colonel and his men rode down on what he described as a “Cheyenne village…from 900 to 1,000 warriors strong.” He then described how “The first shot is fired by them. The first man who falls is white…None of the Indians show signs of peace, but flying to rifle pits already prepared they fight.”

The Colonel noted that the bloody day ended with “almost an annihilation of the entire tribe” and he and his men were praised for their prowess in subduing a hostile enemy.

In fact, if not for Captain Silas Soule, the Sand Creek massacre may have gone down in history as yet another skirmish between the American military and Native tribes and the truth never to be known.

In truth, still hoping to preserve some remnants of friendly relations, Chief Black Kettle had been advised to bring his people to Sand Creek, about 200 miles outside of Denver, under the promise they would be designated “friendly Indians” and placed under the protection of the nearby fort. While most of their men were out hunting, Chivington and his men descended and the slaughter began.

Captain Soule was so horrified by what he witnessed that November day that he sent a dispatch to Major Edward Wynkoop, the commander at Fort Lyon, in which he revealed Chivington’s glorious charge for what it really was: an unprovoked slaughter of nearly 200 men, women, and children. 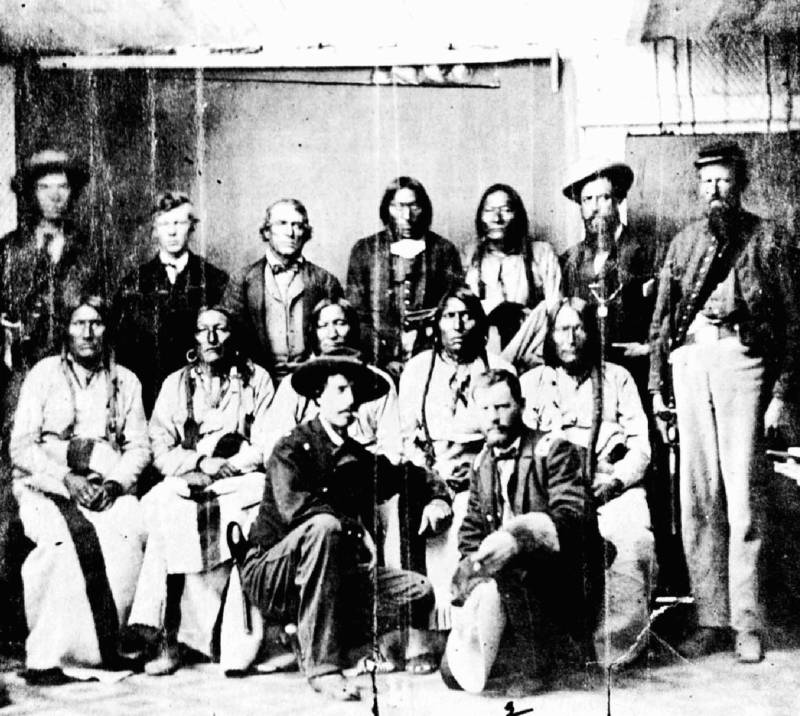 Wikimedia CommonsBlack Kettle, Wynkoop, Soule, and several other tribe members and soldiers in the outskirts of Denver shortly before the massacre.

Soule wrote: “I tell you Ned it was hard to see little children on their knees have their brains beat out by men professing to be civilized.” He described the horrific scenes during which the Cheyenne were cut down and then mutilated, with their “ears and privates…cut out for trophies.”

At the end of the day, an estimated 148 Indians who had been promised protection were dead, while Chivington had lost only 9 men.

Inside The Horrors Perpetrated At Sand Creek

Wynkoop forwarded Soule’s chilling account to Washington. In 1865 a congressional committee launched an investigation into the Sand Creek Massacre. Chivington continued to insist he had engaged in legitimate battle with a hostile enemy rather than have slaughtered innocents.

But the testimonies of Soule and other eyewitnesses, all of which corroborated each other and described the true, gruesome, nature of the events of the Sand Creek Massacre led the committee to rule that the colonel “deliberately planned and executed a foul and dastardly massacre” which resulted in the murder “in cold blood” of Black Kettle who “had every reason to believe that they were under [U.S.] protection.” 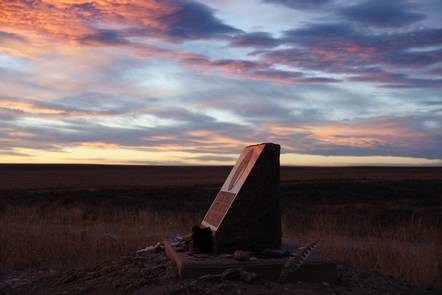 National Park ServiceToday Sand Creek in Colorado is a National Park dedicated to memorializing the massacre.

The public’s initial praise of Chivington’s heroics quickly turned to outrage regarding his crimes. Unfortunately, the favorable ruling of the committee and promise of reparations came too late.

For many of the natives, the massacre had only affirmed their suspicion that Americans could never be trusted, and hostilities between the United States and Plains Indians would continue until another massacre at Wounded Knee in 1890.

After this look at the Sand Creek Massacre, read about the massacre of Shoshone at Bear Creek. Then, learn more about the Native American genocide suffered at the hands of the settlers.