Over time, humankind has managed to make its illusions of grandeur actually seem real. These satellite images will fill you with a helpful dose of humility.

Removing ourselves from our surroundings often brings us closer to them. Astronauts speak of the Overview Effect, passing over Earth and seeing it only as a fragile speck in a massive solar system. The desire to protect and preserve is felt, as national boundaries evaporate and a global interdependency is realized.

These satellite images are fascinating, overwhelming and thought-provoking. So, sit back and take a trip around the globe: 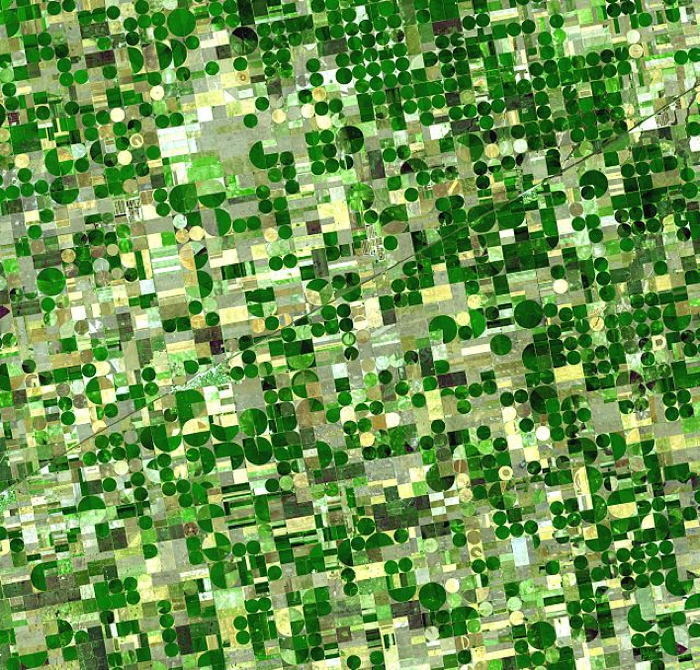 These little circles in the Kansas prairie look like beautiful modern art, but they’re actually center-pivot irrigation circles for crops. Water is pulled from Ogallala aquifer and shot through a giant sprinkler that pivots around a central point. 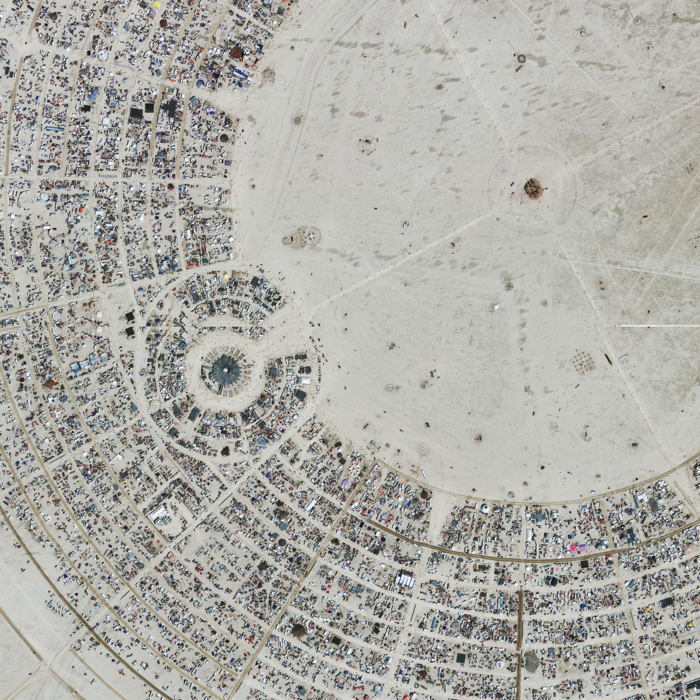 An art festival that ignites the Nevada desert for a week leading up to Labor Day, Burning Man is about self-reliance, respect and building community (even though you have to pay for your own actualization). 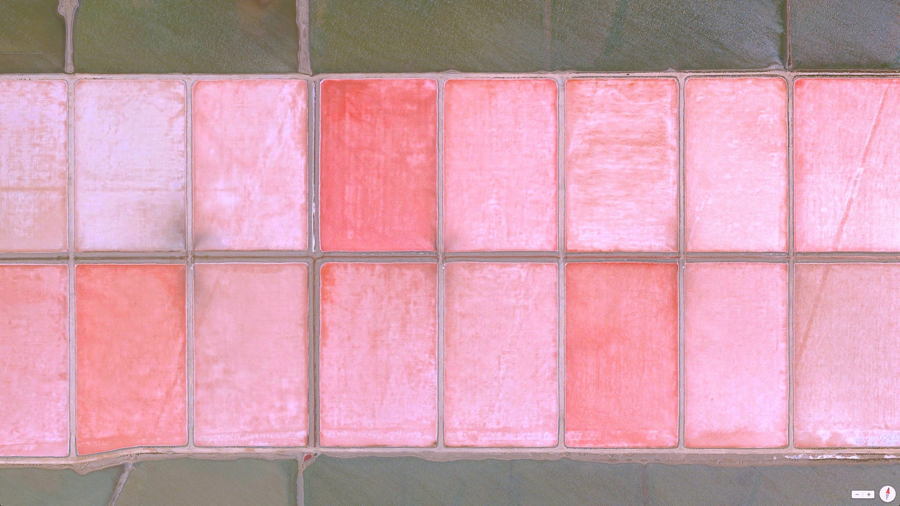 Salt evaporation ponds are manmade devices used to separate salt from seawater. The colors that result are due to the salinity of the water, but it makes for a beautiful palette. Source: Minimograph 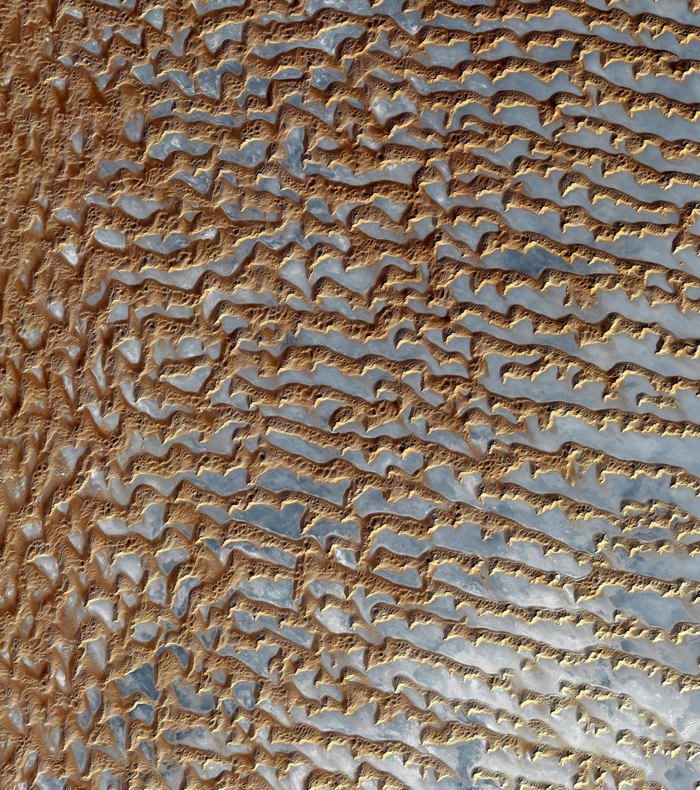 The largest sand desert in the world, Rub’ Al Khali is also known as The Empty Quarter. Its sandy hills cover parts of Saudi Arabia, Yemen, Oman and the United Arab Emirates. 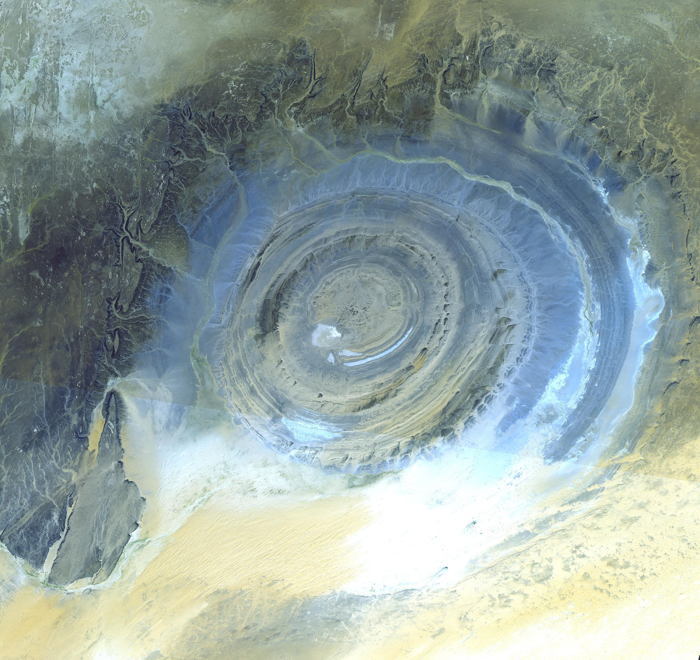 The Richat is a deeply eroded geologic dome in the Sahara Desert. Ever watching, the “eye” is made of bedrock, sand, plant life and salt sediments. 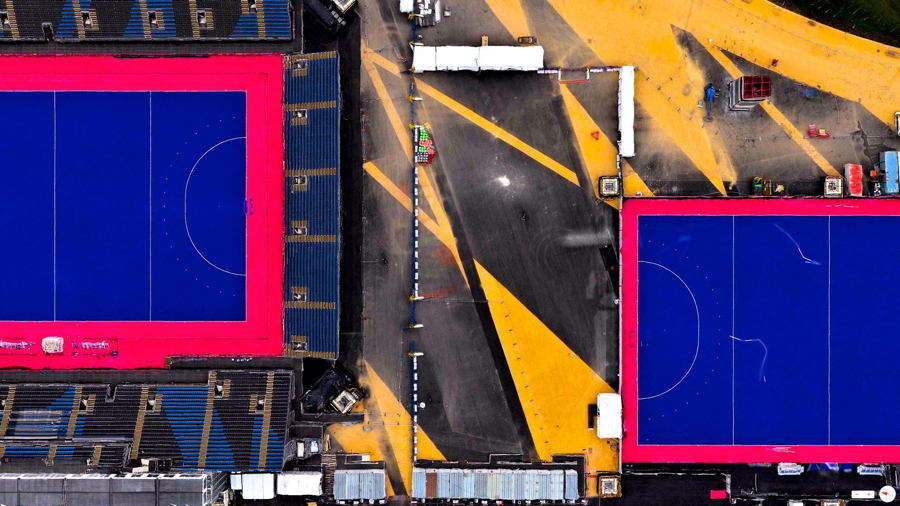 No longer in existence, the Riverbank Arena in London was constructed for field hockey games during the 2012 Summer Olympics. 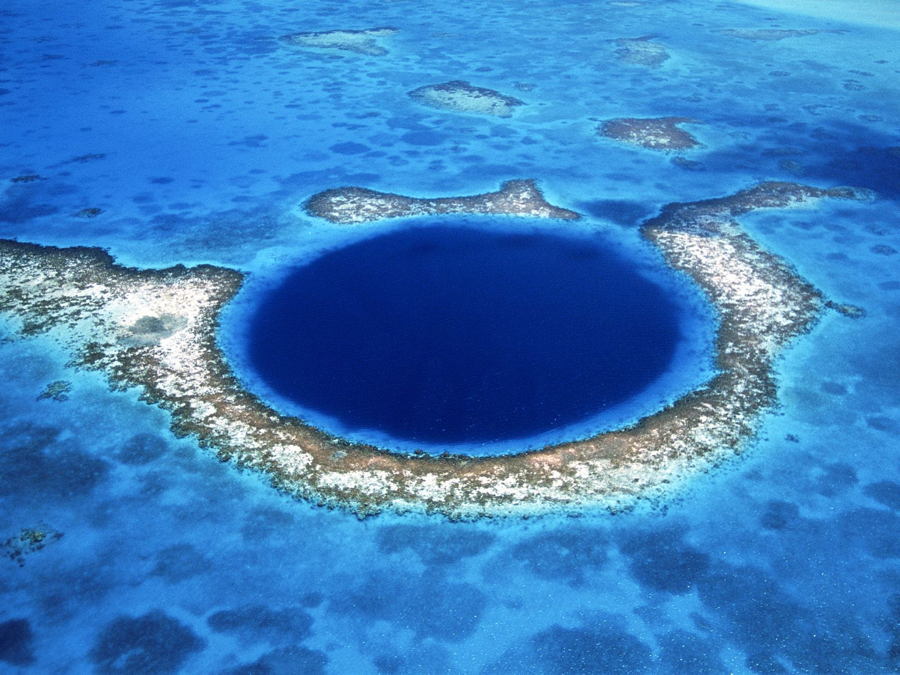 60 miles off the coast of Belize is a giant blue chasm in the ocean. The world-renowned scuba diving location includes a vast array of marine life, including giant groupers, nurse sharks and coral reef formations. Source: Visions Of Earth 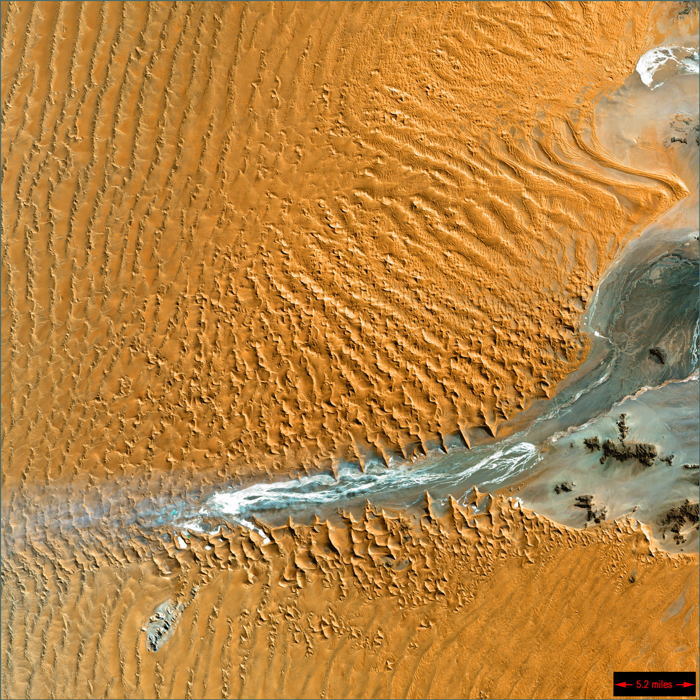 Arid for approximately 55-80 million years, the Namib Desert in Namibia and Angola might be the oldest desert on the planet. Red, vast and harsh, the desert is a lunar landscape on Earth, with small vestiges of water where it meets the coast. 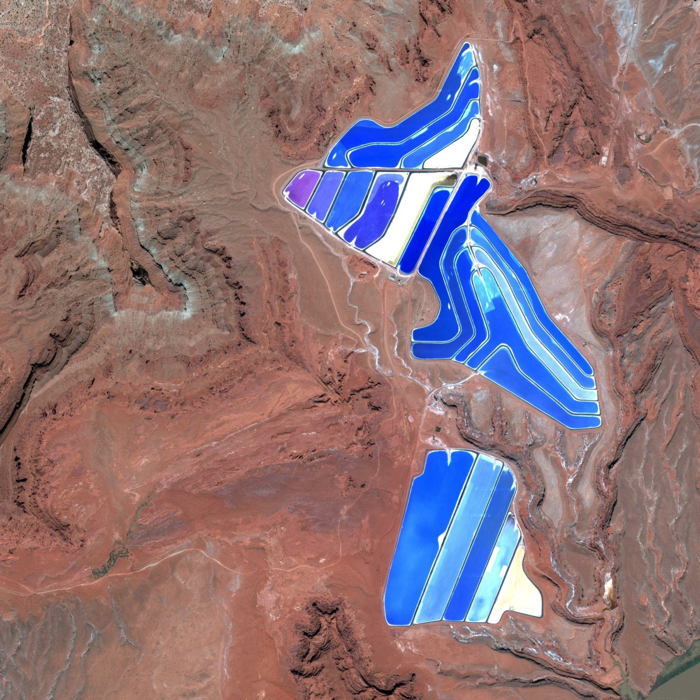 Utah’s Potash ponds are used in the separation of potassium from various mined and manufactured salts. The resulting potassium is used for fertilizer, animal feed and water softening. 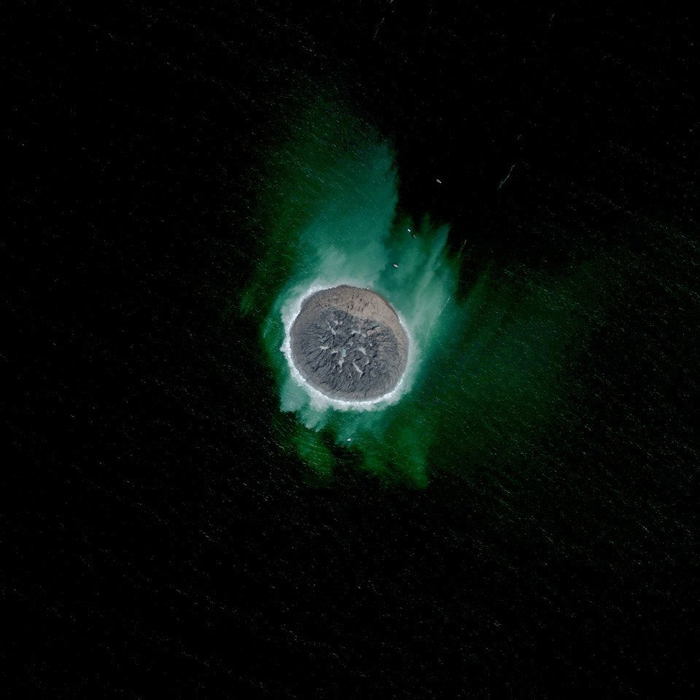 Following an earthquake in Pakistan on September 24, 2013, an island formed off of the coast of Gwadar. 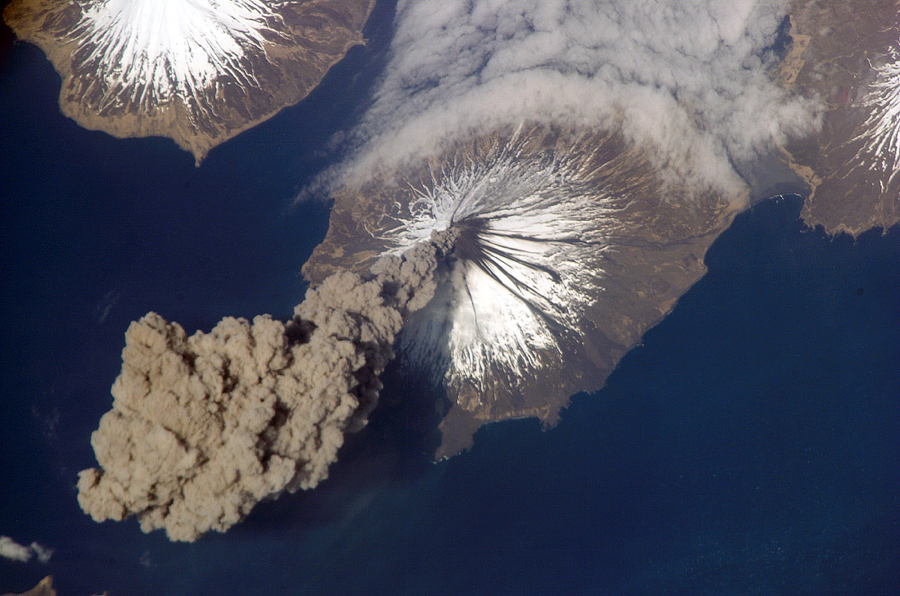 Mount Cleveland erupted in May 2006 and astronauts were the first to see the billowing smoke from the Alaskan volcano. The tallest mountain in The Islands of the Four Mountains, it frequently blows ash and smoke into the sky. 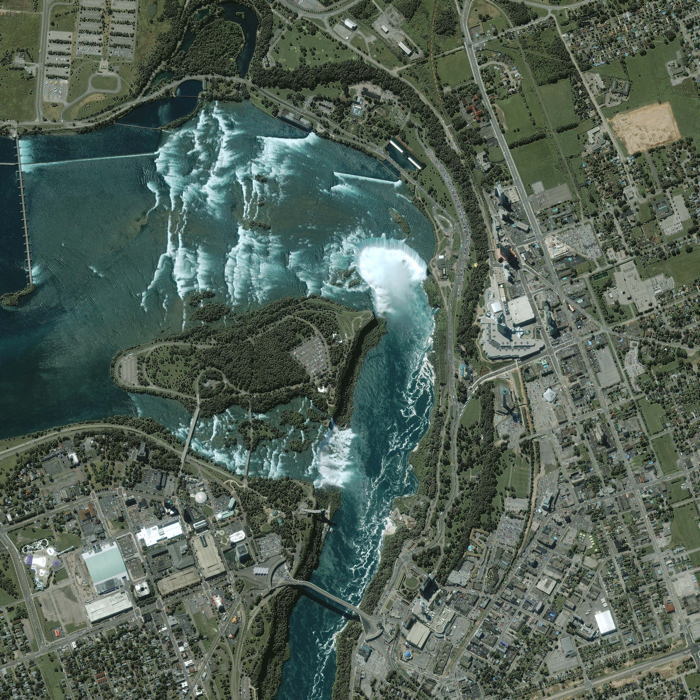 Erosive and violent, the three waterfalls that make up Niagara rip through the landscape, picking up rock dust and salt along the way making the water a rich, greenish color. Source: Niagara Falls Live 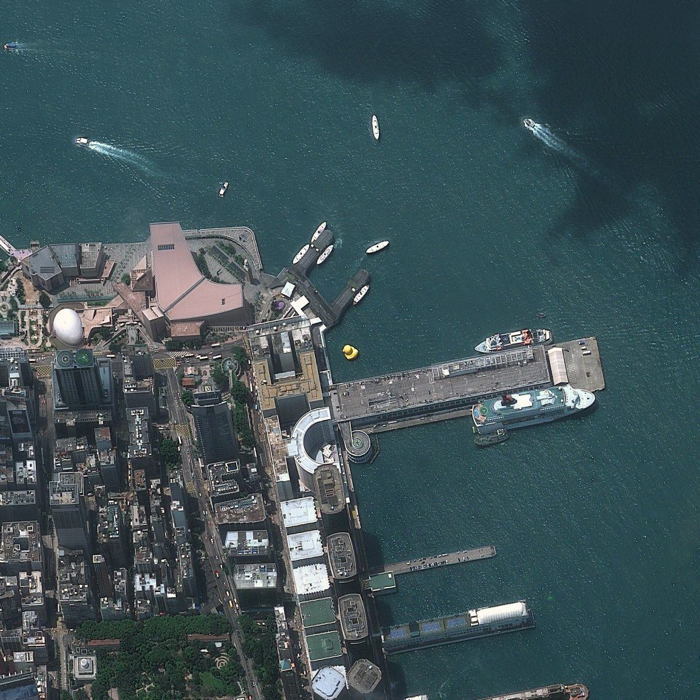 Created by Dutch artist Florentijn Hofman, this rubber duck sculpture has made its way to various ports around the world. When this photo was taken, the duck was cruising in Hong Kong. Source: Business Insider 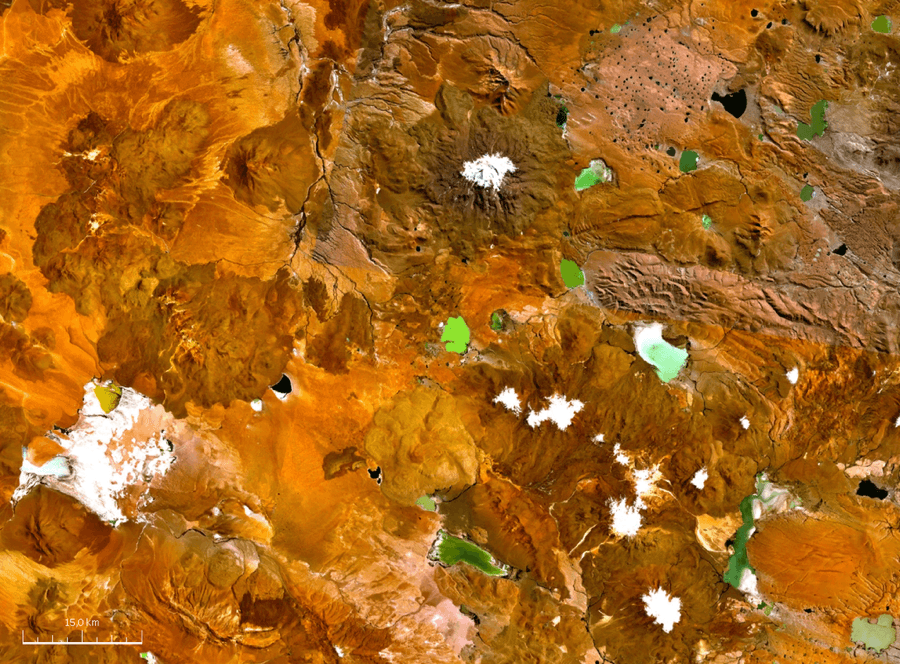 The border between Bolivia and Argentina is a pitted landscape with snow-topped mountains and verdant lakes. 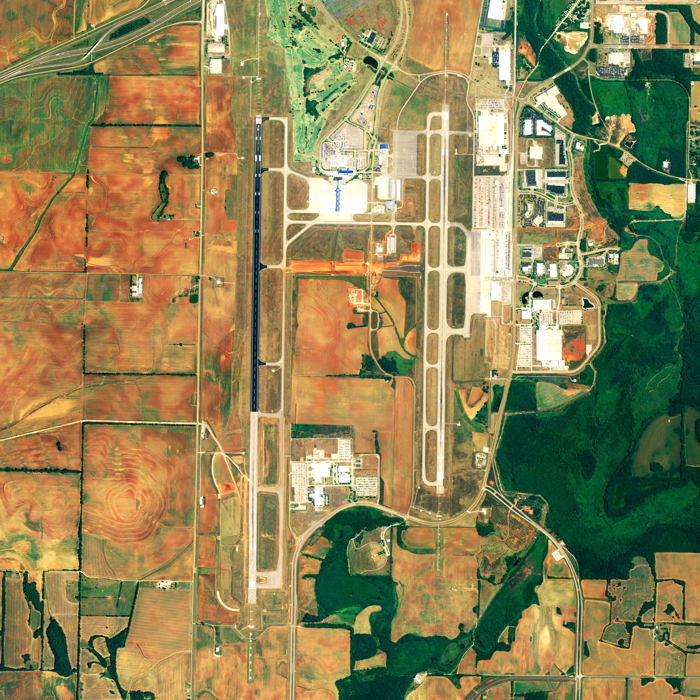 Farmland and airstrips blend together in this photo of the Huntsville, Alabama International Airport. 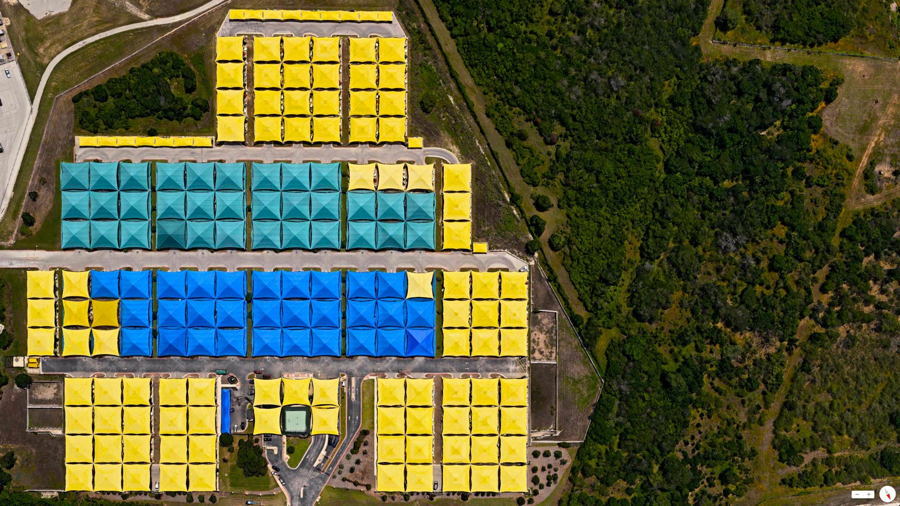 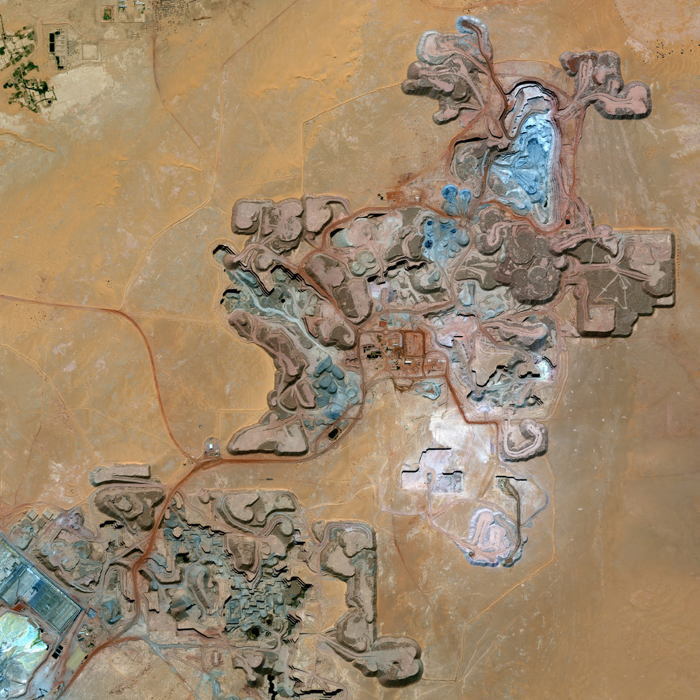 Built between the Sahara desert and the Aïr Mountains, uranium mines have meant big business for Niger, though it remains one of the poorest countries on Earth. Residents fear the effects of uranium mining, from radiation poisoning to cancer. 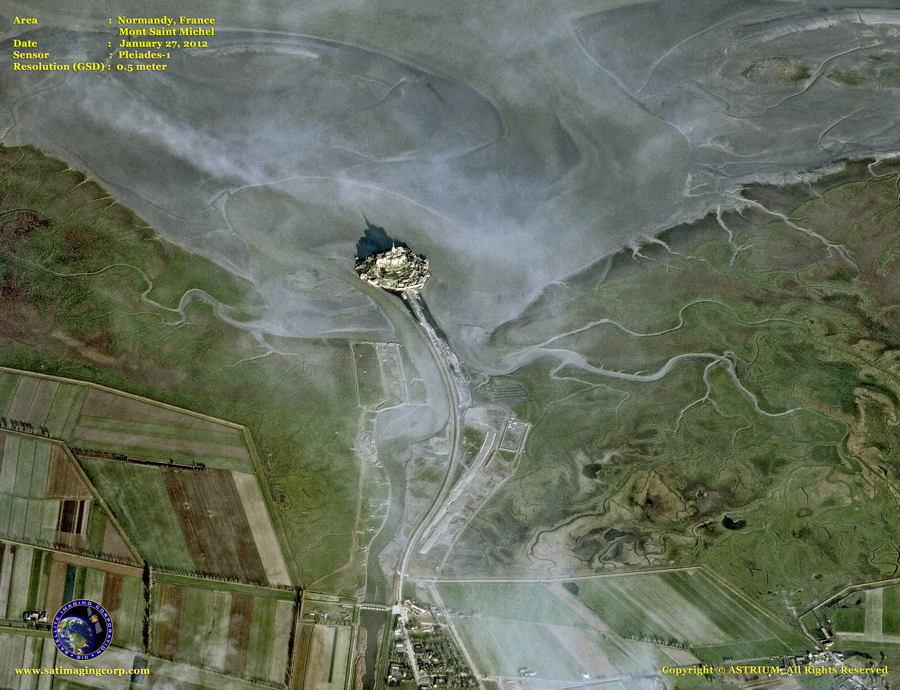 This French commune towers over a small tidal island off the coast of France. Access to the island is dependent on the tides, uniting human ingenuity with natural beauty. Source: Satellite Imaging Corporation 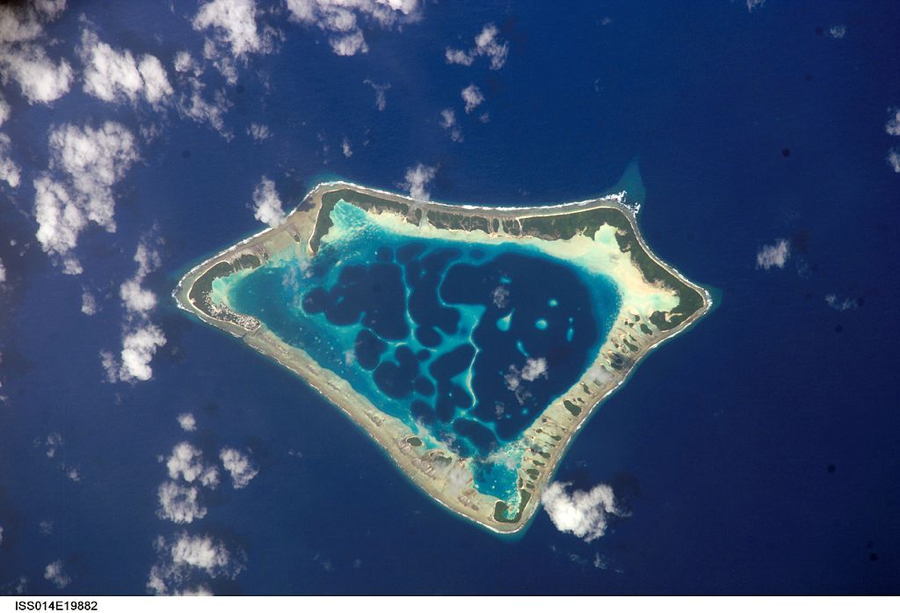 What appears to be a triangular fort in the middle of the Pacific Ocean is actually a group of 42 coral islets that are part of Tokelau, a New Zealand territory. The geometric atoll surrounds a coral reef lagoon and only has one guesthouse. 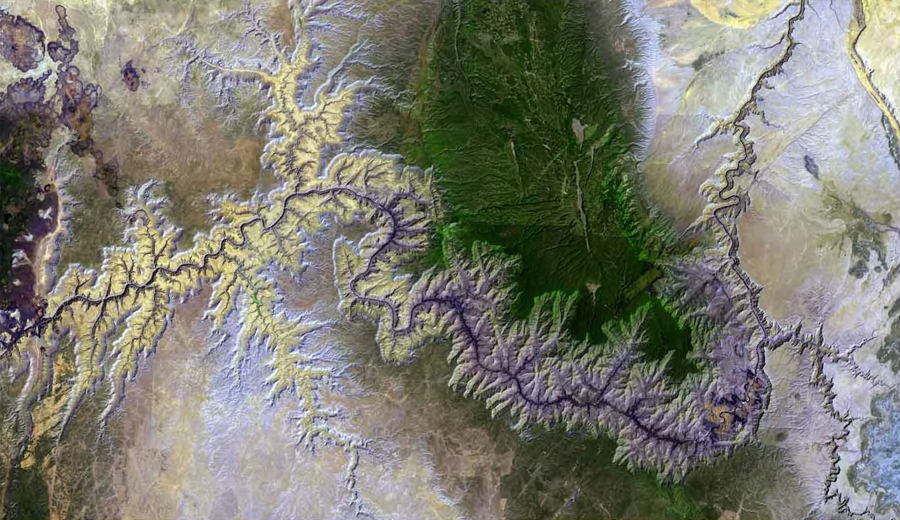 Lush greenery borders craggy rocks as the Colorado River cuts its way through the Grand Canyon. 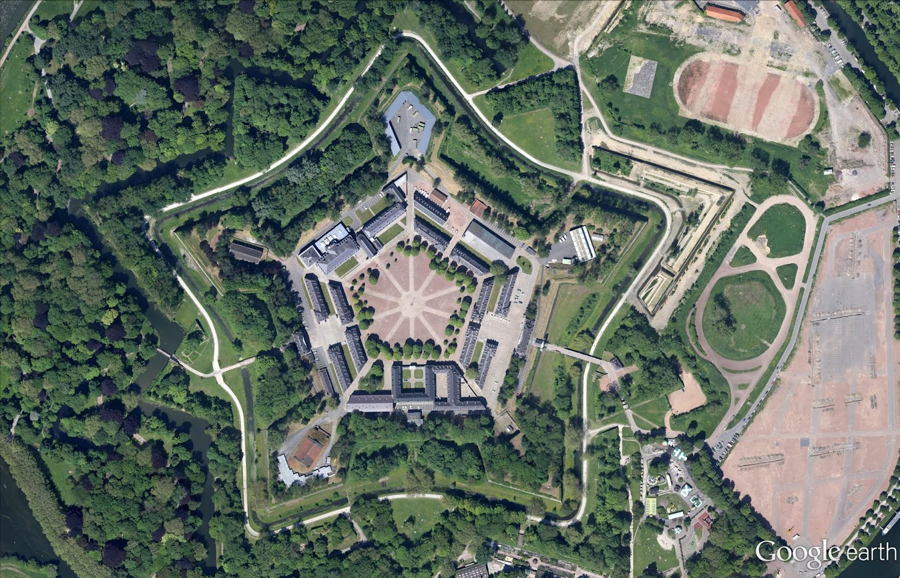 Designed by French Field Marshal Vauban, the “Queen of the Citadels” is the largest and best-preserved citadel in France. A self contained city, it houses 1200 soldiers behind walls in a star formation, which inspired the construction of The Pentagon. Source: Blogspot 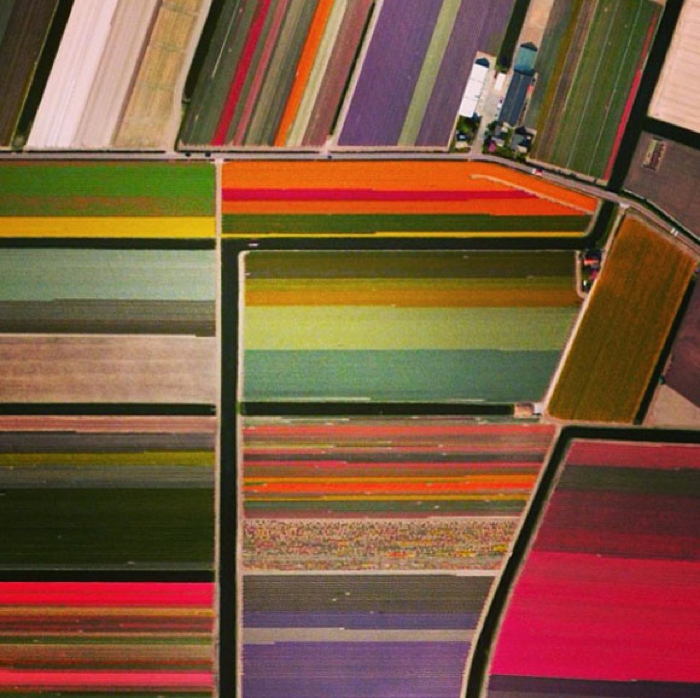 Brilliant colors line the fields in Holland during tulip season. Like a loom, the flowers knit the story of a people and their history. 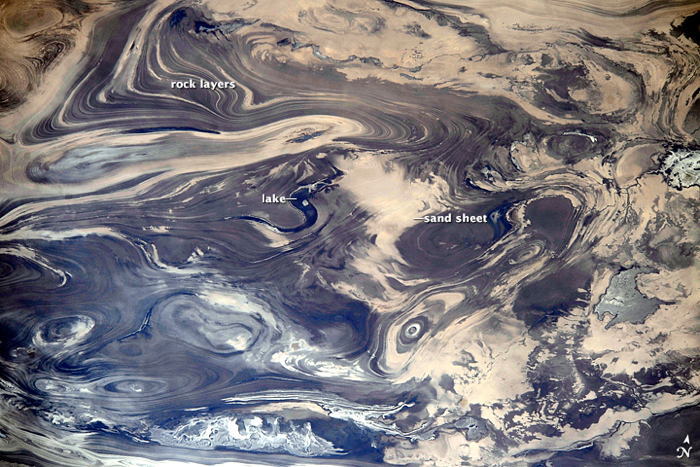 A large salt desert in the middle of the Iranian plateau, the unique soil makeup causes the land to look like cappuccino. 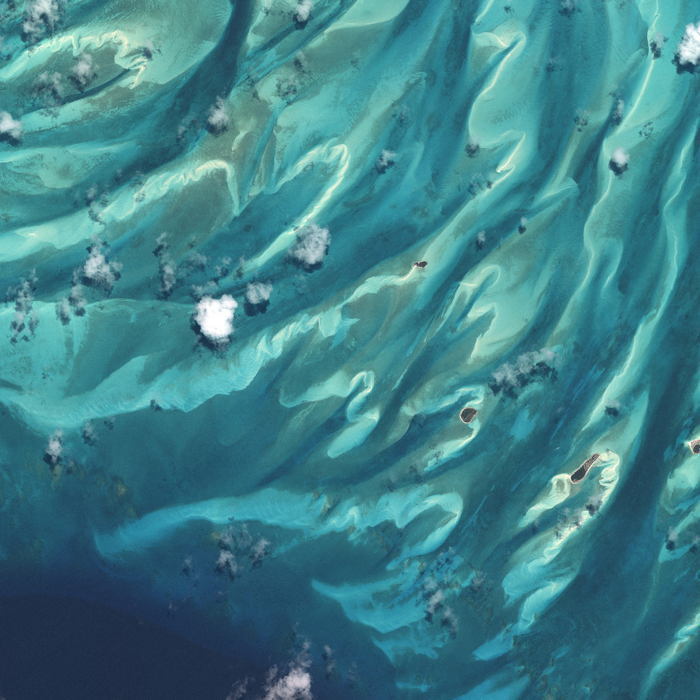 Sand dunes along the Bahamas show how the tides and ocean have shaped them. 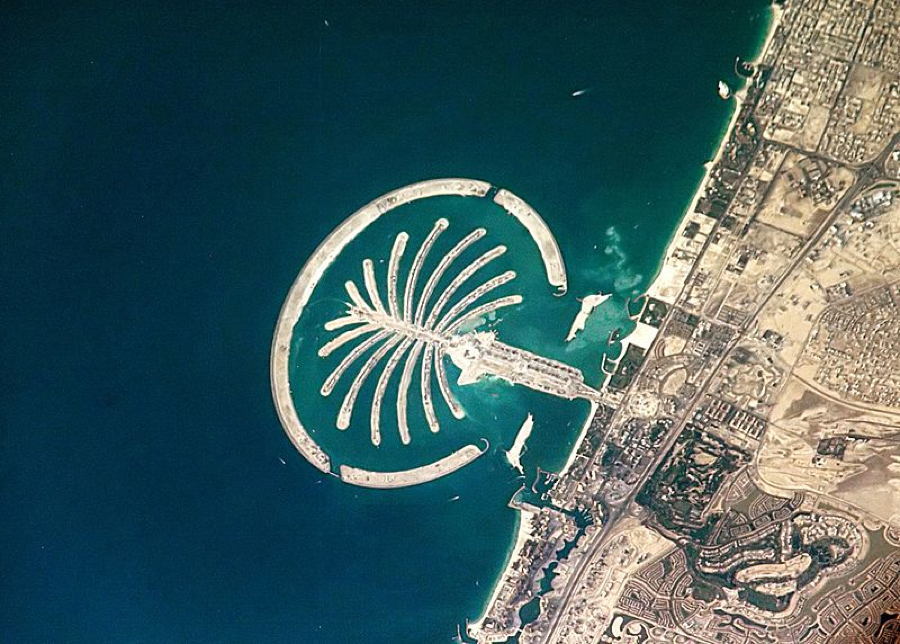 The Palm Jumeirah is an artificial archipelago constructed off of the coast of Dubai in the shape of a palm tree. The New York Times reported that the man-made islands are sinking, but the government refutes those claims. Source: Wikipedia 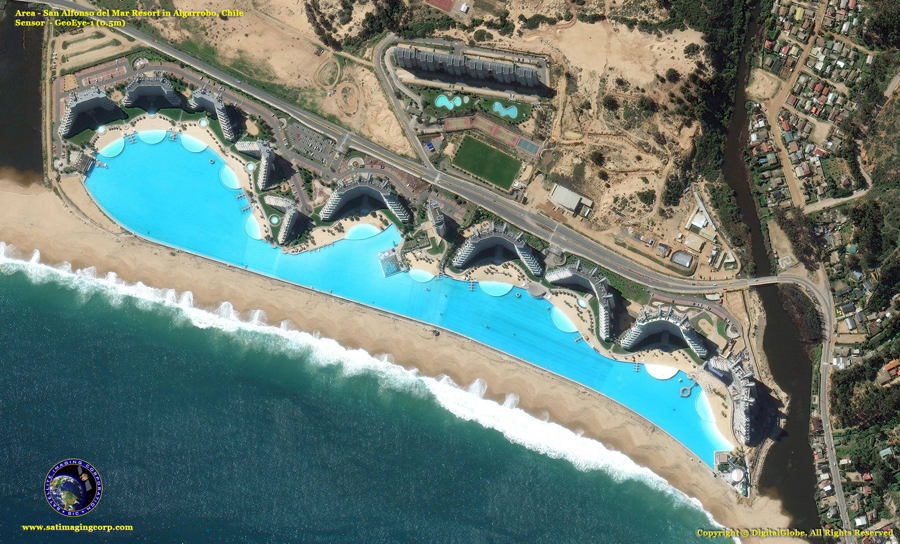 Recognized for having the largest outdoor swimming pool in the world, the private resort of San Alfonso Del Mar pumps water in from the Pacific Ocean that is filtered and treated. The cost of construction was estimated to be 2 billion dollars. 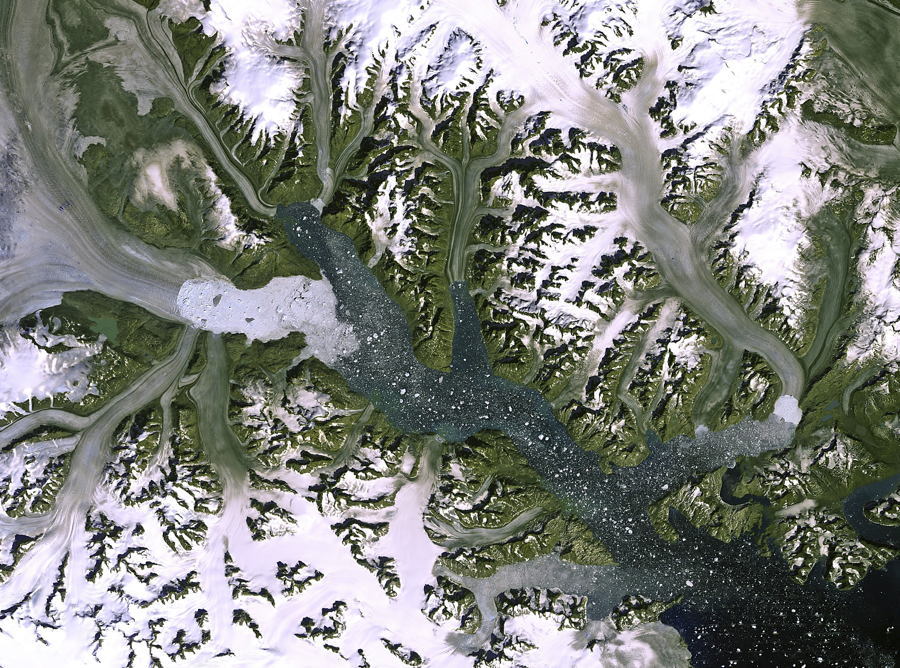 One of the largest outlet glaciers, the Kangerdlugssuaq pushes ice into the ocean. While rapidly moving from 2000 to 2005, it has since slowed again. Source: European Space Agency 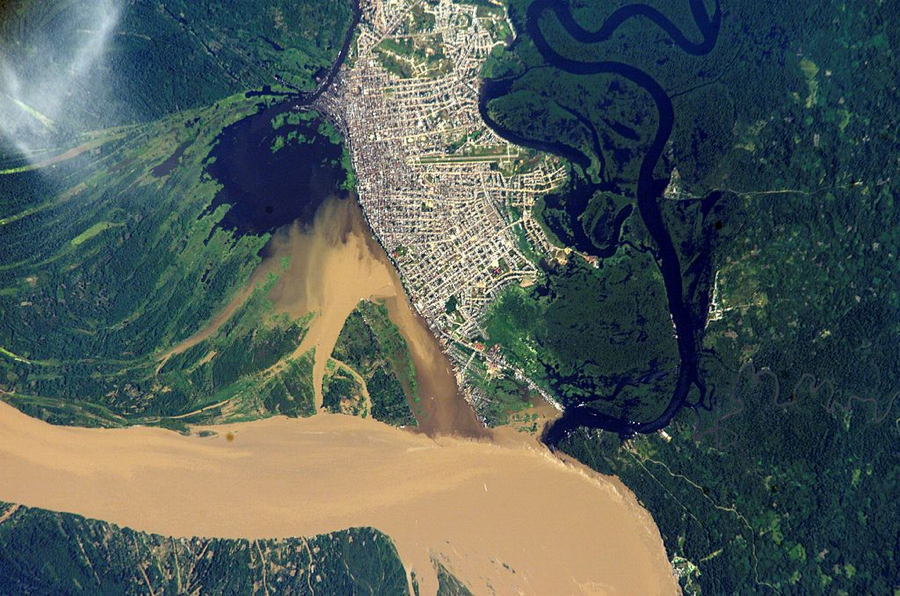 The largest city in the Peruvian rainforest, Iquitos’ motto is Carpent tua poma nepotes, or “Your children will harvest your fruits”. Bordered by Moronococha Lake to the west and surrounded by the Nanay, Itaya and Amazon Rivers, it appears as an island in a river. 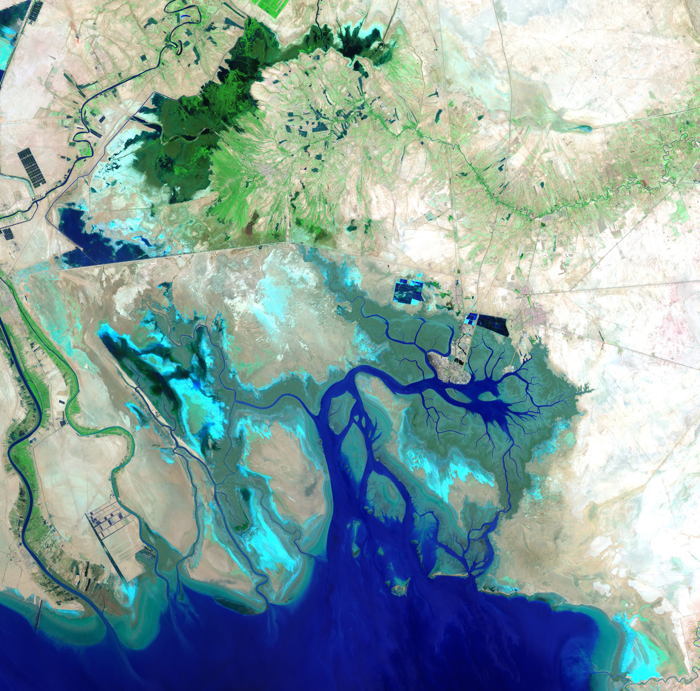 The northern end of the Persian Gulf snakes its way into Iran and Iraq via the Shatt Al-Arab River. In the 1980s, the river was the site of violent protests over rights to the river. Source: European Space Agency 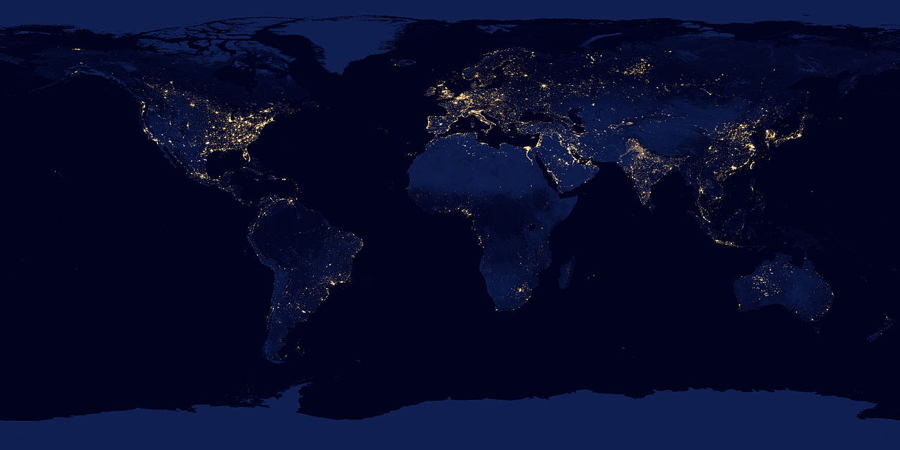 Viewing the Earth at night in this composite photo, one can see the differences among continents, countries, and communities. This is the world at night, overpopulated cities and vast emptiness, industrialized countries and forgotten tribes, city lights and bonfires. Source: Wikipedia

Enjoy this collection of amazing satellite images of Earth? Then be sure to check out All That Is Interesting's other posts on space facts and the best interesting articles.