From New Guinea's poisonous hooded pitohui to the spine-snapping beak of the African shoebill, hope you never cross paths with these scary birds. 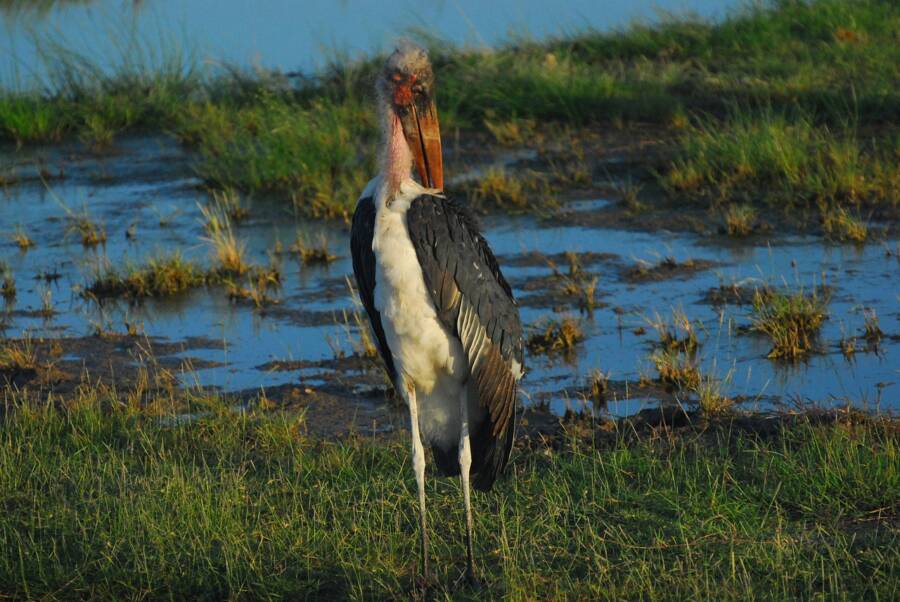 PixabayIf some of these scary birds were just two to three times larger, we’d be in huge trouble.

Birds are commonly associated with tranquility and freedom. But for every singing cockatiel with a cute Instagram, there’s a terrifying pelican that can crush a baby crocodile in one bite.

While the dangerous traits of these scary birds evolved to ensure their survival, some species give us a good reason to be afraid. Don’t forget that even musical legend Johnny Cash was once nearly killed by an ostrich.

Let’s take a look at nine scary birds you’d never want to encounter in the wild.

The Deadly Beak Of The Scary Shoebill Bird 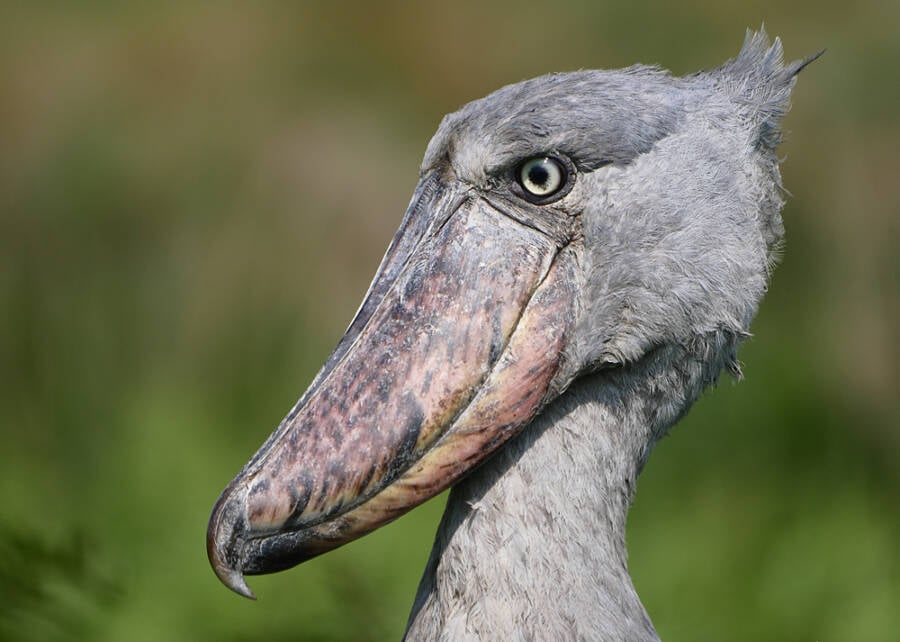 Nik Borrow/FlickrThe shoebill is aptly named, as its beak resembles a Dutch clog.

The shoebill, or Balaeniceps rex, is undoubtedly one of the scariest-looking birds on the planet. It stands at the unnerving average height of four and a half feet with an eight-foot wingspan, and its seven-inch beak can tear through a six-foot lungfish with ease.

Its beak resembles a Dutch clog sitting beneath a pair of enormous eyes that stare with prehistoric indifference. One could argue that the animal’s strange muppet-like appearance is endearing — if it weren’t for the shoebill’s ferocious appetite.

Native to the swamps of Africa, the scary shoebill bird’s prehistoric features are no coincidence. These birds evolved from a class of dinosaurs known as theropods — an umbrella group that included the Tyrannosaurus rex. While not as enormous as that, the shoebill commands a ton of fear in the animal kingdom.

In the past, this avian terror was referred to as the shoebill stork. That monicker was abandoned once experts realized it resembled pelicans more closely, particularly in their ruthless hunting habits.

Nonetheless, the bird has since been classified into a league of its own, called Balaenicipitidae. 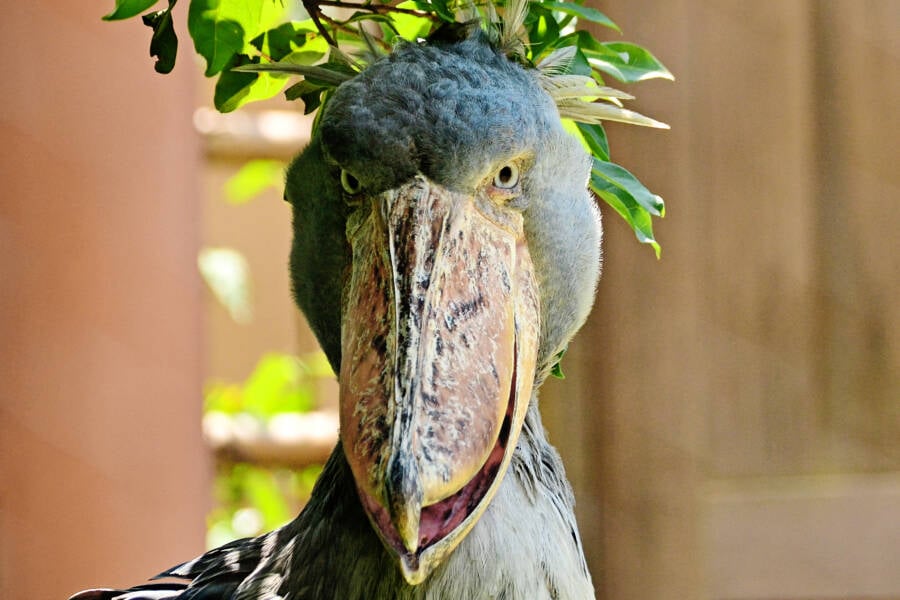 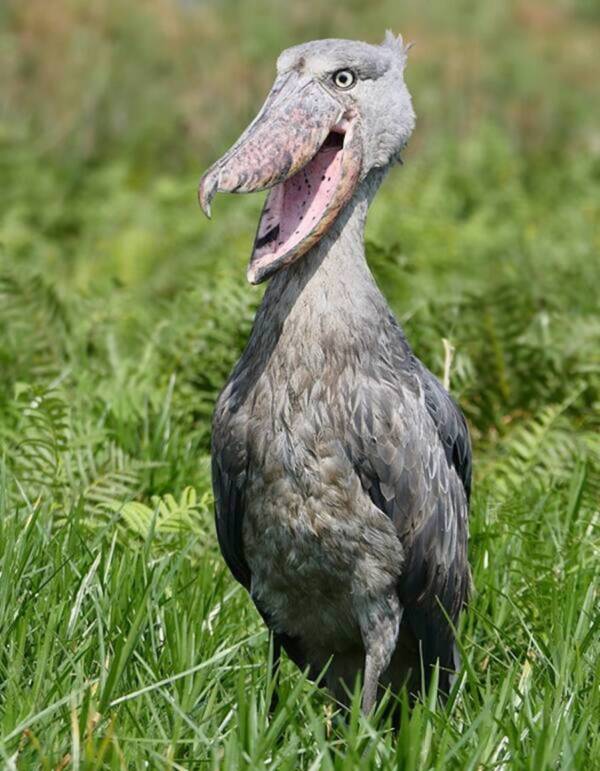 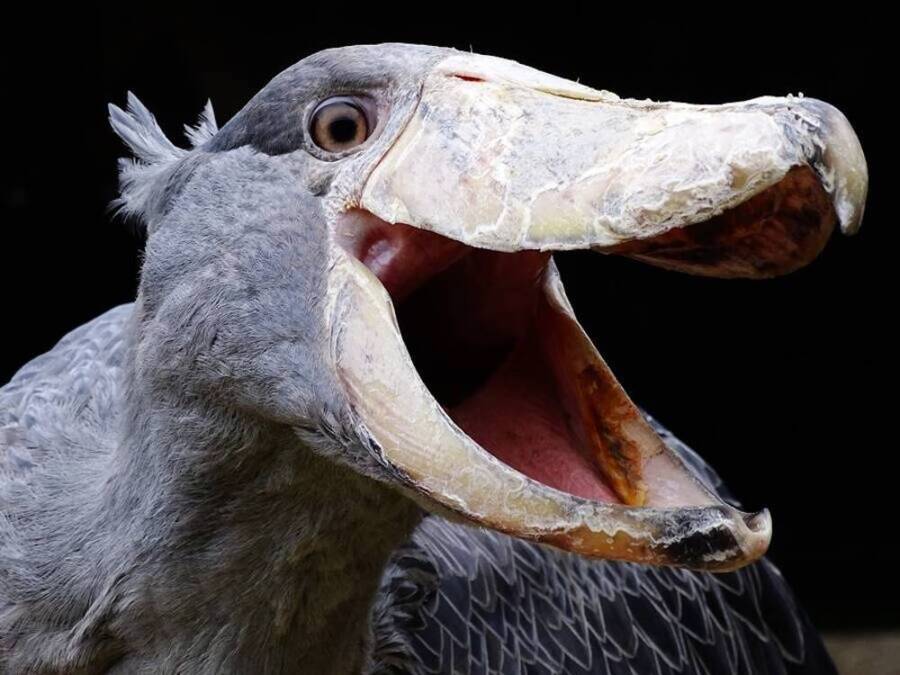 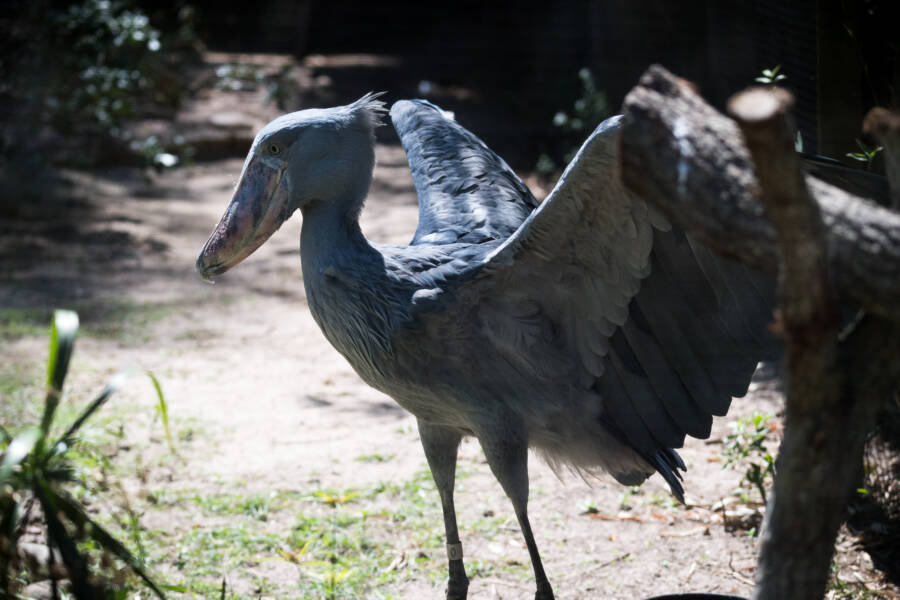 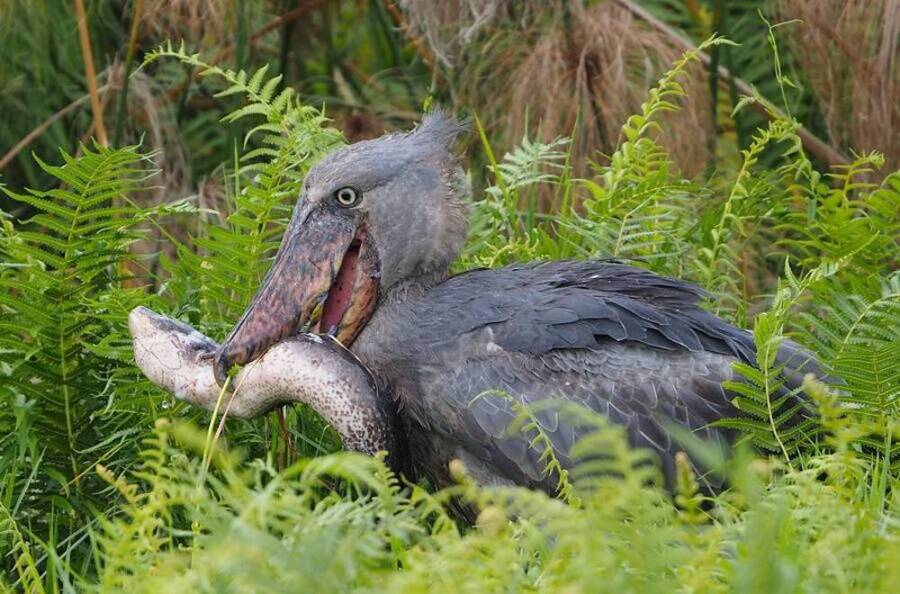 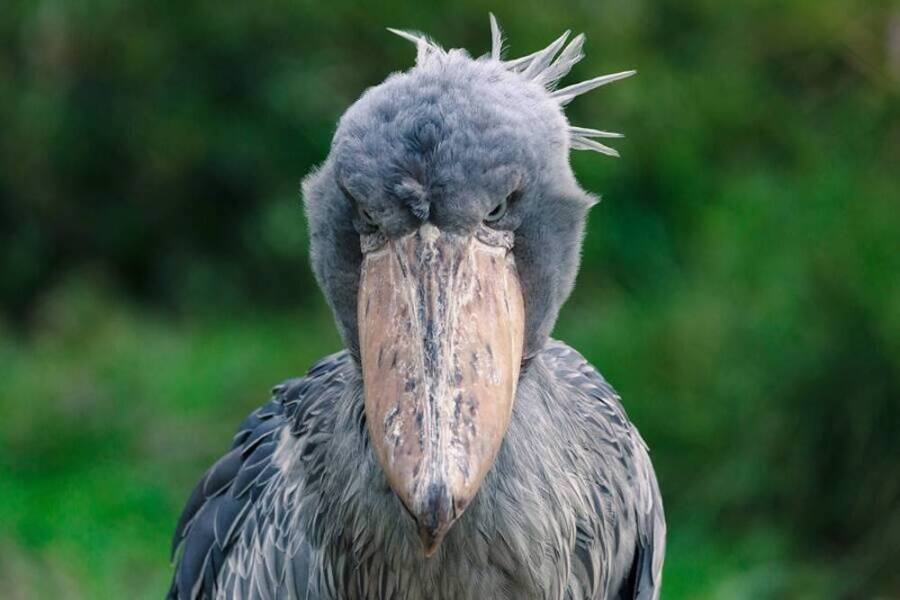 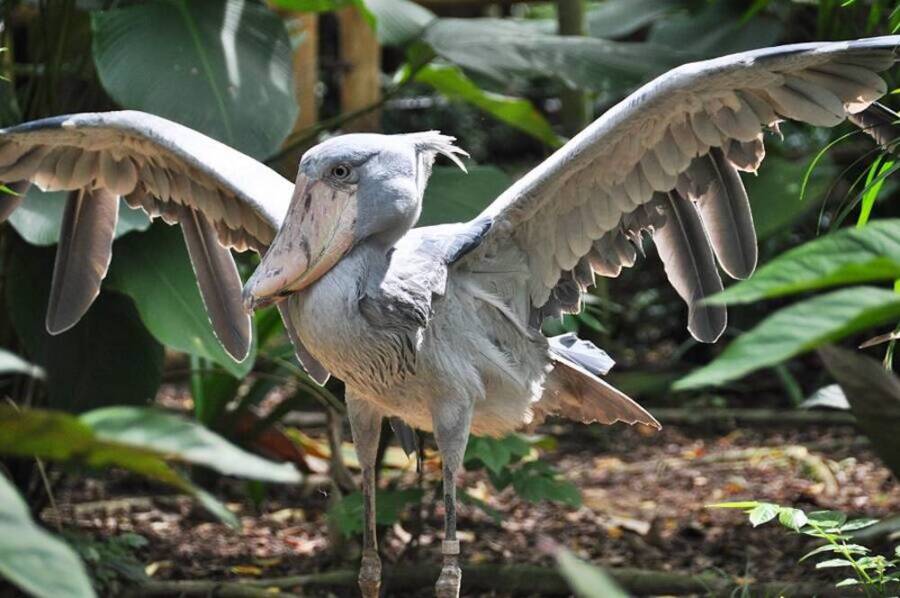 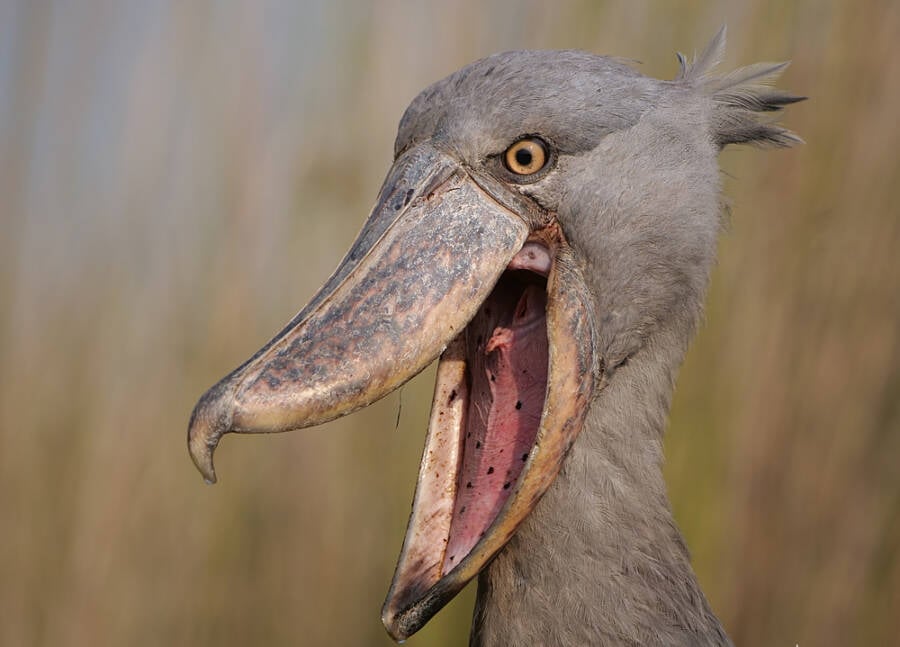 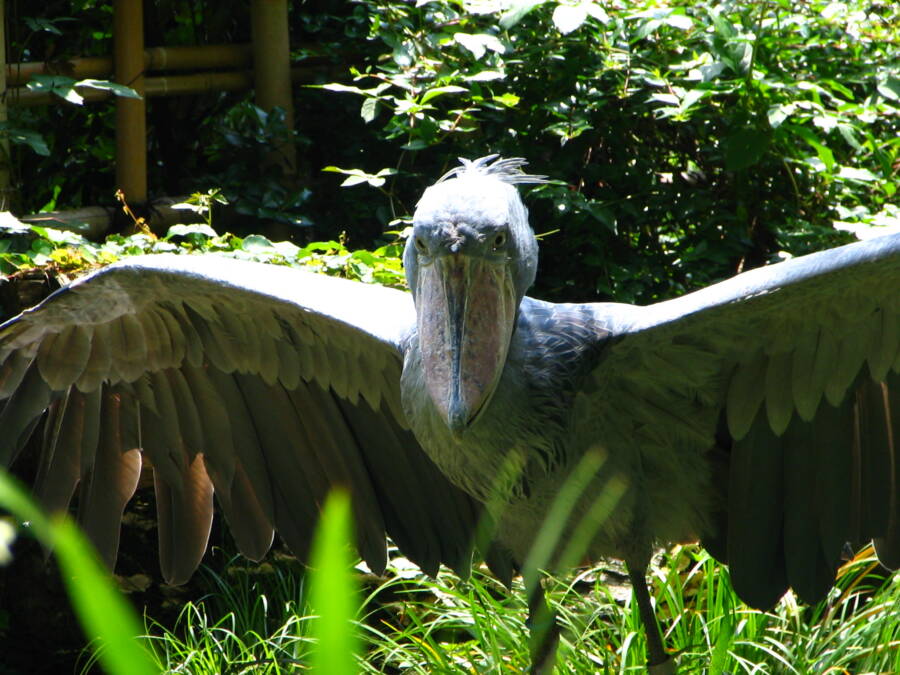 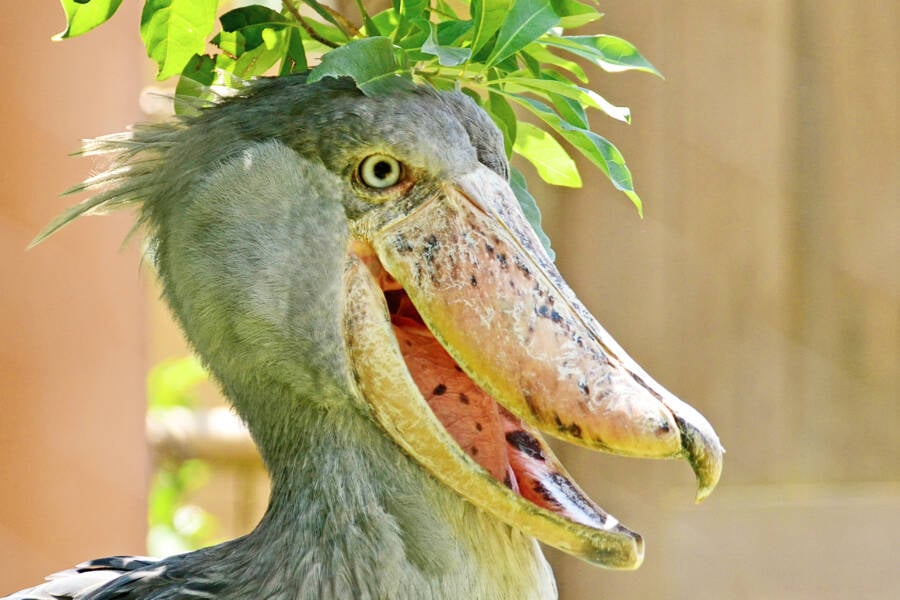 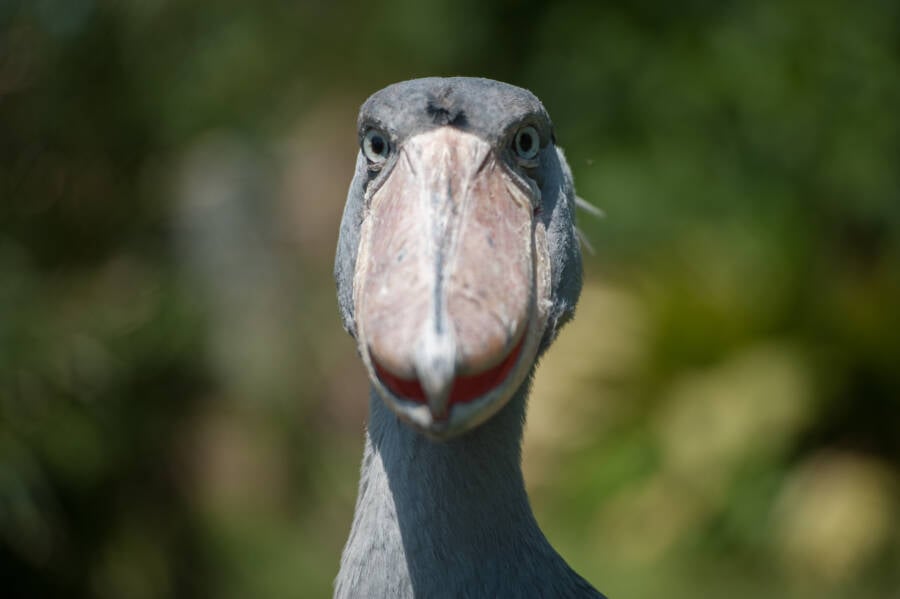 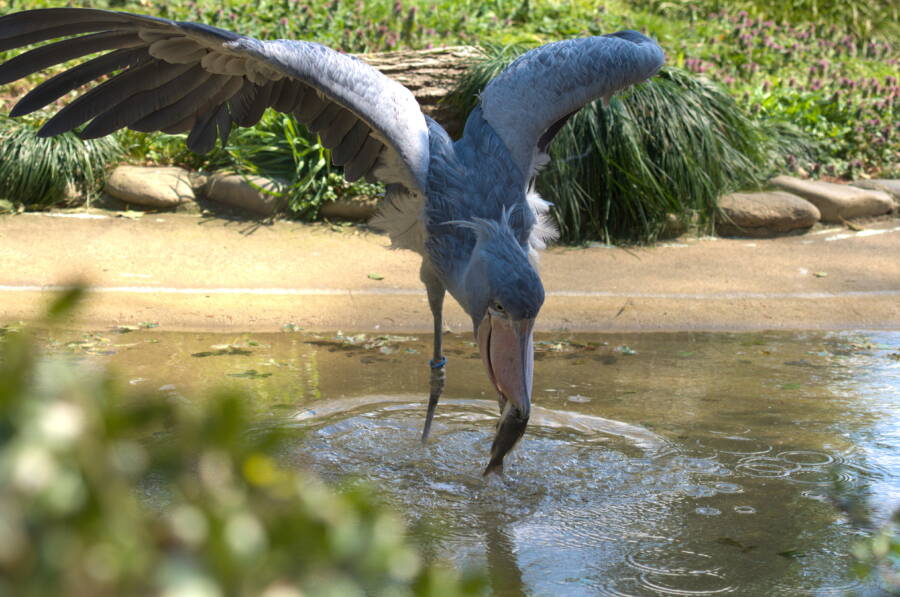 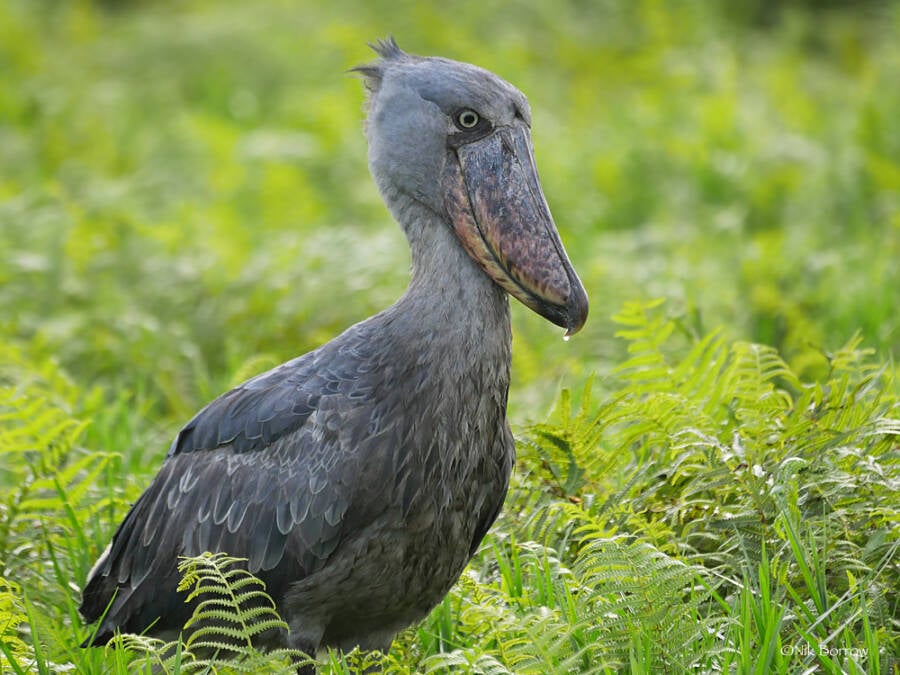 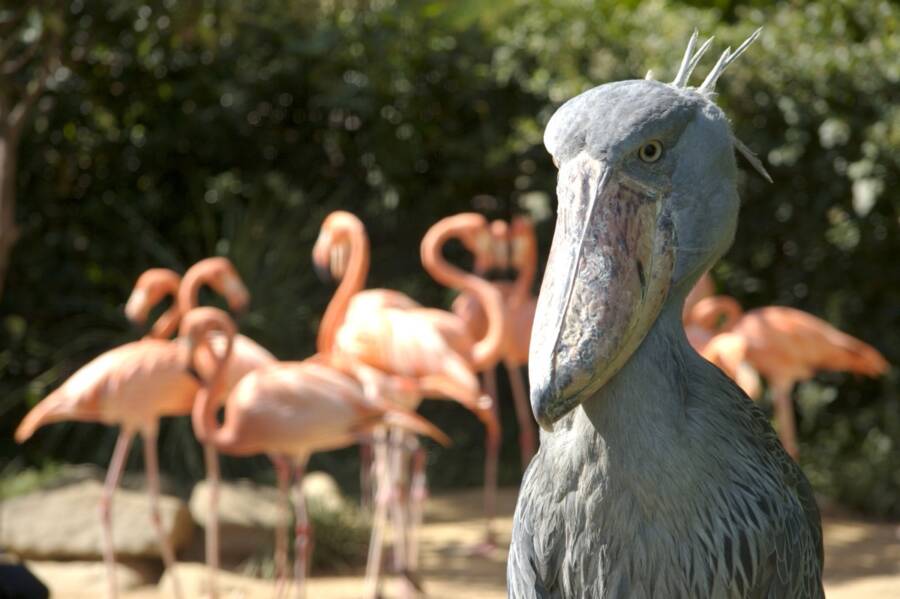 1 of 14
Shoebills feed on catfish, eels, lungfish, frogs, and more.Toshihiro Gamo/Flickr
2 of 14
The scary-looking bird is endemic to swamps of Africa.Nik Borrow/Flickr
3 of 14
The shoebill clacks its teeth to ward off predators and attract mates, with a sound similar to that of a machine gun.Muzina Shanghai/Flickr
4 of 14
The bird was previously referred to as a stork, but more closely resembles pelicans — particularly in their ferocious hunting habits.Eric Kilby/Flickr
5 of 14
The shoebill's seven-inch beak is so strong it can pierce through a six-foot lungfish — and even kills baby crocodiles.Rafael Vila/Flickr
6 of 14
This entrancing bird has yielded up to $10,000 on the black market.Yusuke Miyahara/Flickr
7 of 14
Habitat loss resulting from the logging industry, fires, and pollution have threatened the survival of the species.Michael Gwyther-Jones/Flickr
8 of 14
Both male and female shoebills will take turns incubating their eggs.Nik Borrow/Flickr
9 of 14
The shoebill has an impressive eight-foot wingspan. pelican/Flickr
10 of 14
The seeming smile leads up to a pair of cold-blooded reptilian eyes merely programmed to find prey and survive.Toshihiro Gamo/Flickr
11 of 14
Some have likened shoebills to muppets due to their surreal facial features.Koji Ishii/Flickr
12 of 14
Shoebills will often stand completely frozen for hours at a time before lunging at their prey at full speed.ar_ar_i_el/Flickr
13 of 14
The shoebill will hold cold water in its beak to cool down, and even cover its incubating eggs with water to regulate temperatures.Nik Borrow/Flickr
14 of 14
Only between 3,300 and 5,300 shoebills remain in the wild today.nao-cha/Flickr Colloquially dubbed the "Death Pelican," shoebills have the third-longest bill of all birds behind storks and pelicans. Its interior evolved to be extremely spacious in order to satisfy the large birds' daily needs — and produce a machine gun-like "clapping" sound that attracts mates and scares predators away.

The shoebill's big beak is also useful for filling up with water to cool down, but it's more famous for its ability to kill. This daytime hunter stalks small animals like frogs and reptiles, bigger ones like the 6-foot lungfish — and even baby crocodiles. These patient killers will routinely wait motionless in water for hours.

When this scary bird sees an opportunity to feed, it'll spring into action and attack its prey at full-speed. The sharpened edge of its upper beak can pierce flesh and even decapitate prey.

The shoebill uses its beak to make a sound like a machine gun.

As for the shoebill's reproduction, it builds a nest on floating vegetation and typically lays one to three eggs at a time. Both male and female shoebills take turns incubating the eggs for more than a month and douse them with water to regulate temperatures.

Unfortunately, the shoebill has become a lucrative commodity on the black market, yielding up to $10,000 per specimen. According to the International Union for Conservation of Nature, this and environmental factors have led to only between 3,300 and 5,300 shoebills remaining in the wild today.