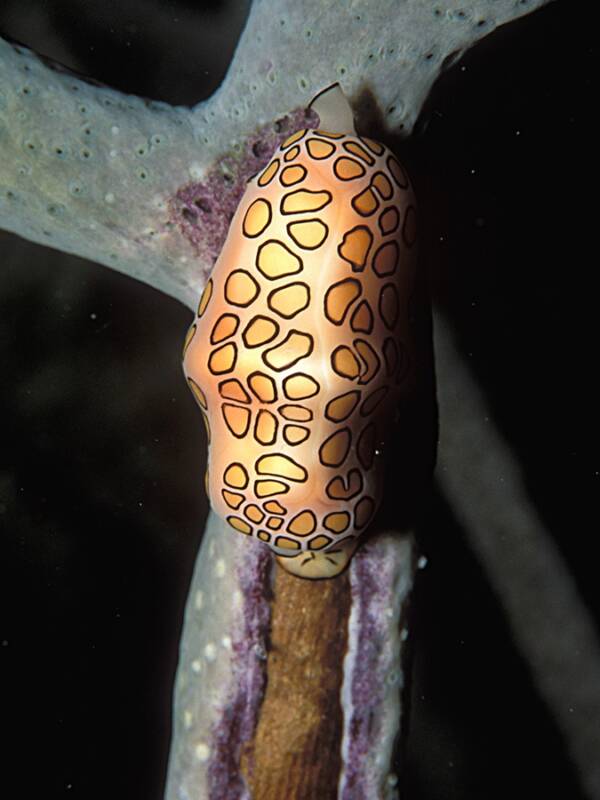 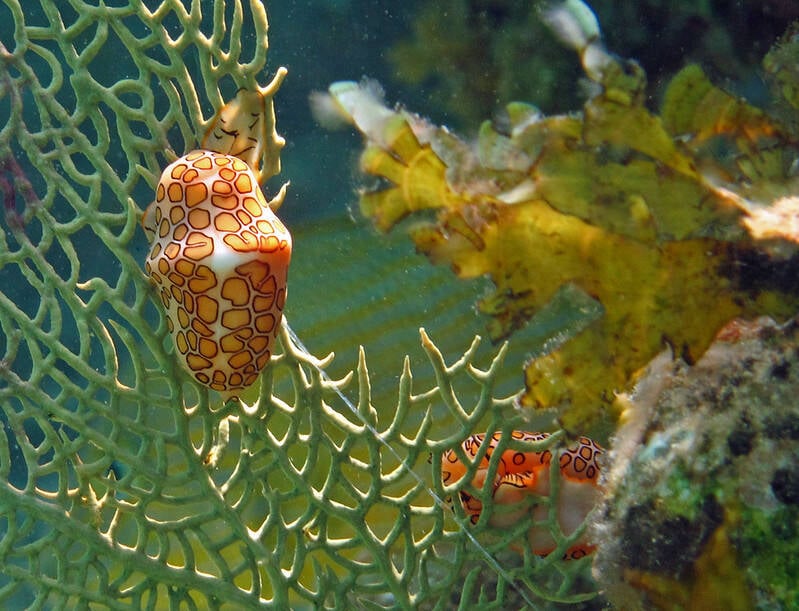 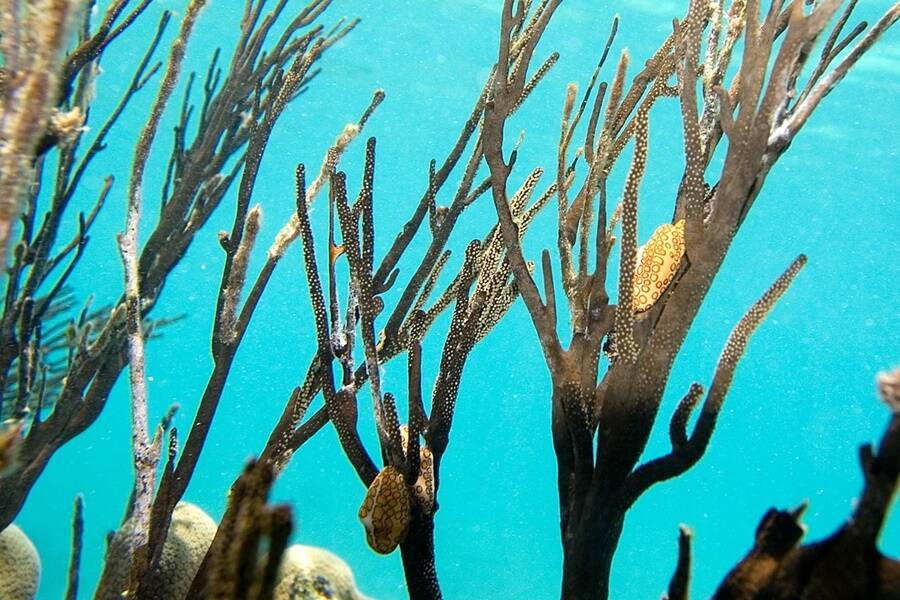 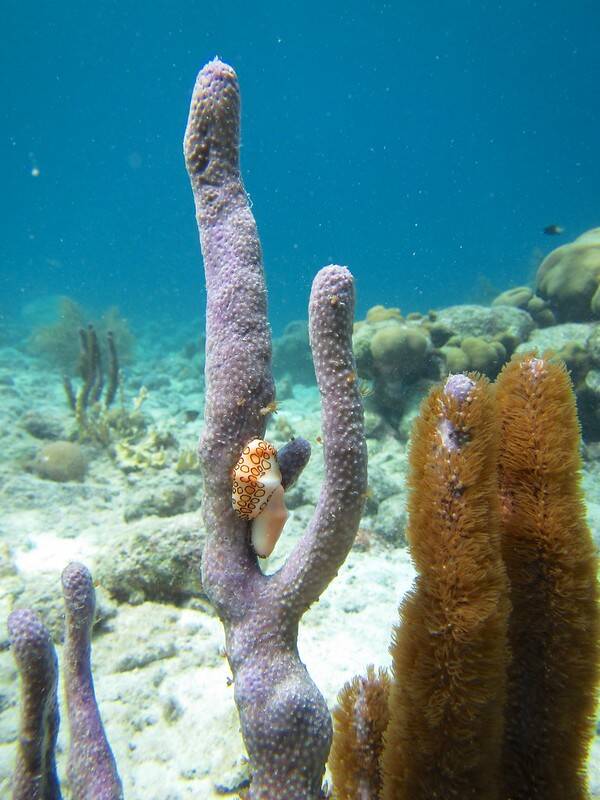 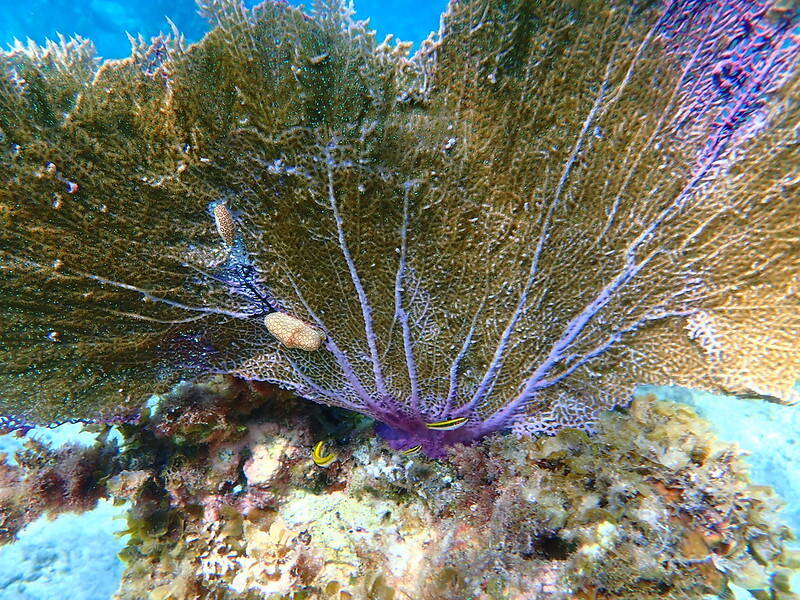 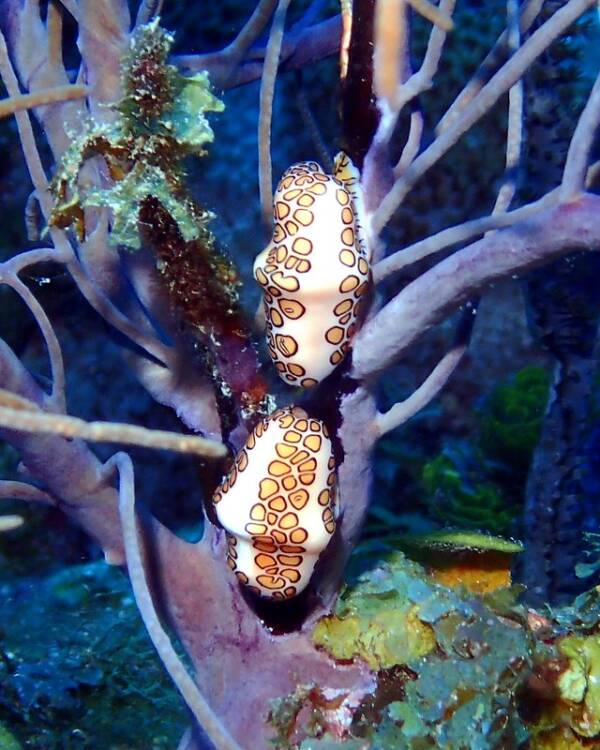 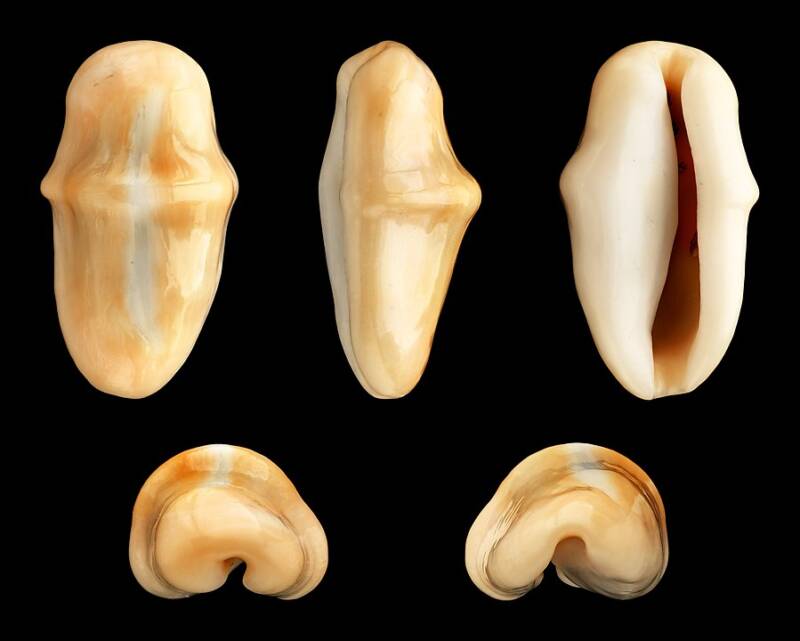 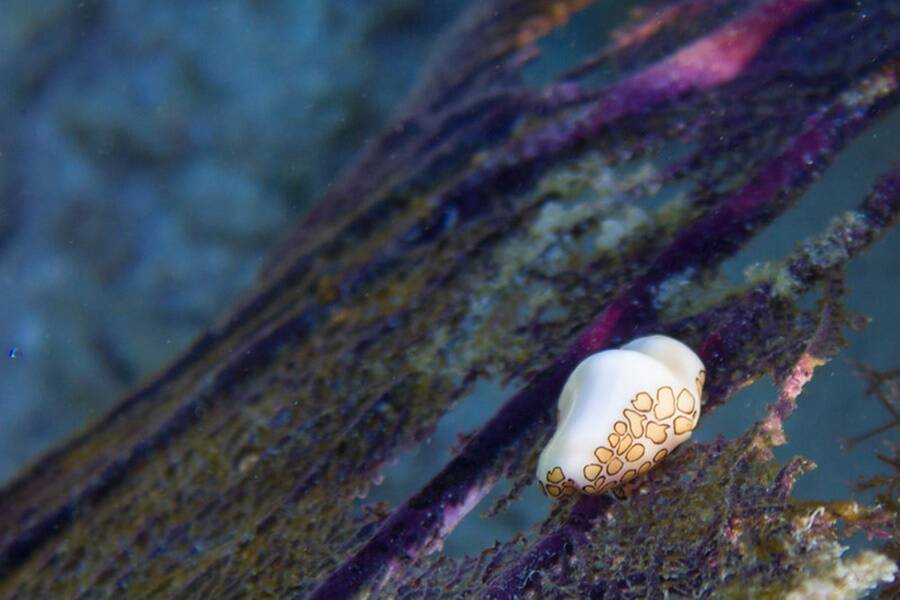 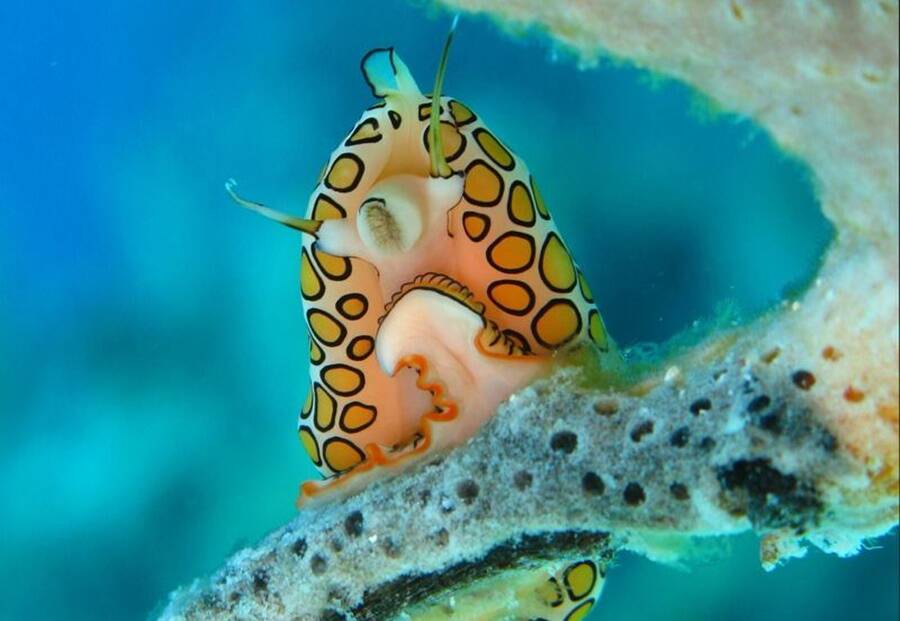 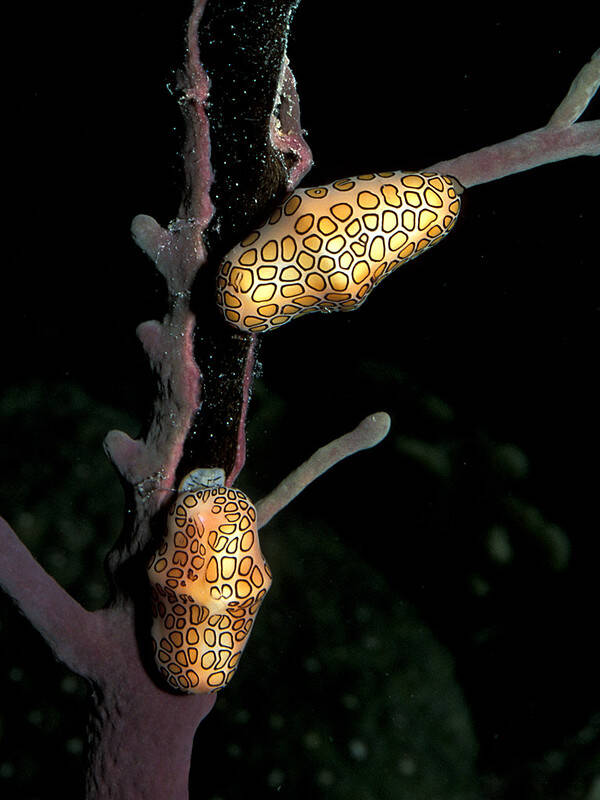 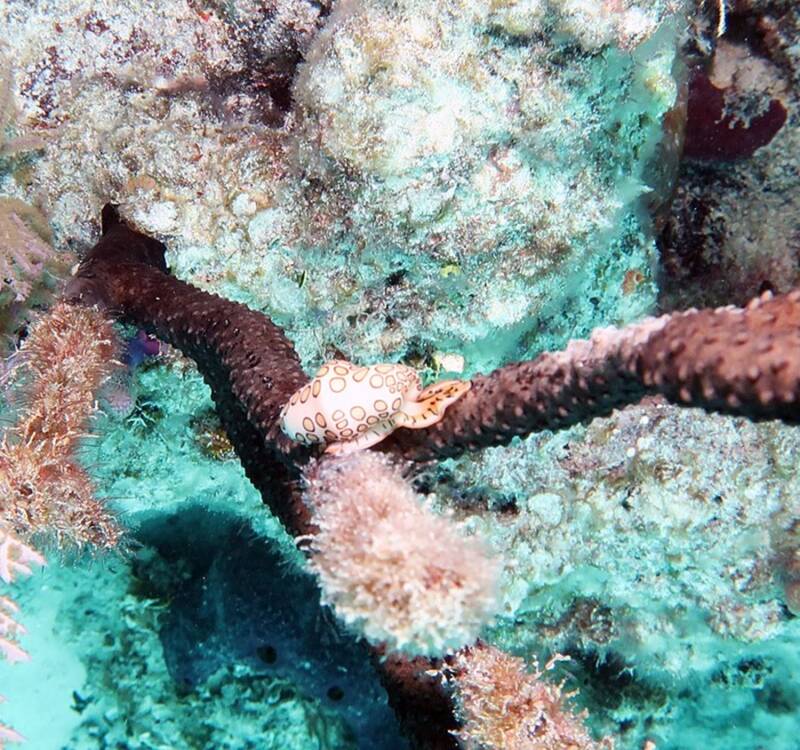 This ability to feed on the toxins of other animals and absorb their properties has been observed in other sea animals like the blue dragon sea slugs. Adam/Flickr
7 of 12
Various perspectives of the flamingo tongue snail's shell. Wikimedia Commons
8 of 12
They break down the corals by secreting enzymes which enable the snail to scrape off the coral skin and digest it. David/Flickr
9 of 12
The head of a flamingo tongue snail. Like land snails, they possess a radula underneath their bodies which is used to move their body and to eat.Roatan Marine Park
10 of 12
The flamingo tongue snail is a solitary animal. Breeding happens whenever a male and a female happen to cross paths. Laszlo Ilyes/Flickr
11 of 12
A single flamingo tongue snail perched on a coral. Despite its toxicity, the sea snail has unfortunately become a hot commodity among unknowing divers.Wikimedia Commons
12 of 12 These weird ocean creatures measure about one inch in length and are found in the subtropic and tropical waters of the Atlantic and the Caribbean, spanning off the coast of North Carolina in the U.S. all the way to the waters of Brazil. They feature a visually striking "shell," which is actually the mollusk's living tissues.

Like land snails, these sea creatures possess a wavy "foot" known as the radula which is located underneath their bodies. It is used by the snail to move its body across sea fans and coral and also to eat.

They feast on an array of sea fans, sea plums, and other sea corals. The flamingo tongue snail breaks down these corals by secreting enzymes that weaken the coral, which then enables the snail to scrape off the highly toxic skin of the coral and digest it.

The flamingo tongue snail can feed on toxic coral tissue without being harmed by absorbing the toxins and using it themselves as a potent defense mechanism. This ability to feed on the toxins of other animals and absorb their properties has been observed in other sea animals such as blue dragon sea slugs.

The flamingo sea snail is a solitary animal and breeding occurs only when a male and female happen to cross paths. After the fertilization process, which can take up to four days, the females will attach their fertilized eggs to the bare skeleton of a coral.

Then, the eggs will hatch after about a week. The larvae will feed on plankton as they float through the water until they mature.

In spite of their potential threat as toxic creatures, flamingo tongue snails have become a hot souvenir among scuba divers and swimmers who find them in the ocean. They are not an endangered species but lack of education among human poachers has likely affected their ocean population at least somewhat.