The Ugly Truth About Shark Fin Soup, The Delicacy That Could Drive Some Species To Extinction

Shark finning kills about 73 million of these animals each year just so we can make shark fin soup, a traditional dish that remains popular despite sometimes being toxic.

An ancient Chinese dish that’s said to signify prosperity, shark fin soup remains a coveted meal to this day throughout many regions around the globe. It’s so sought-after that a single bowl can go for up to $100.

But there is a dark side to this dish.

When sharks are captured and finned alive, they’re rendered immobile and often released back into the water, leaving them to either sink to the bottom of the ocean and suffocate or be eaten by alive by other predators. All in all, shark finning kills tens of millions of sharks this way each year, putting some entire species in peril.

But shark fin soup still fuels a multi-billion-dollar industry, even though this dish can actually be toxic to humans.

So, despite the dangers to both humans and sharks, why are people still ordering shark fin soup?

What Is Shark Fin Soup And Where Does It Come From? 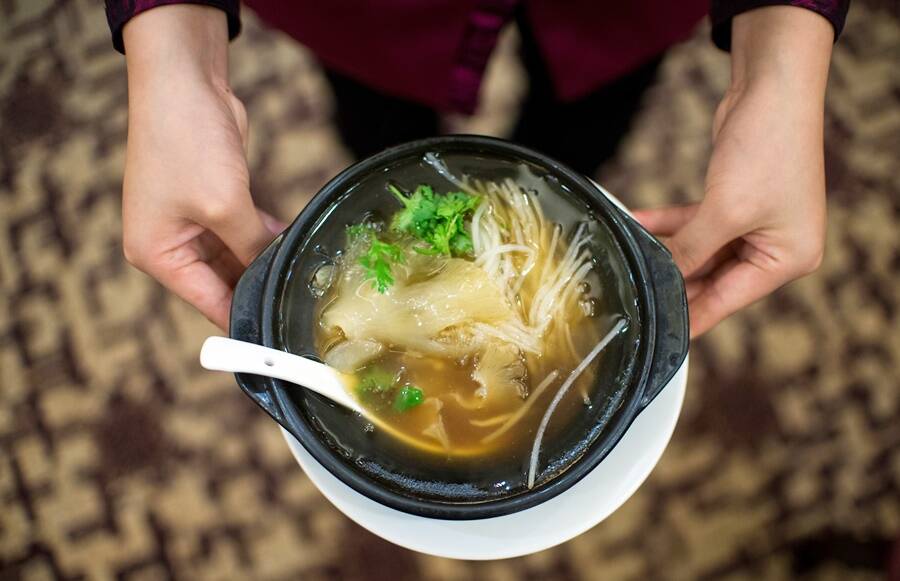 Johannes Eisele/AFP via Getty ImagesEnvironmental groups have argued that the high demand for shark fin soup has decimated global populations.

Shark fin soup originated as a delicacy in China during the Song Dynasty of 960 to 1279.

Because the dish was made from the most fearsome creatures in the ocean, it represented power and wealth for whoever ate it. Even today, shark fin soup is considered a symbol of prosperity and good fortune.

From ancient times to the present day, shark fin soup has always been made from the shredded cartilage of a shark’s dorsal fin (the fin on the top of its back). The cartilage is said to add flavor to the broth (though many claim that’s not true) as well as thicken it, but cooking down the cartilage and preparing the rest of the soup requires a laborious four days of work. Because the soup requires such strenuous preparation, serving it is considered a show of tremendous hospitality.

The difficulty of preparing it likewise made shark fin soup a popular and status-signifying dish among the Chinese elite throughout the Song Dynasty and into the Qing Dynasty, which lasted from 1644 to 1912. But when the Chinese Communist Party came to power in 1949 and the former emblems of wealth and status became vilified, the consumption of shark fin soup experienced a sudden decline.

But by that time, other countries with large Chinese populations, including Taiwan, Vietnam, Singapore, Malaysia, and Hong Kong, had also taken to this delicacy. 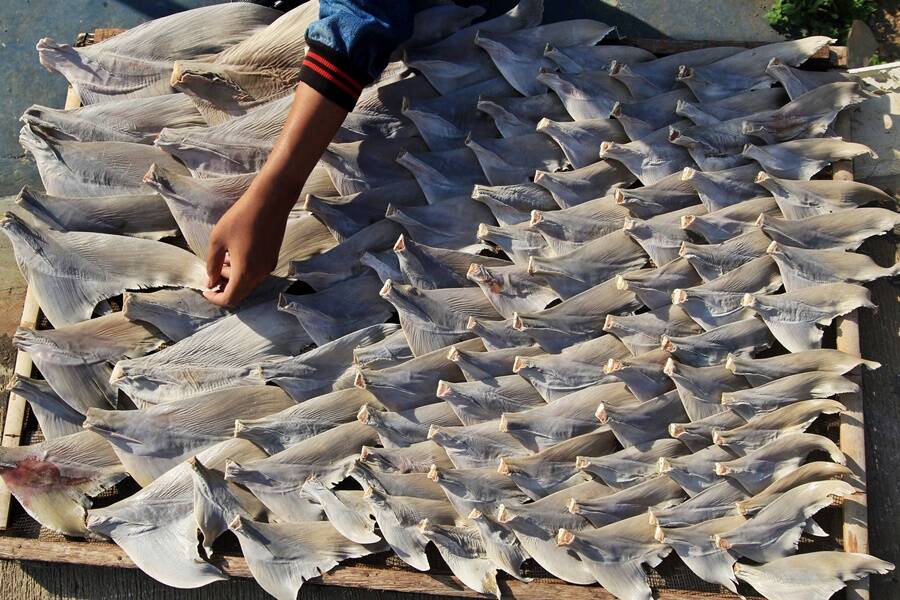 Sijori Images/Barcroft Media via Getty ImagesEurope and South America import more than half of the global market’s shark meat.

“There was an old saying in Hong Kong in the 1970s: ‘To stir shark fin with rice,'” said Tracy Tsang, manager of the World Wildlife Fund’s Footprint program in Hong Kong, where shark fin soup continues to be a popular dish.

“It was used to describe the lifestyle of the wealthy, implying that they were rich enough to afford shark fin on a daily basis.”

Though shark fins soup had established its popularity with those who wanted to show off their wealthy lifestyle outside of China, it experienced a renaissance in its home country in the 1980s. As China underwent massive economic reform and slowly opened itself up to a form of modified capitalism, its growing upper and middle classes suddenly had more money to spare. Thus shark fin soup was once again prominent as a sign of prosperity for those who wanted to flaunt their new wealth.

Today, however, the dish that was once reserved for the rich has become widely available and commercialized because shark finning can now be done more cheaply.

A bowl of shark fin soup can even go for as little as $12 depending on the style and preparation of it. Upscale restaurants, however, can still charge more than $160 for a bowl.

The Brutality And Environmental Impact Of Shark Finning 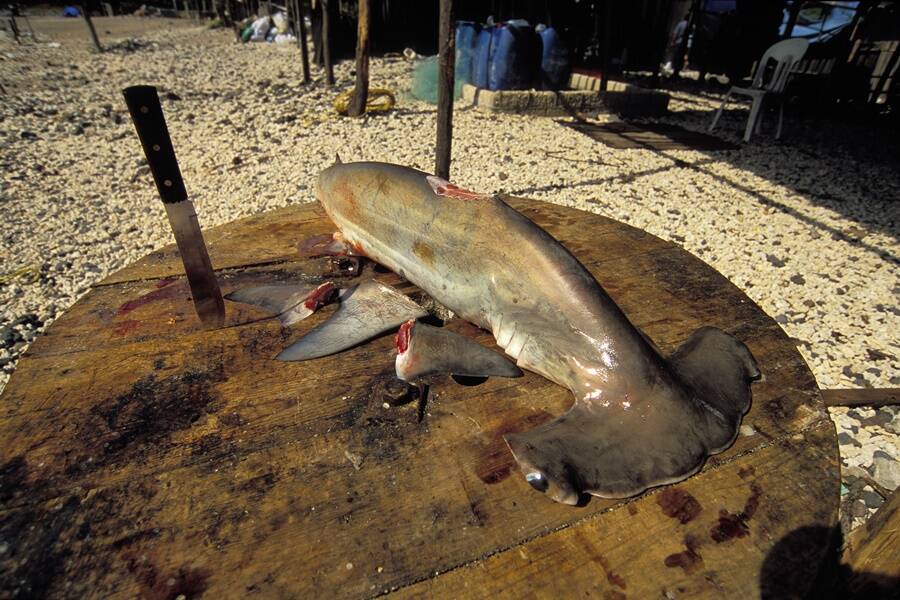 Mark Conlin/VW PICS/UIG via Getty ImagesCorpse of a hammerhead that was a victim of shark finning at a camp in Mexico.

The popularity of shark fin soup has made shark fins a valuable commodity. Fishermen can sell fins for as much as $500 a pound, sometimes even more.

To meet the market demand for this expensive ingredient, fishermen who engage in shark finning typically slice off the shark’s dorsal fin and throw the rest of the animal’s body back into the sea.

Despite making up only five percent of a shark’s body weight, the dorsal fin is integral to its survival. A shark that has been finned is unable to swim, balance, or breathe properly.

Thus, sharks that have been finned usually die from blood loss or suffocation.

According to the Smithsonian Institute, an estimated 100 million sharks are killed this way each year, while other estimates put the number closer to 73 million. 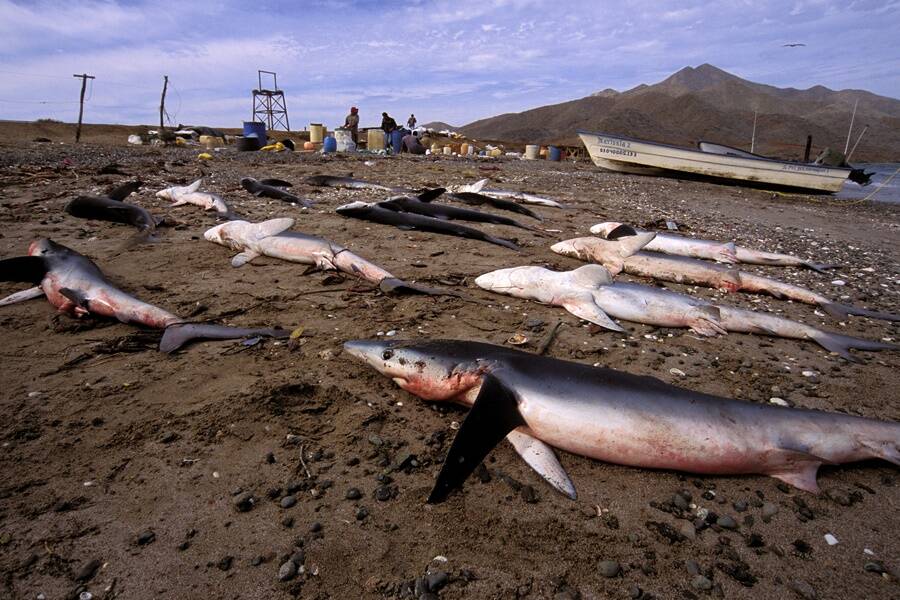 Mark Conlin/VW PICS/UIG via Getty ImageThe practice of shark finning among fishermen has led to the gruesome death of millions of sharks.

But it is not just the fins that people are after. Shark meat is considered a delicacy across many cultures.

For instance, in Iceland, there is a traditional dish known as Hákarl, which involves wrapping up the raw meat of the elusive Greenland Shark and burying it in the ground to ferment before it is eaten. Some British fish and chips shops use shark meat while Spain and Italy — both of which are among the highest importers of shark meat in Europe — have their own style of shark-based dishes.

“Europe and South America are the largest retail markets for shark meat, and the top 20 importers have remained stable [between 2008 and 2017] with Brazil, Spain, Uruguay, and Italy accounting for 57 percent of average global imports over this time,” a recent report from non-profit organization Traffic stated.

While shark fin soup is not the sole driving force behind shark hunting, experts believe its global popularity is nonetheless a considerable factor in the shark population’s sharp decline.

The popularity of shark finning combined with these animals’ slow reproductive rates means that they are especially vulnerable.

Some shark species are already endangered or considered vulnerable, such as the scalloped hammerhead or the smooth hammerhead. Furthermore, the disappearance of top predators like sharks can also have dangerous consequences on the ocean’s ecosystem as a whole.

Why Shark Fin Soup Is Unsustainable For Humans And The Environment 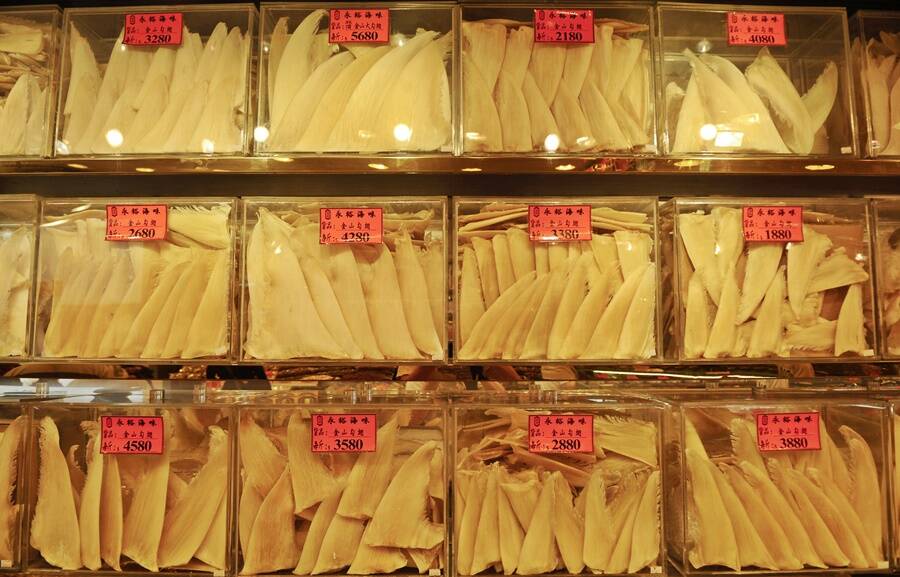 Dale de La Rey/AFP via Getty ImagesNearly 100 million sharks are killed each year primarily for their fins. A single fin can be worth more than $1,300.

In addition to its environmental impact, consuming shark meat can be hazardous to human health. Because they are at the top of the ocean’s food chain, sharks experience a bioaccumulation of toxins from the fish that they prey on. What this means is that sharks will ultimately ingest whatever toxins were consumed by the smaller fish they prey on as well as the toxins found in the even smaller fish that those fish preyed on, and so on until the bottom of the food chain.

Recent studies have shown this leads to high concentrations of mercury, methylmercury, and other poisonous metals in shark meat. And yet, for some, consuming shark fin soup is a historical tradition that needs to be preserved despite the health risks.

But as humans have begun to understand the consequences of consuming sharks, a growing conservation movement has emerged that’s geared toward changing the public’s attitude about shark-based foods.

In China, nationwide conservation campaigns have reportedly helped to reduce the consumption of shark fin soup by 80 percent since 2011. Customers instead are slowly yet steadily embracing more sustainable substitutes for shark fins, such as sea cucumber, bird’s nest, or non-animal products. 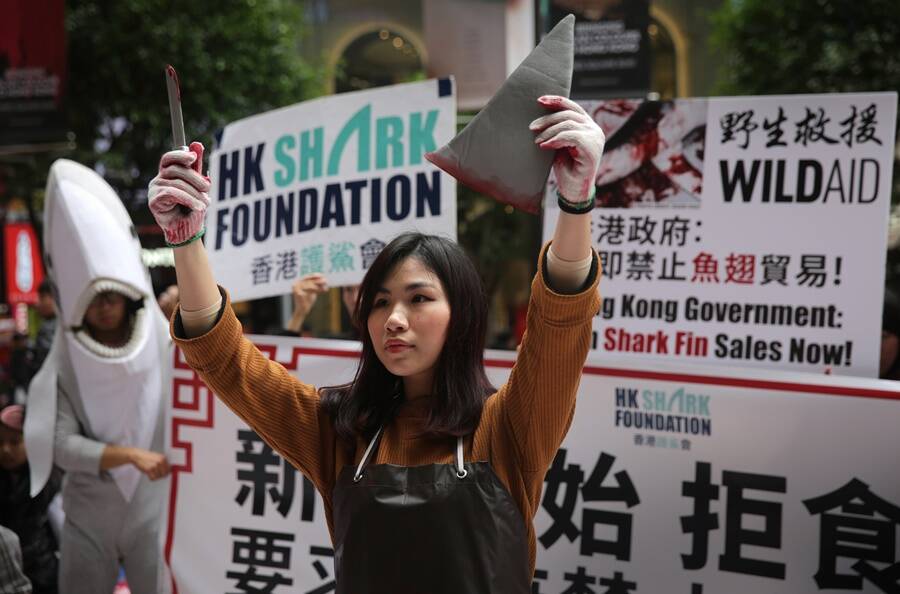 Isaac Lawrence/AFP via Getty ImagesAn activist during a protest to draw attention to the shark fin trade in Hong Kong, which is among the biggest importers of shark fins in Asia.

Additionally, the U.K., the European Union, and several states across the U.S. have all bans the sale of fins altogether.

Though with plenty of restaurants in those U.S. states nevertheless caught serving shark fin soup, the fight against this controversial delicacy continues on. In fact, when celebrity chef Gordon Ramsay undertook an investigation into the illegal shark trade for his Shark Bait documentary in 2011, he found scores of restaurants and fisheries across Asia, Europe, and the Americas that were illicitly harvesting and selling fins.

An excerpt from Shark Bait.

Throughout, Ramsay encountered restaurant owners who refused to stop selling the dish despite bans, diners who ordered it even though its fueled by cruelty, and fishermen who justified shark finning regardless of its environmental consequences. And when Ramsay witnessed shark finning for himself, he concluded that it was “the worst act of animal cruelty I’ve ever seen.”

But perhaps with more of this sort of attention on shark fin soup, this age-old dish may eventually disappear for good.

After learning about shark fin soup, read about Megalodon, the prehistoric shark 10 times the size of a T. rex. Then, learn about the gruesome hunting method that killer whales use on sharks.