Discover the heroic life and tragic death of Lakota chief Sitting Bull, one of the most legendary Native American warriors of all time.

As Sitting Bull prepared to take on U.S. troops in 1876, he began to dance. On the banks of the Little Bighorn River, the Lakota chief danced for 36 hours, had his arms cut 50 times, and saw a vision of U.S. soldiers falling like grasshoppers from the sky. Sitting Bull thought that this vision predicted the defeat of the U.S. forces in an upcoming battle.

But Sitting Bull’s success also marked the beginning of the end. His victories slowed — but did not stop — the push of white settlers into the American West. Sitting Bull spent the rest of his life on the run, in prison, and performing in Wild West shows — until Indian police gunned him down. 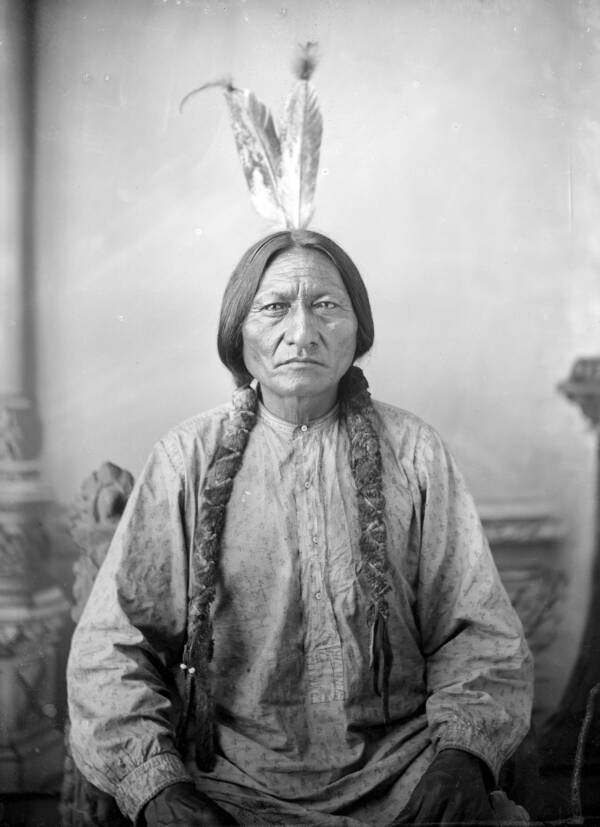 Born around 1831 in either modern-day South Dakota or Montana as Jumping Badger, Sitting Bull didn’t seem destined to become a warrior. His father, Returns-Again, even nicknamed his son “Slow” for his quiet demeanor.

But as he got a little older, the Teton Dakota boy began to show his true colors. At the age of 10, he bravely slew a buffalo for the first time. And at 14, he showed courage by knocking a Crow warrior from his horse.

His father was so proud that he renamed his son “Tatanka Yotanka” or “Sitting Bull.” Many Native Americans saw buffalo as fearless, strong, and stubborn creatures — and Sitting Bull seemed to embody those qualities.

Before long, Sitting Bull joined the Strong Heart warrior society and enlisted in the Silent Eaters, who watched out for the tribe’s welfare. By 1857, he’d been named a “war chief” and was widely recognized as a holy man.

But Sitting Bull and his people soon faced a formidable new foe. White settlers had started to flood west — and clash with Indigenous tribes.

The Broken Promises Of The Fort Laramie Treaty 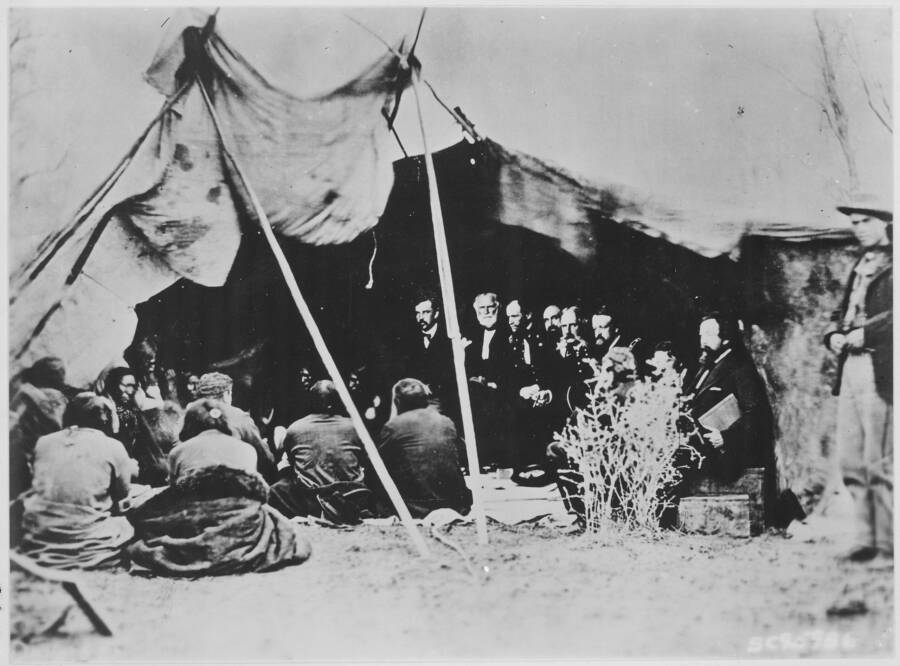 Department of DefenseNative American chiefs and delegates from the U.S. government gather to sign the Fort Laramie Treaty of 1868.

Starting in 1863, Sitting Bull battled U.S. troops for the first time ever. At the time, the U.S. Army was targeting another group of Indigenous people, who had risen up when federal agents withheld essential items from them on their reservation. Witnessing this type of betrayal made Sitting Bull vow to never sign a treaty that would push his people onto any reservation.

Though Sitting Bull certainly realized that this stance — and his ongoing resistance of the U.S. government — would lead to difficulties down the line, he refused to compromise his beliefs. “The whites may get me at last… but I will have good times until then,” the bold warrior declared.

He looked on with distrust as chiefs across the Great Plains sat down to hammer out treaties with the U.S. government. While many of the leaders agreed to the Fort Laramie Treaty of 1868 — which created the Great Sioux Reservation and promised to provide additional land to the Sioux in places like Nebraska and Wyoming — Sitting Bull adamantly refused to sign.

“I wish all to know that I do not propose to sell any part of my country,” Sitting Bull said. “Nor will I have whites cutting our timber along the rivers.”

Sitting Bull’s strong stance earned him many admirers, and even led to his ascension as the supreme leader of the Lakota Sioux, a title that no one had ever held before. In that role, the chief had loose command of the many autonomous bands of Lakota Sioux people who lived in the Great Plains.

And it didn’t take long for him to prove prophetic. In 1874, prospectors discovered gold in the Black Hills, a sacred spot within the Great Sioux Reservation. The U.S. government promptly reneged on promises made in the Fort Laramie Treaty and insisted that Native Americans leave their lands.

Sitting Bull refused. Instead, he prepared for battle.

How Sitting Bull Took On The U.S. Army 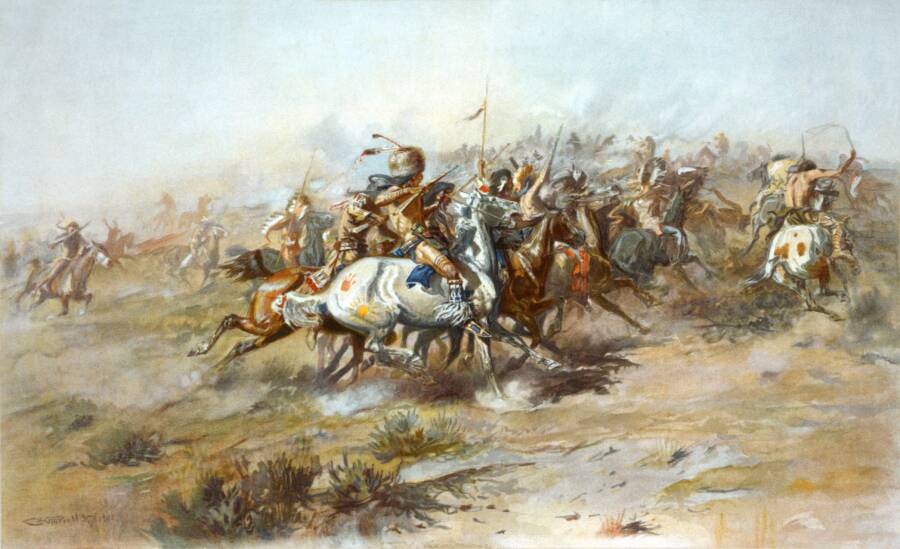 Library of CongressThe Battle of the Little Bighorn ended in a victory for Native American warriors, but enraged the U.S. government.

During this ceremony, Sitting Bull famously danced for 36 hours straight. He then made 50 sacrificial cuts on each arm. As blood ran down his limbs, he reportedly entered a trance — and had a clear vision of victory.

When he emerged, Sitting Bull announced that he’d seen U.S. soldiers plunging into a Native American camp like grasshoppers falling from the sky. In the vision, the men were upside down. Some were even losing their hats.

It was a sign, the chief declared. Soon, the Lakota people and their allies would triumph over the U.S. troops. And just weeks later, they did.

That fight, which pitted 3,000 warriors against General George Custer and his 600 troops, resulted in a key win for the Native American warriors. They killed every man on the field, including Custer. And as Sitting Bull’s warriors squared off against the U.S. troops during the bloody battle, the chief protected the tribal women and children and kept them out of harm’s way.

The Death And Legacy Of Sitting Bull 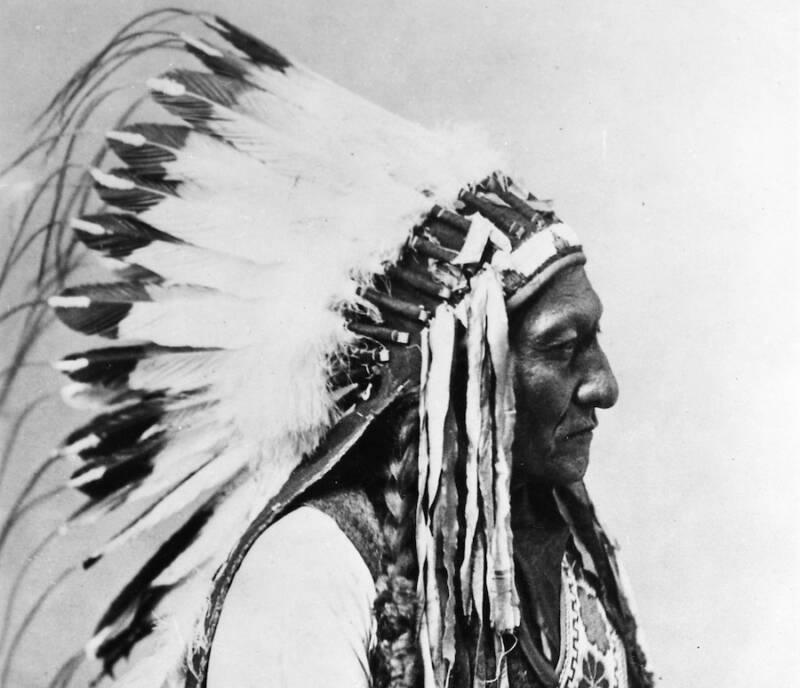 Wikimedia CommonsJust a few years before Sitting Bull died, he posed for pictures in traditional attire in 1885.

The last few decades of Sitting Bull’s life were difficult. With U.S. troops closing in on him, he moved his people to Canada in 1877 to keep them safe. He remained there in exile for about four years. But as time went on, he realized that many of his people were starving due to low food supplies.

Unwilling to see his people suffer any longer, Sitting Bull surrendered to the U.S. Army in 1881. In exchange, he received amnesty for his tribe, but he was forced to spend two years in prison at Fort Randall in South Dakota. After he served his time, he was then moved to Standing Rock Reservation.

Though the Lakota chief had long despised the idea of living on a reservation, he was sometimes allowed to travel outside the bounds of his new home. By this point, he had become a celebrity of sorts, and he was often seen more as a curiosity rather than an active threat against the U.S. government.

Still, Sitting Bull found ways to fight back against assimilation. He often wore traditional attire and continued to speak his native language, which he sometimes used to insult unwitting white Americans right to their faces.

In 1883, Sitting Bull was invited to be a guest speaker at an opening ceremony for the Northern Pacific Railroad. The chief was supposed to give a warm speech welcoming the mostly white audience. Or at least, that was the speech that his interpreter was originally given.

Instead, Sitting Bull said in his native language: “I hate all white people. You are thieves and liars. You have taken away our land and made us outcasts.” Since his translator read his approved speech and not the real one, the audience thought the chief was praising them — and burst into applause. 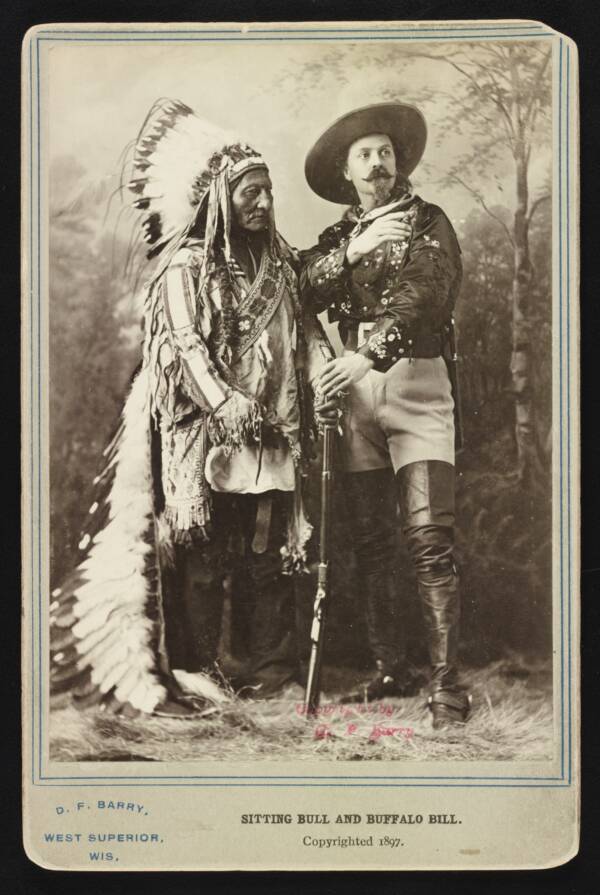 Library of CongressSitting Bull and Buffalo Bill struck up an unlikely friendship during the late 19th century.

Other than ceremonies and events, Sitting Bull also made appearances in Buffalo Bill Cody’s Wild West Show in 1885. By then, he had struck up an unlikely friendship with Buffalo Bill, despite the fact that he was a veteran of the U.S. Army. The chief had also become friends with famed sharpshooter Annie Oakley, whom he affectionately called “Little Sure Shot.”

Though Sitting Bull saw the job as an easy way to earn money — especially since many were willing to pay him extra for his autograph — he sometimes endured abuse from the crowds. He eventually returned home for good at age 54. “The wigwam is a better place for the red man,” he said.

But peace had eluded Sitting Bull for much of his life. And tragically, his death would be no different. As the Ghost Dance movement — which claimed that dead tribal members would come back to life and that all white people would disappear — swept the Standing Rock Reservation, Indian police worried that Sitting Bull would lend his support.

In the early morning hours of December 15, 1890, Indian police tried to arrest Sitting Bull over his alleged involvement in the movement, but he would not go quietly. Even though it was 6 a.m., a crowd soon gathered at the chaotic scene at the reservation. Before long, someone fired a shot at one of the officers. In response, the police shot Sitting Bull, who died instantly.

Many were devastated when they learned how Sitting Bull died at the hands of the police. Annie Oakley bitterly remarked that if Sitting Bull had been a white man, “someone would have hung for his murder.”

More than a century later, the chief’s legacy lives on. In 2021, his great-grandson Ernie LaPointe was identified through DNA. But even before the confirmation, LaPointe had made it his life’s mission to tell his ancestor’s story. Thanks to him and other Indigenous writers, Sitting Bull is still remembered as one of the most revered Native American leaders of all time.

After reading about the heroic life and death of Sitting Bull, discover the surprisingly long history of the Crazy Horse memorial. Then, learn about the U.S. government’s Native American assimilation policy.