Before linking with neo-Nazism, skinhead culture started out as an alliance between young English and Jamaican working-class communities in 1960s London. 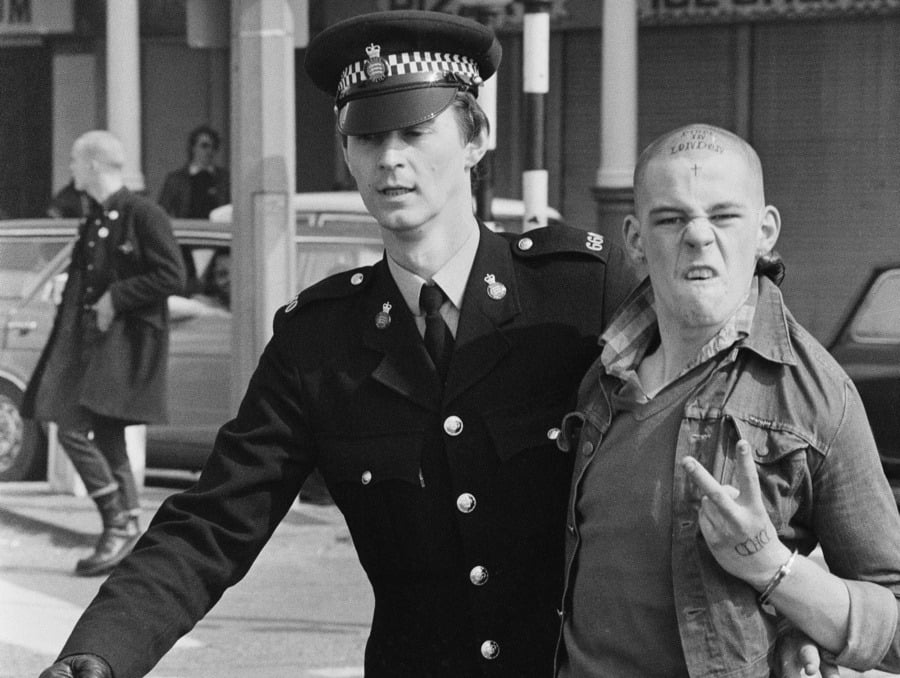 They just weren’t having it anymore. Sick of the hippie movement’s empty promises and the austerity that pervaded the British government, skinheads emerged in 1960s London and rallied around one thing: to wear their working-class status as a point of pride.

But it was only a matter of time before radical right-wing politics buried that mission in favor of neo-Nazism. In The Story of Skinhead, Don Letts — one of the original London skinheads — explores this transformation, and offers a sobering story of how easily racism can creep into working-class politics.

The First Wave Of The Skinheads 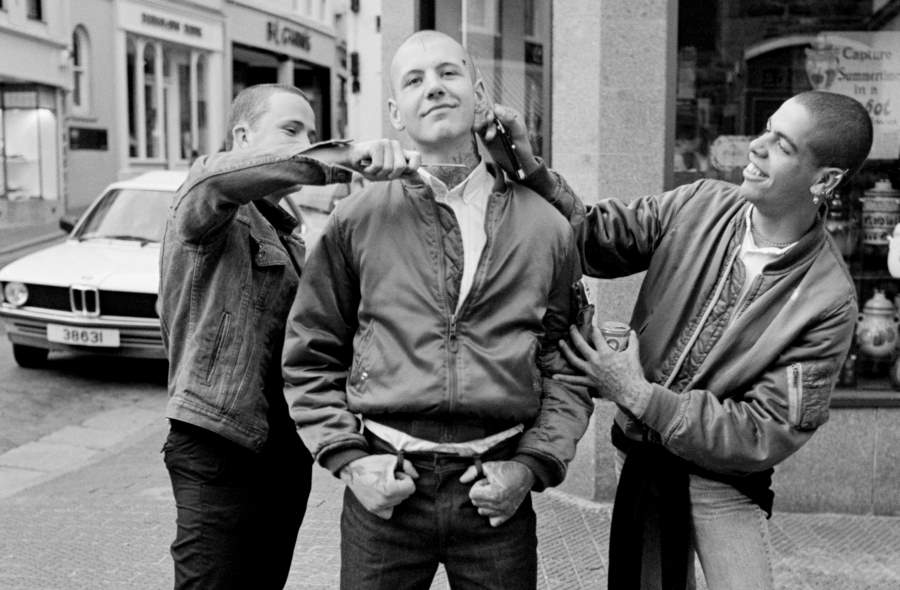 PYMCA/UIG via Getty ImagesThree skinheads messing around with knives in Guernsey. 1986.

In the 1960s, the first wave of skinheads stood for one thing: embracing their blue-collar status with a sense of pride and meaning.

Many self-identifying skinheads at the time either grew up poor in government housing projects or “uncool” in suburban row houses. They felt isolated from the hippie movement, which they felt embodied a middle-class worldview — and didn’t address their unique concerns.

Changing immigration patterns also shaped the burgeoning culture. Around that time, Jamaican immigrants began to enter the U.K., and many of them lived side-by-side with working-class white people.

This physical proximity offered a chance for sustained cultural exchange, and English kids soon latched on to Jamaican reggae and ska records.

In a nod to the mod and rocker subcultures that preceded them, skinheads donned slick coats and loafers, buzzing their hair in a quest to become cool in their own right — and to disassociate themselves from the hippies.

But in the 1970s, the word “skinhead” would take on a different meaning.

How Racism Crept Into The Skinhead Movement 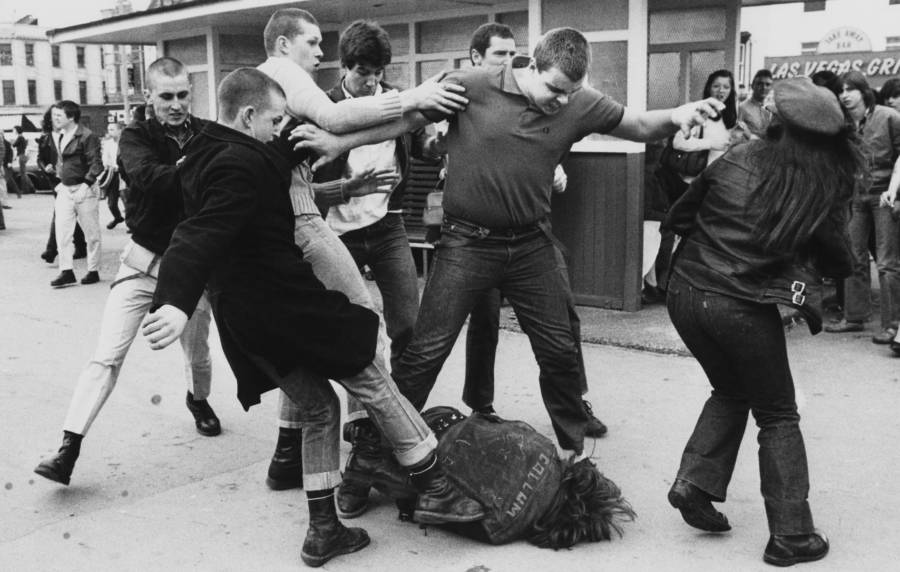 John Downing/Getty Images“A group of skinheads on the attack during a bank holiday weekend in Southend.” April 7, 1980.

By 1970, the first generation of skinheads had begun to frighten their peers. Popular media exacerbated this fear, with Richard Allen’s 1970 cult classic novel Skinhead — about a racist London skinhead obsessed with clothes, beer, soccer, and violence — serving as a prime example.

But the second wave of skinheads didn’t take umbrage at this portrayal. Instead, they embraced it, especially the racist aspects. Indeed, Skinhead became the de facto bible for skinheads outside London, where football fan clubs were quick to take up the subculture — and its aesthetics.

It didn’t take long for political groups to use the growing subculture for their own gain. The far-right National Front Party saw in the skinheads a group of working-class males whose economic hardships may have made them sympathetic to the party’s ethno-nationalist politics. 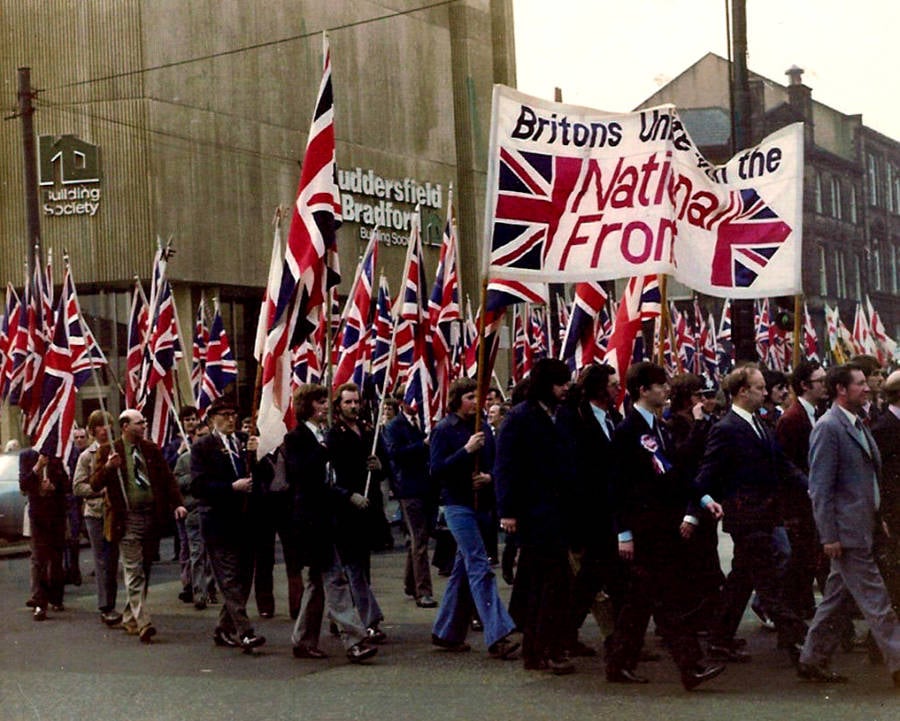 And thus, the party began to infiltrate the group. “We were trying to think about race wars,” said Joseph Pearce, a repentant former National Front member who wrote propaganda for the group throughout the 1980s, in The Story of Skinhead. “Our job was to basically disrupt the multicultural society, the multi-racial society, and make it unworkable.”

The National Front Party would sell propagandistic magazines at football games, where they knew they would reach a massive audience. It was an economical move on their part: Even if only one in 10 attendees bought a magazine, that would still be 600 to 700 potential recruits.

In its efforts to recruit more party members, the party also took advantage of the fact that many skinheads lived in rural areas. One former skinhead recalled that the National Front opened up the sole nightclub within dozens of miles of one rural community — and only allowed members inside. Anyone who wanted to dance had to listen to propaganda.

Escalating Violence And The State Of The Subculture Today 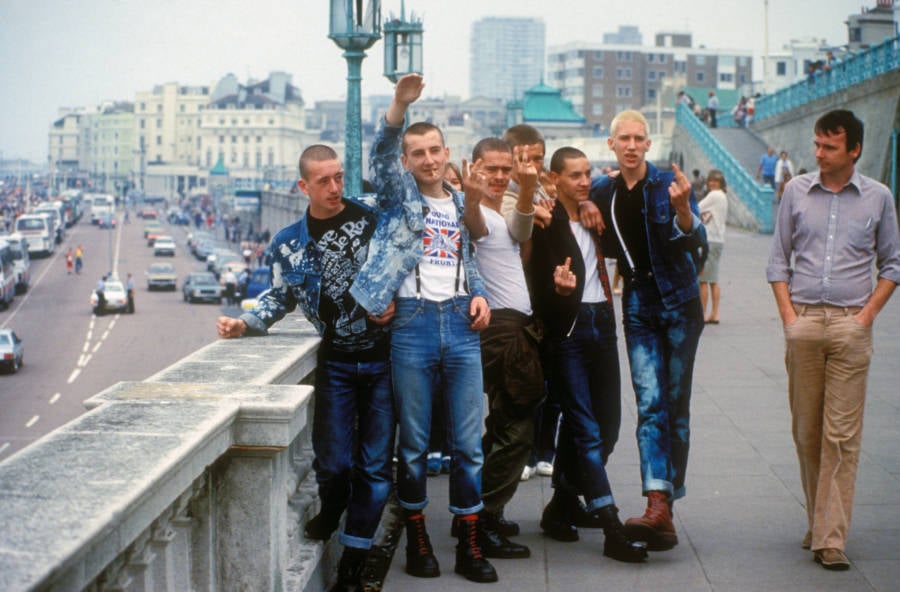 PYMCA/UIG via Getty ImagesSkinheads gesturing while a pedestrian strolls past in Brighton. Circa 1980s.

Over time, the National Front Party’s efforts to co-opt skinhead culture began to rot the latter from within. For example, Sham 69, one of the most successful punk bands in the 1970s (and one with an unusually large skinhead following), stopped performing altogether after National Front-supporting skinheads started a riot at a 1979 concert.

Barry “Bmore” George, a former skinhead who was forced out due to the quickly changing meaning of the movement, put it this way:

“I got asked a lot by people, about like well, you seem to know a bit about skinheads, I thought they were all racists… Depends on where you start reading your story. If you go right back and start your story right back at the beginning, and get yourself a good foundation of your knowledge of skinhead culture and where it was born from…You know what it was about. You can see where it was distorted. It did start off as one thing; now it’s branched to mean untold things.”

The late 1970s also saw the last flare of multicultural acceptance among skinheads with 2 Tone music, which blended 1960s-style ska with punk rock. As that genre petered out, Oi! music picked up speed. Oi! was known for combining the working-class skinhead ethos with punk rock energy.

Right-wing nationalists co-opted this genre from nearly the very beginning. Strength Thru Oi!, a famous compilation album of Oi! music, was (supposedly mistakenly) modeled after a Nazi slogan. The album also featured an infamous neo-Nazi on the cover — who would be convicted of attacking Black youths at a train station that same year.

When that man was released from prison four years later, he would go on to provide security for a band called Skrewdriver. While Skrewdriver started off as a non-political Oi! band, over time it would grow close with various radical right-wing political groups and eventually become one of the most influential neo-Nazi rock bands in the world. 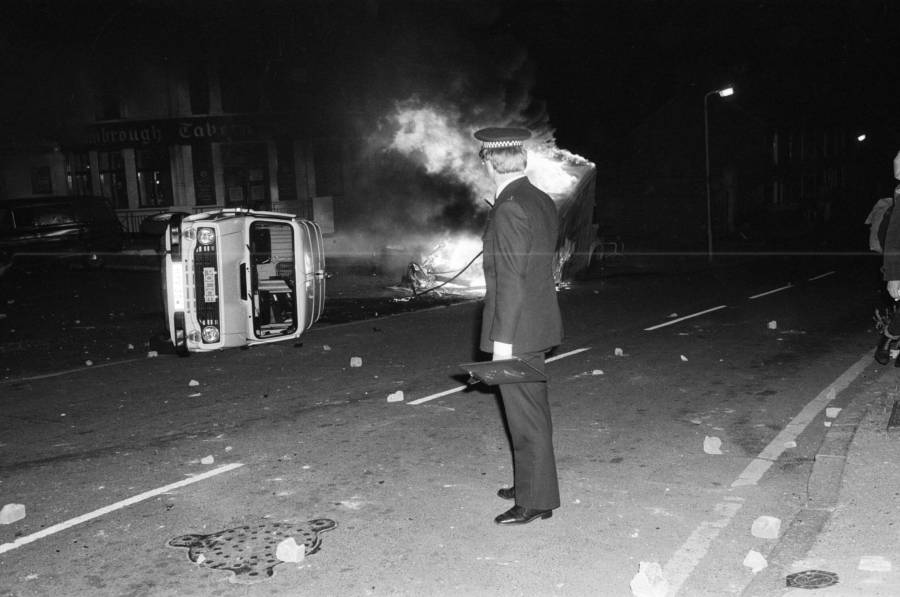 Peter Case/Mirrorpix/Getty ImagesA policeman surveys the damage after the Southall riot on July 3, 1981.

Music and violence became enmeshed, perhaps most saliently seen in the 1981 Southall riot. On the day it transpired, two busloads of skinheads headed to a concert located in Southall, a London suburb that was home to a large Indian and Pakistani population at the time.

Those skinheads found an Asian woman on the way to the concert and kicked her head in, smashing windows and vandalizing businesses as they went. One 80-year-old retiree told The New York Times that the skinheads were “running up and down asking where the Indians lived.”

Outraged, Indians and Pakistanis followed the skinheads to the pub where the concert took place. An all-out brawl took place soon after.

“The skinheads were wearing National Front gear, swastikas everywhere, and National Front written on their jackets,” a spokesman for the Southall Youth Association told The New York Times. “They sheltered behind the police barricades and threw stones at the crowd. Instead of arresting them, the police just pushed them back. It’s not surprising people started to retaliate.”

The Southall incident solidified the perception of skinheads as an openly racist and violent subculture. And around the same time, the first American skinheads began to emerge in Texas and the Midwest. Donning shaved heads, bomber jackets, and swastika tattoos, these gangs soon became known for their hatred of Jews, Black people, and the LGBTQ community.

Ever since then, skinhead gangs have been responsible for horrific violence across America, much like the infamous Southall riot in London. And the subsequent generations of the subculture — particularly those in U.S. prisons — have worked to ensure that the associations stick. As for the working-class ethos that propelled the subculture in the first place?

Its progenitors don’t think there’s any chance of getting that narrative back.

“Those ideologies have been sold to people that skinhead is associated with [fascism].” Jimmy Pursey, the lead singer of Sham 69, said. “It’s like a branding.”

After learning about the surprising origins of skinheads, read up on George Lincoln Rockwell, the founder of the American Nazi Party. Then, discover the appalling history of Holocaust deniers.