The Sossusvlei is an ancient salt pan in Namibia's Namib Desert that transforms into an oasis once or twice every decade. 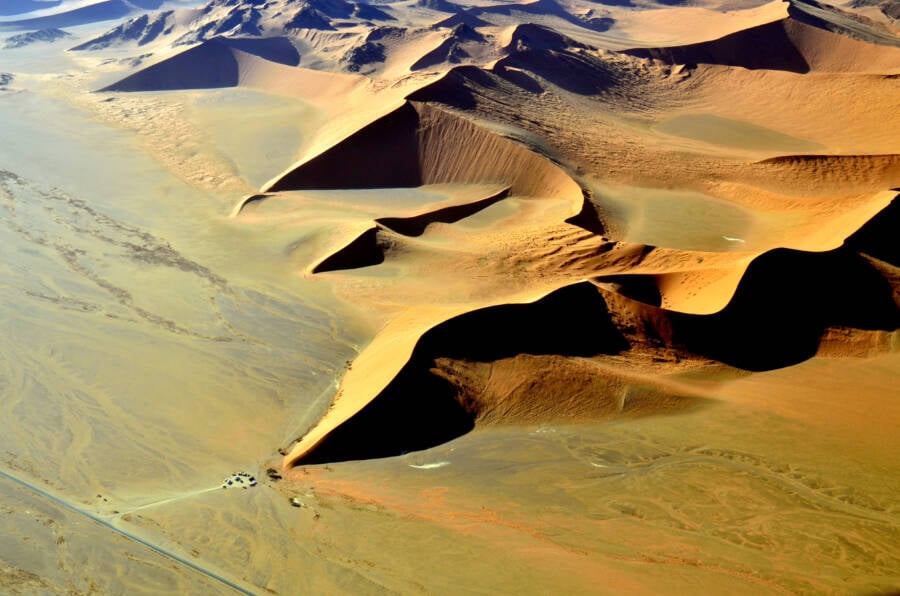 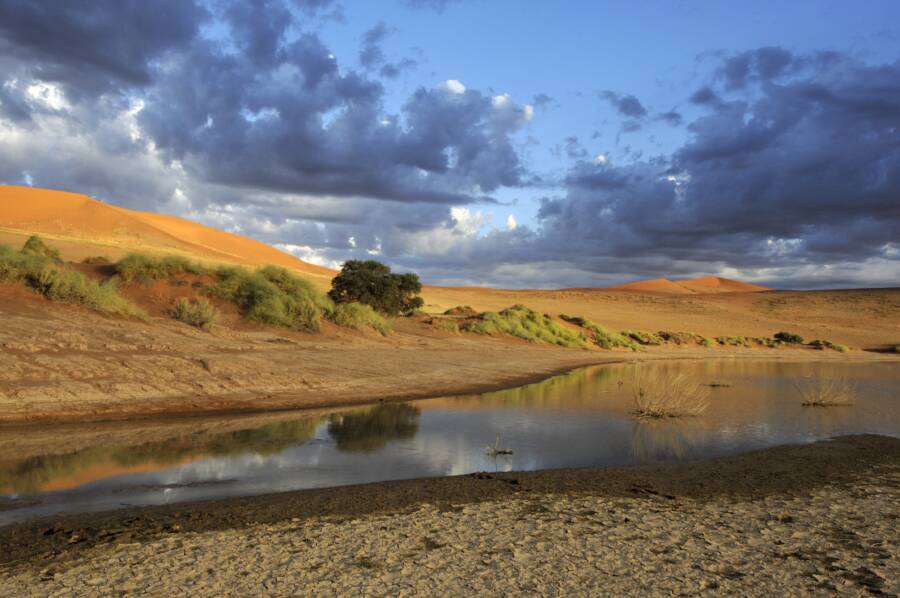 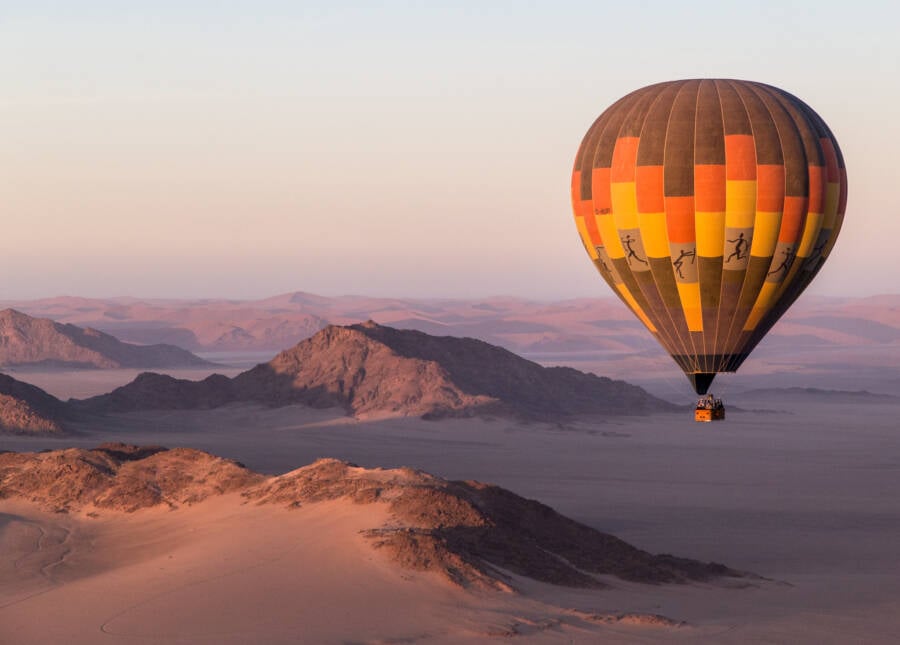 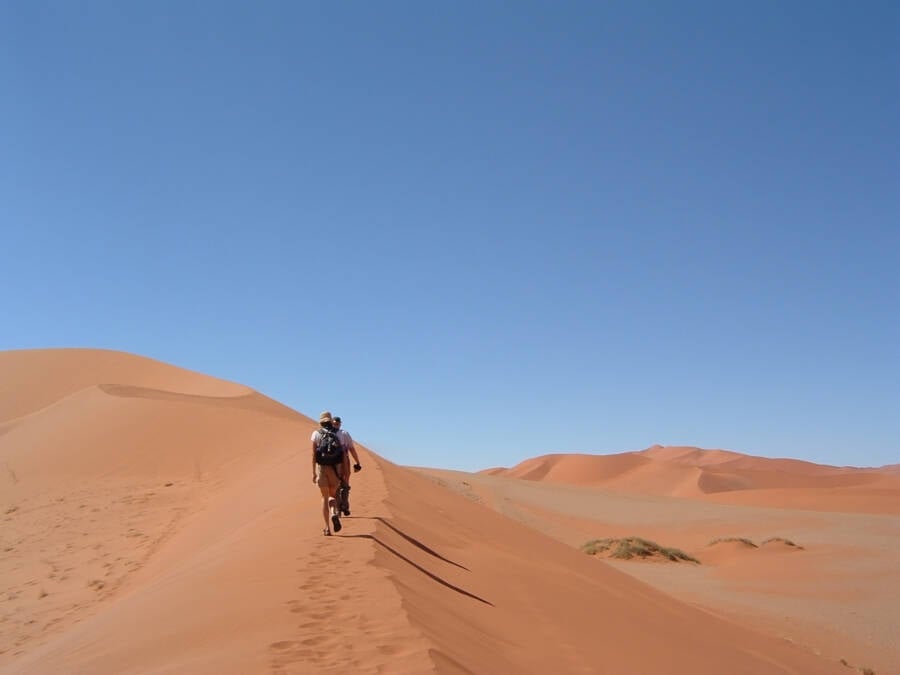 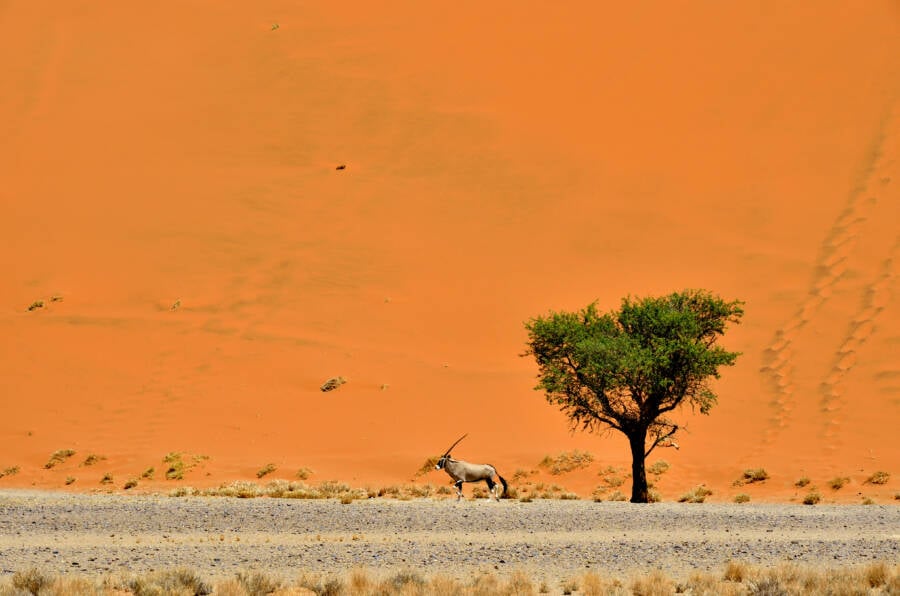 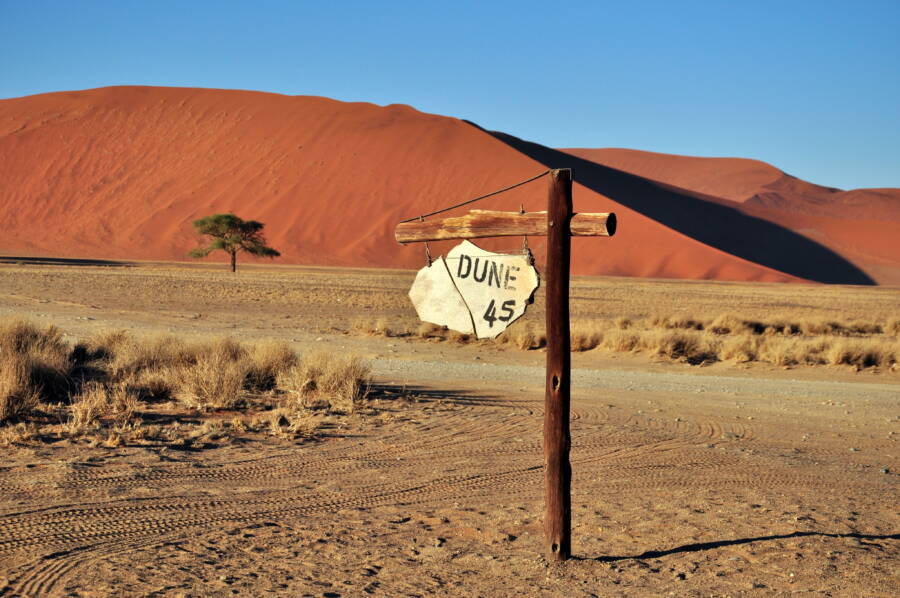 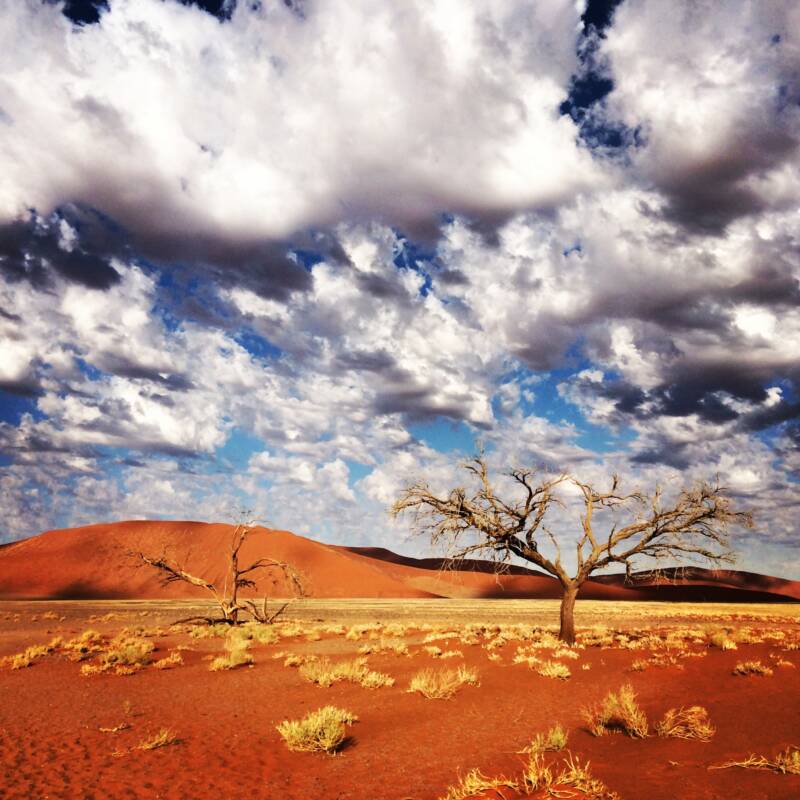 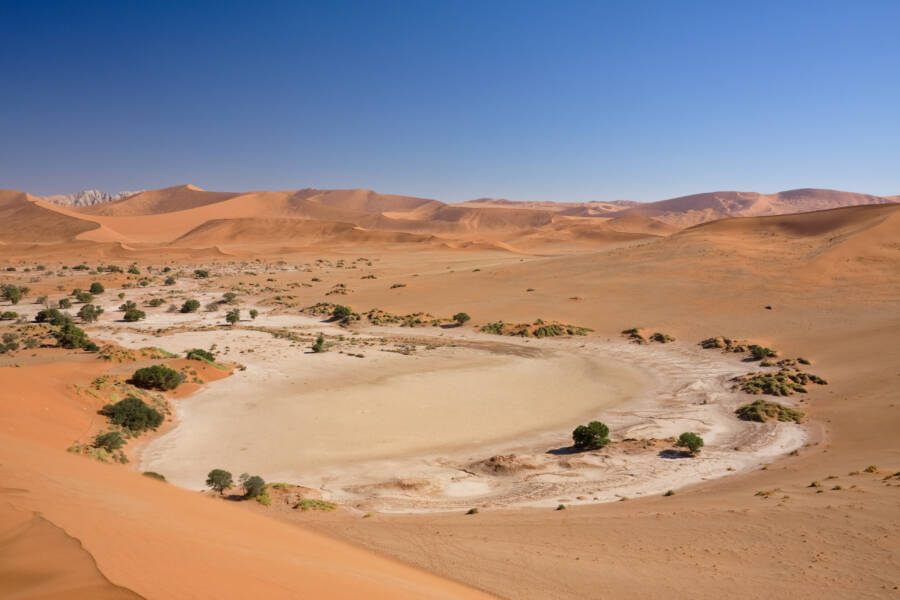 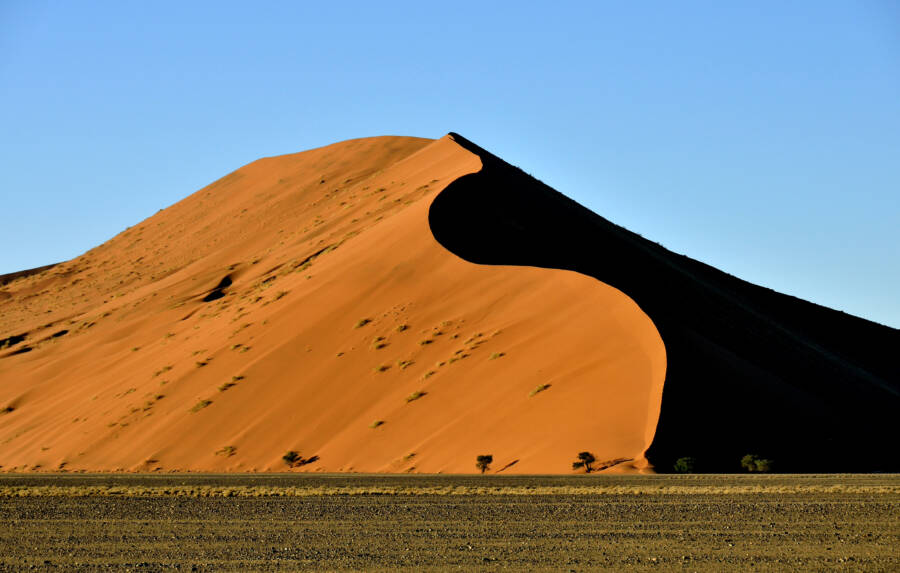 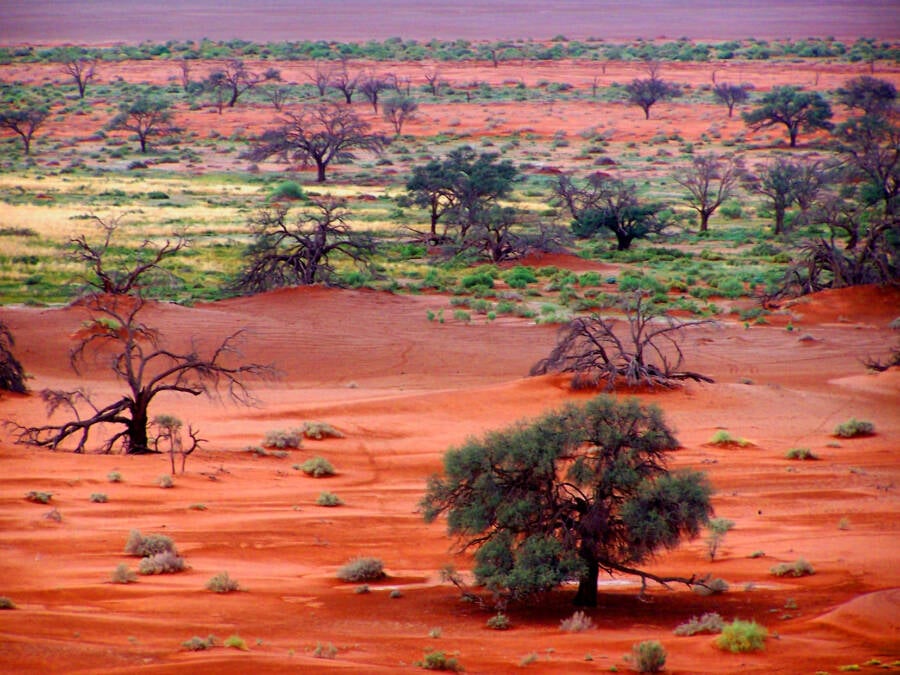 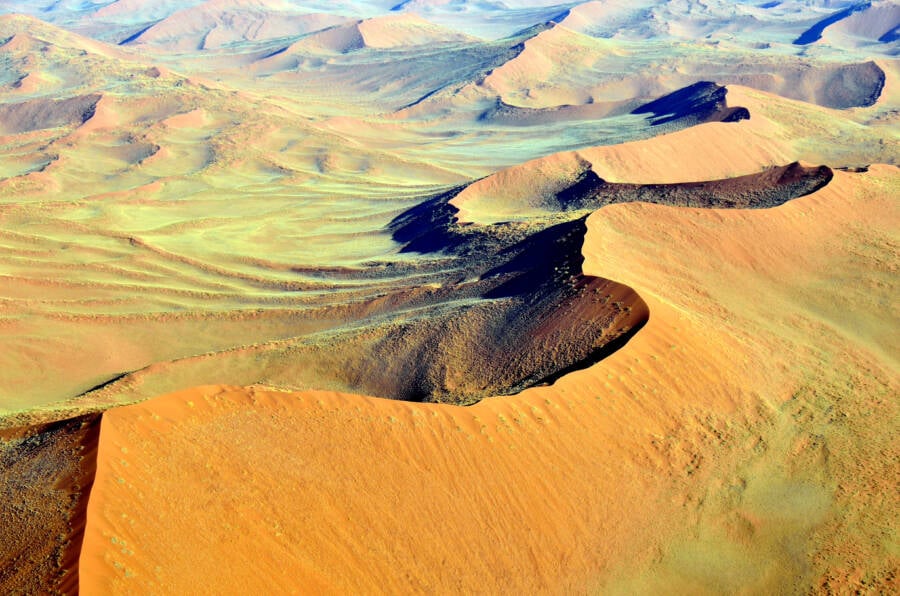 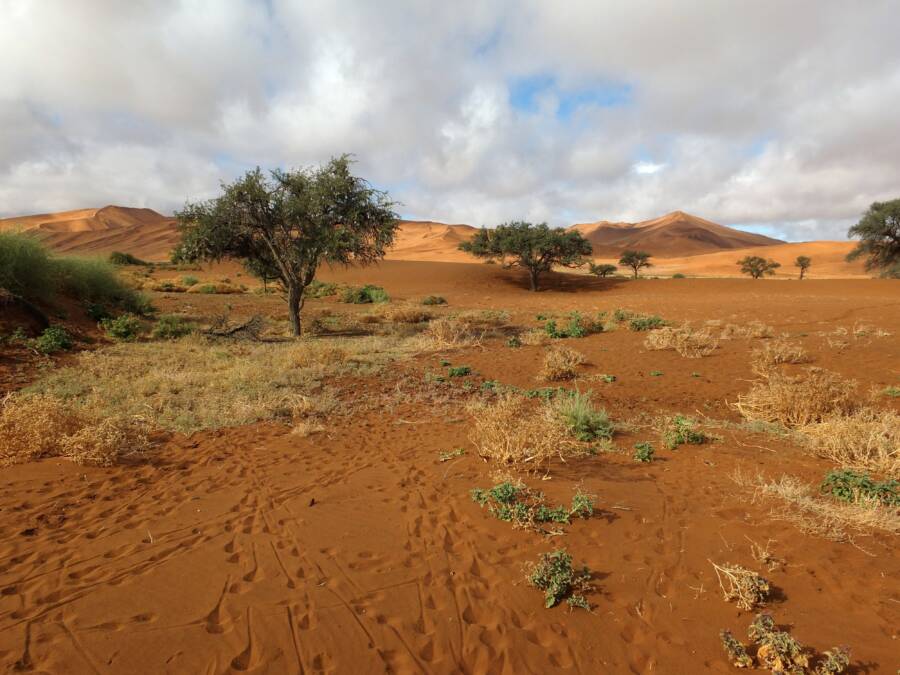 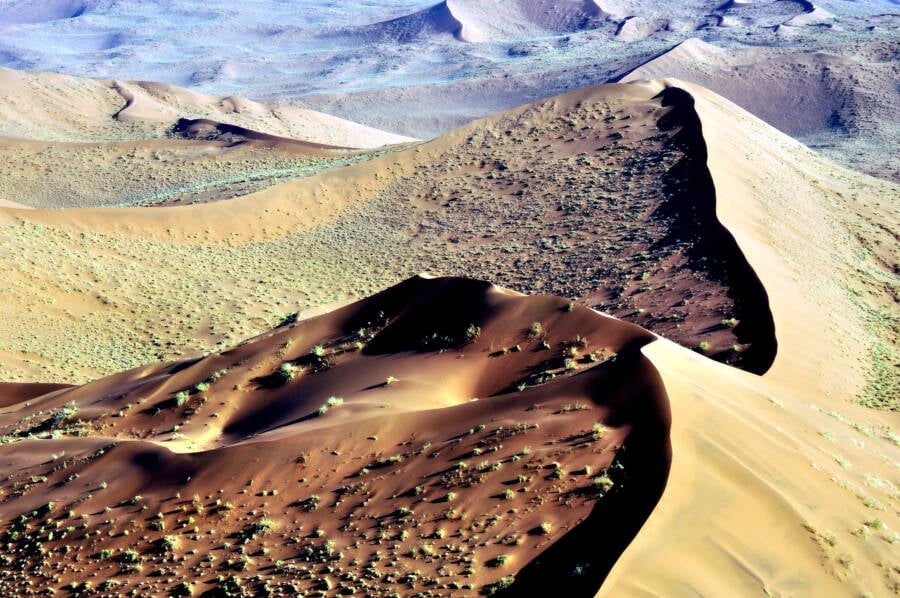 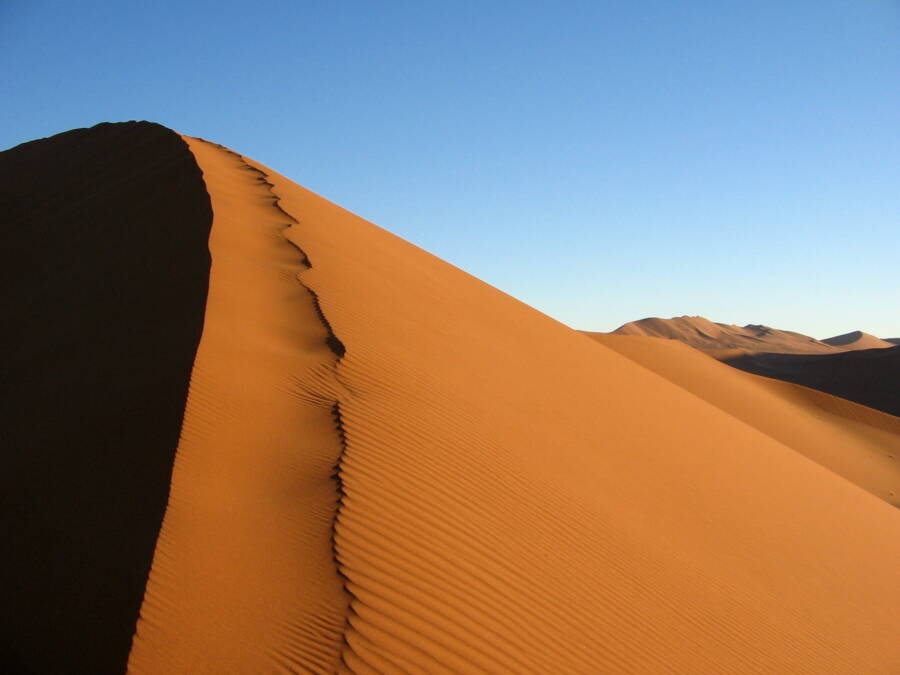 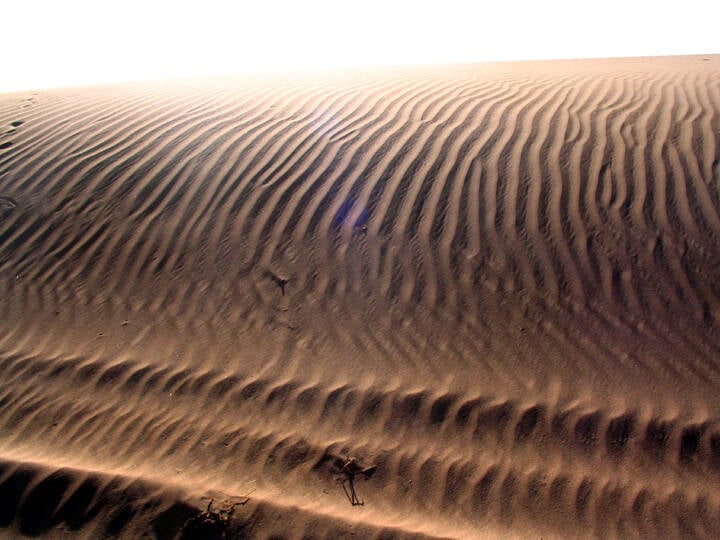 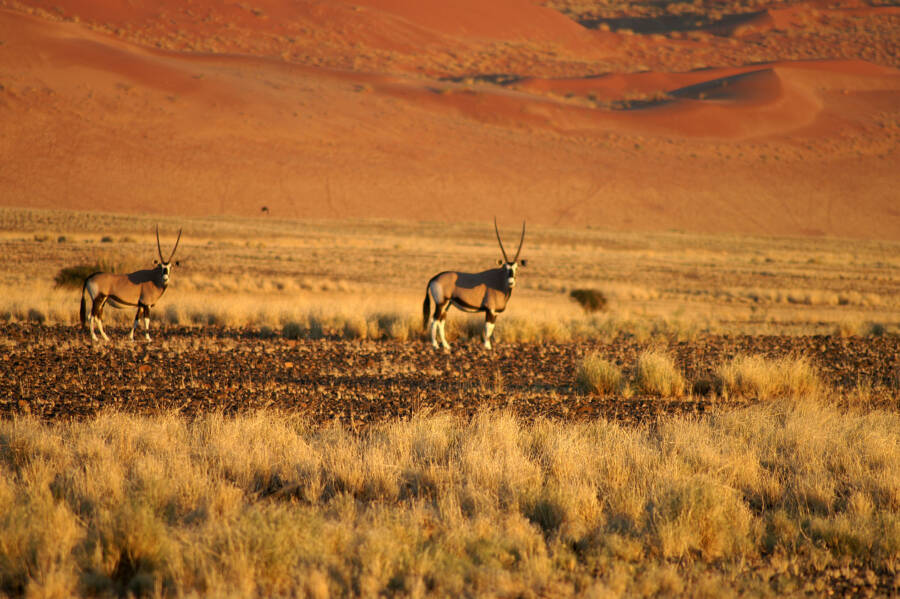 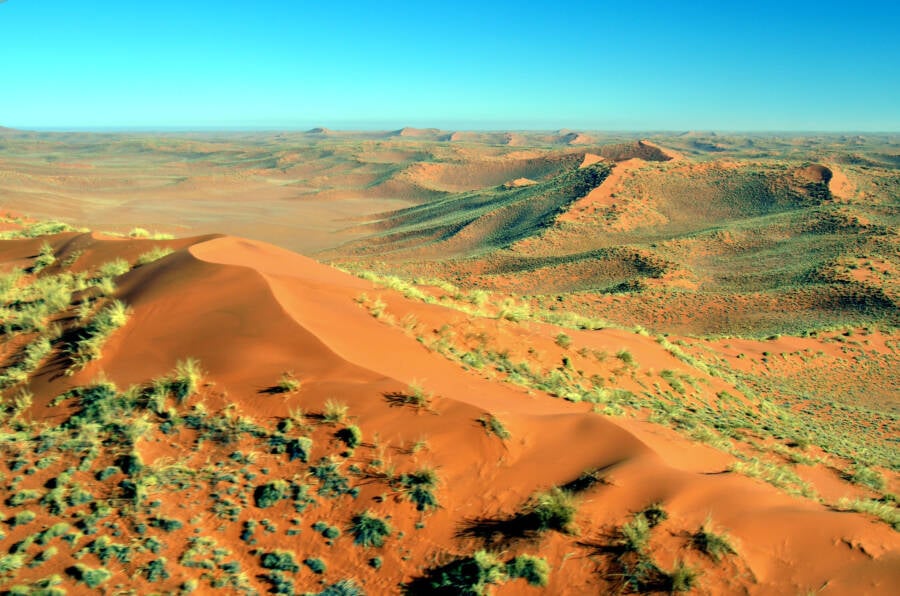 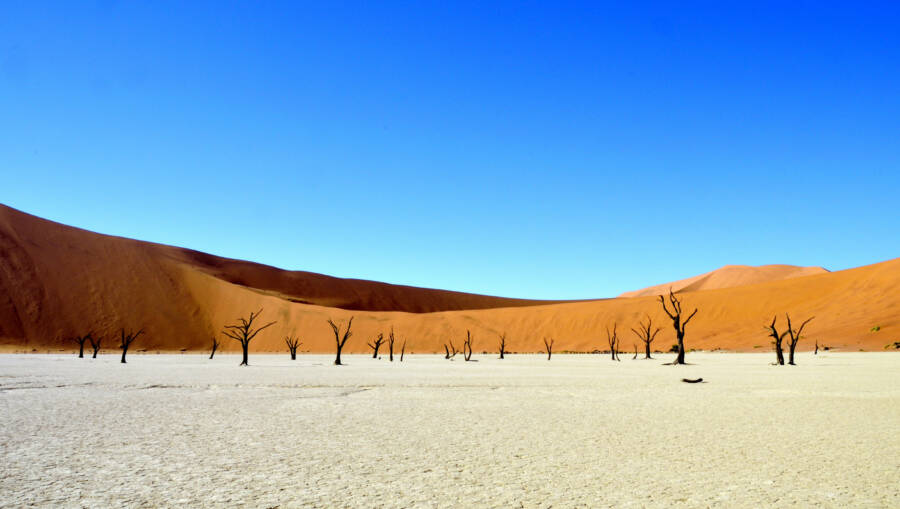 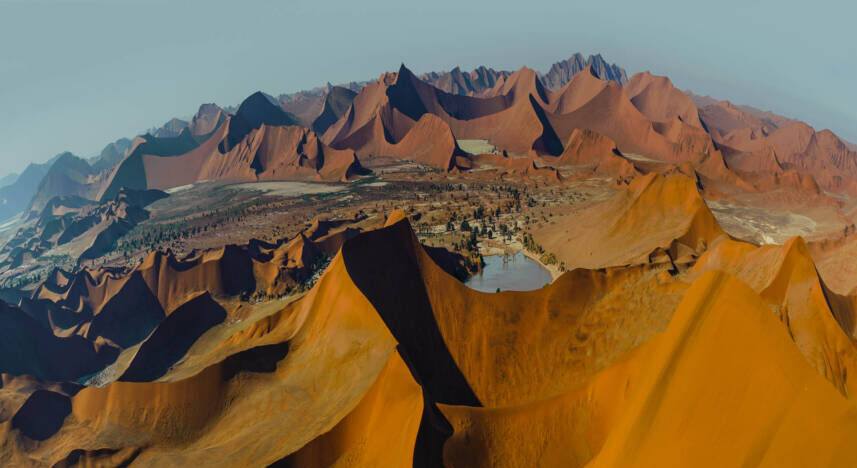 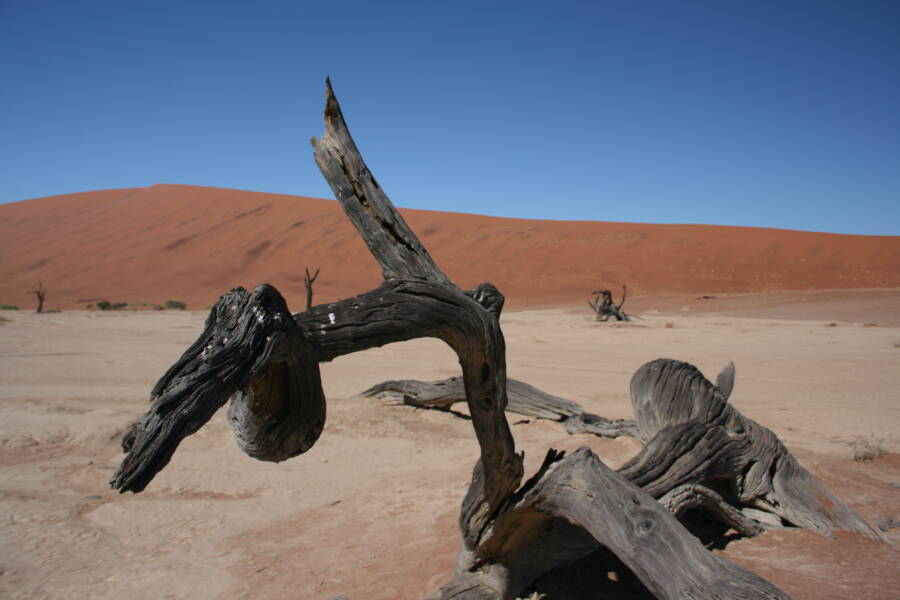 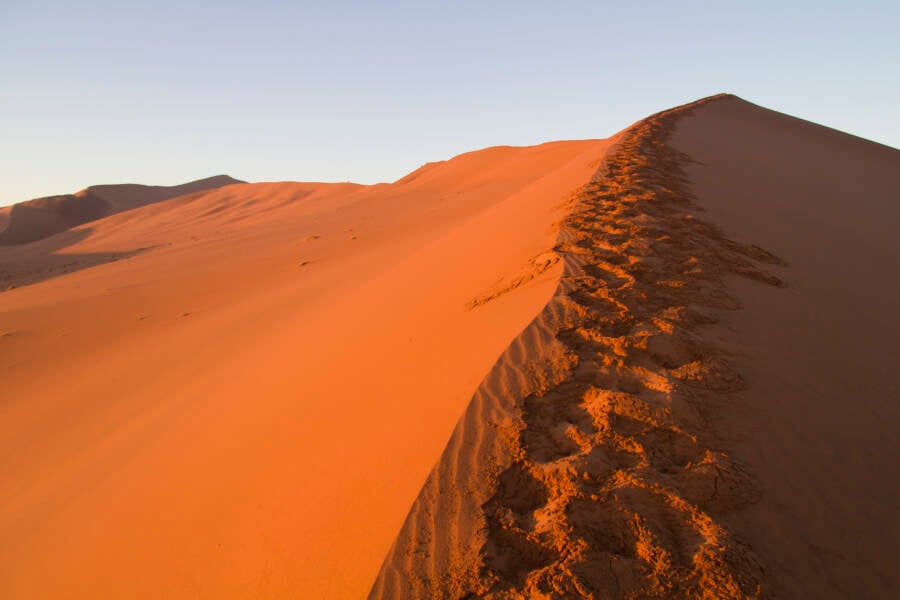 1 of 24
Yathin S Krishnappa/Wikimedia Commons
2 of 24
erix-pix/Flickr
3 of 24
The Sossusvlei overflows with runoff from the Tsauchab River every five to 10 years and becomes an oasis. Hans Stieglitz/Wikimedia Commons
4 of 24
The highest dunes in the Namib Desert and that surround the Sossusvlei are among the tallest in the world at about 1,300 feet.prasenberg/Flickr
5 of 24
eclogite/Flickr
6 of 24
Animals that thrive in this treacherous environment have adapted special abilities, like the antelope-esque Oryx, which can cool the blood that flows to its brain.erix-pix/Flickr
7 of 24
erix-pix/Flickr
8 of 24
In the nearby stretch of land known as Deadvlei, or Dead Vlei, the heat is so intense and the air so bereft of water that not even dead foliage can decompose — it simply scorches black from the sun.brianholsclaw/Flickr
9 of 24
Ikiwaner/Wikimedia Commons
10 of 24
The dunes in the Namib Desert are red with rust.erix-pix/Flickr
11 of 24
geoftheref/Flickr
12 of 24
erix-pix/Flickr
13 of 24
hobgadlng/Flickr
14 of 24
The desert is also the oldest in the world at 55 million years.erix-pix/Flickr
15 of 24
julien-carnot/Flickr
16 of 24
When the Soussusvlei basin fills with water, the clay and salt earth becomes putty and is known as "the point of no return" because of this.caitlinator/Flickr
17 of 24
hb1248/Flickr
18 of 24
Some dunes are spotted with foliage as a number of riverbeds run just beneath the surface of this otherwise arid landscape.erix-pix/Flickr
19 of 24
erix-pix/Flickr
20 of 24
The area is often shrouded in fog that meanders in from the Atlantic Ocean.paulgodard/Flickr
21 of 24
lawmurray/Flickr
22 of 24
The desert does host creatures year-round, like small geckos and beetles, which drink droplets of fog in order to survive.bruchez/Flickr
23 of 24
lukeprice88/Flickr
24 of 24 Inside Namibia's Namib-Naukluft National Park sprawl massive dunes that glow orange, pink, and red under the burning sun. These magnificent hills are made of sand so old that it has literally rusted over its millions of years on Earth, and in between them lies an alien desert of white salt known as the Sossusvlei.

"Sossuvlei" — which translates to "Dead Marshes" from Afrikaans — is cupped by sand dunes that tower over 1,300 feet tall and are among the highest sandhills in the world. The Sossusvlei basin, along with its similar counterpart known as the Deadvlei, is among the most photographed areas of Sub-Saharan Africa.

The Sossuvlei Is Made Of Ancient Rust 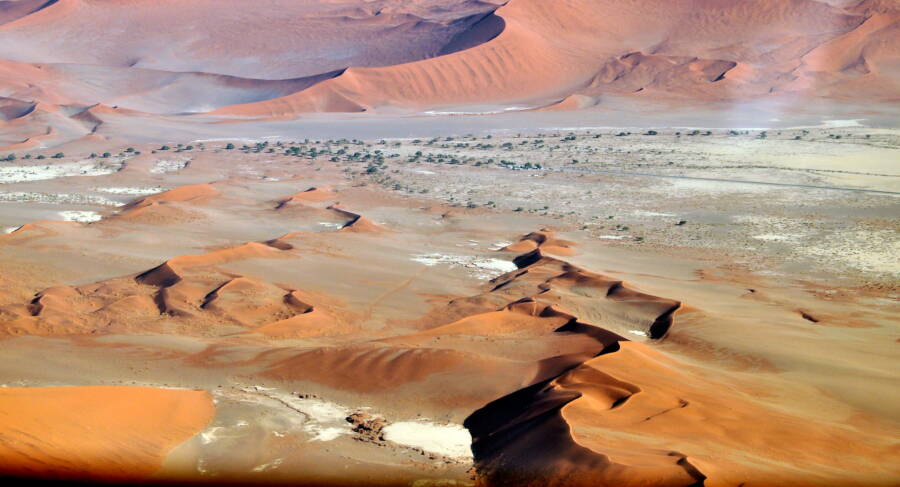 erix-pix/FlickrThe Namibian desert is a wonder of various geographic forms, including the salt flats of the Sossusvlei and the surrounding rusted sandhills.

The Sossusvlei is a natural wonder comprised of salt that contains a layer of clay in its subsoil. It remains a dry basin, except for once every five to ten years when it finds itself overflowing with water from the nearby Tsauchab River.

When filled with water, the clay subsoil in the Sossusvlei becomes sticky and plasticized like putty, giving the basin its nickname: the "point of no return."

Visitors from all over the world come to witness the sight when the Tsauchab fills the flat as glassy reflections from the resulting lake make for excellent photography. During this time, the cracked mud basin transforms into an oasis with a blue-green lake, sprouting foliage, and aquatic birdlife.

The basin can hold water for up to a full year before it is re-absorbed by the land. Small animals that can survive with very little moisture live near Sossusvlei including some arthropods, small reptiles, and rodents.

The more stable dunes in the salt basin are somewhat covered with vegetation year-round, as they are watered mainly by several underground rivers, and are thus able to sustain these little critters. The highest dune in the Sossusvlei area proper is called "Big Daddy," and it stands 1,066 feet tall. "Big Daddy" faces another massive dune that is known, of course, as "Big Mama."

The dystopic landscape has made appearances in many movies, and nearly every story or article written about the country of Namibia features a photo of it. In the film The Cell, the desert landscape represents a dream-like virtual reality. It's also featured in the movies The Fall and Steel Dawn.

In The Nearby Deadvlei, Not Even The Dead Can Disappear 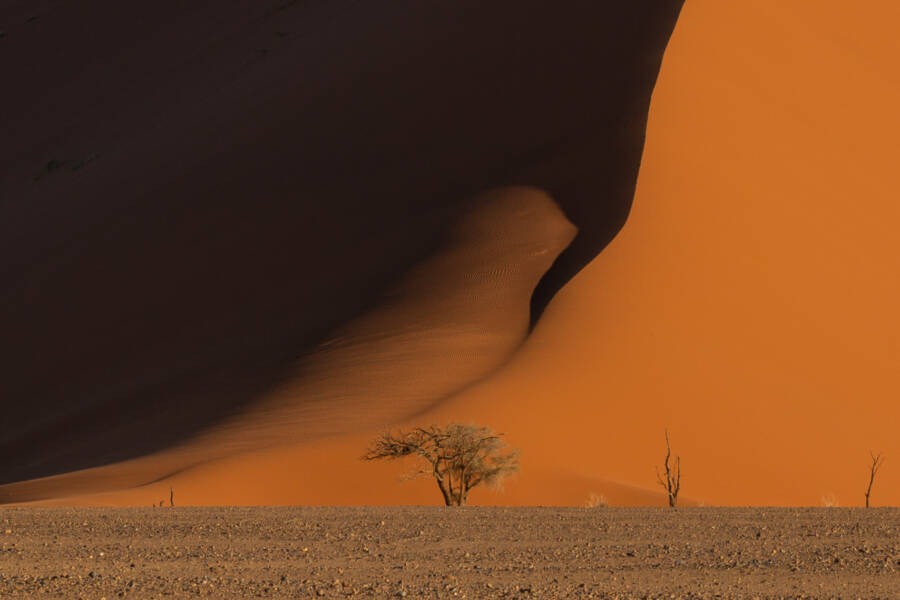 djmccrady/FlickrIn the Deadvlei, the environment is so dry that not even the dead can decompose.

But there is another more treacherous "point of no return."

Nearby the Sossusvlei sprawls a second "dead marsh" known as the Deadvlei, which is even more desolate than its neighbor. Here, the dunes block any access that the Tsauchab River may have once originally had to the basin and is thus so dry and arid that even dead trees cannot decompose — they simply scorch black under the sun.

You may think this environment wouldn't be too friendly to flora or fauna. However, there are pockets of life even within the Deadvlei. The landscape is dotted with salsola shrubs, which are part of the saltbush family, and Acanthosicyos horridus, an unusual melon that is actually native to the Namib desert. These organisms manage to sustain themselves on occasional morning mists that blow in from the Atlantic Ocean.

The desert is also populated by the Oryx, a creature similar to an antelope. These creatures can conserve water and withstand extreme heat that would prove fatal to many other animals by cooling the blood that flows to its brain.

Africa's apex predator, the desert lions of Namibia, may also be found wandering the Sossusvlei basin, as well as another drought-adapted animal known as the rare desert-dwelling elephant.

The Namib Desert Is The Oldest On Earth

An HD tour of the breathtaking landscape.

The Namib-Naukluft National Park, in which the desert resides, takes up around 8,880 square miles of land and protects areas of ecological importance. This park also shares a boundary with the NamibRand Nature Reserve; a private reserve protecting and conserving the ecology and wildlife of the region. It is one of the oldest reserves in Namibia.

The Namib Desert itself, meanwhile, has existed for around 55 million years.

If you're looking to visit Sossusvlei, mountain passes provide excellent viewpoints. On the other hand, some of the passes are harder to travel, so you'll also need a vehicle equipped to drive through sand.

Accommodations can be found inside the park, and you can book scenic flights over the dunes. Hot air balloon tours depart from the nearby settlement of Sesriem every morning.

It's a 44-mile trek from the Namib-Naukluft Park gates to Sossusvlei and Deadvlei, and a bucket-list worthy experience is witnessing the sunrise or sunset over the desert dunes. The skies here are said to be among the clearest you'll ever see.

Next, find out how a new African ocean reserve in Gabon will protect sea turtles, dolphins, and whales. Then, for those with an iron stomach, read about the brutal South African punishment known as necklacing, which was reserved for traitors to the anti-apartheid movement.