Though Lake Natron is known for its life-ending properties, it's actually quite hospitable to some lucky species.

You may remember the eerie black and white photographs of calcified birds that went viral a couple years ago. The poor creatures appeared to have “turned to stone” in the highly caustic waters of Tanzania’s Lake Natron — specifically due to the high amounts of sodium carbonate in the lake.

This mineral deposit makes its way into the lake via Ol Doinyo Lengai, a nearby volcano and the sole active producer of natrocarbonatite lava. This volcanic by-product is rich in sodium and potassium carbonate, which seeps into the lake and contributes to the water’s pH level.

But Lake Natron is not a dark pool of death or despair. In fact, the lake and surrounding area teem with life: 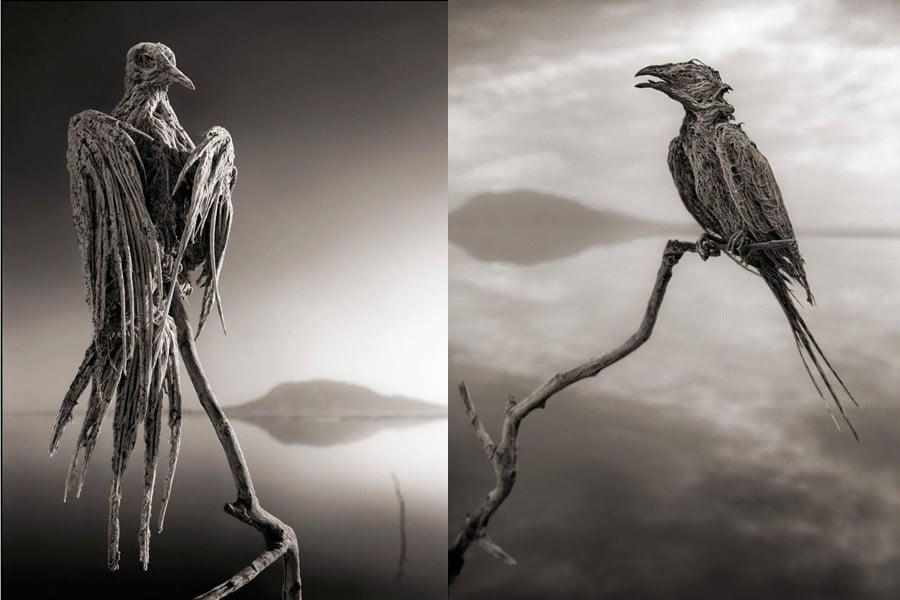 Remembering the viral photos of Lake Natron, photographer Nick Brandt says, "I found the creatures — all manner of birds and bats — washed up along the shoreline of Lake Natron in Northern Tanzania, during dry season when the water had receded."Nick Brandt/Facebook 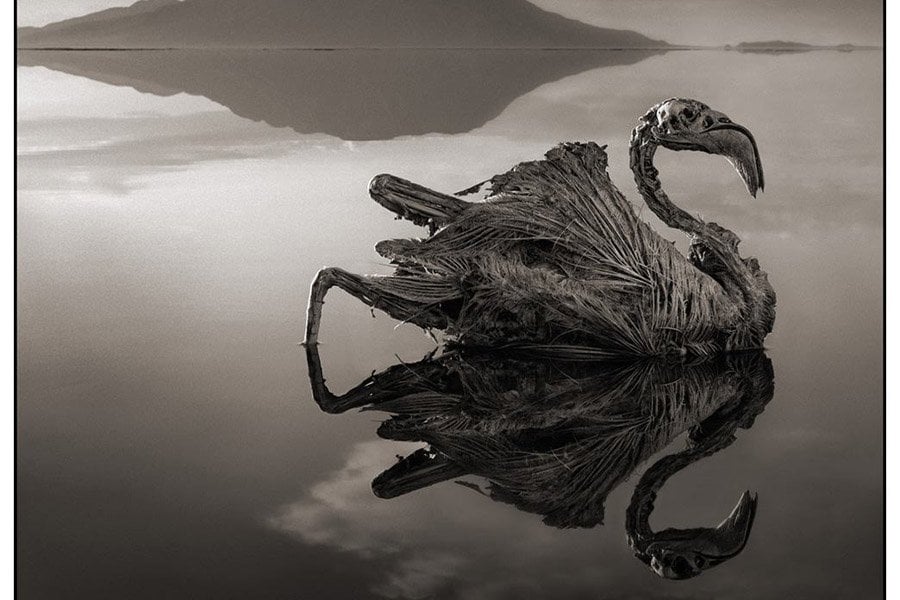 "No one knows for certain exactly how they die," Brandt says, "but it appears that the extreme reflective nature of the lake’s surface confuses them, causing them to crash into the lake."Nick Brandt/Facebook 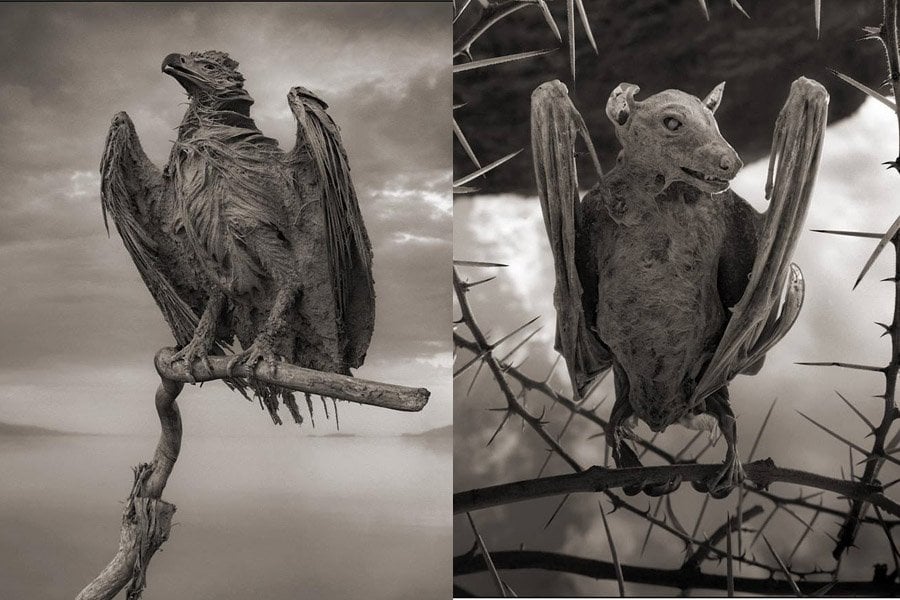 "The soda and salt content of the lake, the most caustic in the world, causes the creatures to calcify, perfectly preserved, as they dry on the shoreline."Nick Brandt/Facebook 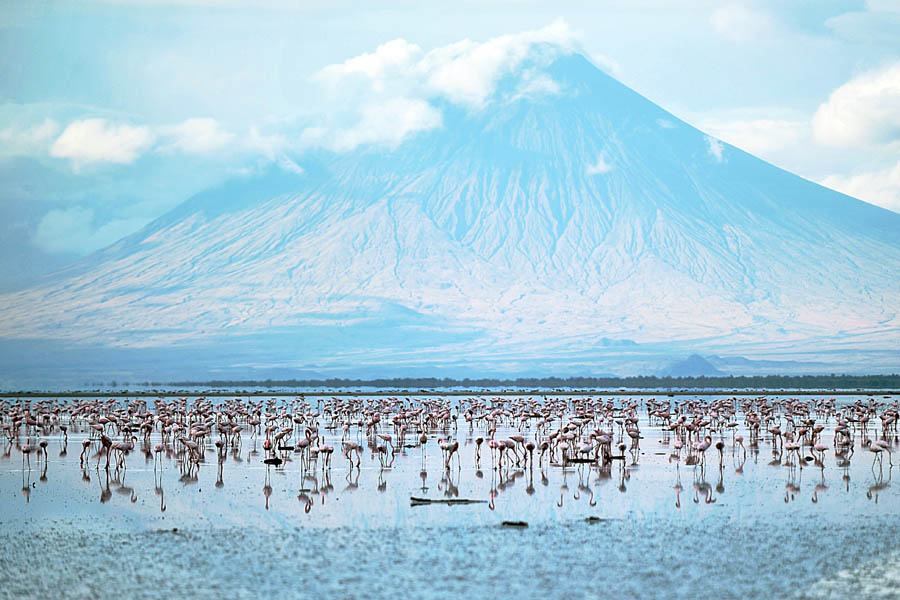 But Lake Natron is also home to lesser flamingos, who use the salty water to their advantage. TONY KARUMBA/AFP/Getty Images 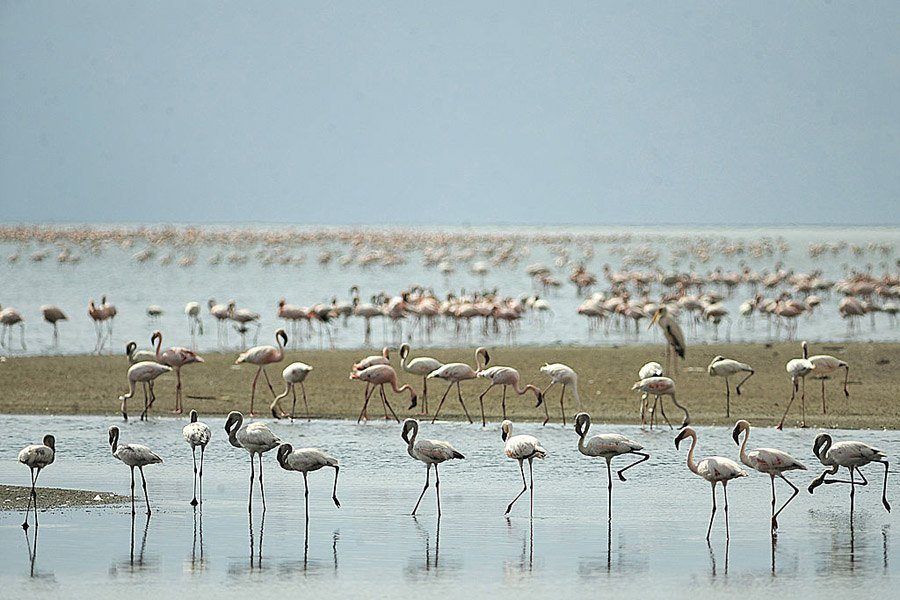 Flamingos stand in large numbers amid the water.TONY KARUMBA/AFP/Getty Images 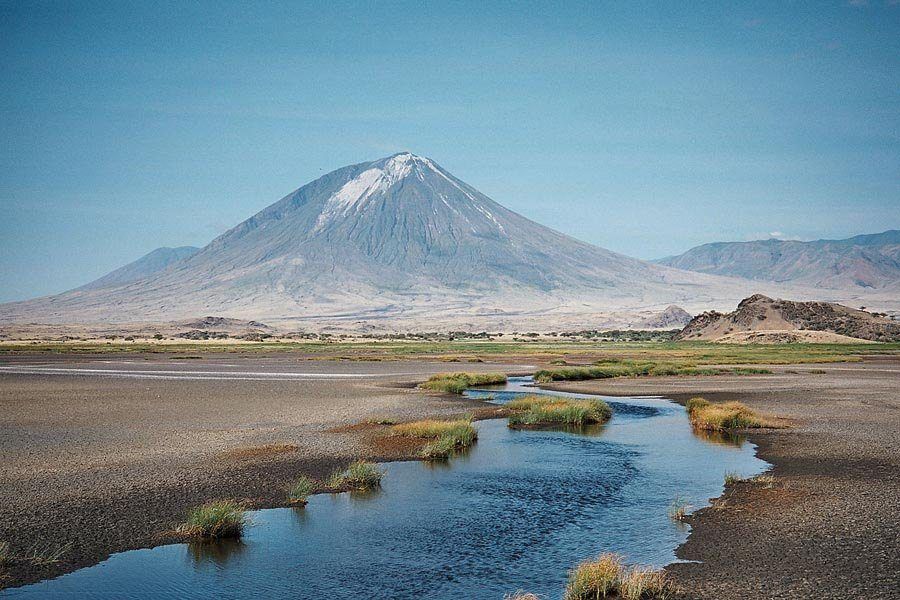 The Ol Doinyo Lengai volcano looms in the horizon.Clem23/Wikimedia Commons 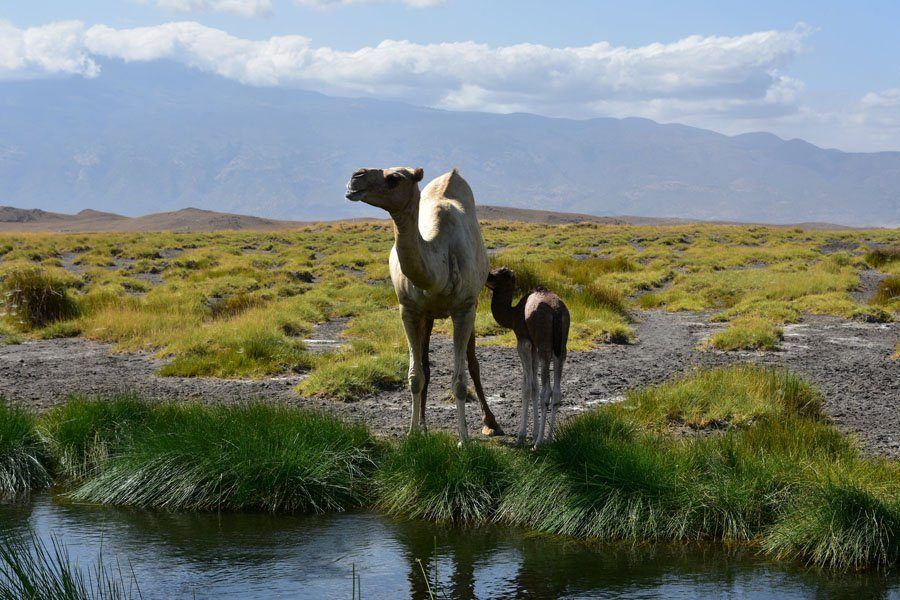 Camels drink near the lake, and enjoy the lush pastures. Richard Mortel/Flickr

The Tanzanian government is planning to build a plant in order to mine the soda ash located here, which will put the wildlife of Lake Natron at risk. Clem23/Wikimedia Commons 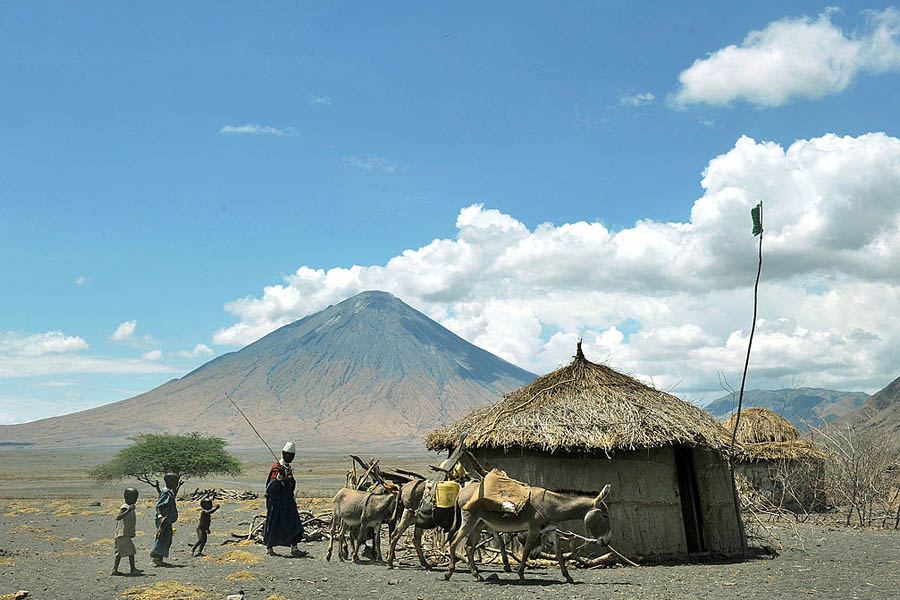 A man walks with donkeys in a Maasai village at the foot of the volcano. TONY KARUMBA/AFP/Getty Images 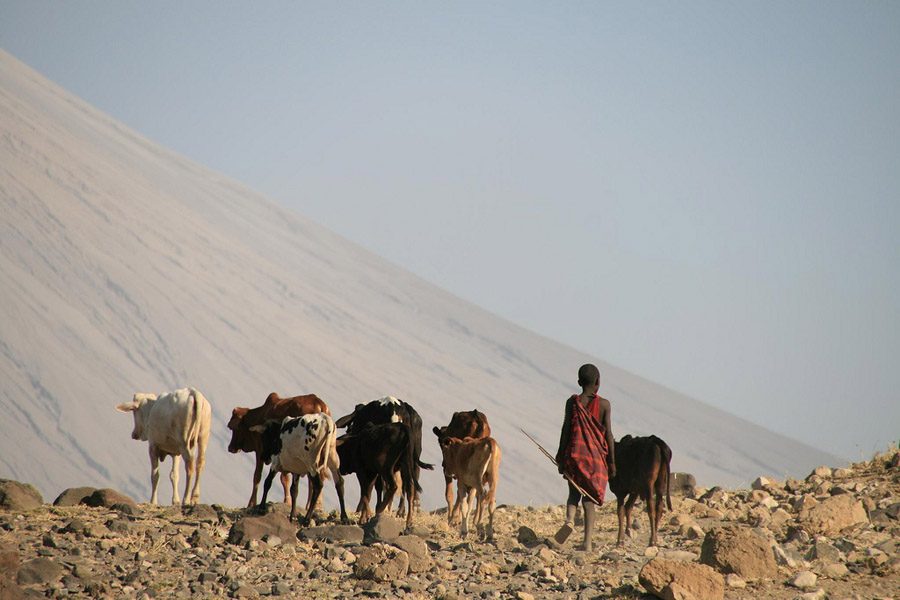 A native child watches over a small herd of cows. The people that call this area home rely on tourism dollars to live. Marc Veraart/Flickr 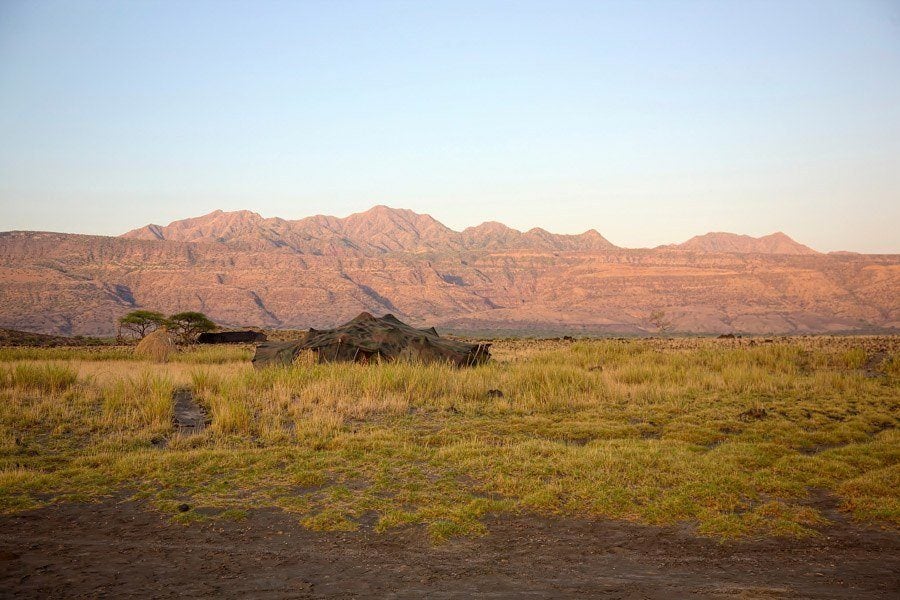 A campsite near the Maasai village by Lake Natron.Keepersfarm/Flickr 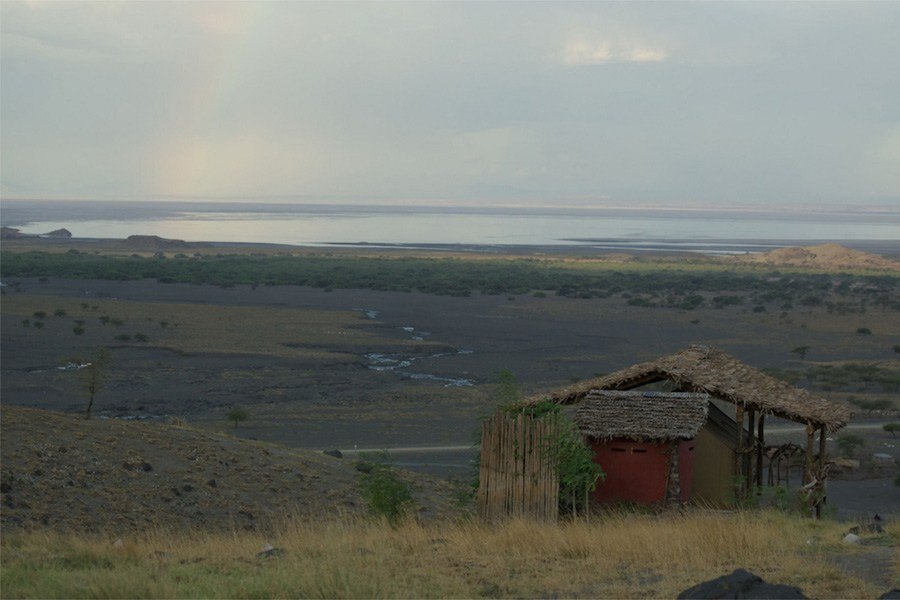 A rudimentary shelter near the village. Ken Clifton/Flickr 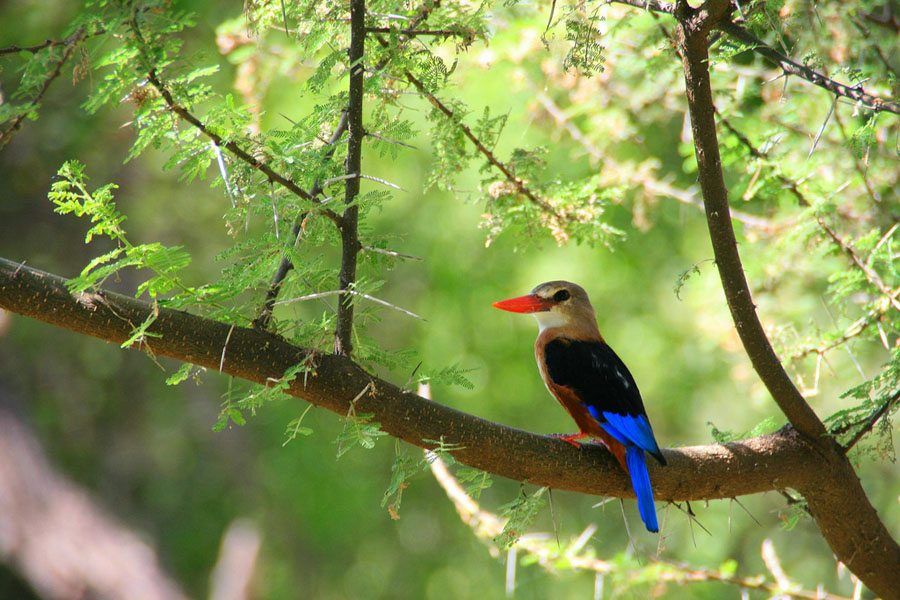 A colorful bird at rest around the freshwater wetlands.Marc Veraart/Flickr 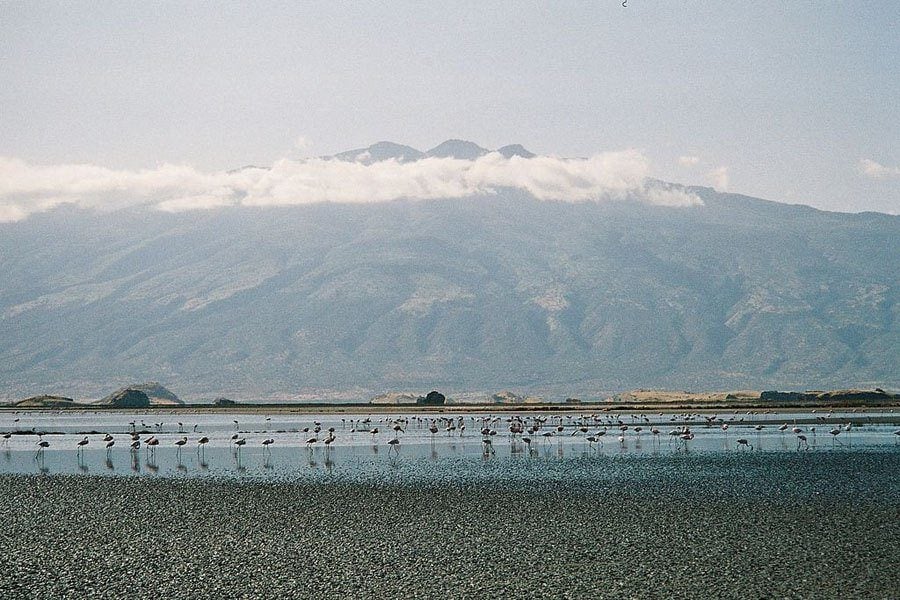 Fog surrounds the peaks of the volcano, whose molten lava is so low in temperature it appears black in sunlight.Ken Clifton/Wikimedia Commons 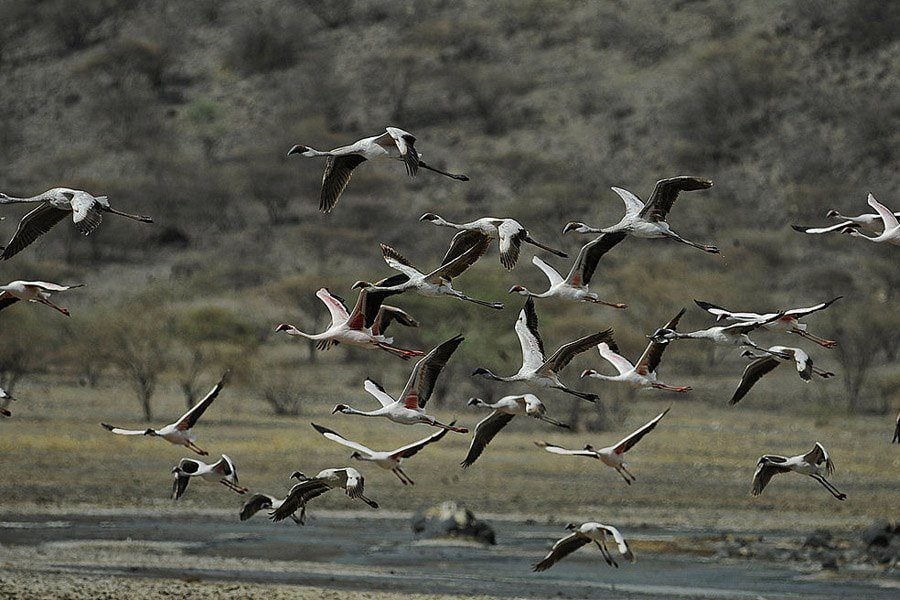 A flock of lesser flamingos takes flight from the lake.TONY KARUMBA/AFP/Getty Images 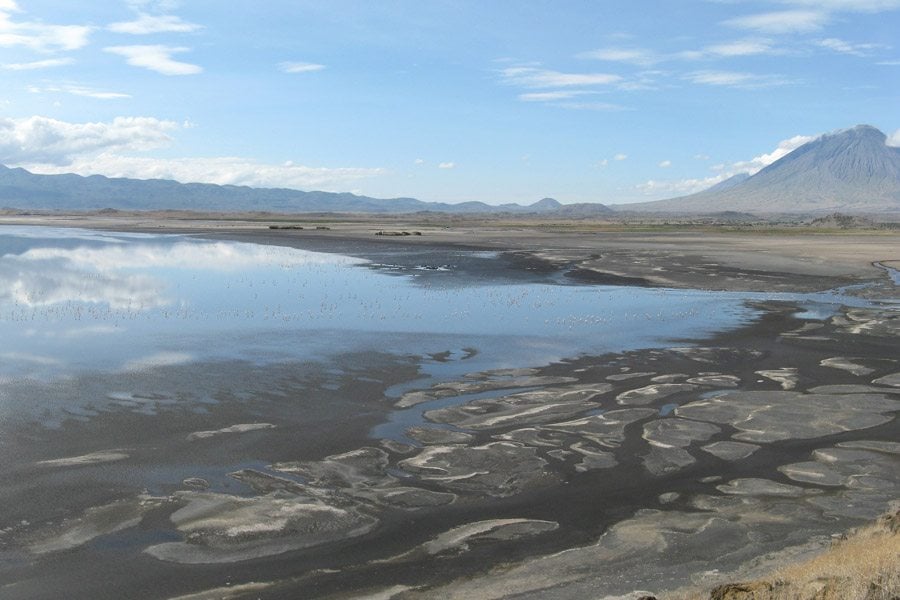 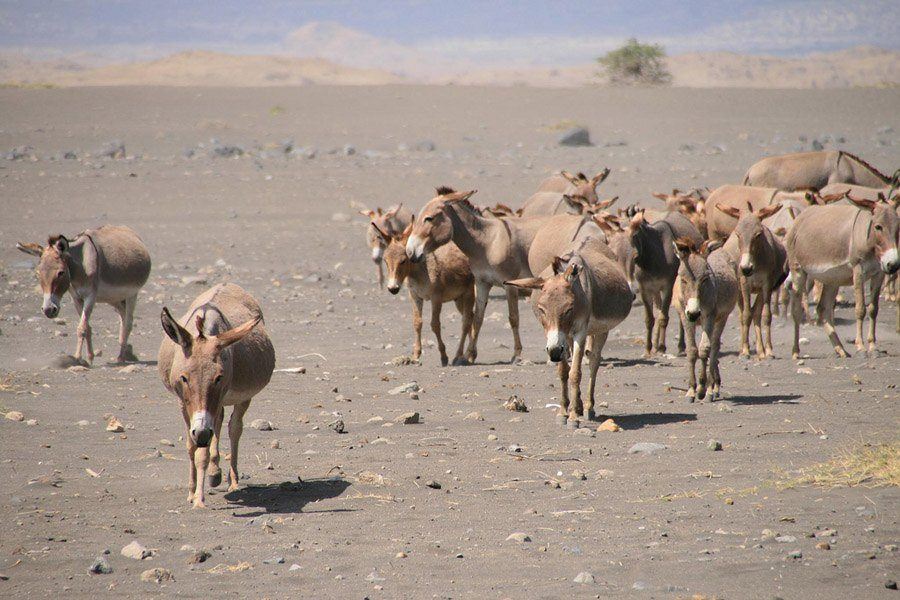 The area directly around the lake is uninhabited, but the surrounding areas see herds of various animals passing through. Tancredi/Flickr 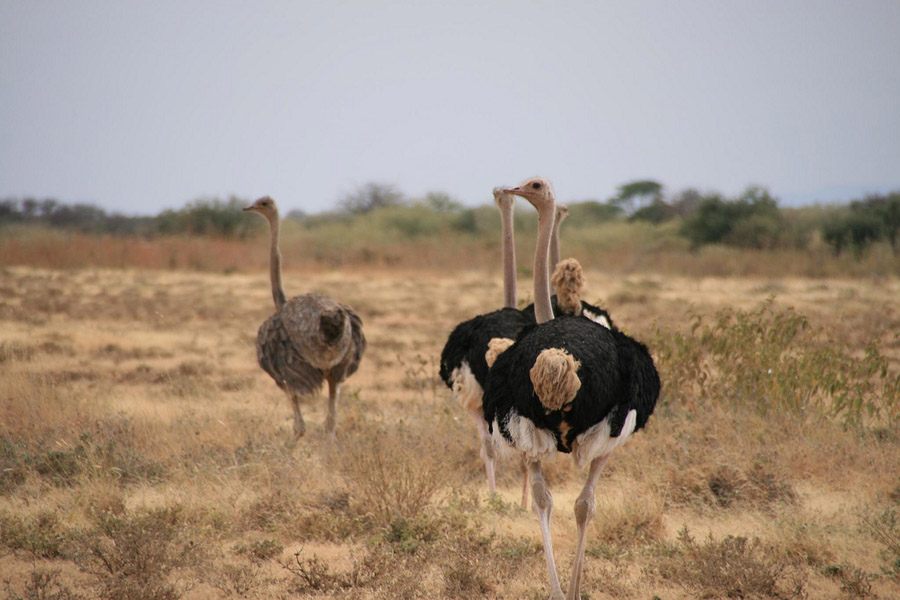 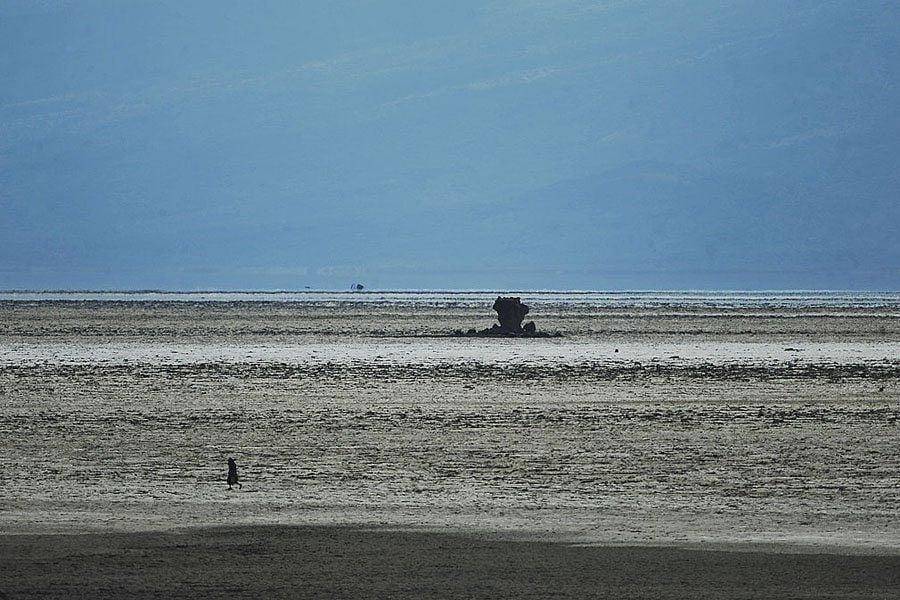 A man walking on salt flats on the shores of Lake Natron.TONY KARUMBA/AFP/Getty Images 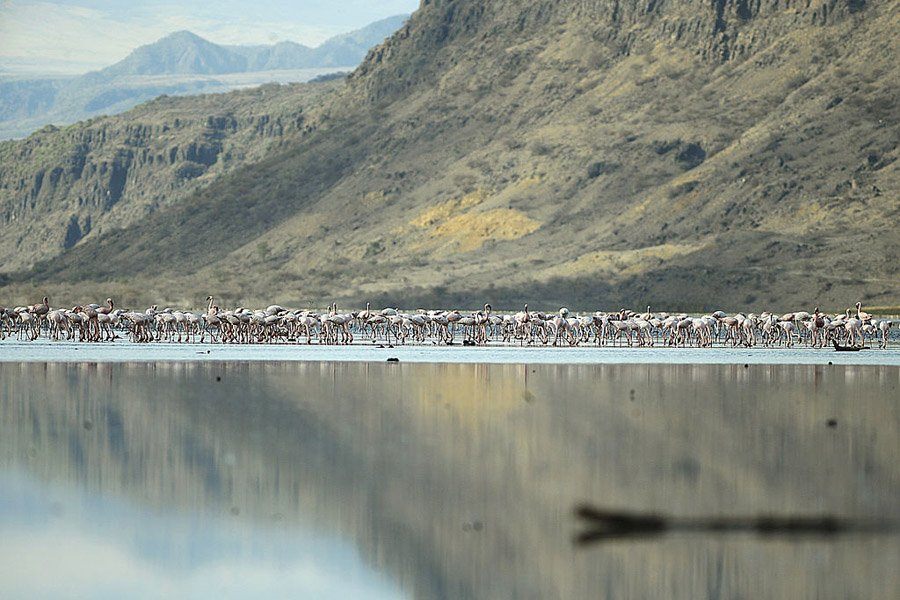 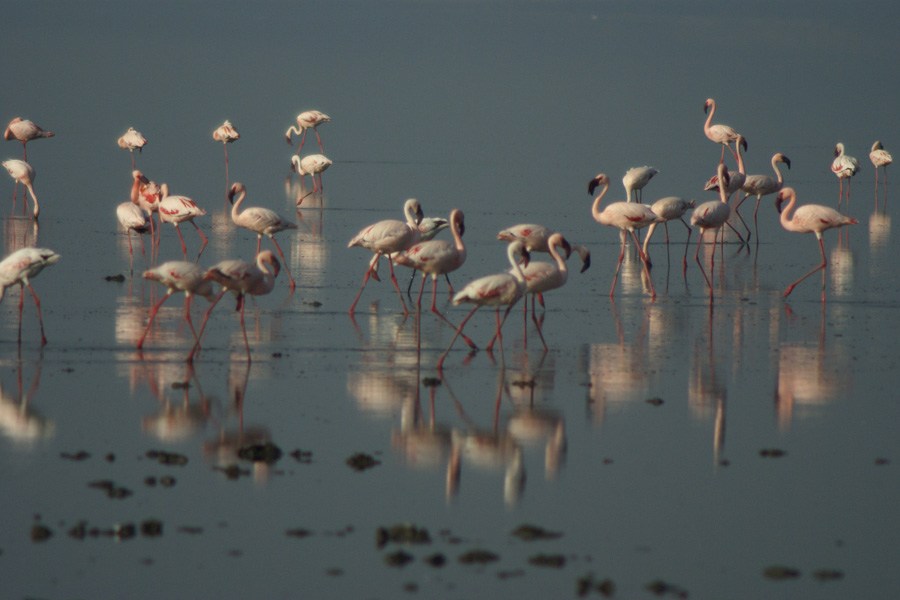 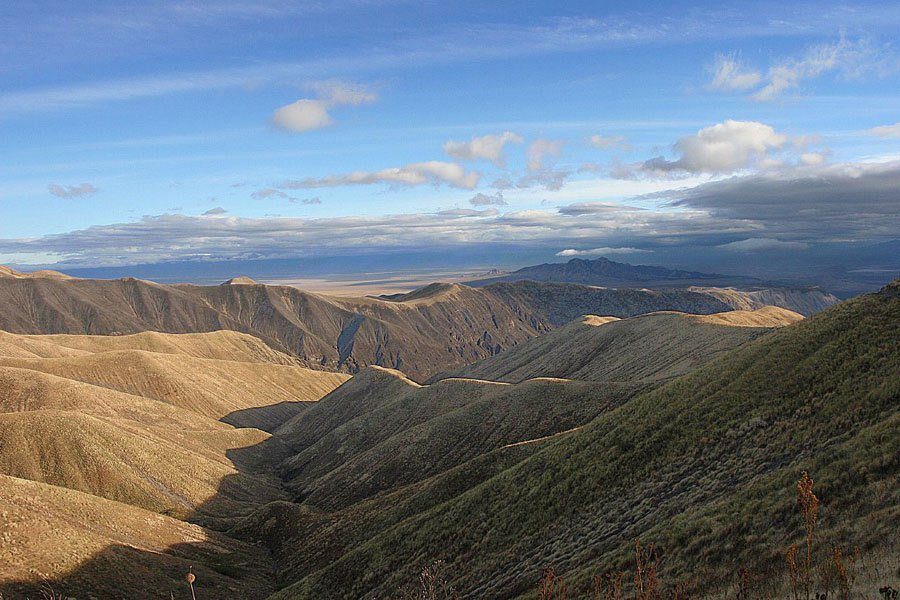 Lake Natron is in the Gregory Rift, the eastern branch of the East African Rift.Guillaume Baviere/Flickr 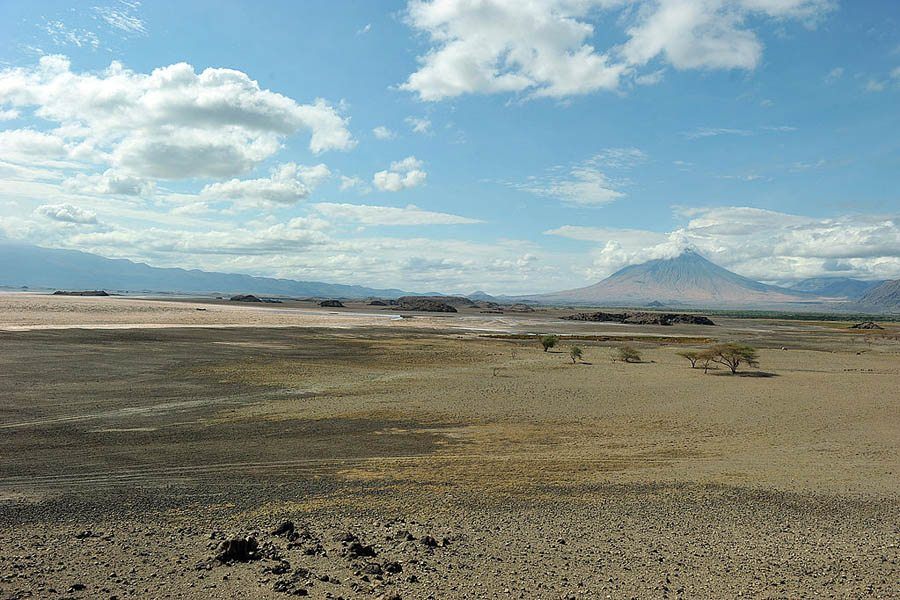 The lake is quite shallow, at less than ten feet deep. Its width varies in accordance with rainfall. TONY KARUMBA/AFP/Getty Images 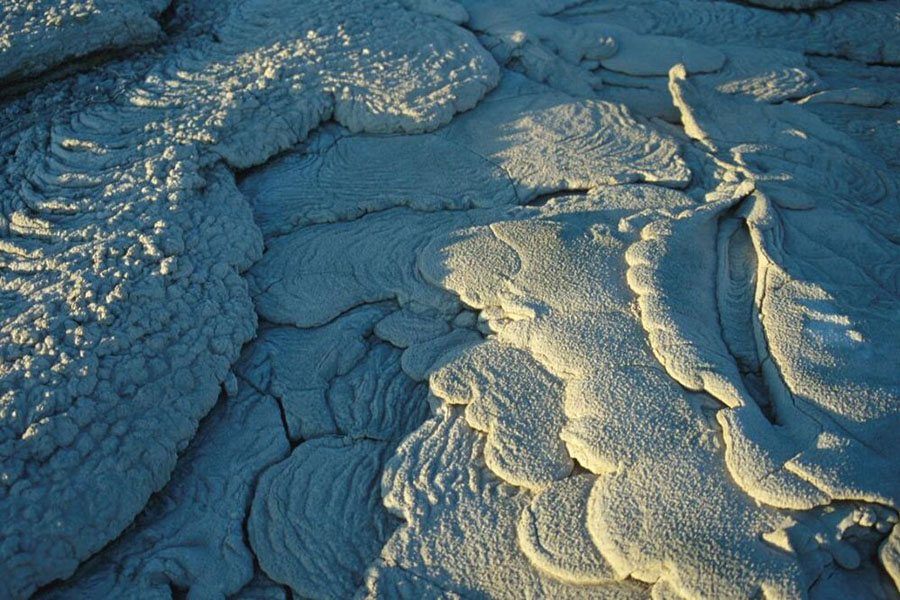 The sodium and potassium carbonate minerals of the lava are unstable and susceptible to rapid weathering. It can quickly turn from black to grey. Thomas Kraft, Kufstein/Wikimedia Commons 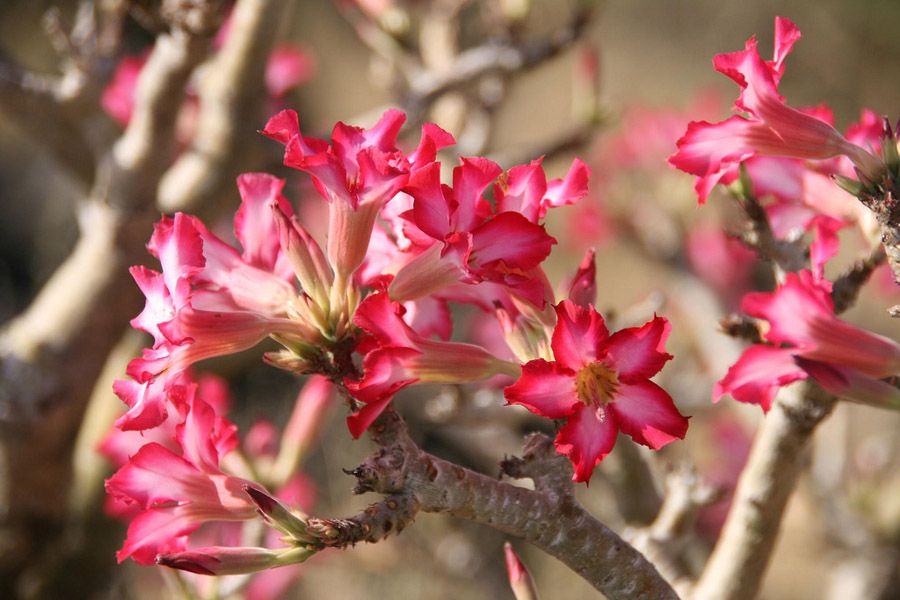 Even in the areas around the acidic waters of Lake Natron, life can, and will, flourish. Marc Veraart/Flickr

Amazingly, between 65 and 75 percent of the world’s population of lesser flamingos, for example, are born on Lake Natron -- and the lake's alkalinity actually aids in that process. Indeed, the extreme pH levels keep predators away from the baby flamingo chicks, which hatch on the lake's salt islands.

Volcanic carbonate ash also produces lush pastures, which prove to be a fantastic breeding ground during the wildebeest migration. Increasing the radius a little further from the lake and closer to Kenya, it's even easy to find lions, ostriches, gazelles, zebras, and buffalo in these surprisingly fertile environs.