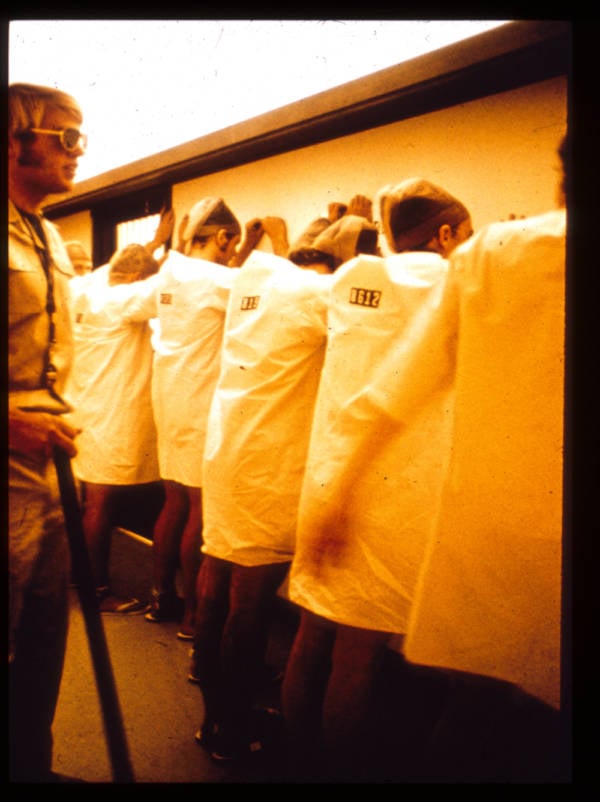 PrisonExp.orgPrisoners are made to face the wall as a guard watches over them.

Though both sides had internalized their roles and some inmates seemed to chafe at the boredom and the arbitrary nature of their guards’ commands, the first day of the Stanford prison experiment had passed by more or less uneventfully.

Prisoners would sometimes be pulled out of their cells and searched, even though they couldn’t possibly have had contraband that early in the experiment. The guards were generally rude and condescending. They often demanded that prisoners repeat their numbers to drive home their lowly status. Menial tasks were assigned, and penalties, such as being ordered to hold stress positions for extended periods, were being imposed.

By that first night, the guards had decided to punish less-compliant prisoners by taking away their mattresses, forcing them to sleep on the cold floor. They also disrupted the inmates’ sleep by being noisy in their common area, which was adjacent to the cells.

By noon on day two, prisoner #8612 had started showing the signs of a breakdown. He started screaming and raging, and Zimbardo himself had to come in to control the situation. The prisoner refused to calm down, and so the decision was made to release him from the study for his own sake.

This took the form of a “parole hearing,” accompanied by an extended stint in the broom closet, which was doing duty as a solitary confinement area. The release process was intended to be long and arduous, in order to further the impression that the prison was an all-powerful institution where inmates were helpless.

Bear in mind that this was all a voluntary exercise, and that — in principle, at least — everybody was free to go whenever they wanted to. 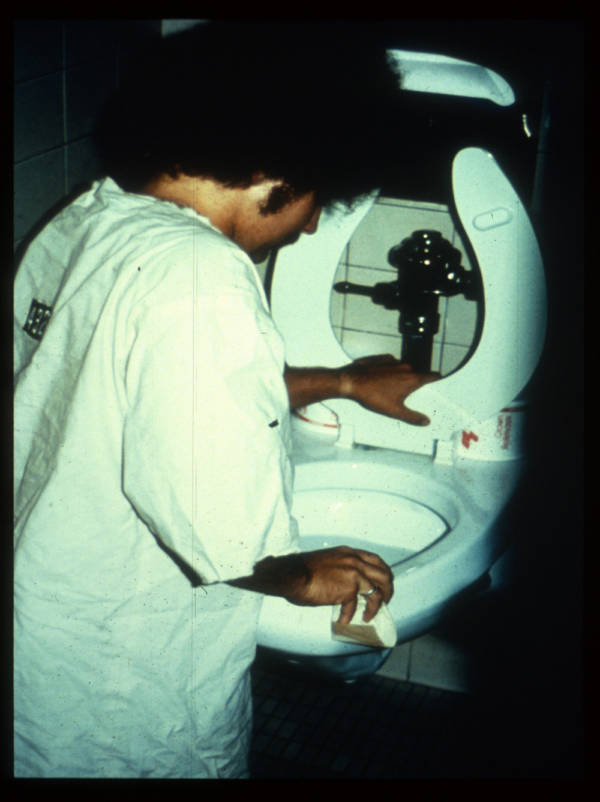 PrisonExp.orgAs a form of punishment, a prisoner is made to scrub a toilet.

While prisoner #8612 was being processed out, the other 11 prisoners were in an uproar. Arbitrary and cruel treatment by the guards had already provoked inmates to refuse to obey orders or to leave their cells. They refused to answer to their numbers when called.

Inmates in one cell barricaded themselves in by propping a mattress against the door. By that evening, things were bad enough that some guards, who were free to go home after their shift, volunteered to stay overtime and suppress the revolt.

After the clinical staff observing the experiment went home, the guards left on duty hit prisoners with blasts from a fire extinguisher and transferred them to the other cells to increase crowding. The empty cell was reserved for “good” inmates who hadn’t participated in the uprising. Perceived ringleaders, on the other hand, were shut up in solitary for hours.

Prisoners in the regular cells were refused leave to use the bathroom, and were instead given buckets to relieve themselves in. The buckets were then left unemptied in the cell all night long. The next day, guards forced the prisoners to stand in stress positions without their clothes on for hours at a time.