Lionel The Lion-Faced Man Was Billed As A Fearsome Sideshow ‘Freak,’ But Stephan Bibrowski Was Anything But

Stephan Bibrowski became a popular sideshow in the Barnum & Bailey Circus who reportedly enjoyed life as a performer, but his talents lay far beyond his thick layer of hair. 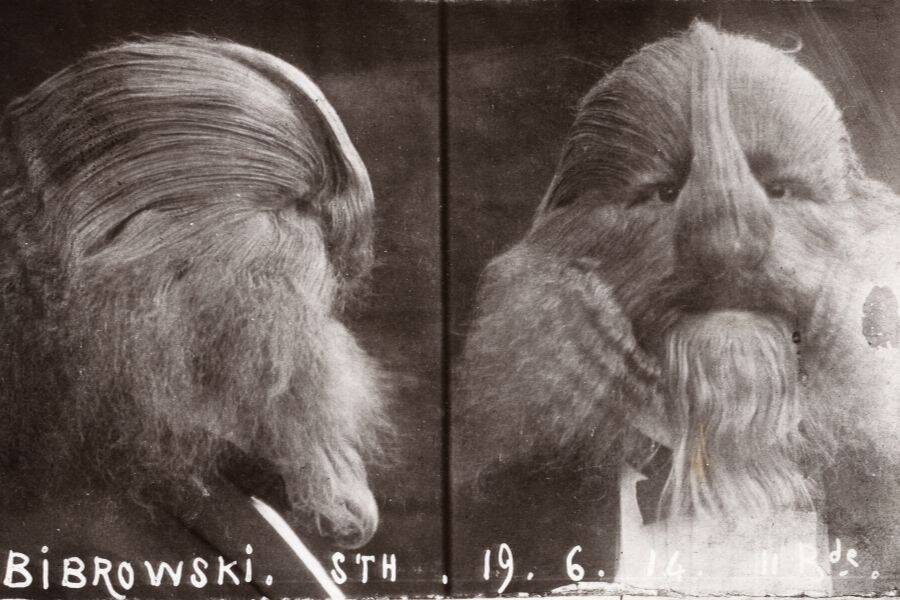 It was called “The Greatest Show on Earth.” It was the merging of two leading circus shows, the most exciting juggernaut of entertainment in the world. One of the show’s most famous entertainers was a man named Stephan Bibrowski, also known as “Lionel the Lion-Faced Man.”

Bibrowski became even more well known after the Barnum & Bailey Circus and the Ringling Brothers combined forces in 1919. Bibrowski, along with his fellow performers, helped treat the public to a show like nothing they’d ever seen before — a world of dazzling acrobatics, an exotic menagerie of wild animals, and curiosities one had to see to believe.

But there was a dark side to The Greatest Show on Earth, where a group of human beings afflicted with varying disabilities were put on display. In the circus world, these people were walking goldmines of curiosity, so-called “sideshow freaks.”

One of those “sideshow freaks” was Bibrowski, whose entire body was covered in at least two inches of long, flowing hair. P.T. Barnum used to advertise him as the “half-man half-lion” and renamed him Lionel the Lion-Faced Man.

Cleverly marketed as a rag-tag group of outcasts taken in by circus executives and given new life as showmen, sideshow performers were often forced into lives of extortion and put on display by men who were, for all intents and purposes, charlatans.

Though some sideshow performers were exploited for their conditions, Bibrowski appeared to be among the few who truly enjoyed his career as an exhibitionist. This is his singular story.

Stephan Bibrowski, Born To Be The Lion-Faced Man 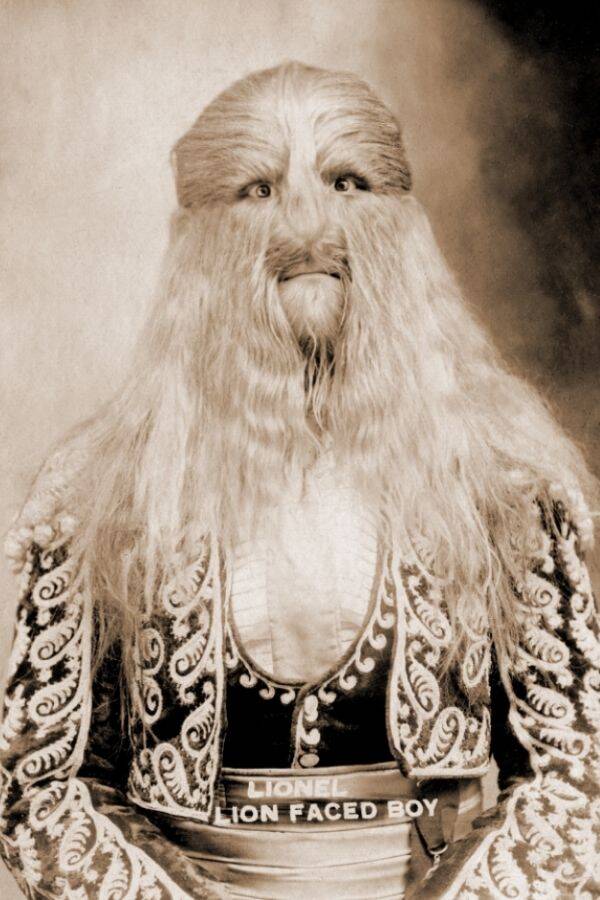 Wikimedia CommonsThis portrait shows Bibrowski, a.k.a. Lionel the Lion-Faced Man, when his hair was at his longest.

Though Bibrowski spent much of his life as part of Barnum & Bailey’s “freak show” traveling the world and becoming a household name among circus-goers, there isn’t much known about the man himself.

Most of the information about him comes from first-hand spectators and a freak show researcher named Francine Hornberger in her book Carny Folk.

Before he was a sideshow performer, Stephan or “Stefan” Bibrowski was just a young man afflicted with a rare condition now believed to be hypertrichosis.

Those with hypertrichosis or “werewolf disease” suffer from hair growth on areas of the body that wouldn’t normally be covered in hair. In extreme cases, as in Bibrowski’s, the hair can grow to longer lengths. Examples of those extreme cases include other well-known sideshow performers like “bearded ladies,” “wolf men,” or “Jojo the Dog-Faced Boy.” 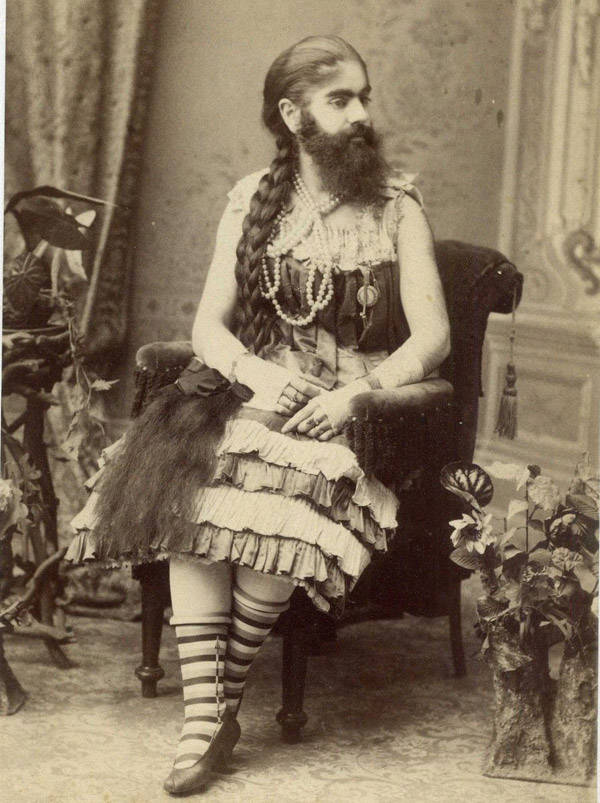 According to Carny Folk, Bibrowski was born in Warsaw, Poland, in 1890, covered in a one-inch layer of fine blonde hair. His mother reportedly told people that her son’s condition was the result of her witnessing his father be mauled by a lion while she was pregnant.

Rather than raise a baby with such an unsightly appearance, Bibrowski’s mother is said to have given him up at the age of four to a local financier and entrepreneur named Sedlmayer. Sedlmayer instantly saw the potential in the young boy’s condition, dubbed him “Lionel the Lion-Faced Boy,” and began parading him around Europe for cash.

Bibrowski Is Scooped Up By Barnum & Bailey 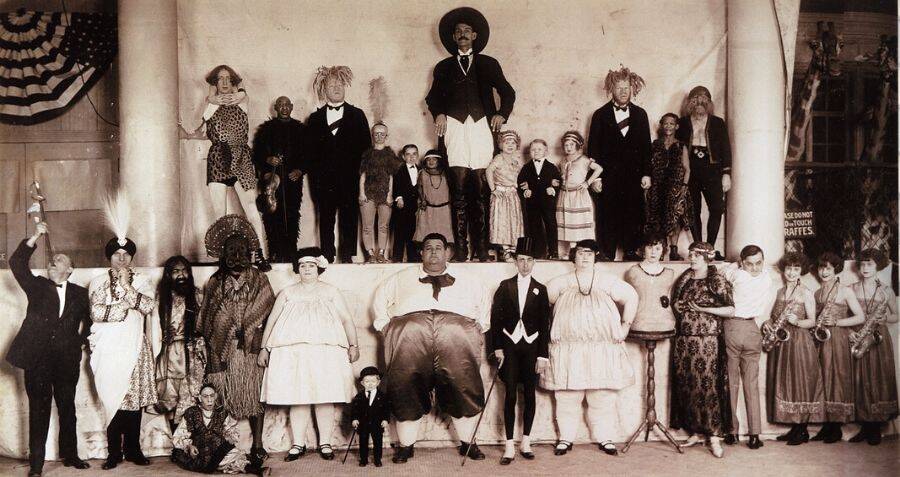 Wikimedia CommonsA group of the Ringling Brothers’ “sideshow freaks.” Bibrowski is pictured on the top right.

In 1901, Stedlmayer traveled to the United States with Bibrowski in tow and began exhibiting him at sideshows along the newly-opened piers and boardwalks on the east coast. While there, Bibrowski was noticed by talent scouts for the Barnum & Bailey Circus.

He was quickly picked up and put on display in the traveling circus’ sideshow where he performed acrobatic tricks and conversed with the audience.

For the next 19 years, Stephen Bibrowski performed with Barnum & Bailey circus, traveling the world with the rest of the “sideshow freaks.” In 1920, he finally settled in the United States for a time and began performing at a sideshow pop-up on New York’s Coney Island.

Though he’d been performing for years, Bibrowski’s stint in Coney Island gave curious spectators the chance to get up close and personal with the Lion-Faced Man. Most of them were startled to discover that he was not the savage human that he’d been made out to be, but a gentleman who shared more in common with them than they believed.

Bibrowski was a small man and had aspirations of becoming a dentist. He was intelligent and could speak five languages.

On his face, his hair grew in golden locks roughly eight inches long. Everywhere else, it could be up to four inches long. The only exceptions were the palms of his hands and the soles of his feet. But when given the opportunity to share his story with other humans, his condition seemed to disappear.

The Hidden Side Of The Lion-Faced Man

Though there aren’t many reliable accounts of his performances, there are dozens of rumors about the Lion-Faced Man that still persist to this day.

Some claim that Bibrowski’s mother never gave him up, and that she just let him live out his dream of performing, and that his parents were a large part of his life.

Others claim that Bibrowski enjoyed exhibiting his condition and celebrated it, feeling that it made him more interesting. One story goes that a hotel he was once staying at in New York City caught fire and that Bibrowski was the first one to evacuate. The Lion-Faced Man allegedly claimed that if his long locks were singed off, then he would “just be an ordinary man.”

Whatever the case, it stands to reason that there was much more to Bibrowski’s life than will ever truly be known. Though the details may be lost to history, the story of Lionel the Lion-Faced Man will undoubtedly live on.

Next, check out some more “sideshow freaks,” like the Snake Man, Prince Randian or the Lobster Boy.