Inside The World’s Strangest Prisons

Depending on where you live and the crime you've committed, your prison experience will be vastly different from others. Here are some of the strangest.

People have been at a loss for how to best handle convicted criminals throughout history. Public opinion has oscillated between favoring rehabilitation and punishment, with the only constant element being quarantine. Prisons came into existence largely as a method for isolating violent offenders from the innocent people outside. Most prisons are secure enough to do just that.

Not all prisons are equal, however. Depending on the country you live in, what sort of crimes you’ve committed, and how much money you can spend, your prison experience will be vastly different from others. Here are some of the extremes of incarceration from around the world: 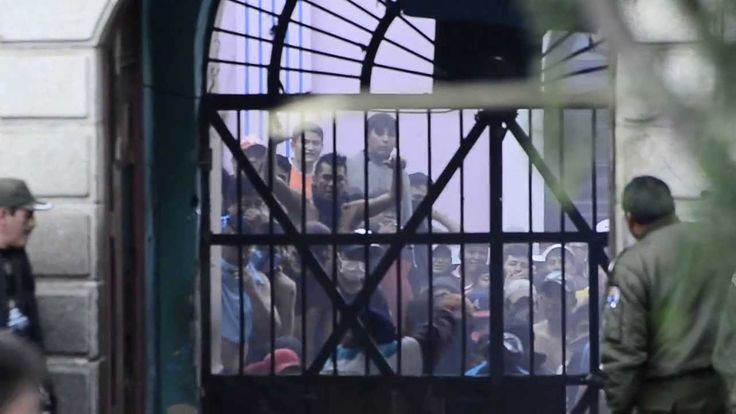 Visiting San Pedro prison, in La Paz, Bolivia, is like taking a spin through a Ferengi penal colony. If a bunch of stock characters escaped from an Ayn Rand novel, took over a small South American country, then set up detention centers for "collectivists," the result would be San Pedro. In fact, that's not far from what actually happened to create this odd place. Source: Pinterest 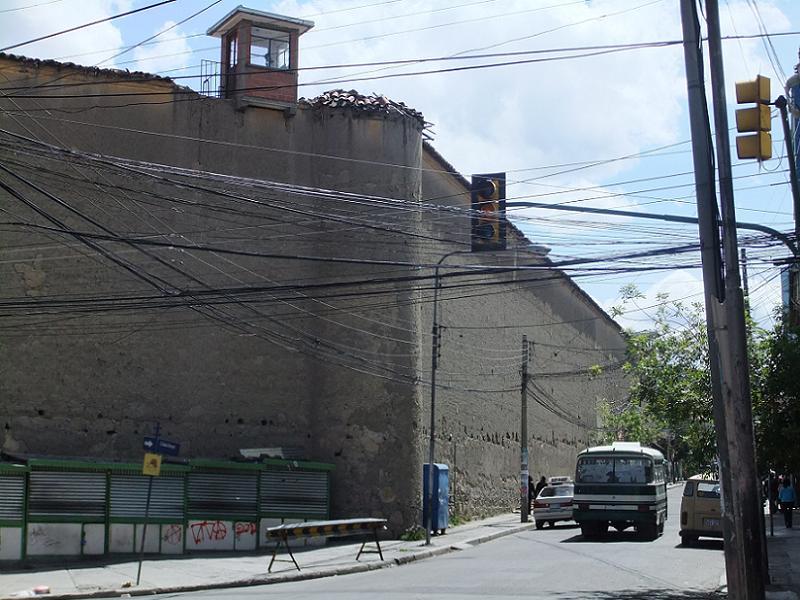 In 1986, Bolivia was going through a financial crisis. Sensing opportunity, a bunch of really bright whiz kids from Harvard and the Chicago School of Economics swarmed over La Paz and convinced the government to institute radical economic "shock therapy." All at once, public institutions were privatized, harsh austerity measures were bolted onto Bolivia, and every kooky idea ever to come out of a libertarian think tank suddenly had the force of law. Source: The Bucket List 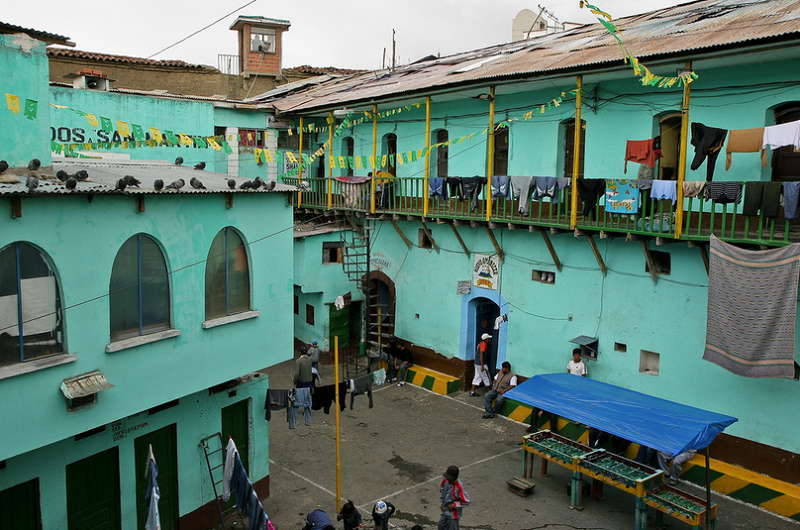 The effects of shock therapy were felt all over the country, but nowhere was the devil-take-the-hindmost social Darwinism more apparent than in the country's prison system. Prisoners in San Pedro fall into a strict wealth-based caste system. Inmates who can afford between $1,000 and $1,500 to cover "expenses" during their stay live like kings. Large, well-appointed cells, creature comforts, and frequent visits from family (and unindicted co-conspirators), are par for the course. Wealthy prisoners' meals are carefully prepared from the finest ingredients, and care is taken not to disturb the "guests" with intrusive shakedowns and unpleasant cavity searches. Source: The Huffington Post 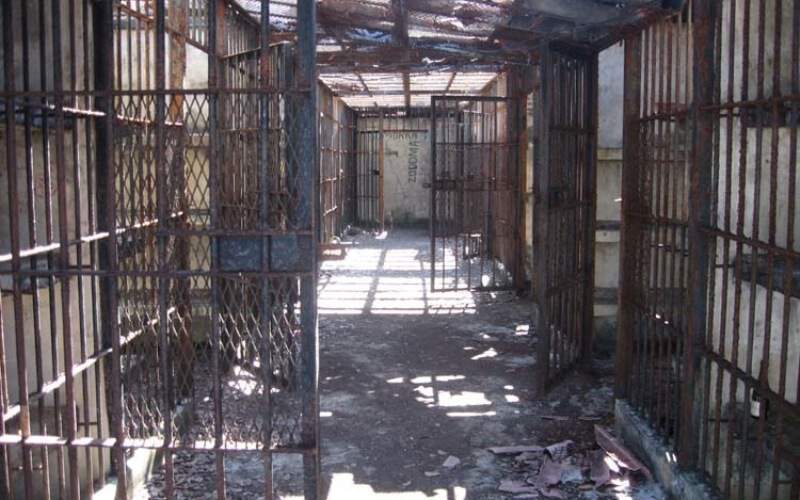 Prisoners who can't afford that kind of treatment, however, are in for a different experience. Indigent prisoners sleep in heaps on top of each other in bare concrete cells, often with buckets in place of running water or sanitation. Meals are whatever inmates can scrounge, and hard, menial labor (and occasional prostitution) is their only means of support. Oddly, the prison is popular with tourists, possibly because large amounts of cocaine are processed on-site and sold to visitors while well-bribed guards look the other way. Source: YouTube

The Bastøy rehabilitation center, in Oslo, Norway, is at the extreme opposite end of the ideological spectrum from laissez-faire San Pedro. Here, the guards usually don't wear uniforms because it's felt to create an unnecessary division between staff and residents, which is what they call inmates here. Source: Harvest

Bastøy sits on an island in Oslo Harbor. So it's like Alcatraz, but without the shattered souls and desperate escape attempts that end in shootings. In fact, the guards generally aren't armed – it sends the wrong message, as do walls, fences, steel bars, shakedowns, and tower guards with shoot-to-kill orders. Prisoners at Bastøy live three or four to a room, each having his own key to the cottage, and many commute into the city to work every morning. Having been turned loose on the defenseless population of Oslo, the inmates are essentially unsupervised until quitting time, when they're expected to report to the docks for transport back to the island. Source: Wikipedia

Running a prison on what amounts to the honor system strikes most people as odd, but it's hard to argue with the results. Bastøy exists inside of Norway's very special approach to treating crime. Frankly, it's hard to imagine why any of them would even want to escape. Source: Blogspot

Yeah, they have a bunch of murderers and rapists there, in case you were wondering. Source: Harvest 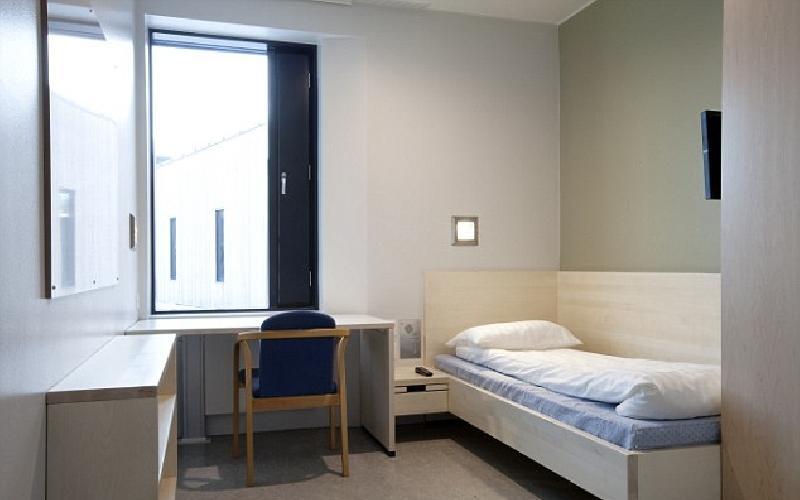 Bastøy isn't an isolated example of Norway's attitude toward incarceration. Norway doesn't have the death penalty, and the longest prison sentence the courts can hand out is 26 years, so the expectation is that every inmate will eventually be released back into Norwegian society. This forces the system to focus on rehabilitation rather than retribution. This is a typical cell in Norway's Halden prison. Source: Matichon 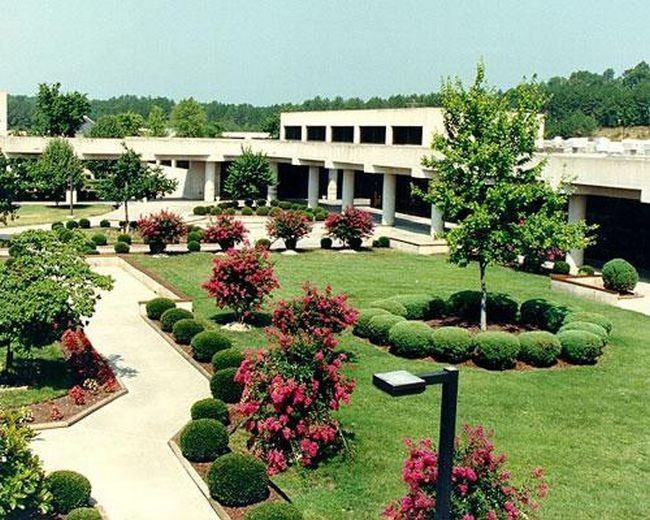 If you read the last few entries with a twinge of conscience, thinking about how America routinely treats its prisoners, relax. Some federal prisons in the United States are just as nice as Halden or Bastøy. Butner Federal Correction Institute, for example, cultivates a civilized atmosphere that's nothing like the brutal cages America is famous for. Source: Pitria 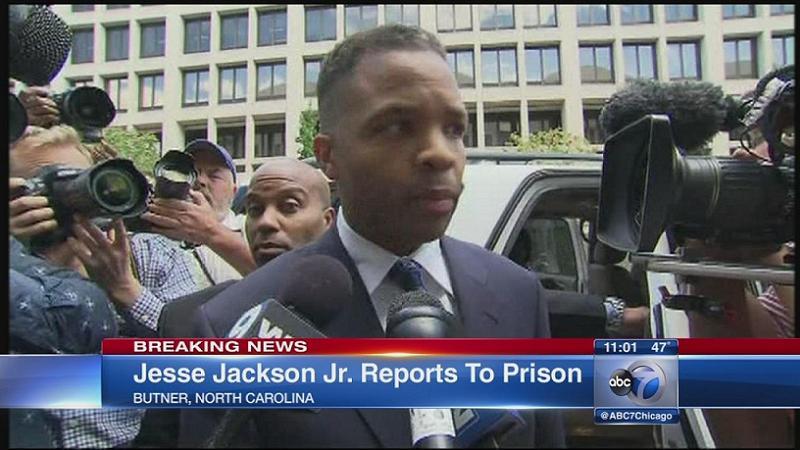 So, how do you get sent to the federal country club in Granville County, North Carolina? It helps if you're rich and famous. Among the low-security facility's 1,300 inmates are Bernie Madoff, who swindled billions of dollars out of retirees and Holocaust survivors, among others, and Lee Farkas, who was convicted of 14 counts of fraud and sentenced to 30 years. Farkas ran a bank that was shut down for securities fraud after destroying the holdings of various other banks that were actually solvent, throwing perhaps tens of thousands of people out of work, and conning the federal government out of billions of dollars. Former Congressman Mel Reynolds, convicted in 1997 of bank fraud, statutory rape, and solicitation of child pornography, also had to go to Butner for a while – don't worry, he was released after 8 years. Jesse Jackson, Jr., pictured here, actually showed up early to start serving his sentence. Source: ABC 7 Chicago

Butner's inmate list reads like a who's-who of wealthy, well-connected sociopaths. Jon Burge, for example, was the Chicago police commissioner who tortured over 200 mostly poor, minority suspects, sometimes with a cattle prod, into giving false confessions. At least one of his victims, who was later sentenced to death (later overturned), was hospitalized for burns on his thighs. Burge even shot suspects' pets to elicit mostly false confessions. He also obstructed justice and committed perjury to hide his 19-year rampage. Burge is housed in Butner's lowest-security facility, where inmates enjoy open spaces, Internet access, and frequent family visits. Source: JJKLLC 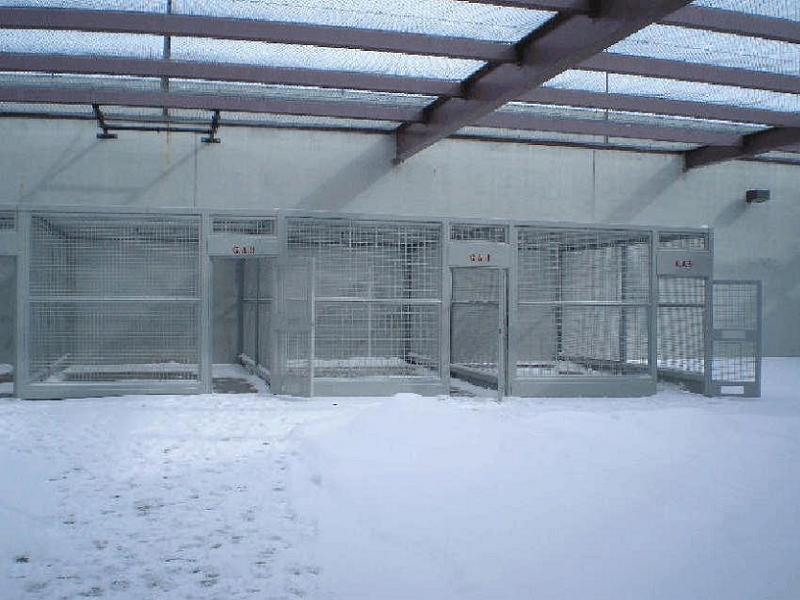 At the opposite extreme of the federal prison system sits the maximum-security facility in Florence, Colorado, known as ADX. ADX is the most secretive prison in North America, with every media request since 2002 having been rejected. Virtually all that's known about this facility comes from disclosures in a federal lawsuit over conditions at the prison. ADX inmates are generally confined to cells the size of bathrooms for 23 hours a day in such total isolation that weeks can pass without human contact, even with guards. At the beginning of the exercise period, an automated door slides open to admit the inmates, one at a time, into these cages. Prisoners are allowed a maximum of 10 hours of such "recreation" per week. Source: Boston Globe 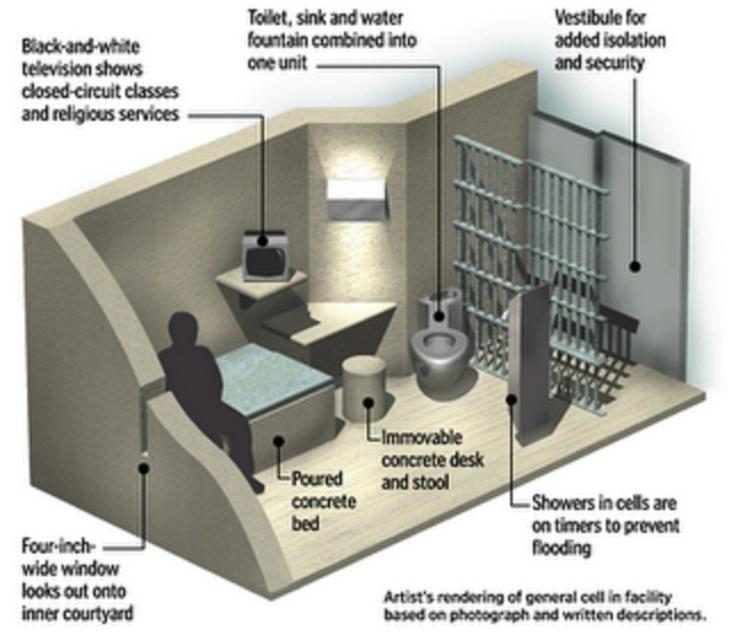 ADX has been described as America's harshest mental hospital. Though it is illegal to house mentally ill people under the conditions there, hundreds of people with diagnosed mental illnesses have been shipped to the facility. One former inmate, who was prescribed Seroquel for his bipolar disorder, had his medication stopped because, in the words of the prison psychologist: "We don't give out feel-good drugs here." The inmate in question, who was originally convicted of assault and who is a party to the class-action suit, eventually lost control and began cutting himself. ADX staff responded by strapping his wrists and ankles to his poured-cement bed and leaving him unattended. Source: Dagbladet 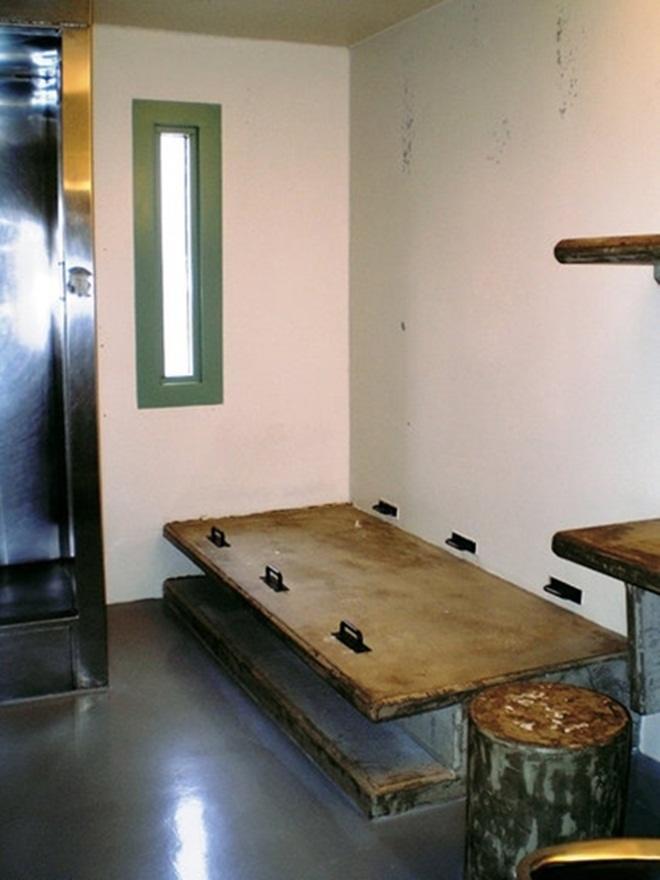 One of the many, many tie-down beds at ADX. Inmates at ADX, deprived of significant human contact for years – sometimes decades – at a time, generally go insane. Inmates have gouged out their own eyes, cut off fingers and eaten them, smeared themselves with feces, and spent days rhythmically banging their heads against doors until they lose consciousness. The thick concrete-slab walls muffle sound, and the bars at the front of the cell prevent prisoners from approaching the solid outer doors in a deliberate attempt to keep prisoners from seeing each other. Food and medicine – not, presumably, anything that feels good – are fed to inmates through automated chutes to prevent accidental human contact. Perhaps as many as 80,000 people are presently being held under solitary conditions in the United States. Congress is said to be looking into the matter, as it has since at least 2010. Source: VN Express 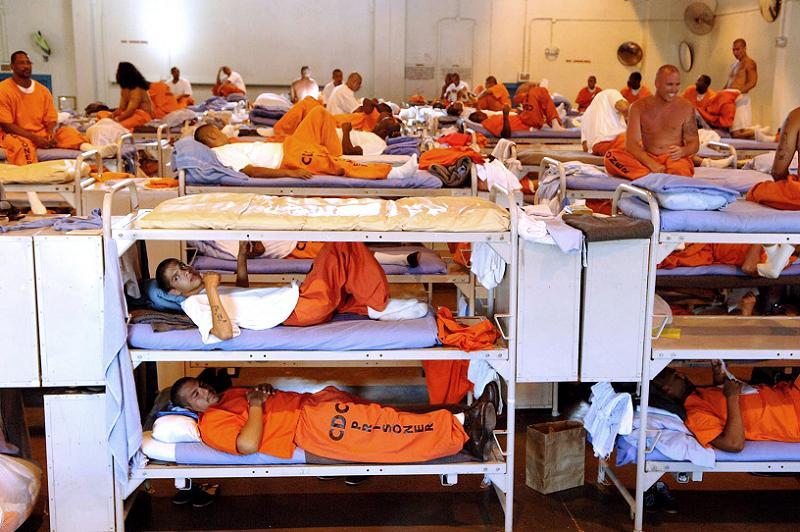 Not to harp on the United States, but America's multiple overlapping prison fiefdoms are so goddamn dysfunctional they rate multiple entries on any list of awful injustices. California, where this picture was taken, is currently in federal receivership for overcrowding. Inmates held under these conditions have an average of 57 square feet of space to themselves. To visualize 57 square feet, look at the ceiling in the office you're in right now. Count off seven acoustic tiles. That's about 56 square feet. For comparison, prisoners at the Auschwitz II facility were allotted 88 square feet. Source: San Francisco Examiner 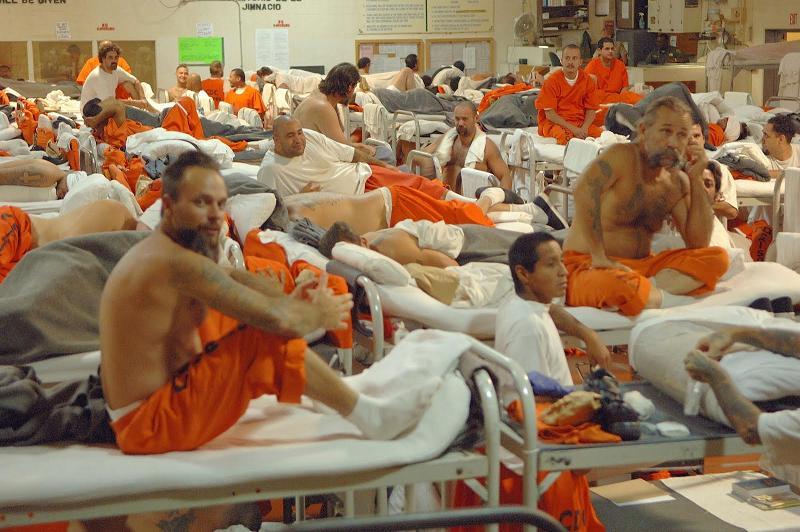 California's prison population increased by 500 percent between 1978 and 2000. Fueled by the war on drugs, three-strikes laws and high recidivism among recent parolees, the state prison system, which was designed for 80,000 inmates, housed almost twice that number at its peak. The state is under a federal court order to reduce the population to "only" 137.5 percent capacity, or 110,000 inmates, by 2016. Governor Jerry Brown has called this goal "unrealistic." Source: Toke Signals 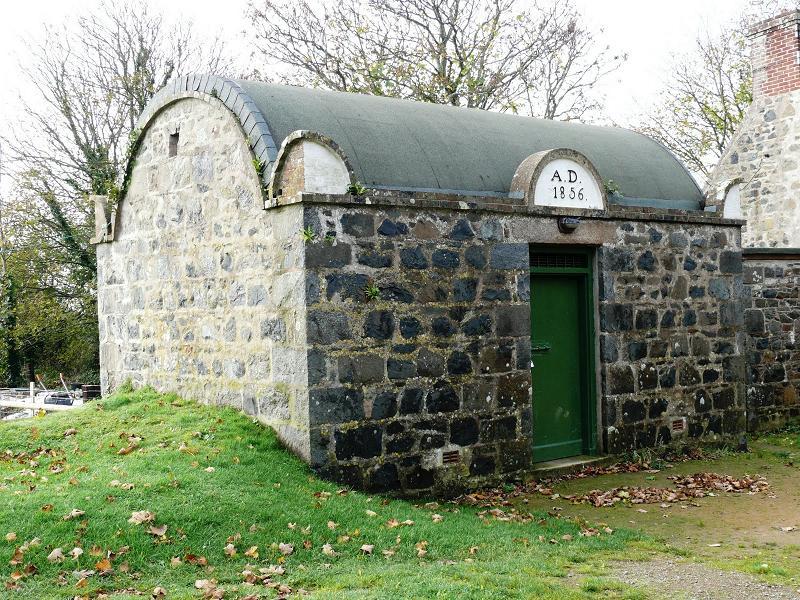 If it's possible for a prison to be cute, this is it. Sark prison, on the British island of Sark, was built in 1856 and has a capacity of two. The place is mostly used as an overnight holding pen for rowdy drunks. People accused of serious crimes are generally shipped to nearby Guernsey. Source: Guia Del Trota Mundos 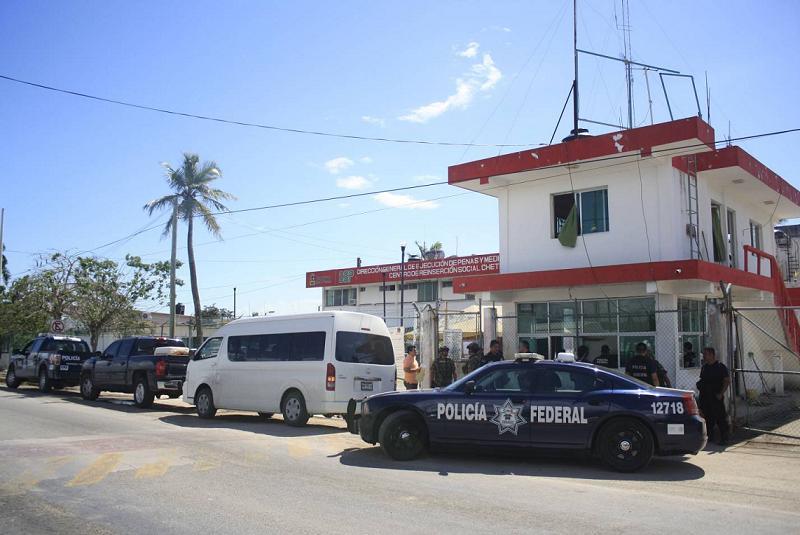 The phrase "Mexican prison" is generally not encouraging. Popular accounts, and quite a bit of unpopular reality, have planted the image of overcrowding, squalor, and relentless gang violence in most people's heads. Granted, Mexico certainly does have places like that, but Cereso Chetumal isn't one of them. The prison houses 1,100 inmates and hasn't reported a single violent incident in 10 years. Source: Sipse 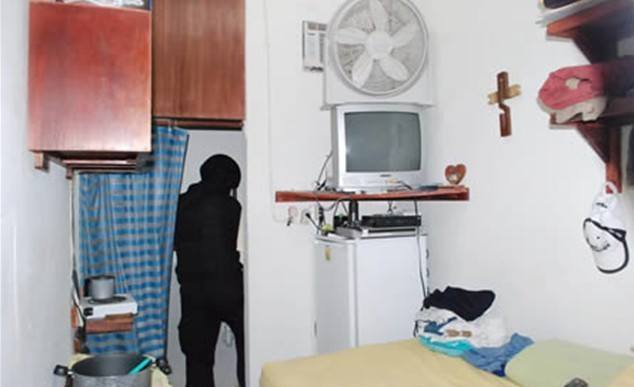 Cereso Chetumal has a security regimen that can charitably be described as relaxed. Prisoners are fed decently (it is Mexico, after all) and encouraged to maintain contact with their families. Pets are allowed, as are afternoon siestas. The place even has a spa with massage treatments. As for how prison authorities control the inmates' violent urges . . . Source: Blog 163 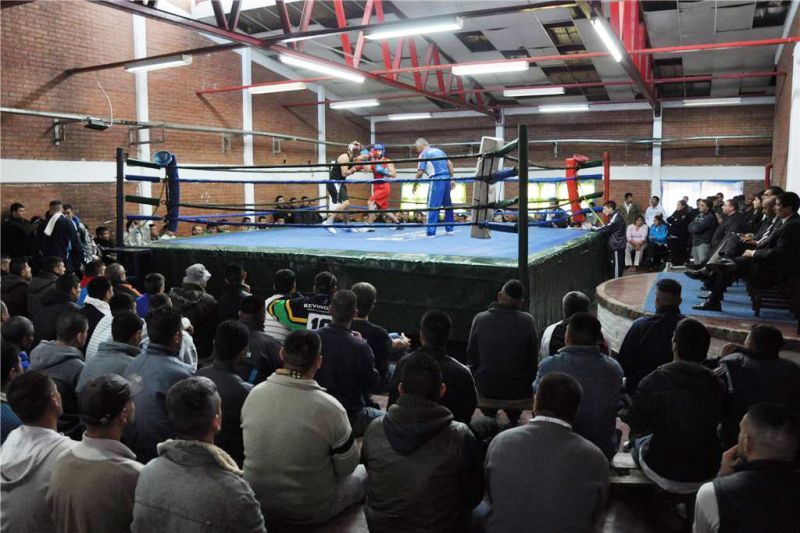 They don't. The prison schedules regular boxing matches where inmates can pound the bad blood out of each other. Fights rarely go more than two rounds, after which nobody wants to kill anybody anymore. Source: The Phuket News 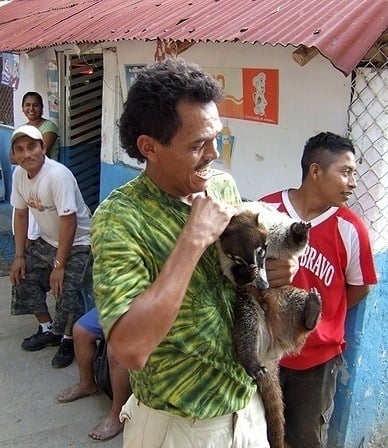 We never told you what kind of pets were allowed. Source: JPG Mag

Next, learn about one of the world's worst prison gangs, with this look inside the Aryan Brotherhood.