Michelle Carter faces up to 20 years in prison if prosecutors can prove that her words convinced Conrad Roy to end his life. 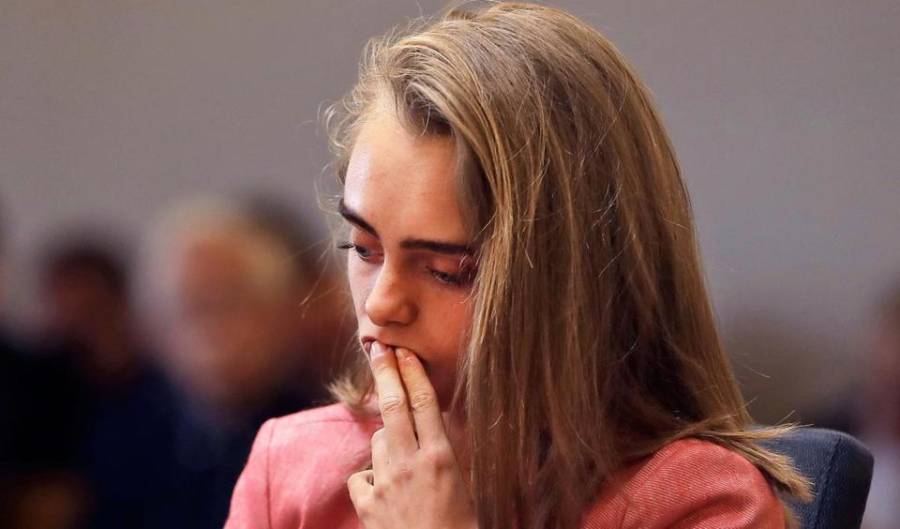 Pat Greenhouse/The Boston Globe via Getty ImagesMichelle Carter listens as ADA Maryclare Flynn makes her opening statement, displaying many texts between Carter and Conrad Roy III as Carter’s trial proceeds in Bristol County Superior Court in Taunton, MA on Jun. 6, 2017. She is charged with involuntary manslaughter for encouraging the 18-year-old Roy to kill himself in July 2014.

“I thought you wanted to do this,” 17-year-old Michelle Carter texted her boyfriend, Conrad Roy III, on a summer day in 2014. “The time is right and you’re ready…just do it babe.”

She was telling the 18-year-old Roy to kill himself. And he did.

Carter’s encouragement was definitely wrong, but was it illegal? A judge will decide this week as Carter, now 20, sits on trial for involuntary manslaughter. If convicted, Carter could face up to 20 years in prison.

Though assisting in suicide is not illegal in Massachusetts, the extent of Carter’s involvement suggests that she didn’t only help Roy carry out the deed, she convinced him to.

The high school couple had sent hundreds of text messages in the days leading up to Roy’s last and dozens on the morning of his death.

“You’re finally going to be happy in heaven. No more pain,” Carter wrote. “It’s okay to be scared and it’s normal. I mean, you’re about to die.”

When Roy seemed to be backing out of his plan, she pressed him.

“So I guess you aren’t gonna do it then, all that for nothing…I’m just confused like you were so ready and determined.”

He told her he wanted to go back to sleep. It was early in the morning.

“Just go somewhere in your truck,” she told him. “And no one’s really out right now because it’s an awkward time.”

So Roy drove to a Kmart parking lot and began pumping carbon monoxide into his car.

At one point, he got scared, left the vehicle, and called Carter on the phone.

“Get back in,” she told him. And then, prosecutors say, the teen listened for 20 minutes as he cried in pain and died.

They’re arguing that she used Conrad, who went to a different school, to get attention from her friends. Carter was scared, prosecutors say, that if Roy didn’t follow through with his suicide, she would look like a liar.

The defense counters these arguments by pointing out that Roy had been depressed for awhile, had attempted suicide before, and that Carter had tried to convince him to get help at an earlier time in their relationship.

“This is a suicide case,” Joseph Cataldo, Carter’s attorney, said. “It is not a homicide case.”

Carter couldn’t have killed Roy, the defense says. She was 30 miles away. 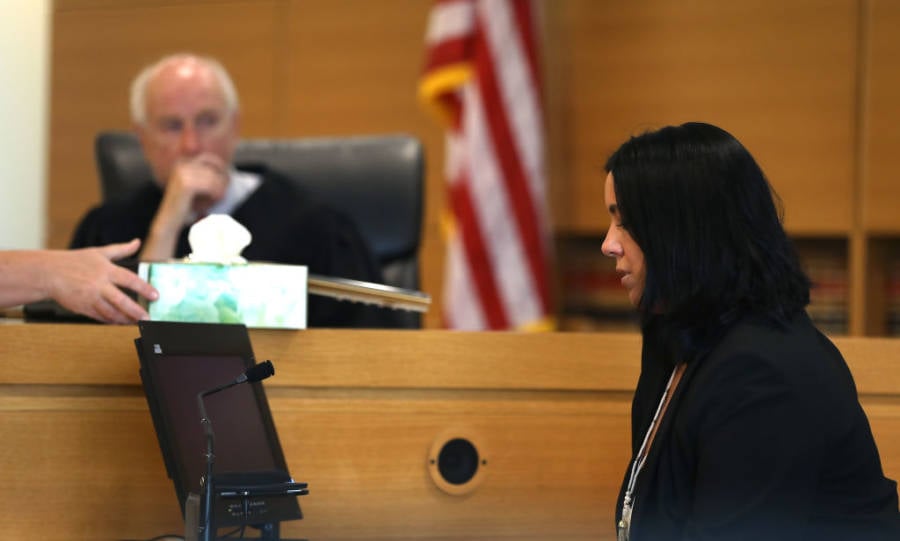 Pat Greenhouse/The Boston Globe via Getty ImagesLynn Roy, mother of the deceased, is offered tissues during her testimony before Judge Lawrence Moniz as the trial of Michelle Carter proceeds in Bristol County Superior Court in Taunton, MA.

The case isn’t completely unprecedented. People have been tried for participating in Russian roulette and, in another case, a man was convicted for helping his suicidal wife load a gun and offering her tips on how to shoot it.

But in today’s world, where lives are increasingly experienced online, some argue that texts from an individual may have as much power as the same person’s physical presence. Determining the weight of individual texts will likely be important in this case, as Carter and Conrad only met in person three times throughout the course of their relationship.

“The key issue is going to be causation, of who actually caused the death,” Laurie Levenson, a professor at Loyola Law School in Los Angeles, told The New York Times. “Did she, or did the victim himself?”

Next, read about how lower rates of teen suicide have been linked to same-sex marriage legalization. Then, read the story of Harvey Robinson, the famous teenage serial killer. Finally, read up on R. Budd Dwyer, the American politician who killed himself in front of television cameras.