T-Shirt Company Tries To “Reclaim” Swastika As Symbol Of Love 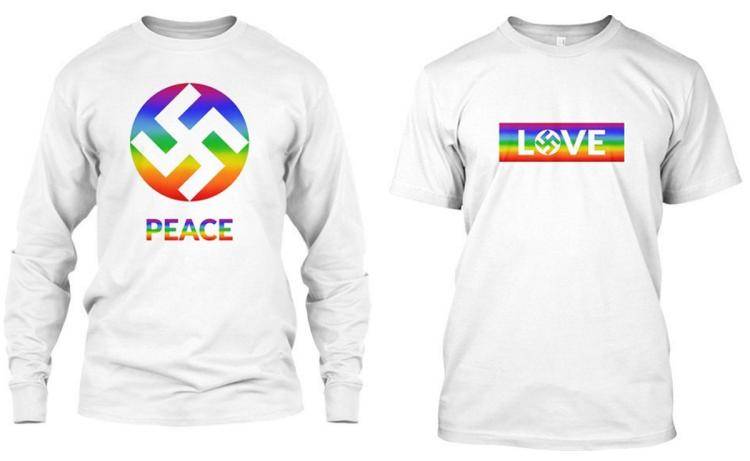 Reclaiming words and symbols — adopting things meant to be offensive, and turning them into something ironically positive — sometimes can be quite effective.

This is most definitely not the case with the swastika, which became apparent (as if it wasn’t already) when the U.S. clothing company Teespring featured rainbow-covered Nazi symbols on a new clothing line.

The company allows anyone to design their own shirts. If they sell on the website, Teespring produces them. The Swastika shirts were made by a group called KA design.

“This is a Swastika,” they said in a promotional video on their Facebook. “It’s 5,000 years old.”

Oh, and also the murder of six million people.

To KA design’s credit, it really does seem like they were trying to do something that was anti-hate and grabbed people’s attention.

(They succeeded on one of those fronts.)

They weren’t wrong about the symbol’s history, either. The first known swastikas were circulated about 5,000 years before Hitler came onto the scene — deriving from the Sanskrit word “svastika,” or “good fortune.”

It’s still a sacred symbol in Buddhism, Hinduism, Jainism and Odinism and can be found on many temples and religious statues throughout Asia, according to the United States Holocaust Memorial Museum.

For some crazy reason, it seems that Teespring thought they — as a for-profit clothing company — were somehow qualified to reclaim a symbol still used by hate groups around the world in the same way civil rights leaders have readopted oppressive hate speech terms.

A lot of rappers, for example, have reappropriated the n-word, women are taking back the term bitch (which I can say, because I’m a woman), and gay people have successfully made terms like gay, fag and queer a celebratory part of their culture.

Even the word suffragettes — which is almost exclusively positively used nowadays in association with the badass bitches (see what I did there?) who got us the right to vote — started as a derogatory term.

It was initially used by the Daily Mail to insult the women fighting for equal rights, but the women made it their own and hardened the “g.” Like suffra-Get the vote.

“Reappropriation of ethnic and sexual slurs starts as an act of bravado by a few of the oppressed, then may become an empowering mechanism for a much wider community,” Tony Thorne, the curator of the Slang and New Language archive at King’s College London, told The Guardian.

“It’s pleasingly ironic that those discriminated against have learned the Orwellian trick employed by the state and the establishment of hijacking everyday language (as in ‘doublespeak’) for their own nefarious purposes. Alternative discourse ousts and replaces the discourses of power.”

But there are a lot of things that have to happen for a word or a symbol to successfully be rebranded.

For one, it seems pretty obvious that the reclamation has to be done by people who are actually affected by the term (White people should still never say the n-word. I don’t care if you know all the lyrics to that Kanye song.) — rather than a faceless company that’s trying to profit off of “taking back the Swastika.”

The Anti-Defamation League was not about it.

This is an offensive use of #Nazi imagery. Fashion can't reclaim this symbol from #hate: https://t.co/URTrUTfGRe

Same with the Auschwitz Memorial, which pointed out that this new wave of rainbow swastikas wasn’t the t-shirt company’s only horrifying product.

.@teespring Remove all pro-Nazi designs from your page. Its disrespectful to the memory all victims of Nazi Germany. It's sad you allow it. https://t.co/poz5d5ms1T

.@teespring Do you rather commemorate the Holocaust, or you deny it? Some t-shirts from your page. @Ostrov_A pic.twitter.com/EXKW5DMTRG

“This project was intended to be innocent and peaceful,” the failed swastika reclaimers told The Jerusalem Post in response to the outrage their design had caused. “We were sincerely trying to convey an extremely positive message. But as soon as people saw the swastika, they became violent and aggressive.” 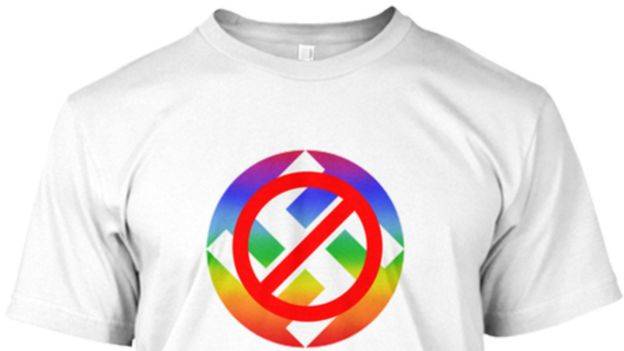 They changed the design to be anti-swastika. And don’t worry, em>they forgive us for being so mad.

“We understand and accept every criticism,” KA design representatives went on. “However, we didn’t expect so much hate from people. Our project goes strictly against Nazi values and doesn’t in any way support them. But a large number of people called us Nazi,” they continued. “We forgive everyone. And we hope to be forgiven.”

Next, read about why people have mixed feelings about this replica of Hitler’s bunker. Then, check out these 35 bizarre and offensive vintage ads.