"I was sitting at a bar and said to my wife, 'Hey, I want to get a statue made of a middle finger, and I’m going to put it up on the lawn'... If you don’t want to look at the building, look at this." 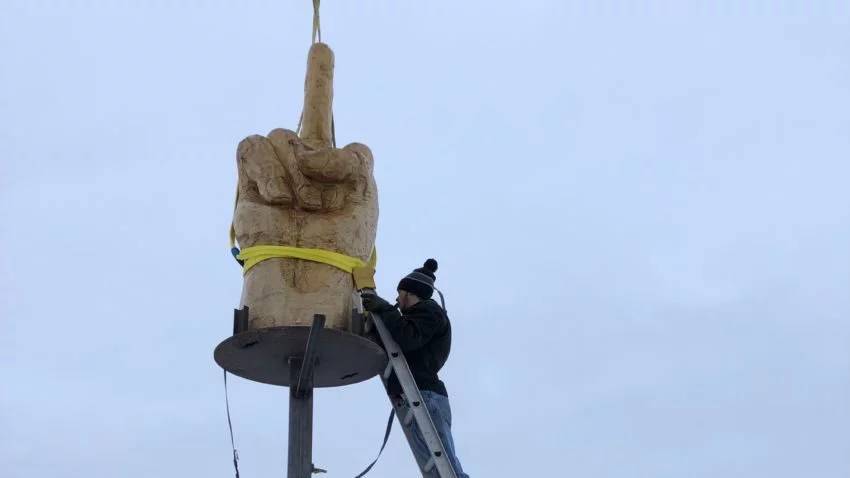 They wouldn’t let Ted Pelkey build a garage, so he decided to build something else instead.

After a more than ten-year fight with local officials over the permit to build the garage on his property in Westford, Vt., Pelkey decided to take revenge by erecting an enormous statue of a middle finger for all to see, according to Boston.com.

The 700-pound wooden statue sits atop a 16-foot pole as it’s bathed in the glow of two floodlights, allowing passersby on Route 128 to see it at all times. This gigantic embodiment of frustration and revenge cost Pelkey $4,000 to commission, but after the struggle he’s endured, he feels it was all worth it. 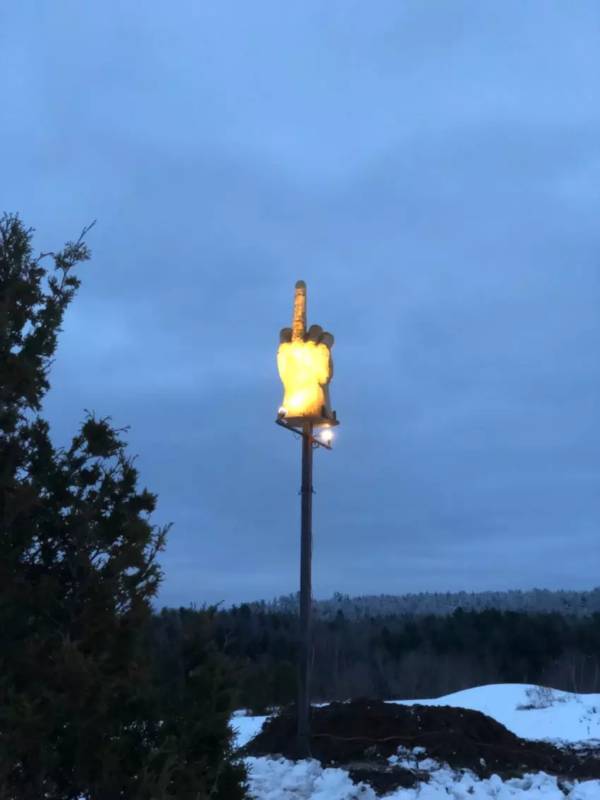 Pelkey’s struggle began more than a decade ago when he first applied for a building permit with the Westford Development Review Board (DRB). He sought to build the garage on his property so that he could move his truck repair and monofilament recycling businesses right next to his home, as opposed to operating out of Swinton, some 25 miles away.

Pelkey imagined a bright future in which he could “get out of bed in the morning, take [his] coffee, walk across the driveway, and go to work.” But the DRB determined that the application materials were insufficient and denied his request.

Time and again over the last decade, Pelkey’s applications have likewise been denied. Local officials claim that he simply has met all of the necessary requirements — most recently, necessary information about the structure’s planned uses and security lighting.

However, Pelkey claims that the DRB and other local officials simply have a grudge against him.

At least one DRB member, Chair Matt Wamsganz, reportedly has a troubled past with Pelkey, though all involved have declined to comment on the specifics of their past. Nevertheless, Wamsganz decided to not to recuse himself from Pelkey’s DRB hearing and insisted that he could be impartial.

The DRB indeed maintains that Pelkey has received the same treatment that anyone else would. According to Allison Hope, chair of the Westford Selectboard:

“We’re all professional adults in this realm who are volunteering our time and energy for the benefit of town residents… Even if one person on the DRB has had somewhat less than stellar interactions with a member of the public, it doesn’t mean they can’t deal with any applications that have to do with that person in an appropriate manner… From my own personal perspective and what I’ve seen/heard/read, the town staff and boards have been professional and appropriate toward the Pelkeys, almost to a fault.”

But still, Pelkey says he’s been given a raw deal. “I’ve been put through the wringer by these people, and it’s just not right,” he said. “I haven’t been treated fairly at all.” 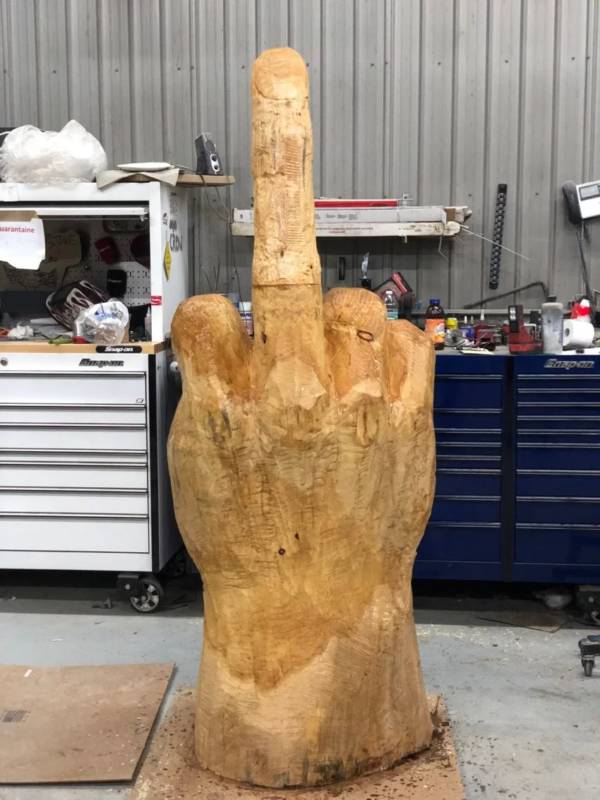 Fed up after years of perceived mistreatment, Pelkey decided to take revenge in October.

“I was sitting at a bar,” he recalled, “and said to my wife, ‘Hey, I want to get a statue made of a middle finger, and I’m going to put it up on the lawn’… If you don’t want to look at the building, look at this.”

And after he had the middle finger built and erected, it also became clear that the town couldn’t do anything about it. 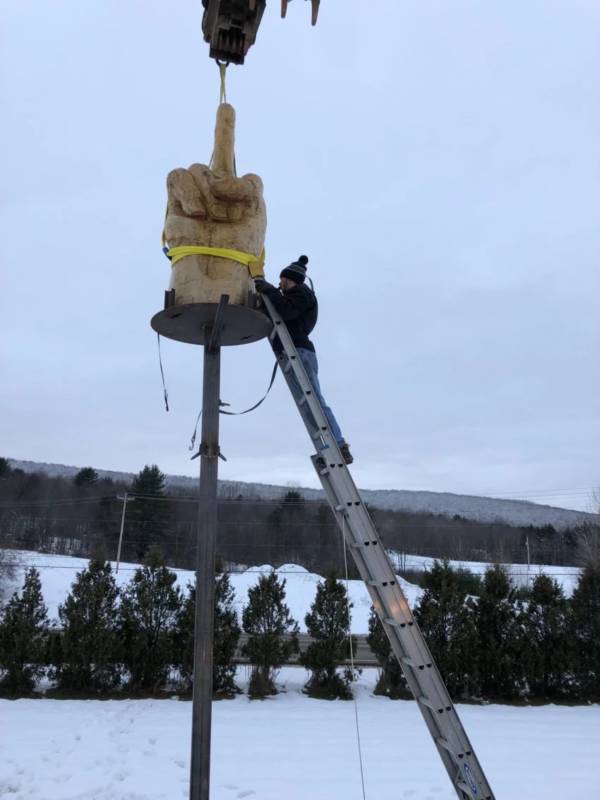 While Vermont has strict laws about billboards, local authorities have no legal pretext for removing Pelkey’s statue because it doesn’t serve as any kind of advertisement.

“Although the structure is visible from a state highway, it is outside of the State Right of Way and not within our jurisdiction,” Jacqui DeMen, a spokeswoman for the Vermont Agency of Transportation said. “The structure does not meet the statutory definition of ‘sign’ and thus can’t be regulated under the Vermont Billboard Law.”

“He apparently can do what he’s done,” likewise concluded Hope.

With the statue free to stand tall, Pelkey claims that many locals have taken notice and become aware of his case — just as he’d hoped.

As Pelkey put it:

“It was critical to me to make sure that my neighbors and the people who live in this town understood that I didn’t put that up there for them. It is aimed directly at the people who sit in our town office… I’m hoping that maybe some good comes out of it. Maybe.”

Pelkey may find out if any good has come of it when his appeal is heard in January. Until then, at least, his statue will surely stand.

For more tales of revenge, read up on Buford Pusser and the true story behind Walking Tall. Then, learn all about Marvin Heemeyer and his killdozer.