The teleocrater adds a new wrinkle into the story of how dinosaurs evolved.

It’s long been assumed that the creatures who lived before dinosaurs looked fairly similar to their evolutionary successors.

But new laser scan findings suggest that wasn’t the case.

In fact, if you want to get an idea of the animals roaming the Earth 245 million years ago, you don’t have to go much further than the zoo.

The Teleocrater rhadinus lived 10 million years before dinosaurs came to be.

They walked on four stout legs, their muscular bodies were 7 to 10 feet long, and had they had long necks and tails.

“Teleocrater fundamentally challenges our models of what the close relatives of dinosaurs would have looked like,” Richard Butler, an author of the study said. “Dinosaurs were amazingly successful animals. It’s natural to want to know where they came from, and how they became so dominant. Teleocrater is hugely exciting because it blows holes in many of our classic ideas of dinosaur origins.”

The dinosaurs are considered to be so successful mostly because of their size and longevity. While we’ve only been around for a couple hundred thousand years (and don’t have too many more thousand left in us at this rate), these dinosaurs were able to dominate the planet for 150 million.

The teleocrater is so exciting, then, because it helps scientists figure out how dinos got so good at surviving.

Even though the Teleocrater did not directly evolve into the dinosaur (they went extinct before that could happen), it is now the oldest known branch on the dinosaur lineage tree.

Birds, dinosaurs, crocodiles and Teleocrater rhadinus all fall under the archosaurs umbrella — meaning they have similarly shaped noggins.

A long time ago, that group split into two evolutionary paths: one for crocodiles and one for birds and dinosaurs.

This new guy is especially intriguing because he was on the dinosaur path, but looks like a crocodile. 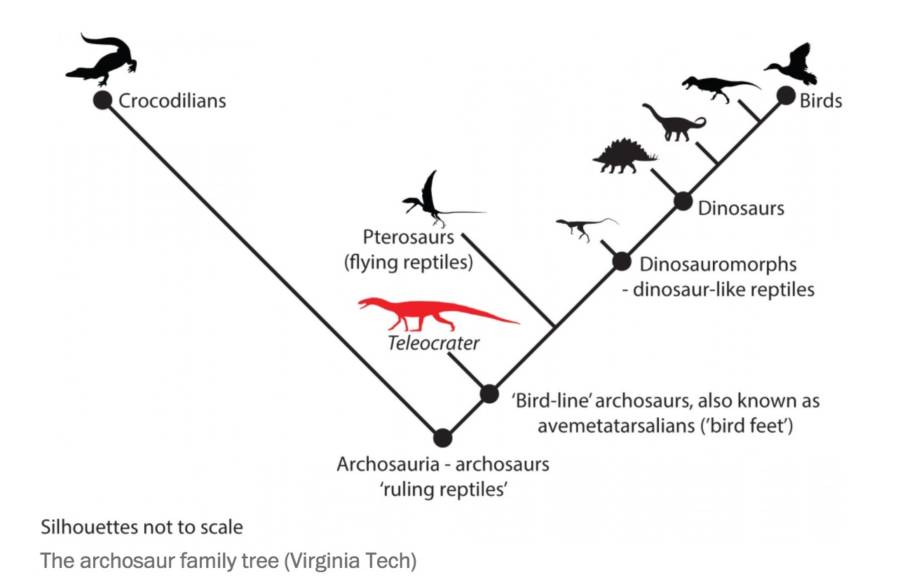 That tells researchers that characteristics believed to have originated with the dinosaur actually were around for awhile before their time.

The first Teleocrater fossils were uncovered in Tanzania in 1933 and hidden away in the Natural History Museum until another scientist, Alan J. Charig, dug them out of storage in the 1950s.

This isn’t the only groundbreaking prehistoric finding in recent months. In March, scientists discovered that dinosaurs originated in a completely different part of the world than previously believed and their family groupings need to be totally reorganized.

“It’s almost a one-two punch,” Sterling Nesbitt, who found the 2015 fossils, said of the new research. “It’s complicated the once-simple picture of how dinosaurs got their features.”

Next, learn about the fossilized dinosaur-like sea serpent recently found with a baby in its belly or the newly discovered human-sized dinosaur footprint that’s the largest ever found.