David Attie was a photographic unknown for decades. A dig through his home changed that. 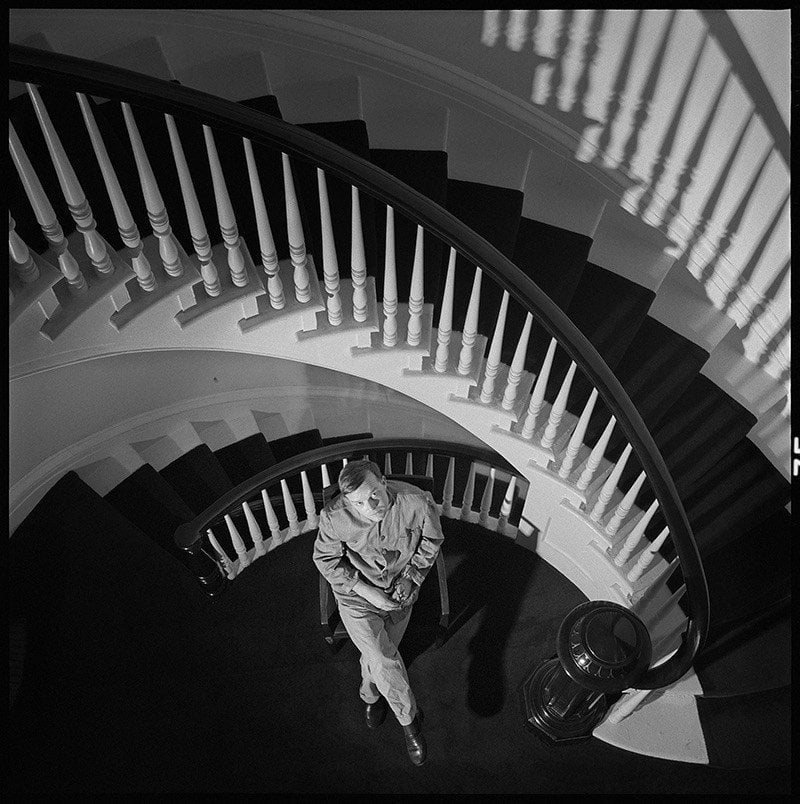 The long-lost photographs of high-ceilinged Brooklyn townhouses, foggy Manhattan skylines, and a young and serious-looking Truman Capote might have stayed hidden forever.

Tucked away in dust-gathering boxes, they sat alongside prints of W.E.B Du Bois, The Band, Leonard Bernstein, Ralph Ellison, and other famous faces.

They’re probably among the most intriguing prints of Capote in existence — the young writer defiantly staring out at the viewer, framed by the swirls of a spiral staircase — and they offer a rare glimpse at how the then deteriorating borough looked through his eyes.

But the more interesting character in this particular story may be the man behind the camera. 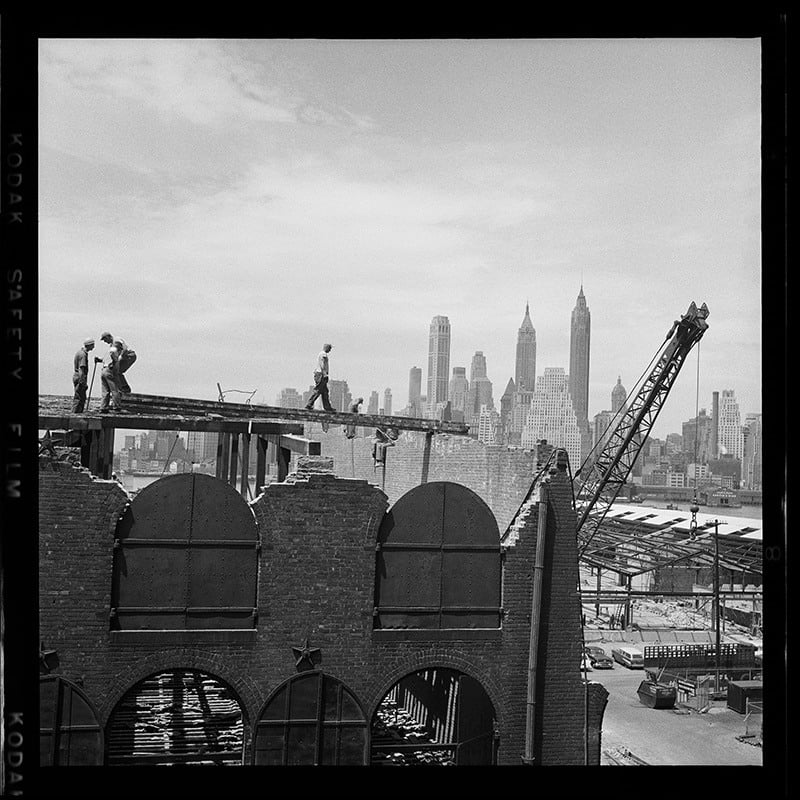 David Attie was a successful commercial photographer whose legacy is just now being reconstructed to fit the digital age. Thanks to his son, Eli, Attie’s career is now seeing a second act — nearly 40 years after his death.

It started when Eli, who has an impressive resume of his own in the creative field, was procrastinating on a screenplay.

His father had died when he and his brother were young, so Eli’s own knowledge of Attie’s career was fairly limited. Googling the long-gone photographer’s name, he was dismayed to find that everyone else’s was even more so.

The revelation was upsetting because, Eli explained, “at a time when you could claim notoriety for posting videos of kittens climbing out of cardboard boxes, my father and his work had all but vanished.”

He did find one blogger who had mentioned Attie in reference to illustrations from the 1950s. “And for now, that’s all we know about David Attie,” the post concluded.

Eli wrote back – a quick correction of a “historical omission,” as he put it — and thought that was that. But then a man contacted him on Twitter, hoping they might work together to bring Attie’s work back into the public eye.

“Why didn’t I think of that?” Eli wondered. 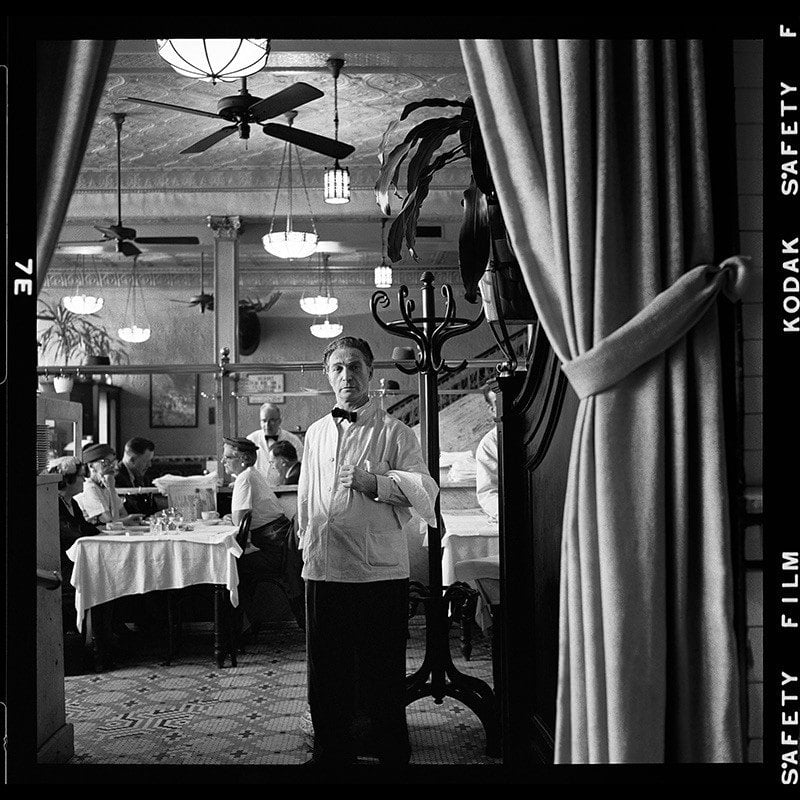 A few weeks later, a dig through Eli’s childhood Manhattan home — where his father once worked and where his mother still lives — revealed the trove of beautifully composed photos and Eli felt the hardest part of reigniting his dad’s career was likely over.

Most galleries and publications never wrote him back. And the ones that did were rude.

Stung by the industry’s rejection of his father, Eli persisted – confident Attie’s work deserved recognition, but unsure how to convince the critics. 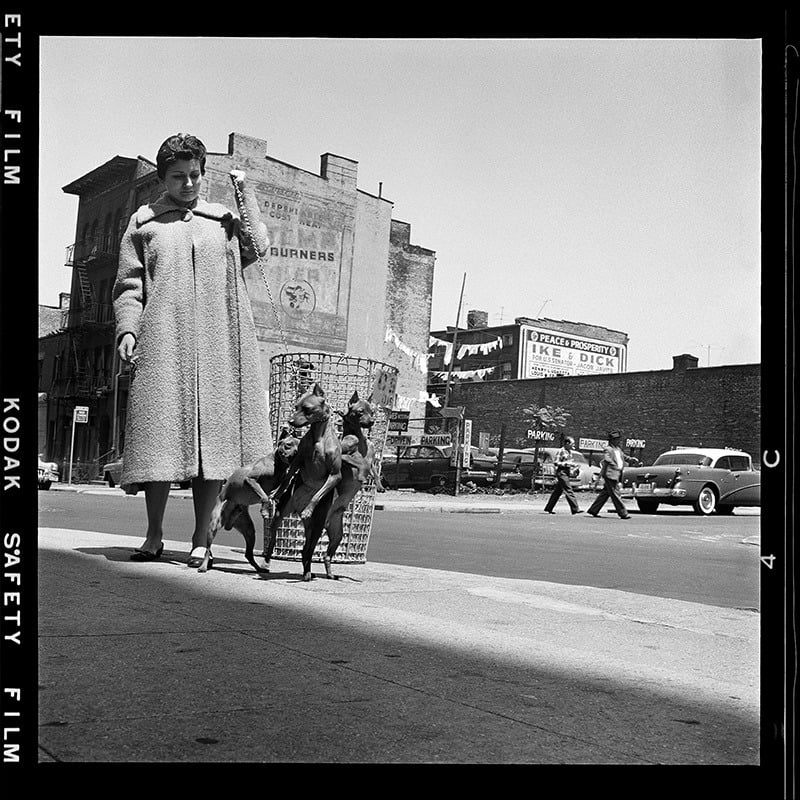 It was in the folder labeled “Holiday, Capote, A3/58,” that Eli found the key:

Capote leaning against the railing of a wide, tree-shadowed porch. Capote in a trench coat, gripping a wire fence that checkerboarded the Manhattan buildings across the river. Capote gripping his glasses and peering down disdainfully — a look that seems to epitomize how the notorious pessimist viewed the world.

Eli learned that the photos – taken in 1958 – had been shot to accompany the 34-year-old Capote’s essay for Holiday magazine, “A House on the Heights.”

Capote and Attie had originally met when Alexey Brodovitch, Attie’s famous mentor, had given his prized pupil the assignment of creating art for another Capote hit: “Breakfast at Tiffany’s.”

Capote clearly saw something in the young photographer, as evidenced by a letter he sent to Esquire magazine regarding his shots.

“When in New York I talked to you (or someone at Esquire) about the possibility of buying Breakfast at Tiffany’s,” he wrote to an editor. “I said I would not be interested if you did not use Attie’s photographs. Now, today, I learn that this promise is not being kept. That, instead, only 1 picture of his is being used. A picture, moreover, that I had never seen before, and which I hate.”

Still, the majority of the photos created to accompany both now-classic pieces never ended up in print.

They remained largely unseen until last year, when Eli collaborated with publishers to reprint Capote’s Brooklyn essay in a book, “Brooklyn: A Personal Memoir, With the Lost Photos of David Attie.” 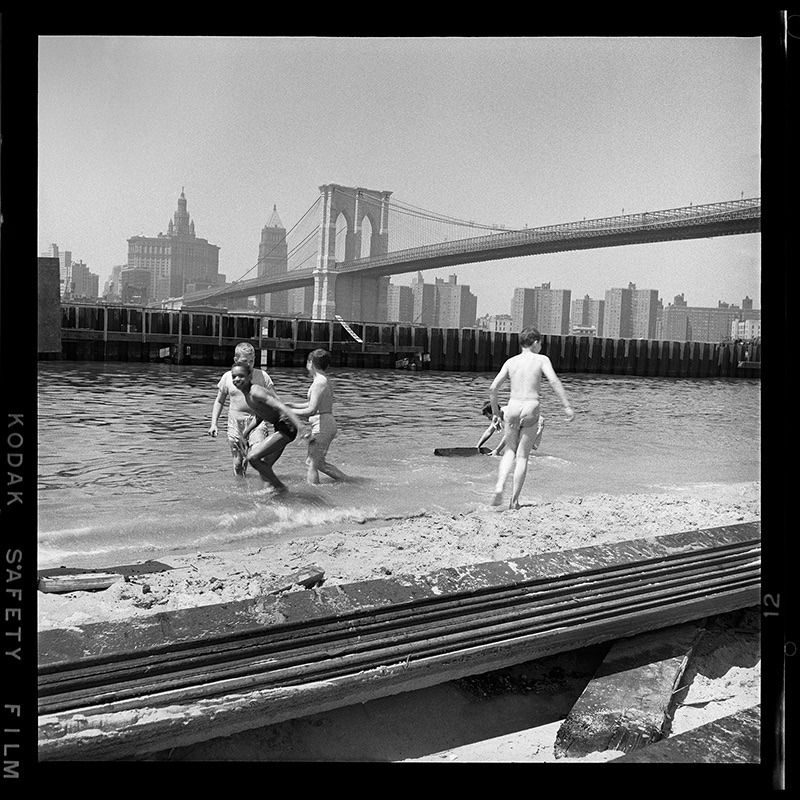 The book’s release caught the attention of the Brooklyn Historical Society, where an exhibition of David’s work is now on view.

Marcia Ely, the organization’s Vice President of External Affairs, said that she had always loved Capote’s words and was excited to see how Attie’s photographs brought them to life so well.

“I love the way that he describes the feel of a place that’s in decline,” she says of Capote’s essay. “The picture that he paints — now that we’re in 2017, you can’t help but contrast it with our experience of this neighborhood today. It’s so different. It was a time in between the high points.”

Where Brooklyn had once been a thriving scene for the middle and upper classes, the departure of manufacturing industries in the 1950s and the resulting mass exodus to the suburbs saw it slowly falling into disrepair. 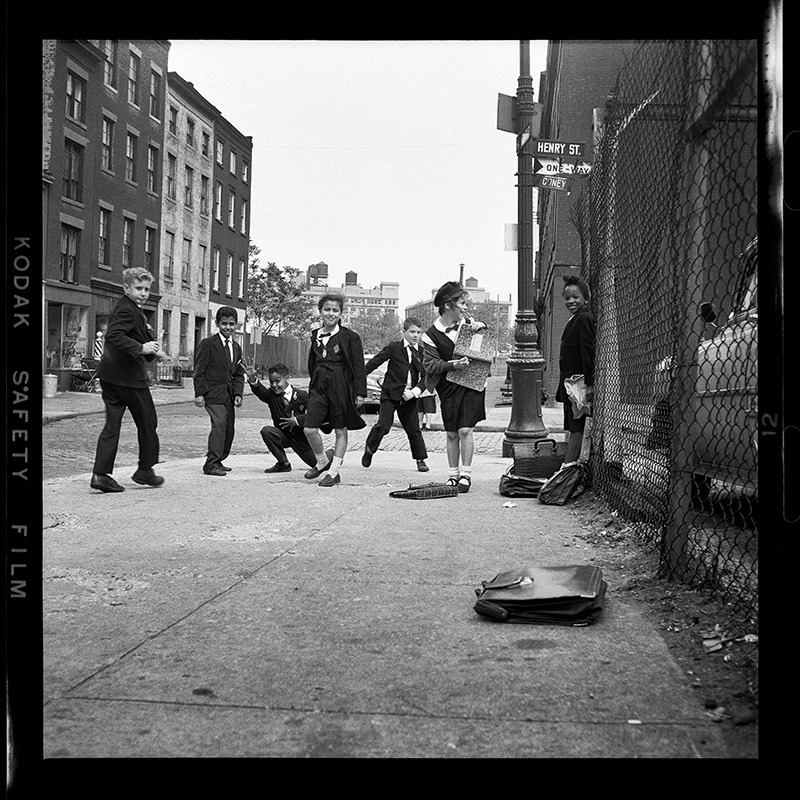 Still, artists and creative types like Capote remained defensive of the borough. “I live in Brooklyn,” he began his essay, “by choice.”

Perfectly capturing the heart of the neighborhood’s character, his images beg the question, “Who wouldn’t want to live here?”

There’s some garbage strewn about, sure. There are wire fences, bumpy-looking streets, and crumbling brick structures that seem even sadder juxtaposed against impressive Manhattan skyscrapers.

But there’s also the quirky antique salesman whose treasures Capote loved to peruse. There are children laughing on the sidewalk after school, splashing in the Hudson, peering into pet shop windows, and perched on brownstone stoops. 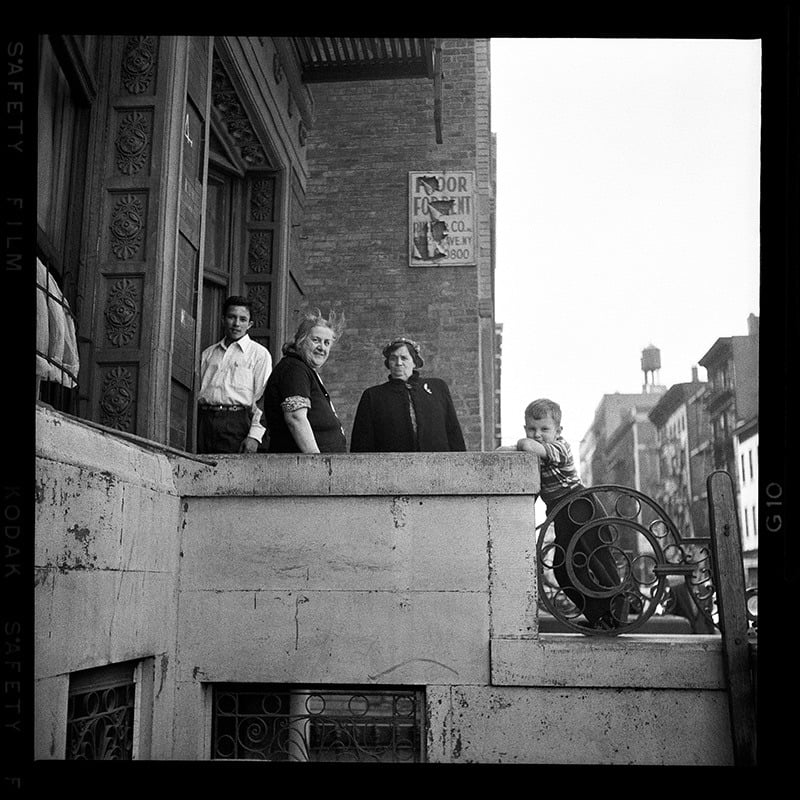 “It was this prime real estate with all sorts of colorful neighbors,” Eli said of Capote’s home.

W.E.B. Du Bois, who posed for Attie in his stately Brooklyn Heights home, was among them.

The Civil Rights leader’s presence in the collection is still a mystery to Eli — one he hopes to answer as more and more attention is paid to his father’s work. 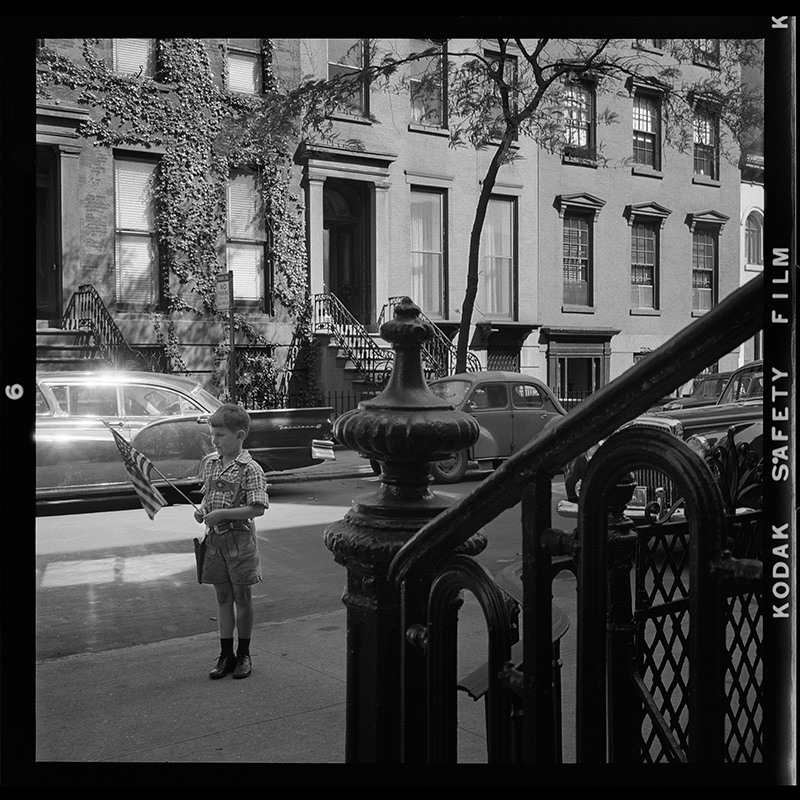 His photographs are being used again, alongside articles in top publications, with image credits giving him the permanent piece of internet he deserves.

Like any piece of history pulled into the digital age, the prints prompt a sort of dialogue between the present and the past.

Between the shiny-new-condo-lined, organic-farmers-market-filled Brooklyn of today — and the Brooklyn of the 1950s, which seemed doomed to a permanent state of deterioration.

Between a photographer whose work was forgotten — and his son who thought people should probably take a second look. 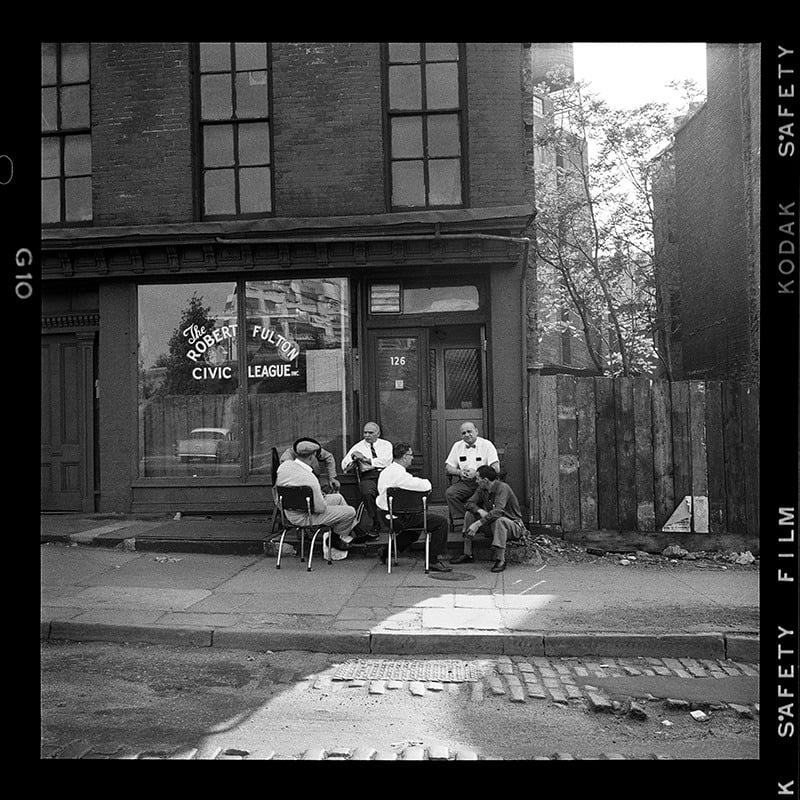 “I was so young when he died, I only saw him as a giant authority figure, you know?” Eli said. “I never got to see his frailty and insecurity and his artistic struggle. I feel like I’ve sort of been in that conversation with him now.”

For him and his brother, Eli said the process has been kind of like unearthing their DNA.

For the residents of Brooklyn — the place Capote described as “sad brutal provincial lonesome human silent sprawling raucous lost passionate subtle bitter immature innocent perverse tender mysterious, a place where Crane and Whitman found poems, a mythical dominion against whose shore the Coney Island sea laps a wintry lament” — it’s kind of like that, too. 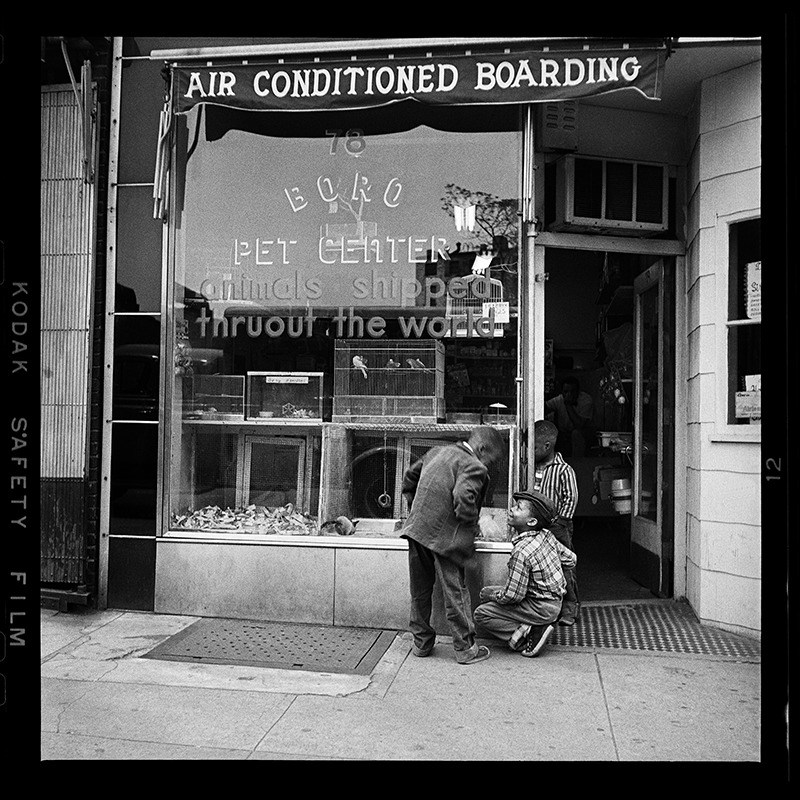 Next, take a look at 25 amazing Truman Capote quotes. Then, see what Brooklyn looked like before the hipster invasion.