This was Brooklyn before it became a haven for luxury condos and artisanal pickle shops.

During the forties and fifties, Brooklyn was home to manufacturing and industry that kept its economy thriving. But the boon of World War II was short-lived and soon after, companies left New York for cheaper cities while Brooklynites fled for safer neighborhoods and the city fell into an economic slump that would last for decades.

Drugs and mobsters ruled the streets throughout the seventies and eighties while Brooklyn fell into disrepair as the city cut back on basic services. Still, the borough remained a destination for a diverse set of immigrants from places like Russia, China, and Puerto Rico who intermingled with traditional Brooklyn populations of African-Americans, Italians, and Jews.

Below, we look at twenty-nine pictures of what Brooklyn looked like before it became a haven for luxury condos and artisanal pickle shops: 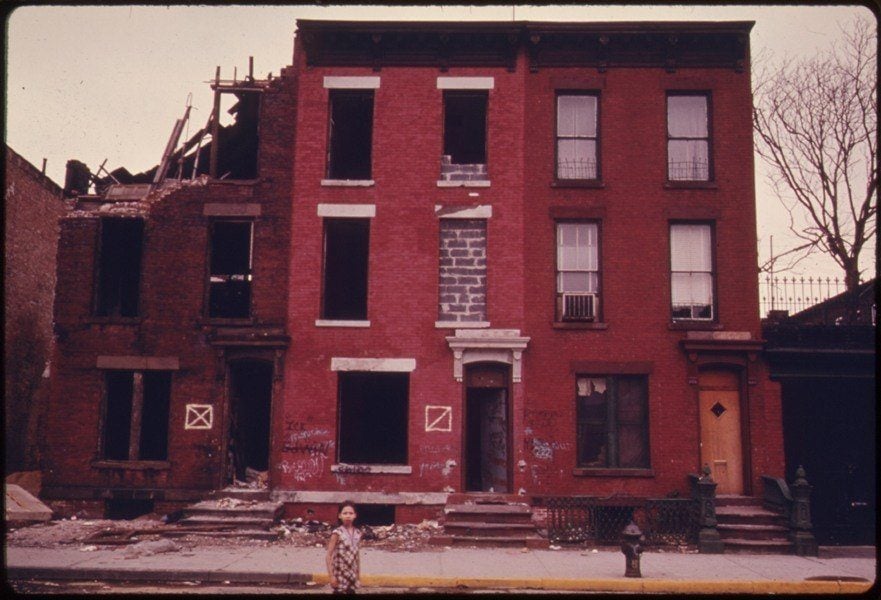 Brooklyn, 1974. Though Brooklyn thrived during World War II, the borough would soon experience a decades long struggle to find stability again. The closure of Brooklyn Navy Yards in 1966, which at the time employed nearly 11,000 people, only exacerbated the problem, leading to a sharp economic decline in the area.Documerica, Danny Lyon/U.S. National Archives 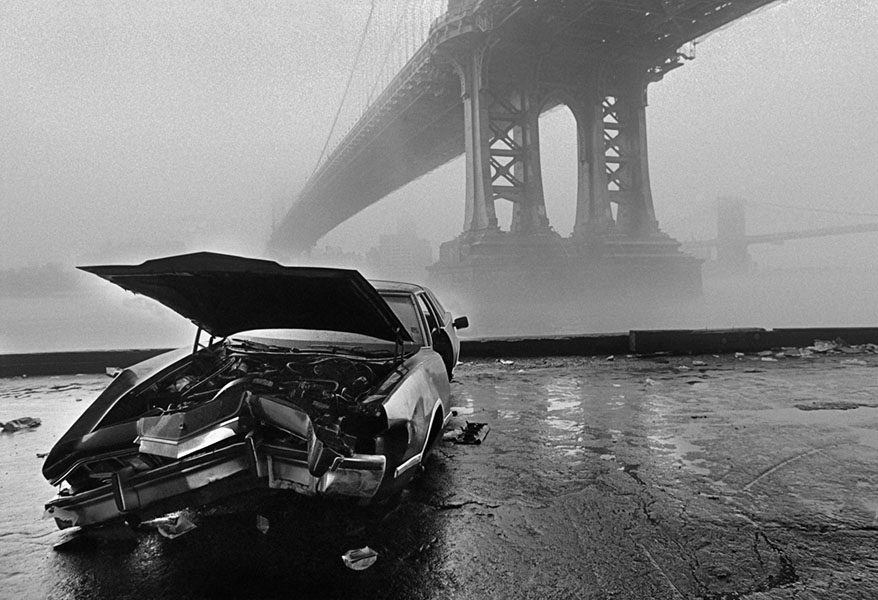 Brooklyn Bridge in the fog, 1986. Artist Allan Tannenbaum, who photographed New York in the seventies and eighties, remembers the "misery of long lines to buy gasoline." He wrote that conditions in Bed-Stuy were especially bad: "It seemed as if the entire infrastructure was in decay."Ferdinando Scianna 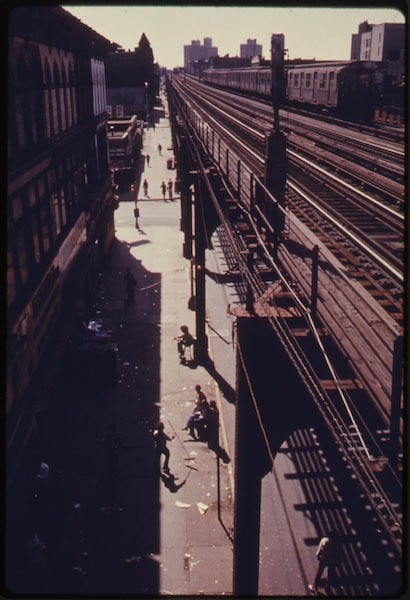 Bushwick Avenue, 1974. By the 1970s, New York was suffering severe fiscal deterioration—so bad that the city considered filing for bankruptcy. Correspondingly, New York went through a period of middle class flight in which Brooklyn lost more than 300,000 residents in ten years. According to Slate, 80% of the people who fled New York came from Sunset Park, Crown Heights, Bed-Stuy, Ocean Hill, and Brownsville in Brooklyn, as well as the South Bronx.Documerica, Danny Lyon/U.S. National Archives 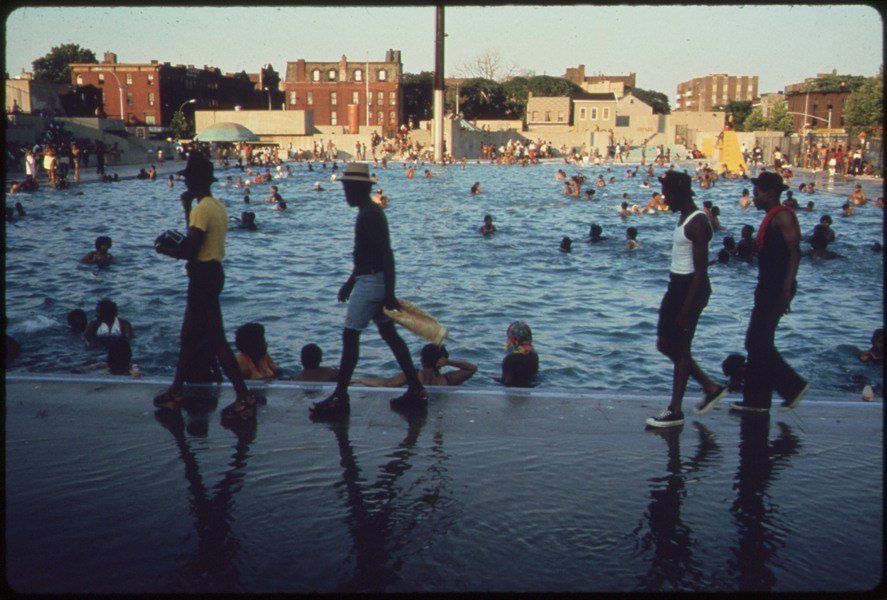 Kosciusko Pool, 1974. Since the mass exodus of the seventies, Brooklyn hasn't recovered to its previous population levels. But Brooklyn remained a haven for immigrants looking for a new life in America. In 1970 around 460,000 of Brooklyn's residents were foreign-born. By 2000, nearly 1 million were born outside of the U.S.Documerica, Danny Lyon/U.S. National Archives 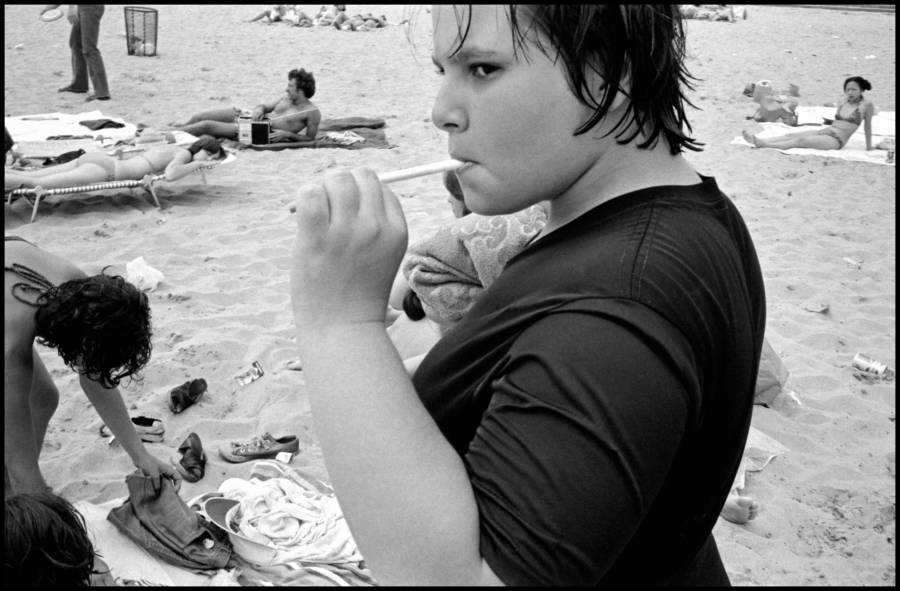 Rockaway Beach, 1978. In the 1970s, the Soviet Union relaxed their immigration policies, giving way for a new set of Russian immigrants who would call Brighton Beach and Coney Island their homes.Susan Meiselas 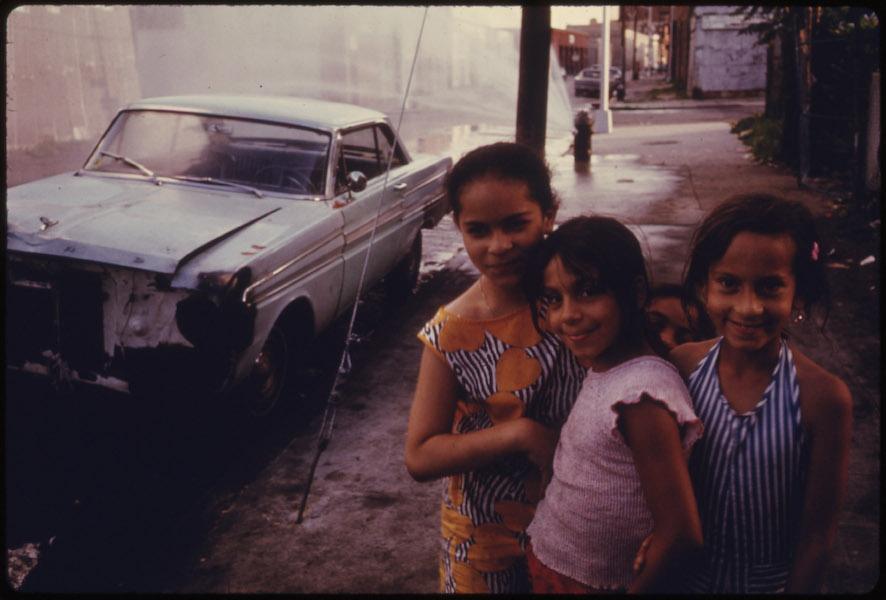 Bond Street, 1974. The Immigration and Nationality Act of 1965 helped open the doors to immigrants from outside of Europe. By 1970, 24,000 Puerto Rican people lived in Sunset Park, and since 1990, Dominicans have been the city's largest immigrant group, with many settling in Bushwick and Williamsburg.Documerica, Danny Lyon/U.S. National Archives 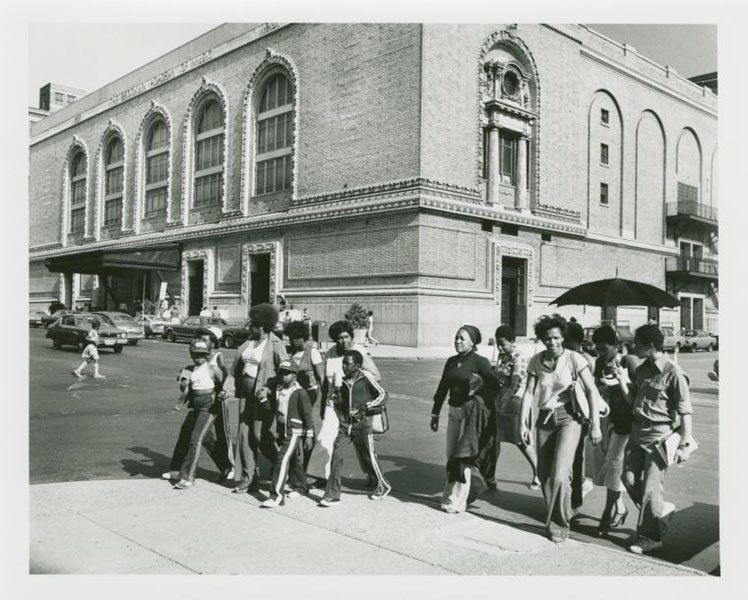 Brooklyn Academy of Music, 1978. New York has the largest African-American population in the United States. After the A-train extended service from Manhattan to Brooklyn, many African-Americans relocated to the Bedford-Stuyvesant area. The seventies saw an influx of affluent African-American families leave Brooklyn for Queens, while the poor were left behind to contend with Brooklyn's rapid deterioration. Dinanda Nooney/NYPL 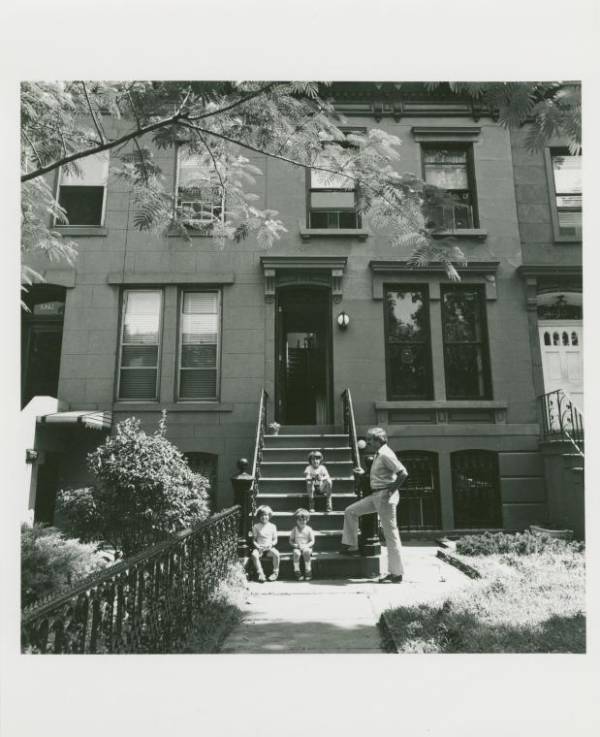 Carroll Gardens, 1978. Though neighborhoods of Brooklyn had always catered to the wealthy, the borough underwent a "Brooklyn brownstone movement" in the mid-1970s when urban activists refurbished homes in neighborhoods like Park Slope, Cobble Hill, and Carroll Gardens.Dinanda Nooney/NYPL 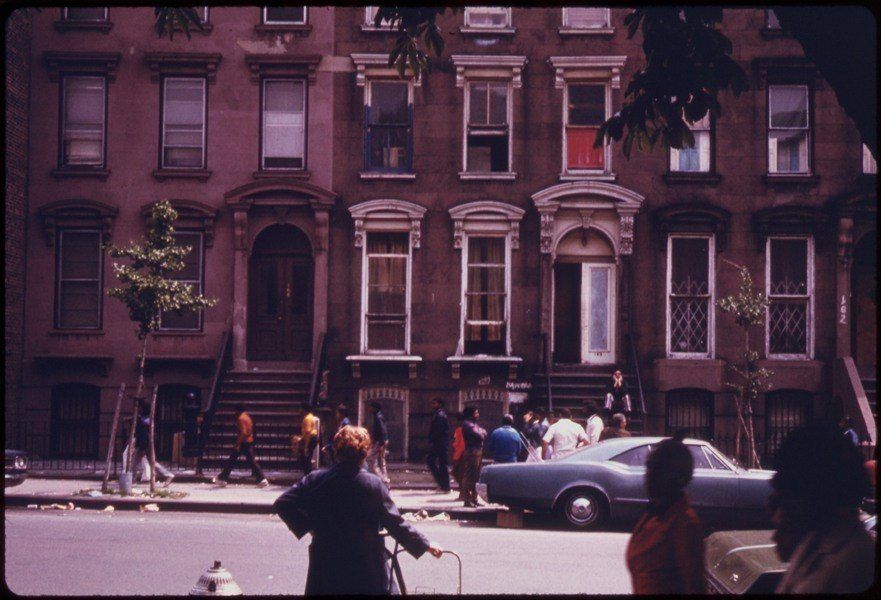 Fort Greene, 1974. In the seventies and eighties, Brooklyn experienced a catastrophic rise in crime rates, gang violence, and organized crime. In a proposed 1975 NYPD campaign, posters emblazoned with skulls entitled "Welcome to Fear City," would list advice for tourists visiting New York, including a plea to remain in Manhattan. Though the posters were never distributed, the sentiment remained: the outer boroughs were extremely dangerous. In 1973, for instance, 2,040 New Yorkers were murdered (compared to only 617 in 2014).Documerica, Danny Lyon/U.S. National Archives 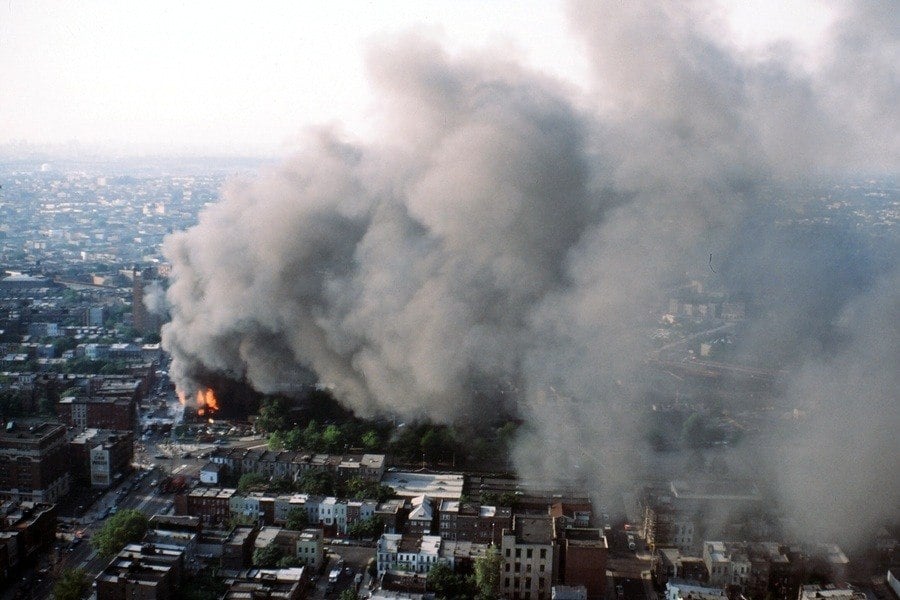 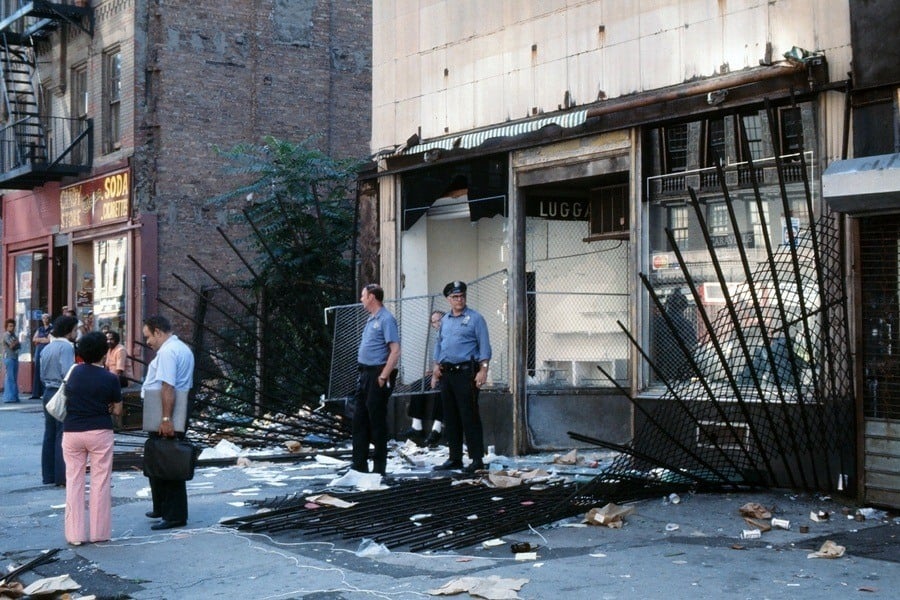 Brooklyn, 1977. The Bronx and Brooklyn were hit the hardest, as cars were stolen, businesses were looted, and buildings burned down. According to NY Daily News, looting took place along the "20-block stretch of Flatbush Ave. between Church and Lenox Aves. and Utica Ave." Robert R. McElroy/Getty Images 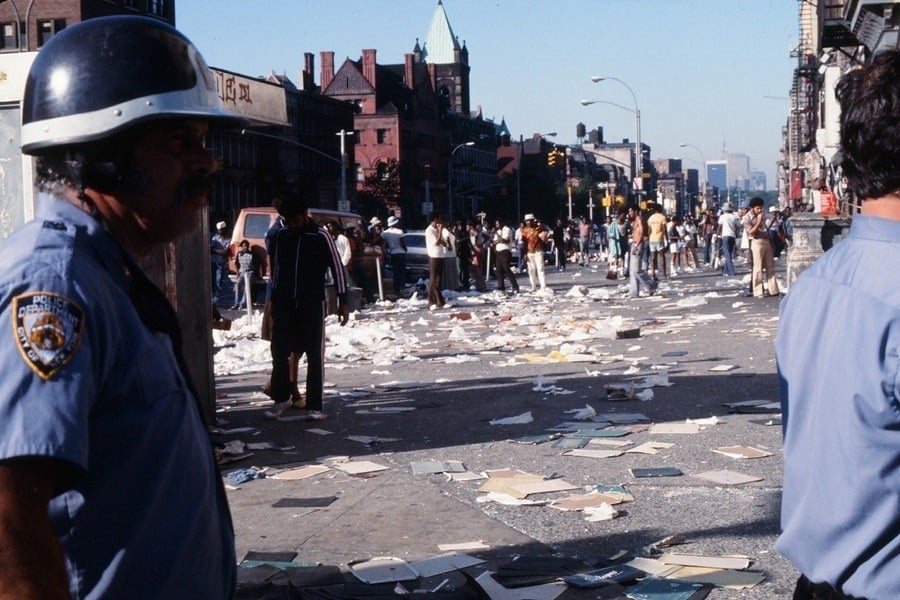 Brooklyn, 1977. The summer of 1977 in New York was already tense. The murderer known as Son of Sam (later identified as Brooklyn native David Berkowitz) was on the loose and causing widespread paranoia. He was finally arrested in August.Robert R. McElroy/Getty Images 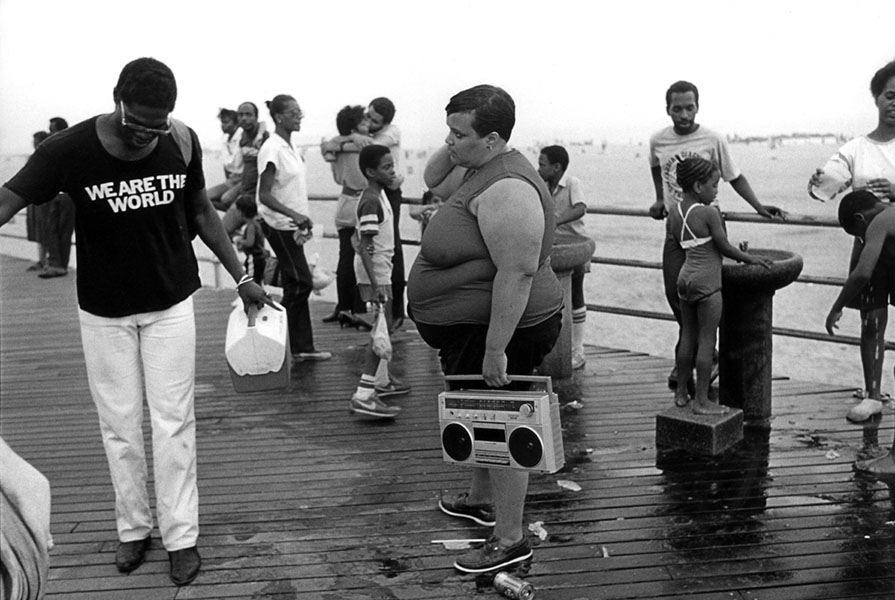 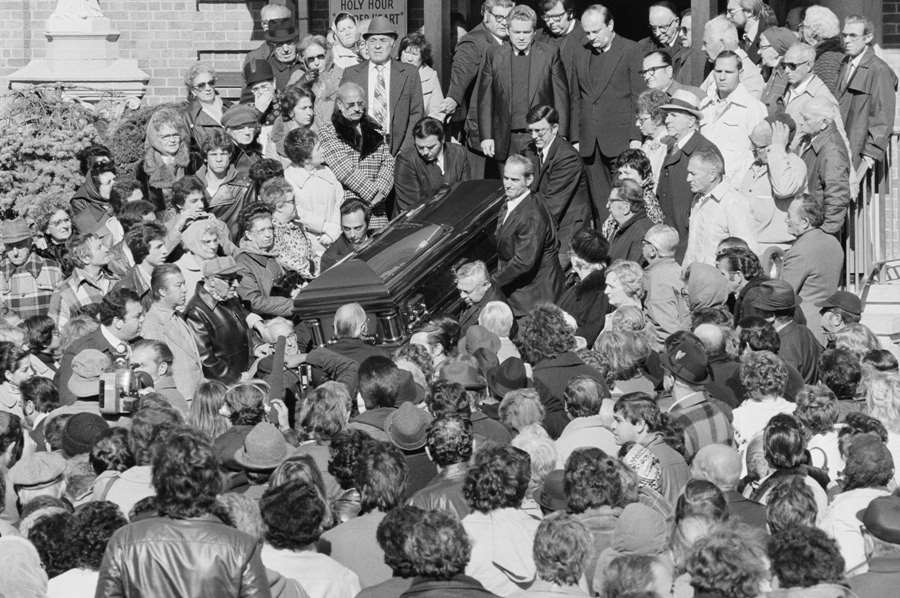 Mob boss Carlo Gamdino's funeral in Brooklyn; 1976. The mob had a strong presence throughout Brooklyn in this era. The mob boss Sonny Black controlled the Bonanno crime family from his headquarters on Graham Avenue in Williamsburg. Mob expert Christian Cipollini told Vice that when future mobsters came to America from Sicily, many of them settled in Williamsburg.Bettmann Archive/Getty Images 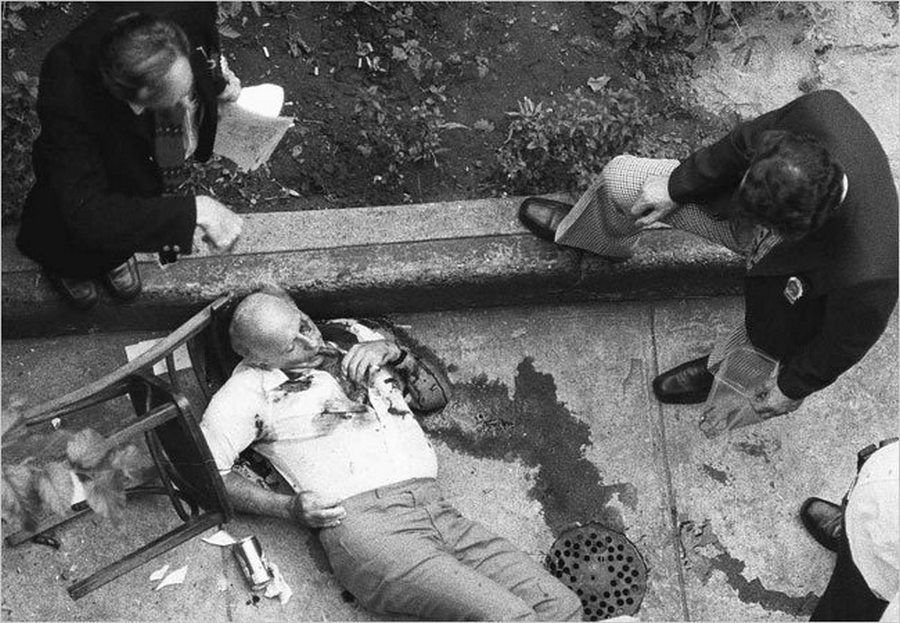 Bushwick, 1979. After becoming head of the Bonanno crime family in 1974, Carmine Galante controlled an expansive drug-trafficking empire. His power grab made him deadly enemies in New York's competing crime families, and he was assassinated outside Joe and Mary's Italian restaurant in Bushwick in 1979. 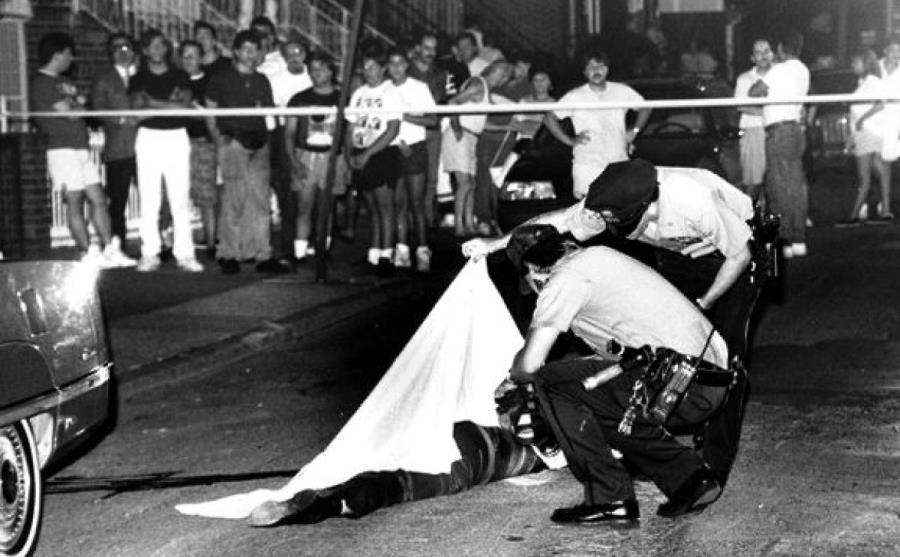 Bensonhurst, 1990. Mobster John Gotti also rose to prominence in the eighties. Though he was brought to trial many times, he wasn't convicted of a single crime until 1992, earning him the nickname 'The Teflon Don.' In one of his last acts as a mob boss, Gotti ordered the execution of Edward Garofalo in 1990 outside his home in Bensonhurt, Brooklyn, to keep him from providing information on the mob's criminal activities to the authorities. 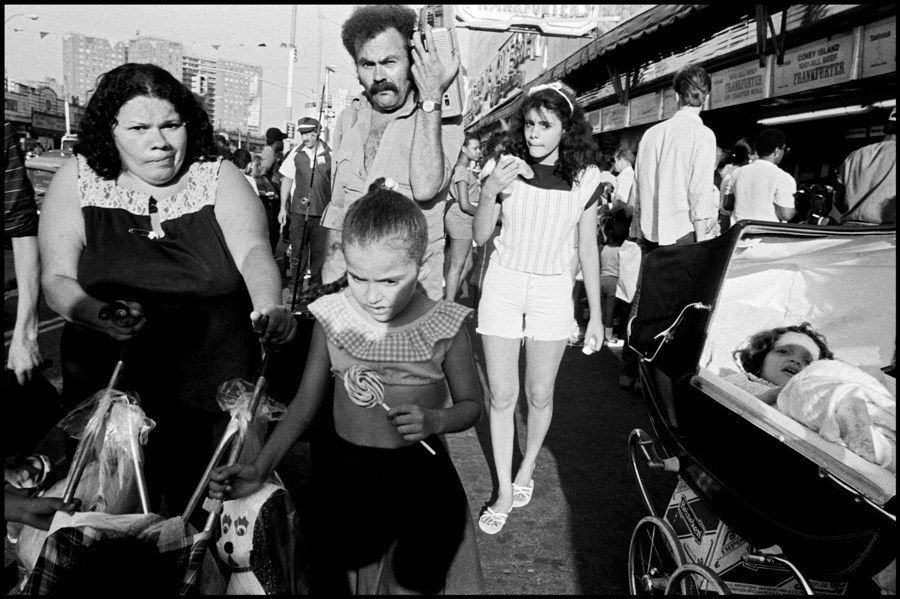 Coney Island, 1986. A family walks along the boardwalk. 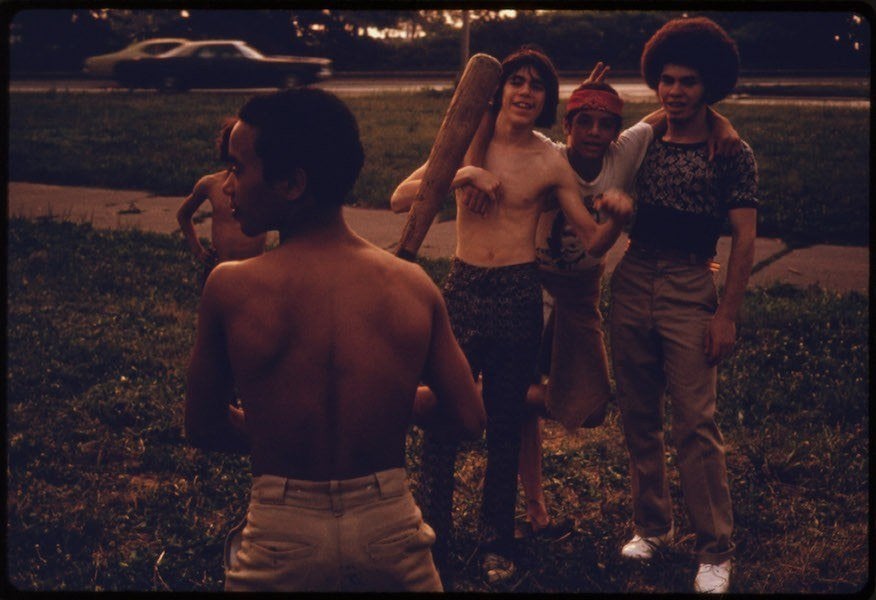 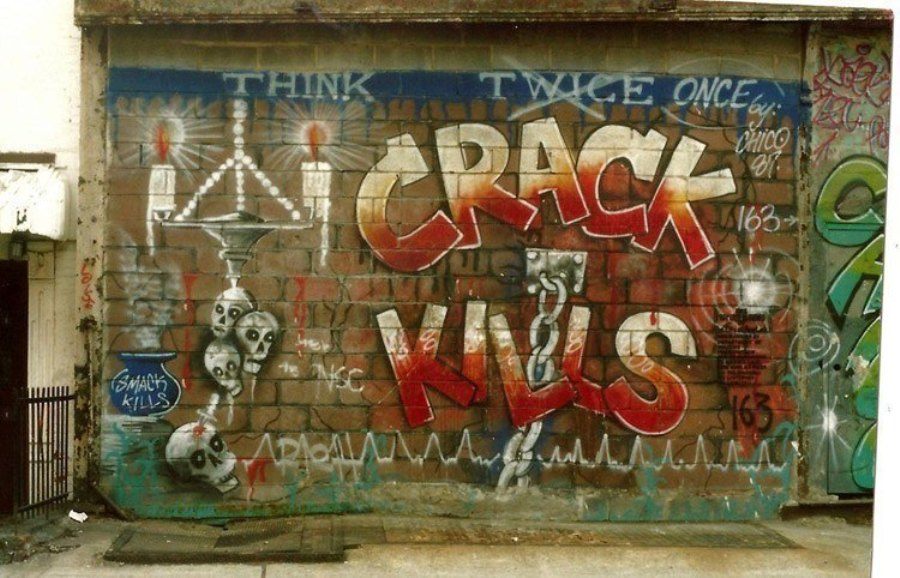 Graffiti offers a warning, date unknown. The 1980s also saw the start of the crack cocaine epidemic. Crack triggered a national crisis as entire communities succumbed to cycles of addiction and crime. By 1991, Lee Brown, New York's police commissioner at the time, told the Harvard Business Review that, "The crack epidemic has precipitated an explosion of violent crime, unlike anything we've ever experienced." 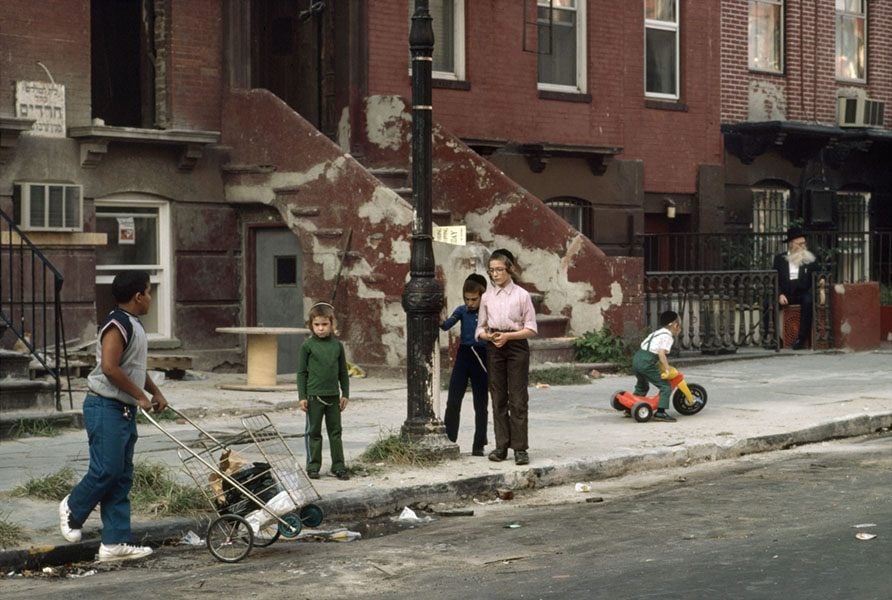 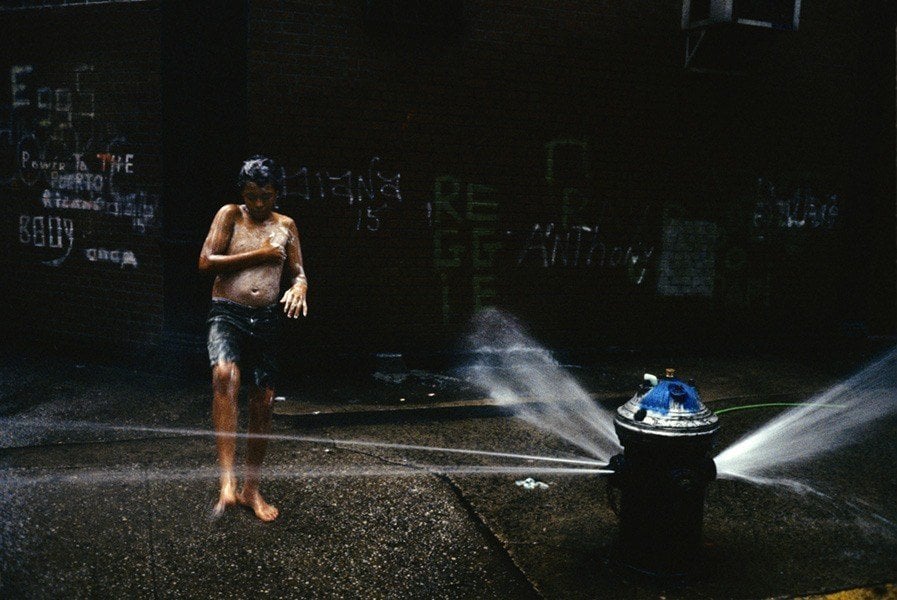 East New York. Kids at a fire hydrant during a heatwave, date unknown. 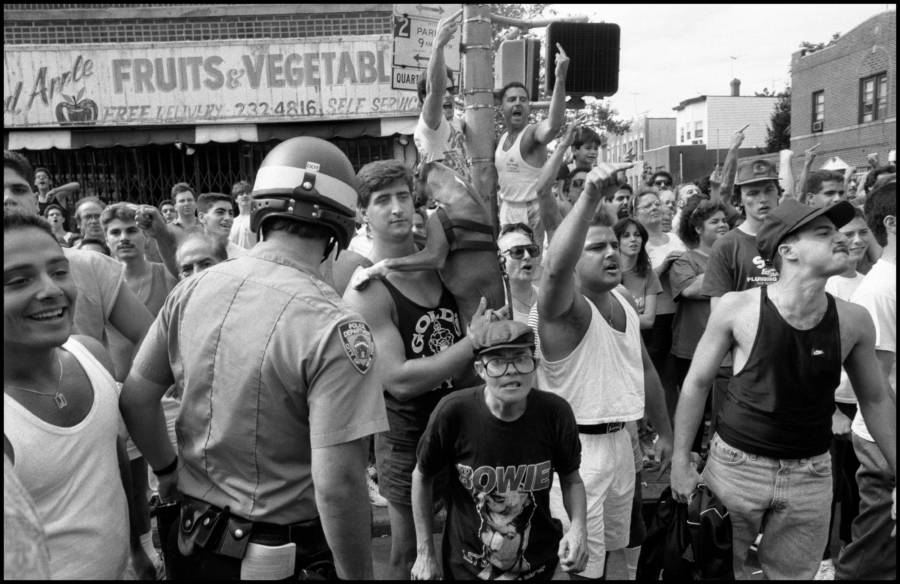 Bensonhurst, 1988. Racial divides between the neighborhoods of Brooklyn often resulted in tragedy. In 1989, African-American teenager Yusef Hawkins was shot to death in the predominately Italian neighborhood of Bensonhurst. Thousands of people mourned Hawkin's murder, and in the ensuring weeks, his parents, along with activist Rev. Al Sharpton, held demonstrations in the streets of Bensonhurst, where they were met with jeers and racial epithets. At the time, the LA Times reported that Bensonhurst had a disturbing history of racially motivated violence. One political worker told the Times that, "Brooklyn and Queens are extremely racist... It's a fear of the unknown, which seems kind of crazy in 1989."Eli Reed 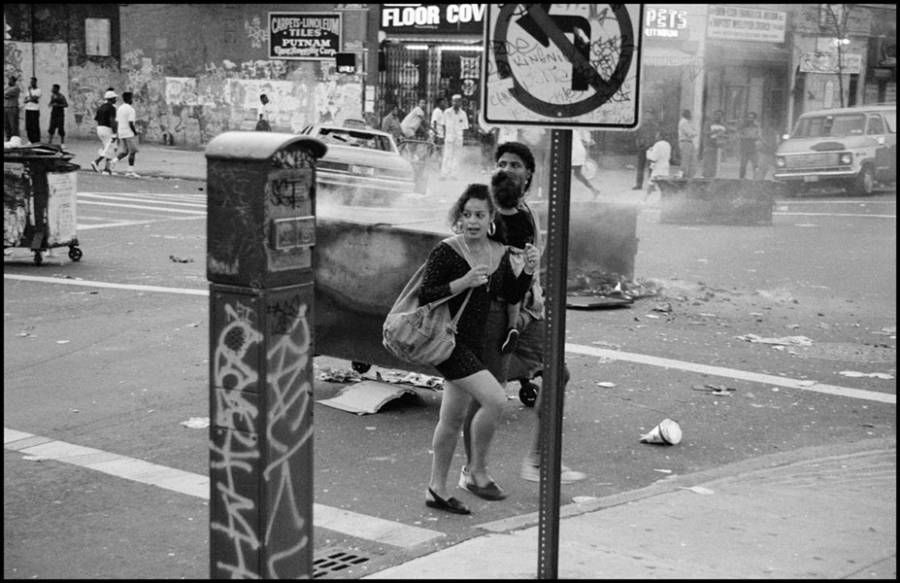 Crown Heights riot, 1991. Racial tensions spilled over into the nineties. On August 19, 1991, Yosef Lifsh, a Hasid, got into a car accident on his way to a funeral in Crowne Heights. His car crushed two African-American children, cousins Angela and Gavin Cato. An ambulance from the Hasidic run emergency service Hatzolah arrived to treat Lifsh, while the children were taken to Kings Country Hospital. Gavin died, though Angela survived, prompting rumors that the Hasidic ambulance crew had neglected the black children in favor the Jewish men, and that Lifsch was drunk (both untrue).Eli Reed 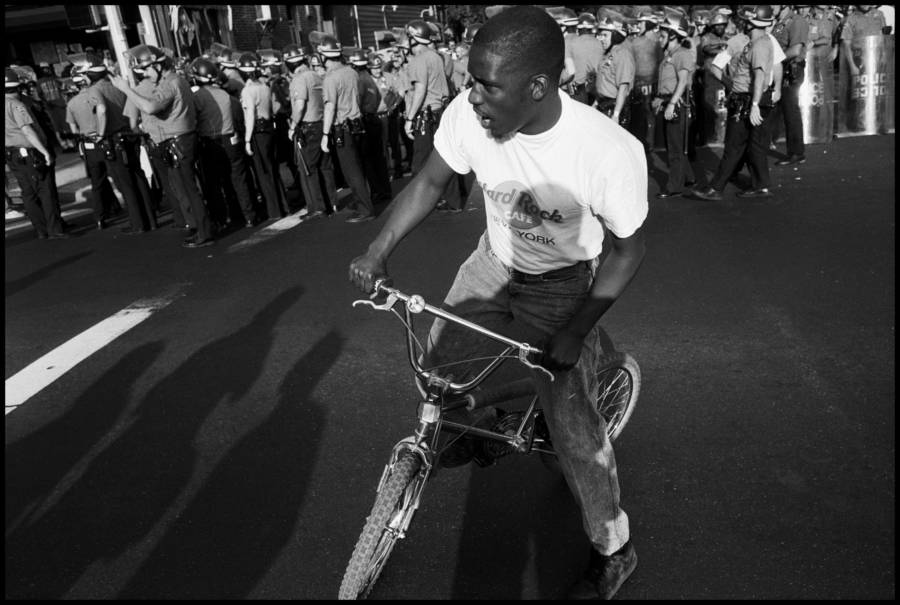 Crown Heights, Brooklyn; 1991. The accident sparked riots broke out throughout Crown Heights. Thousands of protesters marched through the neighborhood. Black residents felt that their Jewish neighbors had better police protection, while some teenagers targeted Jews with violence. Five blocks from the scene, Yankel Rosenbaum was attacked and stabbed four times by Lemrick Nelson. Violence continued in the neighborhood for three days before police finally restored order.Eli Reed 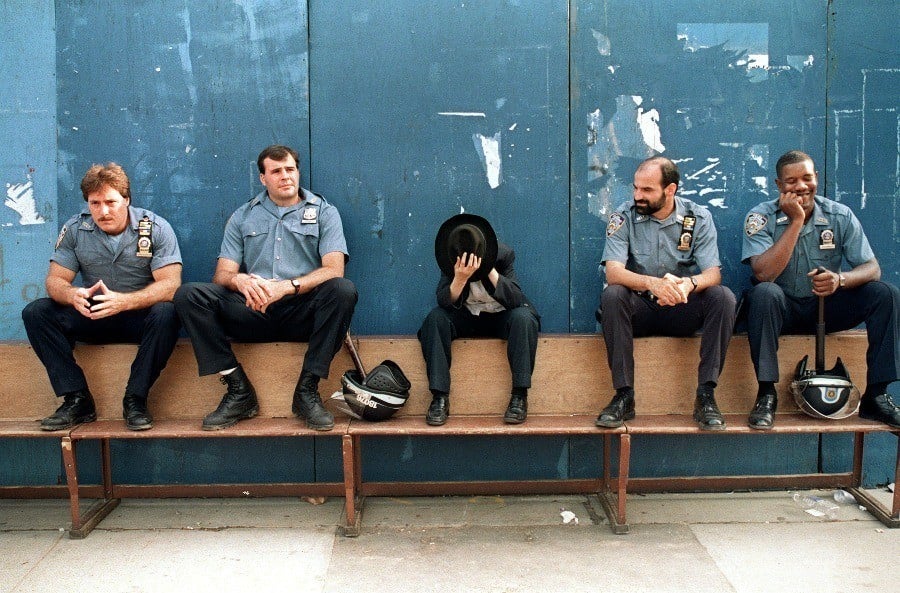 Crown Heights, 1991. Media coverage at the time focused on rising racial tensions throughout the borough, but after the incident, the Crowne Heights Coalition was formed to facilitate cultural understanding and improve police-community relations. Since 1991, then the Jewish population of Brooklyn has doubled, and a 2012 study found that 1 in 4 Brooklyn residents are Jewish. 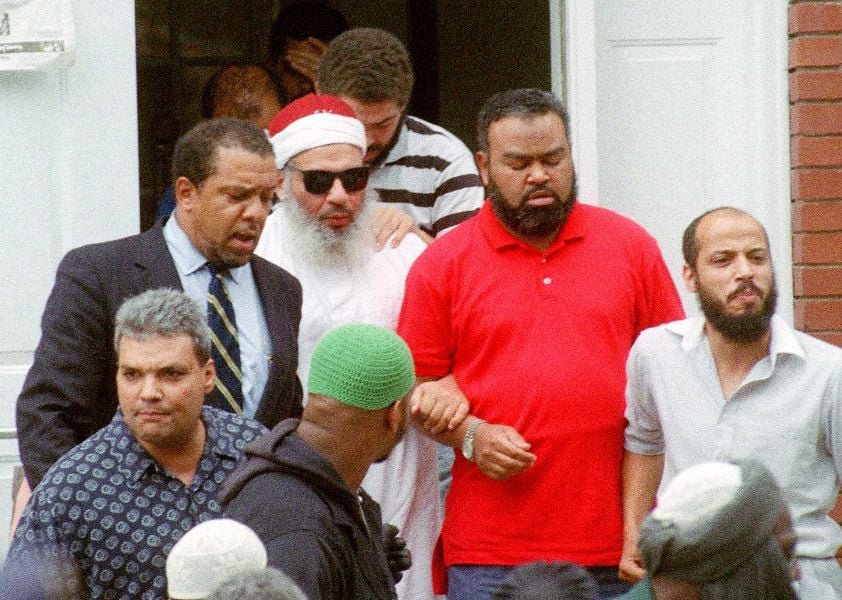 Abu Bakr Mosque, Brooklyn, 1993. Brooklyn was by no means restricted by local crime. On February 26, 1993, a truck bomb detonated underneath the North Tower of the World Trade Center. That summer, the blind Sheikh Omar Abdel Rahman was linked to Egypt's largest Islamic extremist fundamentalist group Jamaa Islamiyya. He surrendered to immigration officials on July 2. He was convicted of seditious conspiracy in 1995, and is currently serving a life sentence in North Carolina.Helayne Seidman/AFP/Getty Images 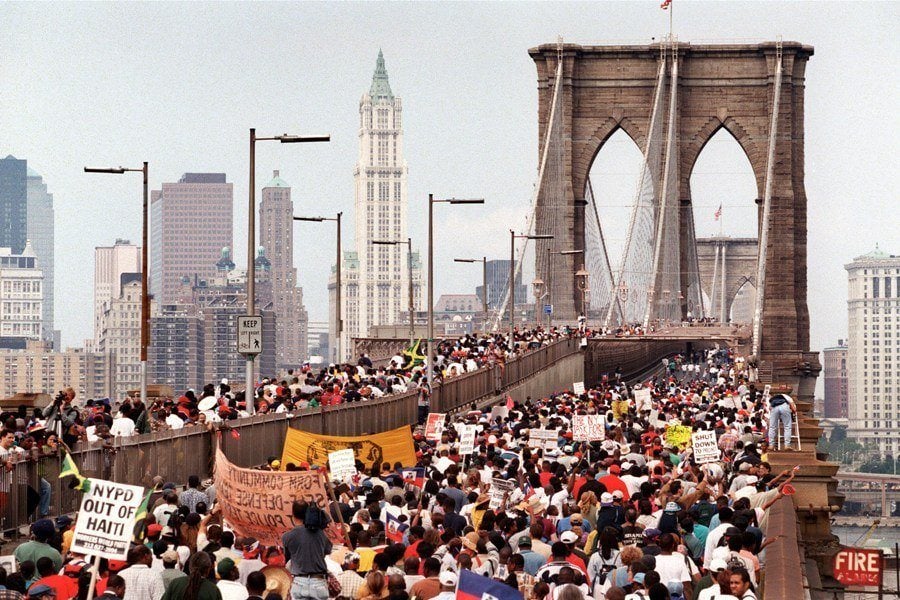 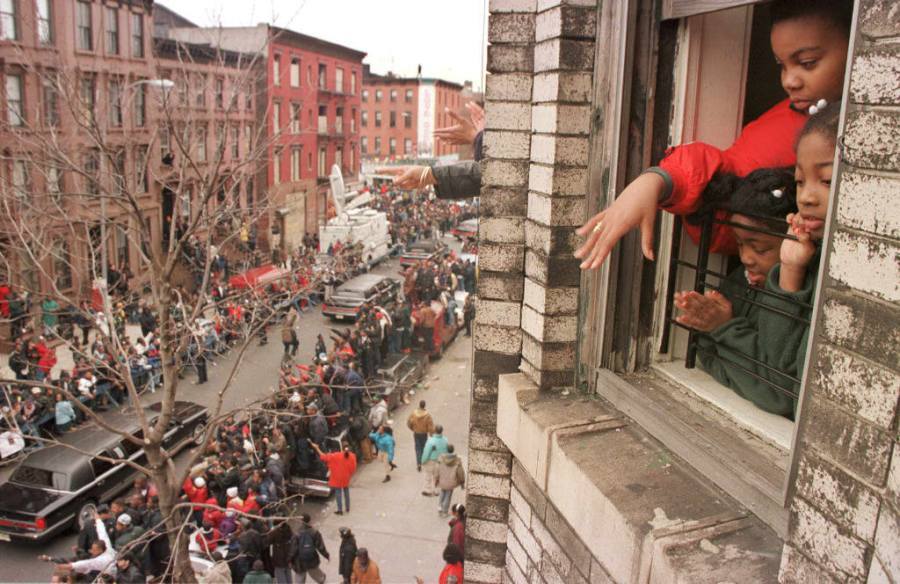 Bedford-Stuyvesant, 1997. No matter the problems they faced, Brooklynites honored each other, as mourners gathered to celebrate the life of rapper Notorious B.I.G on March 18, 1997.Jon Levy/AFP/Getty Images

Next, look at when the New York subways were the most dangerous place on the planet, then check out photos from 1970s New York.