"What does back to school have anything to do with getting guns?" said one local who snapped a picture of the gun store's promotion. 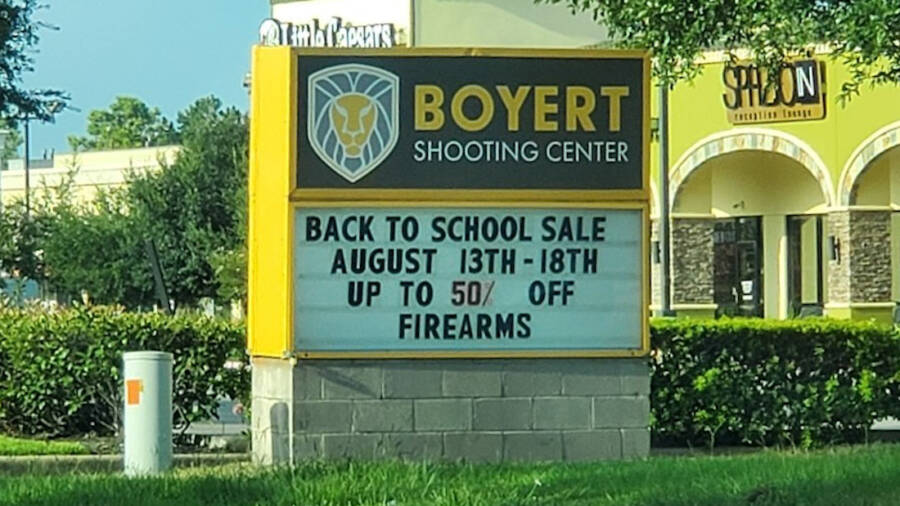 It’s only been a little more than a week since the back-to-back mass shootings in El Paso, Texas, and Dayton, Ohio, which together killed 32 people and injured 51 more. But for some, apparently, those tragedies are already an afterthought.

“BACK TO SCHOOL SALE AUGUST 13TH-18TH UP TO 50% OFF FIREARMS” read the Boyert Shooting Center’s sign in bold black letters. The half-off discount was emphasized in red.

This, only a week after the double shootings — one of which happened at a Walmart, while many families were presumably shopping for school supplies.

One of the firearms Boyert sells is the Barrett M82-A1 semi-automatic 0.50 caliber rifle. According to the manufacturer’s website, this assault rifle — which the company calls an “American icon” — “has been proven in combat in every environment.” Next to the gun’s description is a series of photos of American soldiers.

Boyert is offering customers a killer deal on this rifle in particular: $999.99 off the list price so that everyday Texans can get their hands on this piece of war machinery.

The gun store is also offering “crazy low prices” on other gun stuff like ammo and bags — which will certainly pair well with other back-to-school supplies like notebooks and markers.

While many news outlets have reported that the Texas gun shop is facing backlash for its poor taste in advertising, some people don’t seem to mind it at all — at least not those commenting on the business’s Facebook. 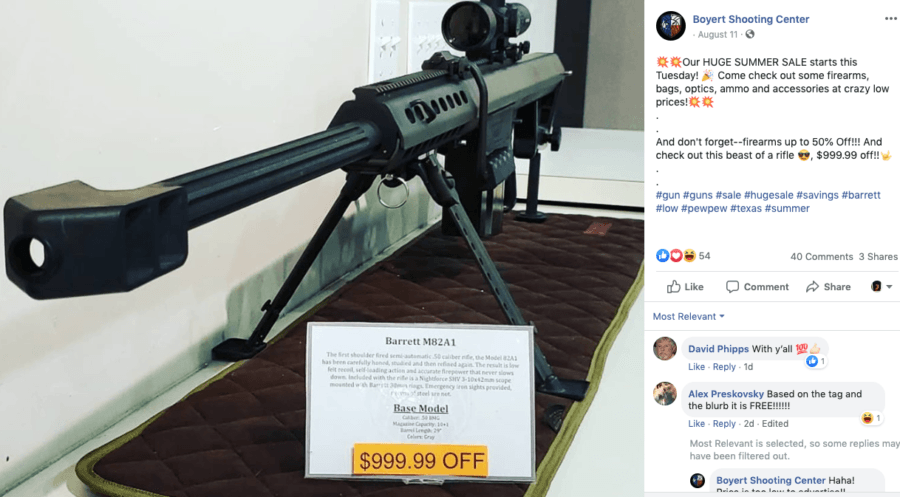 “With y’all,” said David Phipps, who ended his comment on Boyert’s Aug. 11, 2019 Facebook post with a 100-point emoji and a thumbs up. Another, Jon-Michael Vasek, commented “This sign is mild!,” referring to the store’s back-to-school promo ad.

Jay Tipton gave an insightful though perhaps a bit outdated argument, writing “This is so stupid! Remember the 16 and 17 year olds who went to WWII to fight and die for this country?”

But others see the sign’s timing as insensitive, if not downright offensive and endangering. As Simons incredulously asked, “What does back to school have anything to do with getting guns?”

Boyert’s response? They wanted to help Texas teachers — who in some districts are legally allowed to keep guns in their classrooms — protect themselves in the upcoming school year. The gun store’s statement read:

“We have friends and family who are teachers and our way of reaching out and saying thank you is by offering a summer long promotion of discounted training courses, firearms and accessories. A lot of Texans are not aware, but it is now legal to conceal carry in some colleges, and for teachers in certain school districts to conceal carry as well. We are wrapping up the program that we have been running since the beginning of June, with a huge sale to benefit everyone.”

It is unclear whether real teachers — like Simons’ husband, who says he sympathizes with students every time they are subjected to active shooter drills at school — have been receptive to the kind of “thank you” that the gun center is trying to go for. But surely there are better ways to thank hard-working educators besides offering them 50 percent off a combat rifle that they don’t need.

Next, read about the Texas law that allows college students to carry guns in the classroom. Then, read how a high school in Alabama suspended two students for a same-sex prom proposal.