Thelma Todd was one of early Hollywood's brightest stars — until she was found dead in 1935. Although her death was ruled a suicide, many believe she was actually murdered.

For years, the shocking death of the 1920s and 1930s film star Thelma Todd has loomed large as a fascinating piece of Hollywood lore.

Known as the “Ice Cream Blonde,” Thelma Todd was beloved for her comedic roles alongside the Marx Brothers in Horse Feathers and Monkey Business, as well as several other successful comedies. 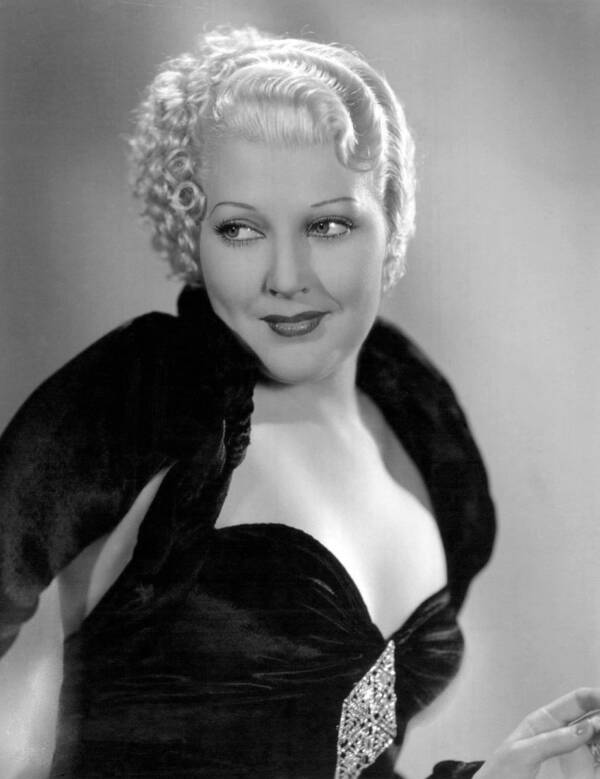 With her tragic death sparking debate about whether it was a suicide or murder, Todd’s demise proved to be an eerie foreshadowing of the media fervor that surrounded later Hollywood deaths, such as Marilyn Monroe.

Born Thelma Alice Todd in Lawrence, Massachusetts on July 29, 1906, she was known for being a bright and determined young woman.

After graduating high school in 1923, she enrolled in Lowell Normal College, which was a school for training teachers. But upon the insistence of her mother, she also entered beauty pageants and acting contests.

Thanks to her charm and good looks, Todd was successful on the pageant circuit, eventually winning the title of Miss Massachusetts. 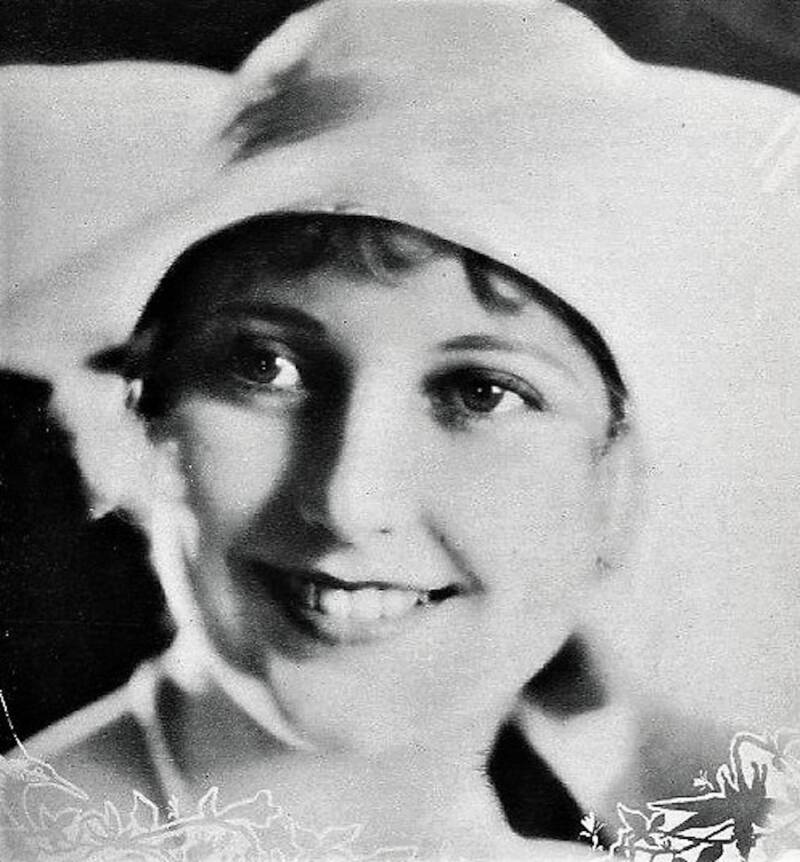 It was around this time that Thelma Todd caught the eye of some of Hollywood’s top scouts. They recommended that she attend the Paramount School for Junior Stars, run by the Paramount Movie Studio.

With thoughts of being a schoolteacher long behind her, Todd officially began her storied film career.

Beginning with silent films and eventually moving on to the “talkies,” Todd became well known for her comedic chops and her beauty.

By the end of Todd’s life, she had appeared in more than 100 feature movies and shorts, proving that her death was a loss for the growing film industry that undoubtedly lost a shining star far too soon. 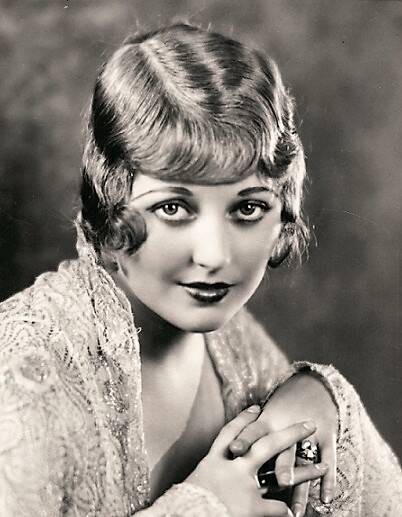 In addition to her successful film career, one of Todd’s other business ventures was her Malibu restaurant called Thelma Todd’s Sidewalk Cafe.

Known for attracting fellow celebrities and tourists alike, this glitzy and glamorous hotspot would go on to play a key role in the puzzle that would become Thelma Todd’s mystifying death.

The Death Of Thelma Todd 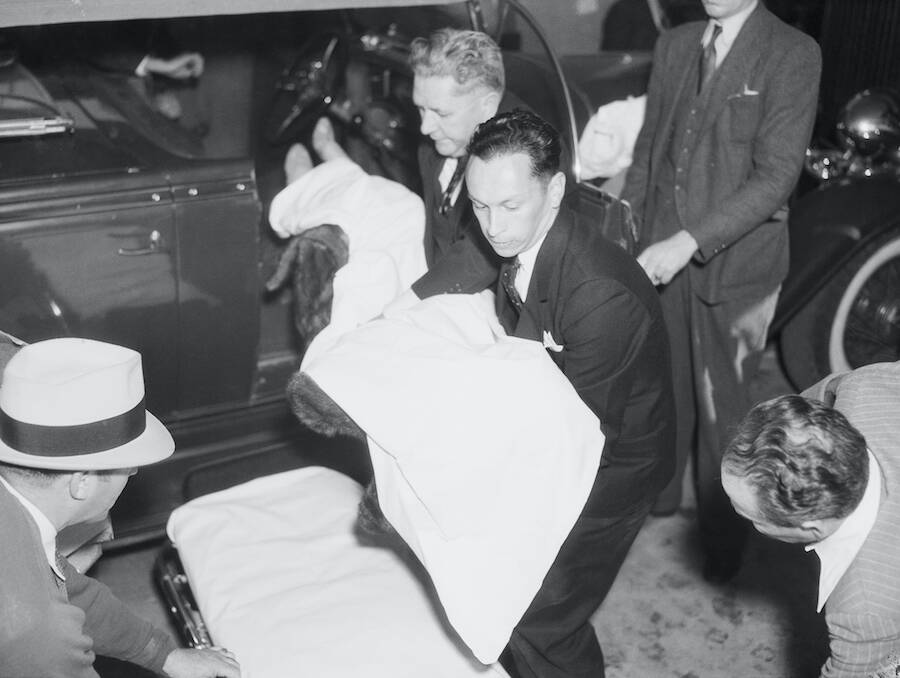 Getty ImagesInvestigators carry Thelma Todd’s body the morning after her death in 1935.

On the morning of December 16, 1935, Thelma Todd was found dead in her car by her longtime maid, Mae Whitehead, inside the garage that belonged to Todd’s business partner and occasional lover, Roland West.

“She was slumped in the front seat of her car,” Whitehead later told detectives. “Just bent over, her head to the left.”

The official cause of death was carbon monoxide poisoning, but the circumstances surrounding the starlet’s demise forced officials to dig deeper into the lives of Thelma Todd’s family, friends, and associates — some of whom may have had reason to want the blonde bombshell gone for good.

According to an article in the Los Angeles Times, published the day after Thelma Todd’s death, investigators had plenty of reasons to raise suspicions about the cause of her passing. The article read:

“The officers turned to probable reason for death by foul means. Within the past three months two men had been arrested in New York in connection with extortion notes and telephone calls received by Miss Todd, demanding $10,000 under penalty of death. But there were no signs of violence at the scene of her death.”

But even with threats of extortion looming over the actress, investigators and conspiracy theorists alike had many other paths to follow in the hopes of answering this question: Who killed Thelma Todd?

One particularly questionable presence in Todd’s orbit was her business partner and sometime-lover Roland West. West’s career as a film director had cooled considerably after his initial success in Hollywood.

While Thelma Todd’s Sidewalk Cafe was a hit with the show business elite, the restaurant was not a lucrative endeavor behind closed doors.

To make the details surrounding Todd and West’s relationship even more complicated, they lived in the same duplex above the restaurant, further muddying the waters of how deep their relationship truly was.

Further complicating things was the fact that West’s estranged wife Jewel Carmen also lived above the cafe. Additionally, Carmen was a co-owner of the restaurant, along with her ex and Todd.

While Carmen didn’t outwardly object to West being close to Todd, she reportedly threatened Todd when the restaurant began to lose money. 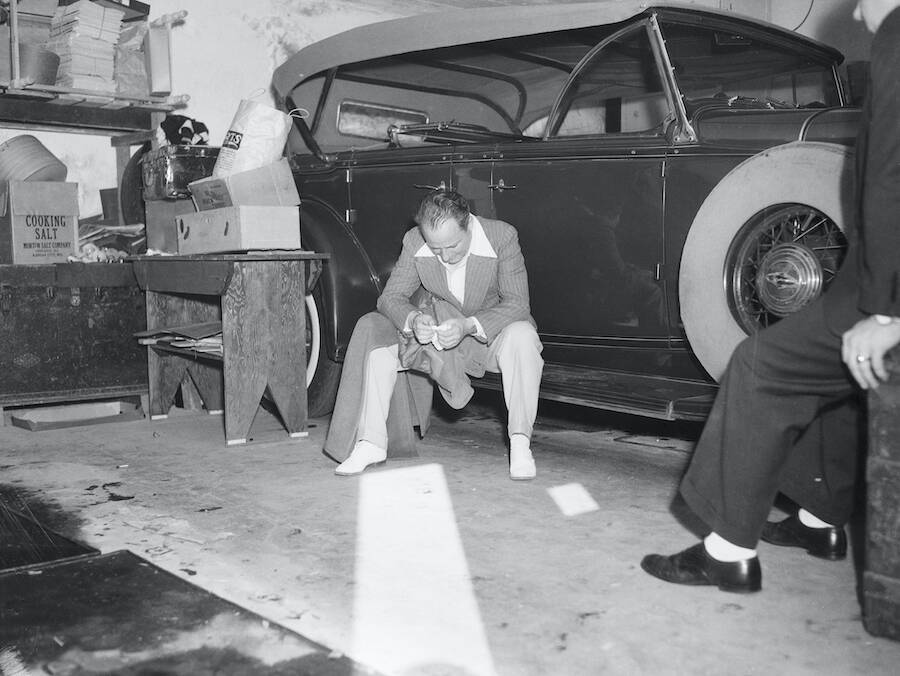 Getty ImagesRoland West mourning Thelma Todd after her death in 1935.

In addition to her strange arrangement with Roland West and Jewel Carmen, Todd was also linked to the infamous mobster Lucky Luciano. The two were known to have a torturous relationship. Luciano allegedly beat the actress and got her hooked on amphetamines.

On top of that, Luciano reportedly wanted Thelma Todd to let him open up a gambling casino in her restaurant. According to diners who overheard their conversations, Todd proved to be a hard sell, saying that she would allow the mobster to infiltrate her restaurant “over my dead body.”

Luciano’s alleged response? “That can be arranged.”

Yet another theory points to Todd’s ex-husband, Pat DiCicco, who may have felt humiliated after the divorce and possibly wanted revenge.

Some people have even been suspicious of Todd’s mother, considering that she was her daughter’s sole heir. Shortly before her daughter died, she apparently announced a plan to build a mansion — with no clear plan for how she’d pay for it.

However, despite all of these potential motives to murder Thelma Todd, a grand jury ultimately ruled the star’s death a suicide.

There is now little that can be done in an official capacity to alter this verdict — regardless of evidence that suggests foul play.

Thelma Todd’s Case Remains A Mystery To This Day

Fitting neatly in concert with the eyebrow-raising cast of characters in Todd’s life, another key piece of evidence would help suggest that her death by carbon monoxide poisoning was no suicide. As the Chicago Tribune put it:

“While a grand jury ruled that Todd committed suicide, it was unable to explain her broken nose, the bruises around her throat and two cracked ribs. Apparently, the grand jury thought Todd also beat herself to death.”

Like any mystery, the death of Thelma Todd revolves around a cast of over-the-top personalities that perhaps only Hollywood could produce.

And while anyone who was personally close with the star has long since passed away, there is no denying the fact that the life and death of the “Ice Cream Blonde” remains a head-scratching story to this day.

The world may never know what happened to Thelma Todd, but the perpetual interest in her case ensures that the search for answers will continue ever onward.

After this look at the unsolved mystery of Thelma Todd’s death, learn the tragic full story behind the death of Marilyn Monroe. Then take a look at the disturbing and strange death of James Dean.