The Self-Immolation Of Thich Quang Duc 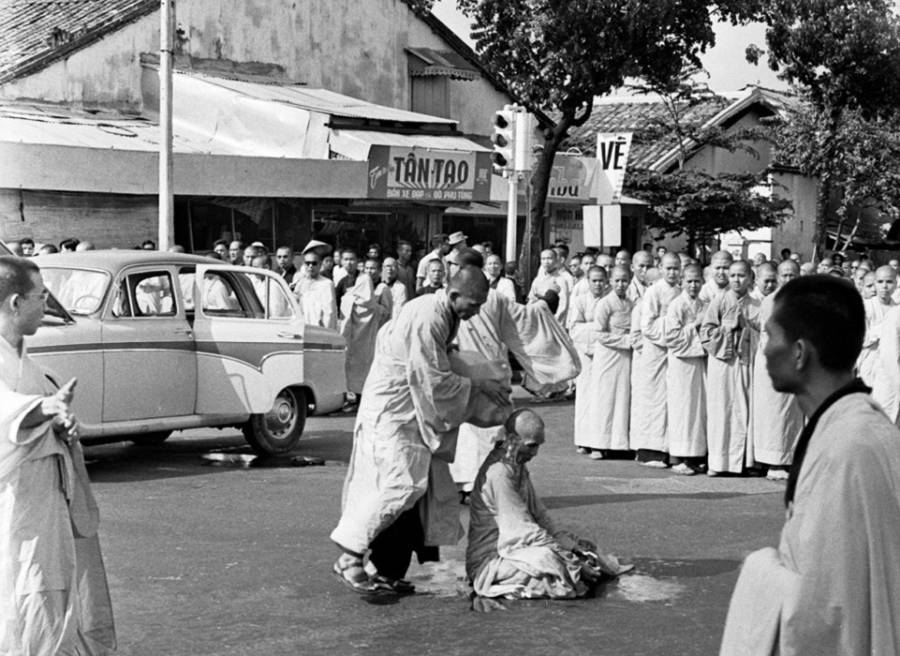 On June 10, Malcolm Browne, the Saigon bureau chief for the Associated Press, got word that “something important” was going to happen outside the Cambodian Embassy. He believed it.

Things in South Vietnam had been heating up since the massacre. The Buddhists had issued a list of five demands that called for religious equality and justice for the dead, and he knew that they were ready to do anything to make life better in South Vietnam.

Browne met Thich Quang Duc, a Buddhist monk who had spent three years living in total isolation as a holy hermit in the mountains of Vietnam. He followed him and a procession of 350 monks and nuns as they made their way into the center of the city and Duc sat down on a simple cushion in the middle of a busy Saigon intersection.

A five-gallon petroleum can was in Thich Quang Duc’s car. As he sat on the cushion, his legs crossed as if he were in deep meditation, one of the monks took it out and poured every drop over the monk’s head. Coated in gasoline, he remained the picture of serenity, rotating the beads around his neck and chanting a prayer to Amitābha Buddha.

“I realized at that moment exactly what was happening,” Browne would later say. He started snapping pictures as fast as he could.

Though no one had noticed it until then, Thich Quang Duc had been holding a match in his hand. The last words of his prayer left his mouth, and then he lit the match. He dropped the match onto his own robes and, in an instant, his whole body was engulfed in flames.

The fire department was trying to make its way through the crowd. They were shouting at each other desperately, arguing about how to put out the fire without killing Duc. But they would never get the chance to try. The monks laid down in front of their wheels, risking their lives to keep them from saving Thich Quang Duc’s.

Only one person was calm: Thich Quang Duc himself. “He never moved a muscle, never uttered a sound,” a witness recalled, even as his body burned. For 10 minutes, he was nothing but a burning match on the ground. Then, finally, his body collapsed.

“I don’t know exactly when he died,” Malcolm Browne later said. “He never yelled out in pain.”