A number of myths surround Victorian-era sanitary engineer Thomas Crapper, namely that he invented the flush toilet and that the word "crap" comes from his name. 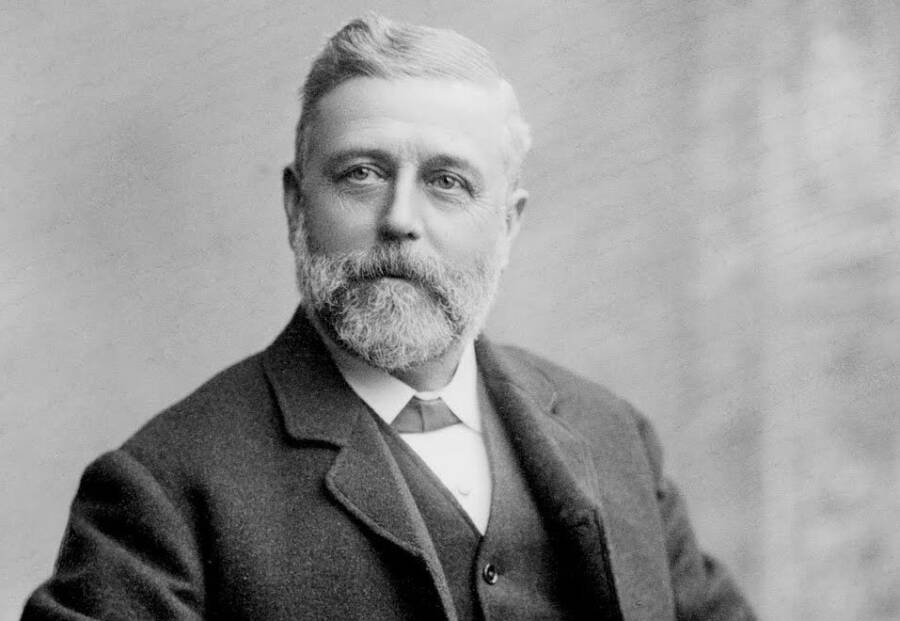 When American servicemen were stationed overseas during World War I, they reportedly noticed the word “Crapper” embossed on the cistern of nearly every toilet. Their return to the States made “crapper” a blanket term for toilets in general, with many assuming that sanitary engineer Thomas Crapper was the man who invented the flush toilet — but was he really?

Although the British engineer’s name is now synonymous with the product he once sold, Crapper stood on the shoulders of giants and merely refined various mechanisms of the flushing toilet — which had actually been invented 300 years before he was born.

Crapper had come of age and apprenticed as a plumber at a fortuitous time, however. Victorian Britain had suffered antiquated sewer systems for years when Crapper opened his sanitary equipment firm in 1861. Opening the world’s first bathroom showroom in 1870, he mass-marketed modern toilets to historic success.

His business Thomas Crapper & Co. was famously commissioned by Prince Edward to modernize palatial bathrooms. And crapper’s legend would grow to overshadow his predecessors, as he popularized the idea of installing toilets in homes — and sold them so well that his name echoes to this day.

The Life Of Thomas Crapper Before He Revolutionized The Toilet

While scholars still debate his precise date of birth, Thomas Crapper was baptized on Sept. 28, 1836. He was born in the Yorkshire town of Thorne. While his father Charles worked as a sailor, his older brother George would become a skilled London plumber who inspired the young Crapper to become his apprentice. 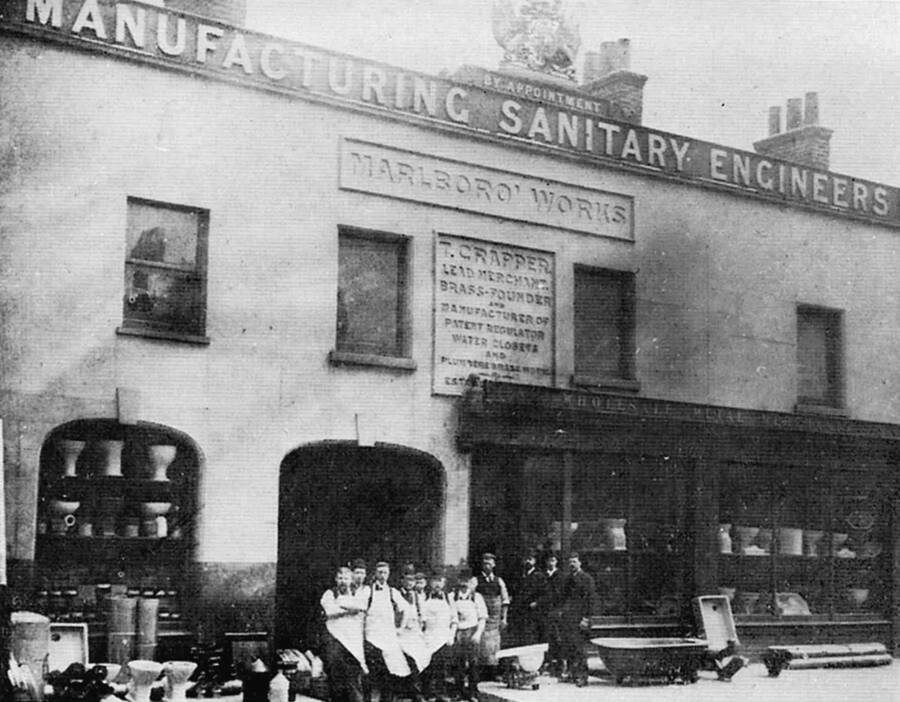 Thomas Crapper & Co.Crapper founded his company in 1861 and opened the world’s first bath, toilet, and sink showroom in 1870.

The 16-year-old began in 1853 and spent three years learning the tricks of the trade before venturing out on his own. He spent the rest of the decade as a journeyman plumber and garnered enough experience to last him a lifetime. After marrying his cousin Maria Green in 1860, he decided to form his own business.

Founded in 1861, Thomas Crapper & Co. began as a humble plumbing and sanitary engineering business. The brass foundry and workshop on Marlborough Road offered “sanitary specialities” such as the “improved lavatory basin,” and would grow along with Britain’s desire for healthier and more appealing bathrooms.

Crapper found remarkable success within the first year as Prince Edward granted him Royal Warrants to renovate the bathrooms of several palaces. While this was followed by severe tragedy when his 1-year-old son John Green Crapper died in 1863, Crapper’s career in sanitation equipment would only skyrocket.

The Success Of Thomas Crapper & Co.

In the 1860s, Sir Joseph Bazalgette constructed an ambitious new sewer system for London. Plenty of work fell into Crapper’s lap, with middle-class residents and shops across the city requiring plumbing for their new drains — and further grants to plumb at Westminster Abbey, Buckingham Palace, and Windsor Castle. 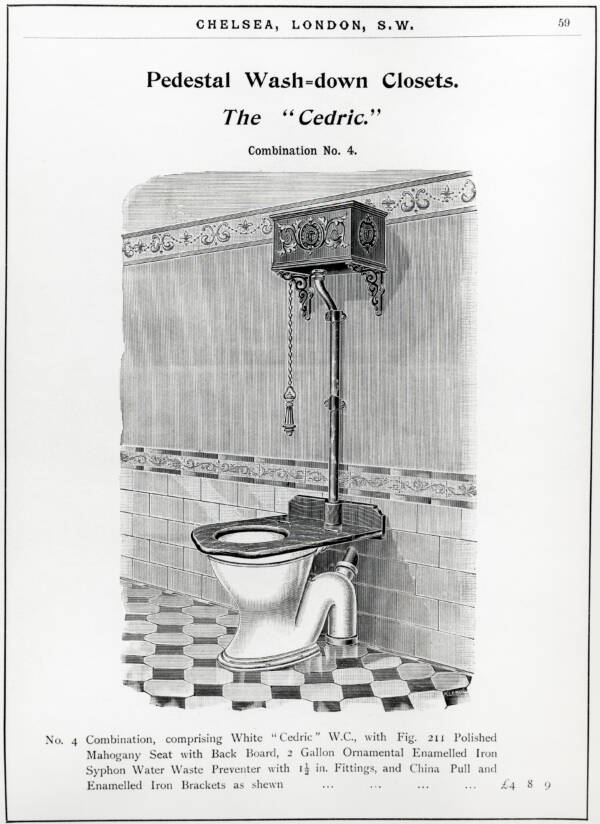 Many myths began to grow around Crapper, most foundational of which was the legend that he had walked from Thorne to London to become a plumber at age 11. Some also began to whisper that he had been knighted by the Queen, which was just as untrue.

When Crapper opened the Marlboro Works showroom in 1870, it was considered scandalous to put such private matters as functioning toilets on public display. Nonetheless, customers being able to try out their wares saw the flushing toilet grow nearly ubiquitous during the following two decades.

While satirist Wallace Reyburn popularized the lion’s share of Crapper myths with his 1969 book Flushed with Pride: The Story of Thomas Crapper, the titular plumber had certainly made history. In addition to founding the world’s first bath, toilet, and sink showroom, Crapper held a total of nine patents in his life. 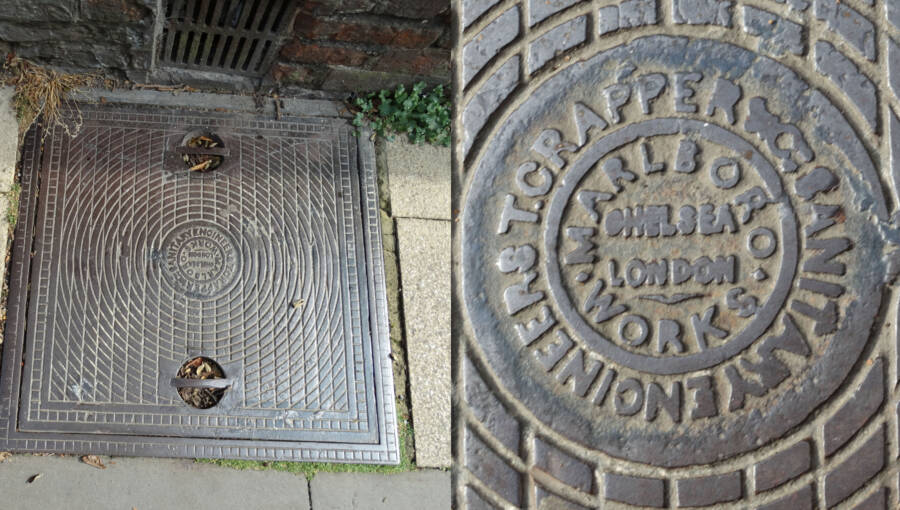 Furthermore, Crapper’s work helped eradicate the stigma that indoor toilets were unhygienic — thus vastly contributing to the sanitation of London. While “crap” had been a term for “rubbish” long before he was born, it’s not implausible that Crapper’s widespread toilets helped popularize the phrase in post-war America.

Ultimately, Thomas Crapper suffered the death of his wife in 1902 before retiring two years later. He handed his company off to his nephew George and his partner Robert Marr Wharam, and had a brief retirement at his Anerley home at 12 Thornsett Road — where he died of colon cancer on Jan. 27, 1910.

While his remains buried at Elmers End Cemetery in London are long gone, the man himself is annually remembered on Thomas Crapper Day — which falls on the date of his death to celebrate his work.