Who Invented The Toilet? Inside The Surprisingly Complicated History

While Thomas Crapper gets most of the credit due to his 19th-century innovations, the real story of who invented the first flush toilet is much more controversial than most people realize. 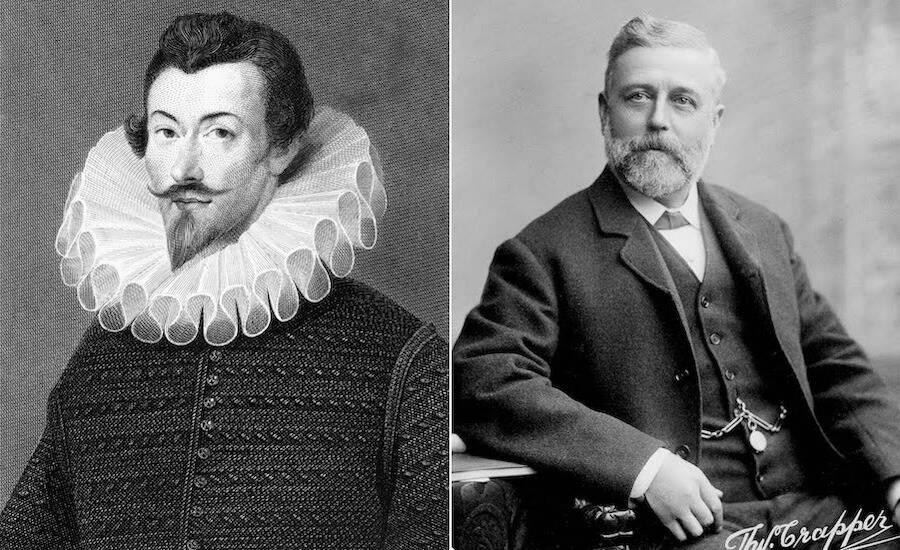 The modern world has provided us with many conveniences that are easy to take for granted. From antibiotics to air-conditioners, each has a long and rich history of innovations made by scientists and pioneers whose names go widely overlooked. Perhaps more than any other invention, modern flush toilets might be the easiest everyday convenience to take for granted — but who invented the toilet?

The answer is more complicated than you may think.

Countless civilizations developed their own methods of waste removal long before our own. From the Mohenjo-daro of the Indus Valley in 2800 B.C.E. and Ancient Rome to the medieval toilet of the Middle Ages, people have worked to keep their personal spaces clean for millennia.

Before industrialization and the advent of indoor plumbing, however, these were all mere chamberpots or relied on gravity. Modern toilets only came into style when sewer systems became the norm in Victorian Britain and were linked to the homes of its middle class — but the technology itself is now nearly 500 years old.

While Queen Elizabeth I’s godson — and distant ancestor of actor Kit Harington — Sir John Harington created the first flushing toilet in 1596, it was engineer Thomas Crapper who popularized a more refined model in the 1860s. It’s no wonder that “going to the john” or “crapper” is still popular slang today, yet the full history of who invented the toilet is even more surprising.

What Toilets Were Like In The Ancient And Medieval Periods

Before every home in the western world had a flushing toilet, this amenity was exclusively reserved for the upper class. Ancient records from 2800 B.C.E. indicated that only the wealthiest of the Mohenjo-daro in the Indus Valley had wooden seats supported by brick, with chutes connecting the openings to street drains. 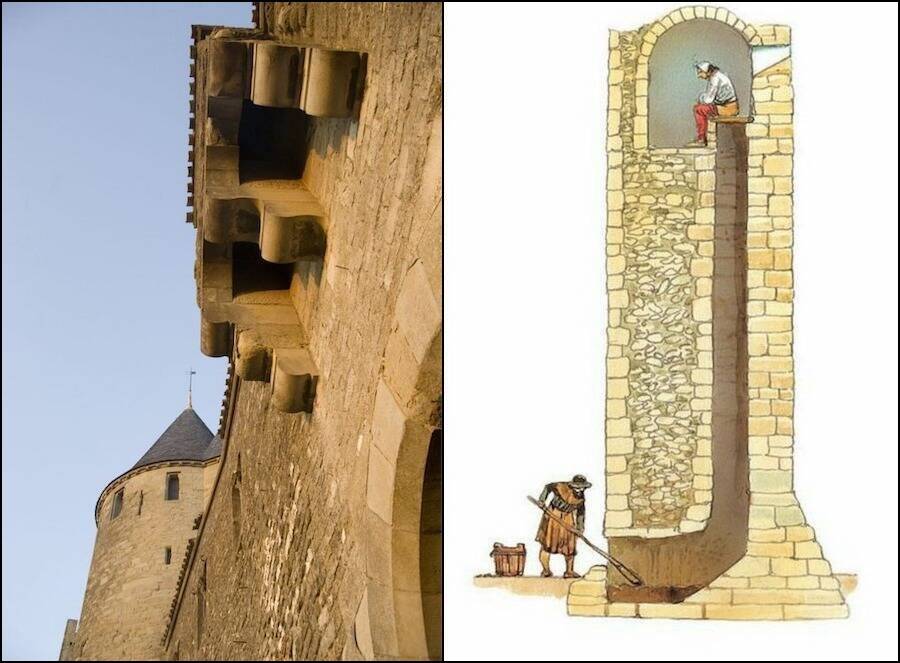 While these were highly advanced sewer designs for the time, recent excavations in northwest India have suggested even older systems dating to 4000 B.C. Ultimately, the most universally agreed-upon date for the first toilet is 3000 B.C.E. at a Neolithic settlement in Scotland, or in Greece’s Palace of Knossos around 1700 B.C.E.

These systems functioned primitively as mere openings in seats made of stone or wood, however, requiring users to flush their waste down chutes with water. They would set the stage for Ancient Roman toilets which were built over open sewers, with 144 public units by 315 C.E. England’s medieval toilet wasn’t too dissimilar.

While England’s poor simply collected their waste in buckets and emptied them onto the streets, those dwelling in castles used garderobes. These were rooms that protruded outwards from the castle walls for waste to fall directly into moats below or down interior chutes — and into a cesspit for so-called “gong farmers” to collect.

When Was The Toilet Invented?

English courtier and godson of Queen Elizabeth I, Sir John Harington described his innovative contraption in a satirical pamphlet in 1596. Titled “A New Discourse of a Stale Subject Called the Metamorphosis of Ajax,” it cleverly played on “a jakes,” a then-popular slang term for toilets — but the first flushable unit was no joke. 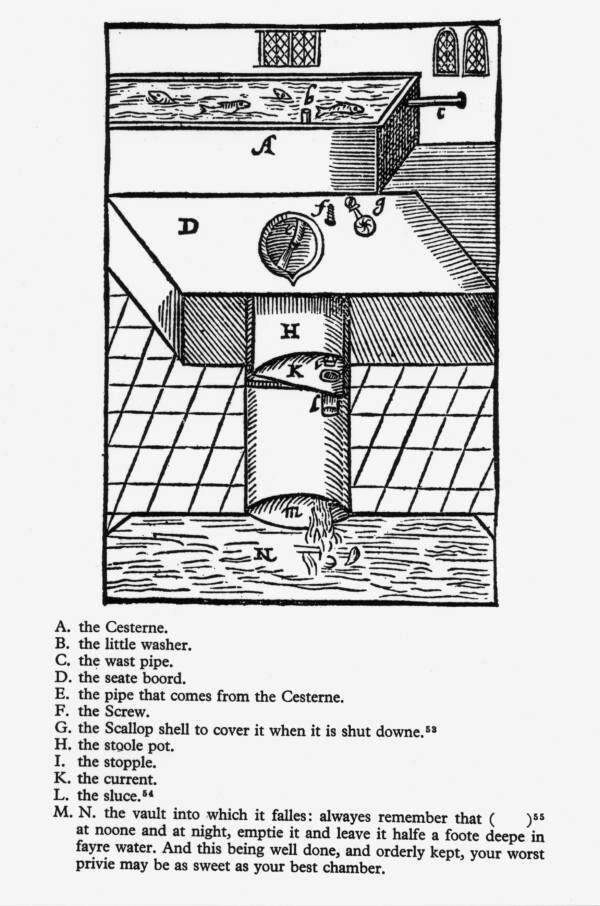 SSPL/Getty ImagesThe workings of Harington’s toilet as detailed in his 1596 pamphlet.

Harington’s design required an oval bowl lathered in wax, pitch, and resin, that measured two feet deep. The fortifying substances made the bowl waterproof for the water that would be fed to it by a raised cistern. This system required 7.5 gallons of water — needed to be used about 20 times before a flush.

While he installed one working model at his home in Kelston and another in Queen Elizabeth’s Richmond Palace, the Ajax was designed with a downward valve. This allowed the stench of waste and odor from the sewers below to flood the bathroom it was installed in. It would take more than a century to be refined.

Harington’s design had yet to take off but was further improved by inventor Joseph Bramah, who added a hinged flap in the toilet bowl a few years after Cumming’s additions. It was in the mid-1800s, however, that the so-called “water closets” truly took off — with the works of a simple plumber and an ambitious engineer.

Who Invented The Toilet?

In 1851, plumber George Jennings installed the first public toilets in London’s Hyde Park. Situated at the Crystal Palace, they cost one penny to use and came with a towel, comb, and shoe shine. The Great Stink of 1858 brought warm weather that heated the waste in the Thames, and Londoners demanded modern solutions. 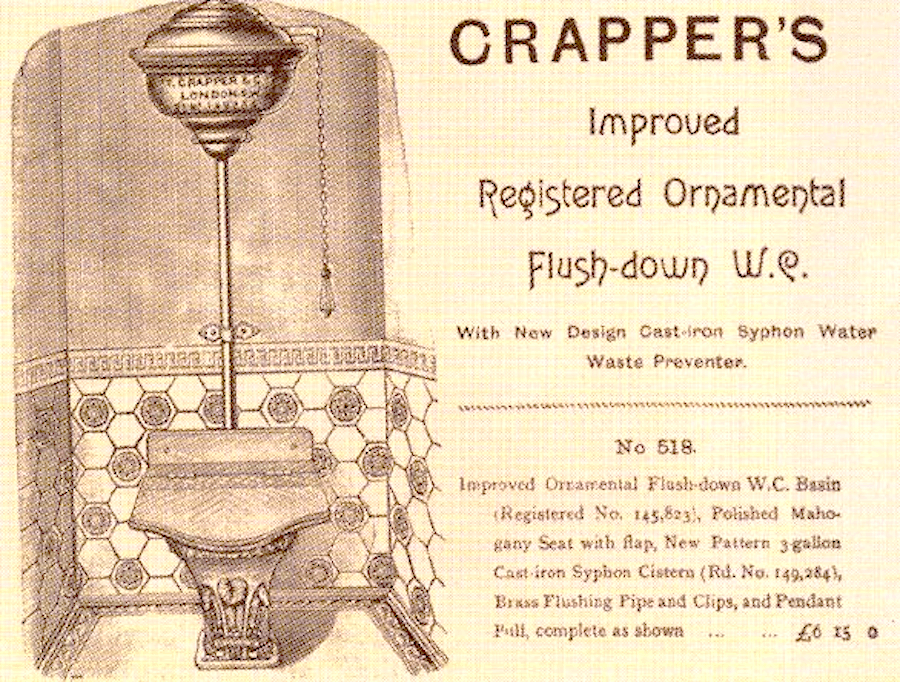 With most middle-class homes in Britain holding flushing toilets by the late 1850s, Thomas Crapper took advantage. While a tale of him walking from northern England to London at age 11 to be a plumber was likely a myth, he did become an engineer who built, mass-marketed, and exhibited his toilets during this time.

Commissioned by Prince Edward (who would become Edward VII) to build lavatories in 1861, Crapper’s models were standardized across the royal palaces of England. When London’s working sewers were finally linked to these modern flushing toilets in the 1880s, the odor-free use of toilets as we know it was born.

Ultimately, both Harington and Crapper were heavily credited for their work. As Elinor Evans wrote for BBC History Magazine, the latter had his name live on for centuries due to the mere adoption of his last name by American soldiers during World War I.

“When U.S. soldiers were based in England in 1917 they probably saw cisterns stamped with ‘T Crapper in some public toilets, and may have taken the word ‘crapper’ home with them,” wrote Evans. “Certainly, Cassell’s Dictionary of Slang records the word ‘crapper’ as a synonym for toilet, in use from the 1920s.”

After learning about who invented the toilet, read about some gross facts about public toilets. Then, learn about the Groom of the Stool or royal toilet attendant.