Meet The Thylacine, The ‘Extinct’ Tasmanian Tiger That Some Believe Is Still Alive

The last captive Tasmanian tiger died in 1936, leading experts to believe that the thylacine had gone extinct. But recent sightings claim otherwise.

The thylacine, also known as the Tasmanian tiger, was a carnivorous marsupial whose resemblance to a wolf made it among the most distinct fauna of Australia. However, it allegedly preyed on a variety of livestock, prompting European settlers to hunt the species to extinction.

But nearly a century after the last known thylacine died in an Australian zoo in 1936, rumors of thylacine sightings have made experts question whether the animal might still be around.

The History Of The Thylacine 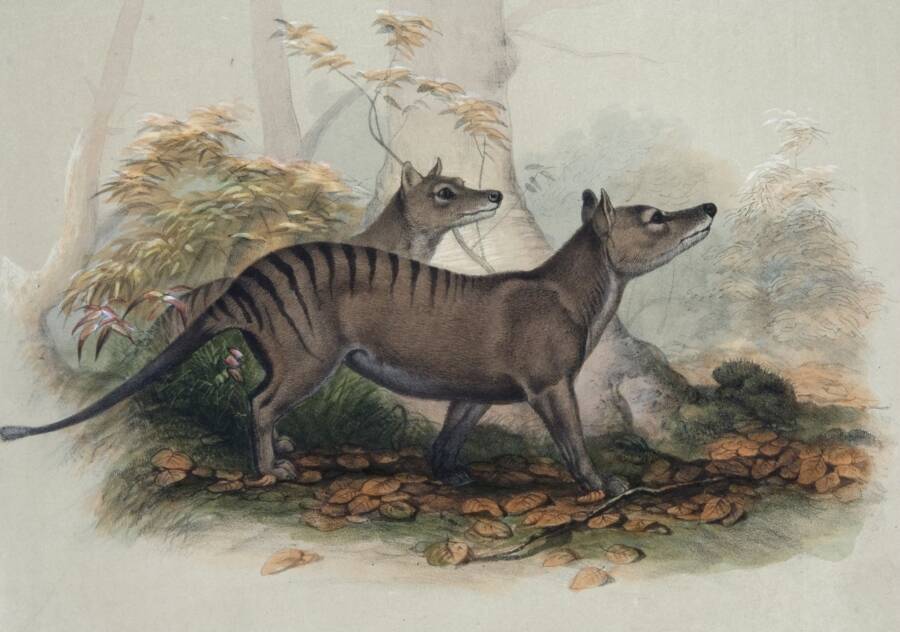 Leone Lemmer/Research Library at Australian MuseumAn early illustration of thylacines in the wild.

The thylacine, known by its full scientific name Thylacinus cynocephalus, was a carnivorous marsupial that made its first appearance 4 million years ago. At one point, it was found all over continental Australia, extending north to New Guinea and south to Tasmania. But for reasons unknown, it went extinct on Australia’s mainland about 2,000 years ago.

However, it persisted in Tasmania, making it synonymous with the small island south of the country’s mainland. But it was also a source of constant irritation to the European settlers who arrived on the continent in the 18th century.

“A lost object of awe, one more symbol of our feckless ignorance and stupidity.”

Scientists learned little about thylacines before they went extinct, but there are a few things we do know. We discovered that these striking predators — with large jaws filled with 46 powerful teeth — grew as long as six feet. This included the tail, which was stiff and thick at the base.

Thylacines, also called Tasmanian tigers, were distinguishable by their wolf-like appearance — though they were more closely related to the Tasmanian devil than wolves or tigers. Each thylacine was sandy yellowish-brown to gray in color and had about 15 to 20 dark stripes on its back.

Digitized rare footage from 1935 of a thylacine held in captivity.

Since Tasmanian tigers were marsupials, they reared their young inside natural pouches like koalas or kangaroos. Both male and female thylacines had back-opening pouches, but the ones on the males were only partially open.

Female thylacines gave birth to a litter of up to four joeys at a time and reared their young until they were at least half-grown.

Thylacines mainly hunted at night, either solo or in pairs. They preyed upon birds, small rodents, and even other marsupials like kangaroos. But after European settlers arrived, thylacines reportedly preyed on farmers’ livestock, which led to multiple bounties paid by the government to eradicate the species.

Between 1888 to 1909, more than 2,000 such bounties were paid. So unsurprisingly, a decline in the population was reported in the early 1900s. On top of the bounties, thylacines also faced competition with dogs, habitat loss, and even an epidemic disease that caused their population to shrink even more over the next few decades.

The last living thylacine on record was a captive male named Benjamin that died of exposure at a zoo in Hobart, Tasmania in 1936 — after being locked out of its shelter on a cold night. This was only two months after the species was offered government protection.

But nearly a century later, the extinction of the thylacine is still questioned.

Is The Tasmanian Tiger Really Extinct? 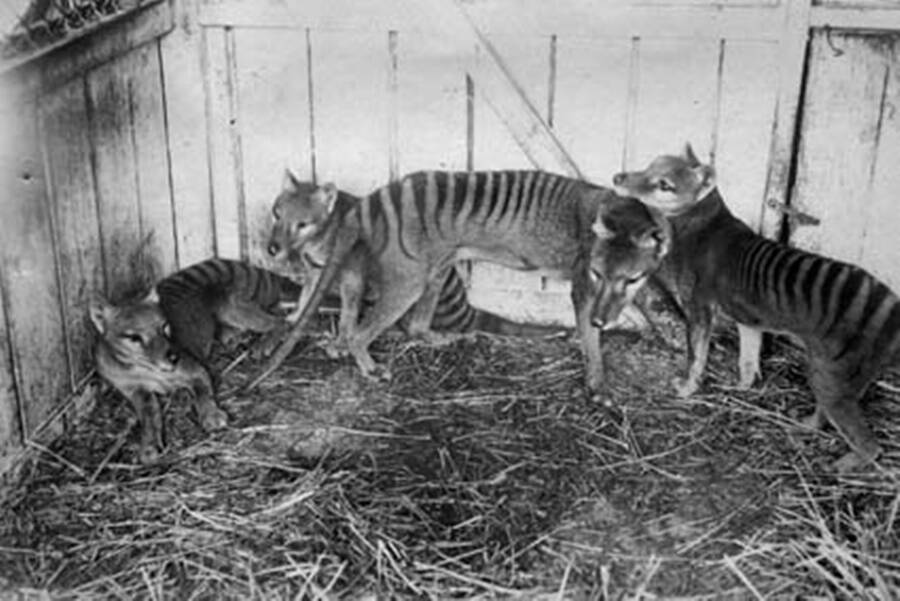 National Archives of AustraliaScientists began searching for more thylacines in the late 1930s.

Although the thylacine was believed to be extinct after 1936, a strange phenomenon emerged after the animal’s supposed eradication. Locals slowly began to report hundreds of thylacine sightings, both in Tasmania and mainland Australia.

And in the 21st century, the number of alleged thylacine sightings has only risen.

In 2017, a group called the Booth Richardson Tiger Team (BRTT) held a press conference to release video footage of what they believed was a Tasmanian tiger caught on camera. But researcher Nick Mooney, the foremost authority on thylacine sightings, believed that the grainy video likely showed a large quoll. Still, more witness accounts emerged thereafter.

“I am accustomed to coming across most animals working on rural farms… and I have never come across an animal anything close to what I saw in Tasmania that day,” said one eyewitness in a 2019 report released by Tasmania’s Department of Primary Industries, Parks, Water and Environment. 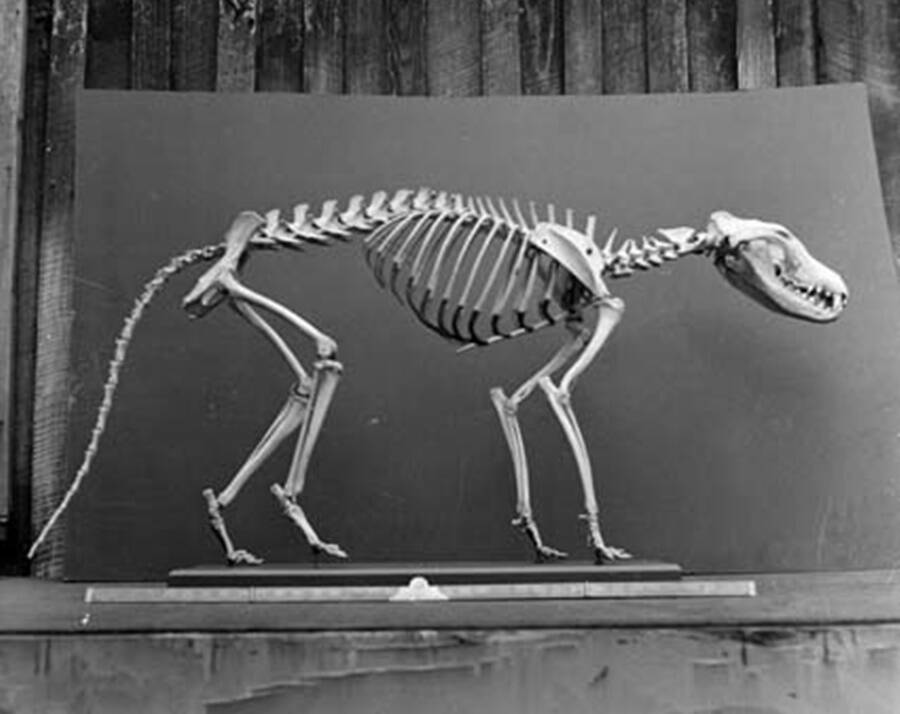 National Archives of AustraliaThe complete skeleton of a Tasmanian tiger.

However, like most accounts, the thylacine sightings in this report lacked hard evidence to corroborate their claims.

So it’s difficult to say whether the thylacine is extinct or still alive. Skeptics contend that these sightings were simply misidentified animals whose appearances were distorted by “contaminated memory.”

But researchers also deem it presumptuous to draw definitive conclusions when most of our planet has not been studied. After all, Tasmania contains dense pockets of vegetation that could easily shield an animal like the thylacine from being spotted by the island’s human inhabitants.

The abundance of eyewitness accounts has spawned specialized groups dedicated to tracking down the Tasmanian tiger and even compelled the government to equip park rangers with “evidence kits” in case of an encounter with a thylacine.

Meanwhile, some farmers in Tasmania have taken it upon themselves to set up trail cameras and collect their own evidence — like strange carcasses — to investigate whether thylacines are still around. 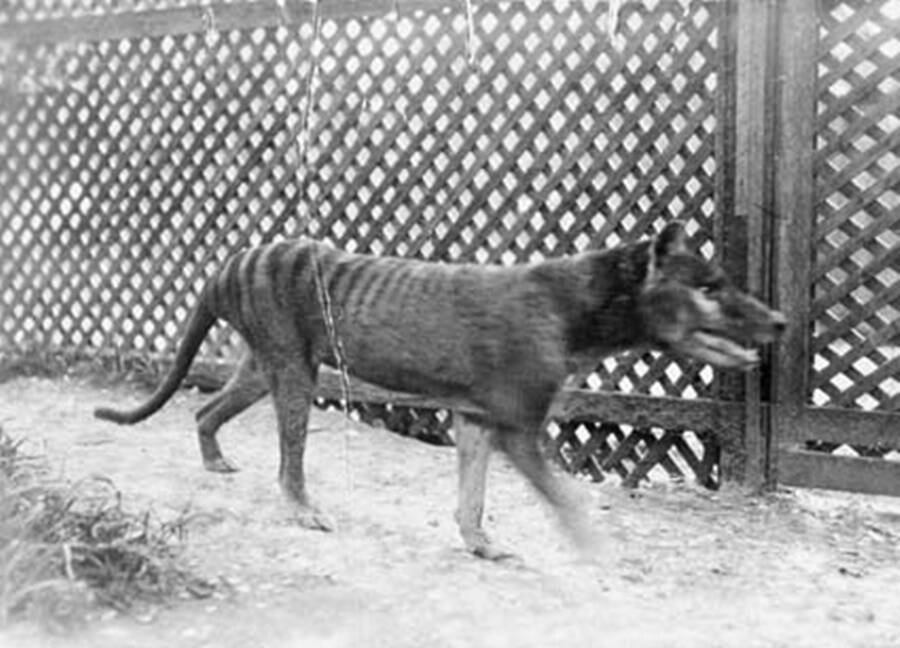 National Archives of AustraliaTheir extinct status continues to be debated by researchers and amateur sleuths.

But even if they are gone for good, some experts have expressed interest in trying to bring them back. In 2017, scientists successfully sequenced the genome from preserved specimens of the animal. And by 2018, some experts said that a gene-editing tool known as CRISPR might be able to recreate a genetic blueprint of the animal.

But others in the scientific field question the ethics of bringing back an extinct species, condemning the experiments as more human intervention that could prove dangerous.

So far, the status of the thylacine remains inconclusive, though the animal is still considered “functionally extinct.” As Mooney, who is neither skeptic nor believer, contended, “I don’t see the need to see an absolute when I don’t see an absolute… Life is far more complicated than people want it to be.”

Now that you’ve read up on the mystery of the Tasmanian tiger, learn about de-extinction: the who, how, when, and why of bringing back extinct species. Then, find out why giraffes are on their way to a “silent extinction.”